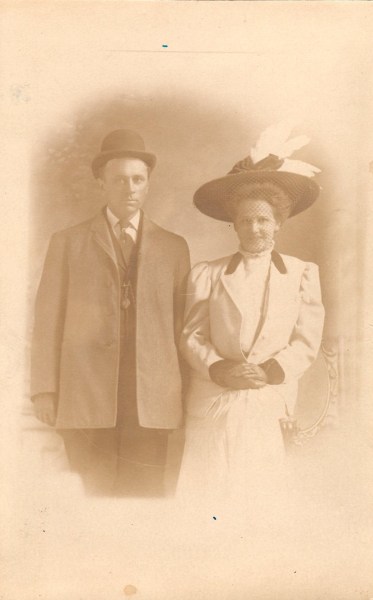 Image: “Front of a Picture Postcard Depicting a Couple in Old-Fashioned Dress,” photo by Alice B. Clagett, CC BY-SA 4.0 … DESCRIPTION: The picture is on the front of a postcard. On the back of the postcard was the caption “Hilton & Mitchel Studios, So Carolina Ave, Broadway, Atlantic City, N.J.”

Image: “Front of a Picture Postcard Depicting a Couple in Old-Fashioned Dress,” photo by Alice B. Clagett, CC BY-SA 4.0 … DESCRIPTION: The picture is on the front of a postcard. On the back of the postcard was the caption “Hilton & Mitchel Studios, So Carolina Ave, Broadway, Atlantic City, N.J.”

Here is a video about my discovery many long years ago of a love letter written just after the Civil War. At the end of the video, after describing the scene where I made the discovery I read the letter. There is a Summary after the video.

END_OF_DOCUMENT_TOKEN_TO_BE_REPLACED 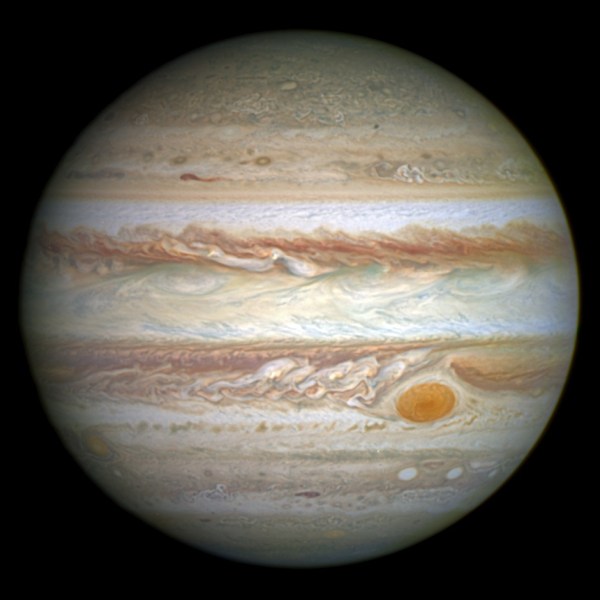 This is a first contact channeling and commentary to do with Jupiterian Subterranean Beings – beings from the planet Jupiter – who have colonized Earth. The conversation I had with them was amongst those, some of the Martian Bacterial Colonists of Earth, a possible Reptilian with flight capability, and me. Other Star Races are features in the blog as well.

END_OF_DOCUMENT_TOKEN_TO_BE_REPLACED

I have an incarnational memory of being a woman looking like the woman in this photo, only 10 or 15 years older than she … 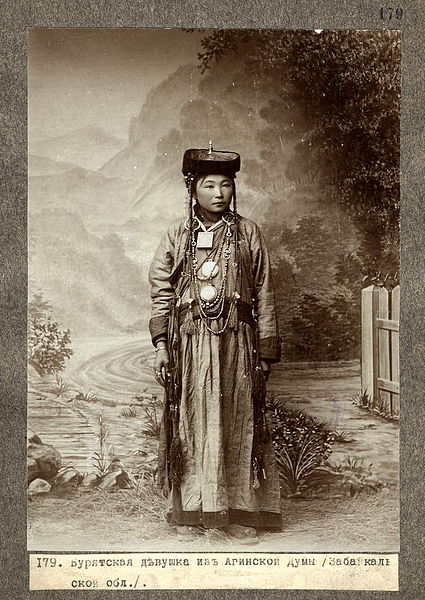 Image: “A Young Buriat [Buryat] Woman from Aginskaia Duma, from Novosibirsk State Museum of Regional History and Folk Life, 1900s, in Wikimedia Commons … https://commons.wikimedia.org/wiki/File:A_young_Buriat_woman.jpg … public domain … {{PD-US}} – U.S. work that is in the public domain in the U.S. for an unspecified reason, but presumably because it was published in the U.S. before 1926 … LEGEND: ‘I79. Buryatskaya debushka iz Aginskoi dumi / Zabaikalckoi obl’ (‘Buryat girl from the Aginsk Duma / Transbaikal Region’).

Image: “A Young Buriat [Buryat] Woman from Aginskaia Duma, from Novosibirsk State Museum of Regional History and Folk Life, 1900s, in Wikimedia Commons … https://commons.wikimedia.org/wiki/File:A_young_Buriat_woman.jpg … public domain … {{PD-US}} – U.S. work that is in the public domain in the U.S. for an unspecified reason, but presumably because it was published in the U.S. before 1926 …

As well, I remember standing on the Chinese mainland near the northern Sea of Japan, wearing clothes like those in the photo. I recall my husband was off on one of many long treks to get … whether by theft or by barter … more gold for my family. I kept the family fortune safely round my neck, while he risked his life in his wanderings. I felt sure my husband would return (though many a husband did not, in those days). I sense my memory was from a time much earlier than the date of the photo, which I take to be late 1800s, soon after photography was invented.

The distance from the Sea of Japan to Lake Baikal in Eastern Siberia (Russian republic of Buryatia and Russian Irkutsk oblast or province) is about 1,600 miles. In those days, it seems likely to me that very long treks were not uncommon amongst the people who lived from 1400 BC to 1600 AD, and maybe later on as well.

In the same way, the ruthless Chude (‘Chud’ or Tchude’) raiders from Estonia, Karelia, and Northwestern Russia must have trekked 600 to 1000 miles (depending on whether they were able to cross water, or had to skirt round it) to prey upon the Sami, the nomadic hunter-gather reindeer herders of Norway, Such is the setting for the 1987 Pathfinder film, which memorializes the heroic exploits of a young Sami man in about 1000 AD. For more on that, see Link: “Pathfinder (1987 film), in English Wikipedia … https://en.wikipedia.org/wiki/Pathfinder_(1987_film) ..

In more recent times there was Álvar Núñez Cabeza de Vaca, a Spanish explorer of the New World, who was shipwrecked on the Western shore of Texas in 1528 AD. From then till 1537 AD he and a few others traveled barefoot through the uncharted Southwestern part of what was then a land full of hostile Native Americans, and on to Mexico City. That was a distance of 2,400 miles. –from Link: “Álvar Núñez Cabeza de Vaca,” in English Wikipedia … https://en.wikipedia.org/wiki/%C3%81lvar_N%C3%BA%C3%B1ez_Cabeza_de_Vaca ..

It seems to me within reason that the Mongolian husband of my incarnational memory might have trekked the 1,600 miles from the Sea of Japan to Lake Baikal, and have brought back glowing reports to my people, who then might have undertook the arduous journey to that beautiful lake district, where they are still found today.

Here is another of my ‘perilous tales’. These are dangerous events, whether psychical or physical, that have occurred in my life in my life (but thankfully, not in very recent times).

I was just now thinking today about the most curious instances of ‘swooning’ that I experienced in the years 2012-2015 when I went to the meditations of a neo-Hindu group in West Los Angeles and also in the Wild West. I had never ‘swooned’ before, but I ‘semi-swooned’ so many times during those meditations that I finally drew pictures of the events that took place in the Wild West …

END_OF_DOCUMENT_TOKEN_TO_BE_REPLACED

Compiled and published on 21 March 2020; republished on 29 March 2020
Happened on 26 November 2014, the day before Thanksgiving 2014. There had been a light snowfall that day, and as I recall, more was on the way for the following day.

STORIES BY ALICE: MY LAST VISIT HOME, FOR THANKSGIVING 2014

I recall on my last visit home, for Thanksgiving 2014, I was staying with my uncle Frank Marbury Clagett, since deceased. I was there for Thanksgiving, and to visit around where I used to be in my childhood … where I had grown up, in the country near the small town of Upper Marlboro, Maryland, which is right close to Washington, D.C.

When I was growing up, my father worked in downtown Washington, D.C., and commuted back and forth to our home near Upper Marlboro daily. That place where we lived was across the road from Ingleside, my Grandmother Clagett’s farm, where my father’s brothers Frank Marbury Clagett, John Douglas Clagett, and Robert Joseph Bowie Clagett lived with my grandmother Alice Delores Clagett Clagett when I was quite young.

Adjacent to their farm was Keokuk, the farm where two of my great uncles, George Maxwell Clagett and Guiger Harry Clagett, and Uncle Gui’s wife Margaret Clagett. There is more about them here …

Citation: “The Clagetts of Keokuk,” by Elizabeth Clagett Clark, 10 June 1986, self-published, out of print.

I remember I liked my great uncles and great aunt very much, and how kind they were to me.  Uncle Guy and Aunt Margaret passed on in my early youth, leaving only Uncle Max there. Then my uncle Marbury’s twin brother George Guiger Clagett and his wife Helen Clagett moved in; they had a son Richard.

Next door to us was the farm owned by Commander and Mrs. Justin Miller, who were distant relatives of ours. And elsewhere along the road on which we lived were the farms of people who, while not related, were well known to us, and with whom we were on good terms.

A few miles north along the Ritchie-Marlboro Road was Concord, the farm where my mother Katherine Berry Clagett grew up …

On my trips back home to Upper Marlboro I would stop by those places I remembered from my childhood, along with the since deserted Marlboro Elementary School I attended in first grade, which is across from the Post Office and next to the tomb of Dr. William Beanes …

As well, I would visit the graveyards where the mortal remains of those of my family now passed on were laid to rest …

My father was a Catholic, as were his Clagett kin. My mother and her kin were Episcopalian, and so on my yearly journeys home I would visit the places where she had attended church. These were St. Barnabas’ Episcopal Church in Leeland, Maryland, which she attended in my early childhood …

… and Trinity Episcopal Church in Upper Marlboro, Maryland, which she attended in later years …

STORIES BY ALICE: SANCTUARY FROM THE DEMON REALM AT TRINITY EPISCOPAL CHURCH

As it happened, Trinity Episcopal Church was just across the road from where Uncle Marbury lived in Upper Marlboro, a fact integral to the story I am about to tell …

On that, the most recent of my trips home, for Thanksgiving 2014, I was plagued at night by the Demon realm. I cannot put forth the why or where of it, but the fact is that demons would swarm round me at night when I was there.

I recall one night during my five-day visit, when all that became just too much for me. In the early evening, I trekked across Main Street, and round to Church Street, where my mother’s Trinity Episcopal Church was located.

As I neared the church, I began to feel a greater and greater sense of sanctuary. I walked up the brick walk, past the graves and tombstones of my mother’s ancestors. A cold wind was whistling round me, and the Darkness rustled down amongst the leaves of the holly trees on the front lawn of the church … 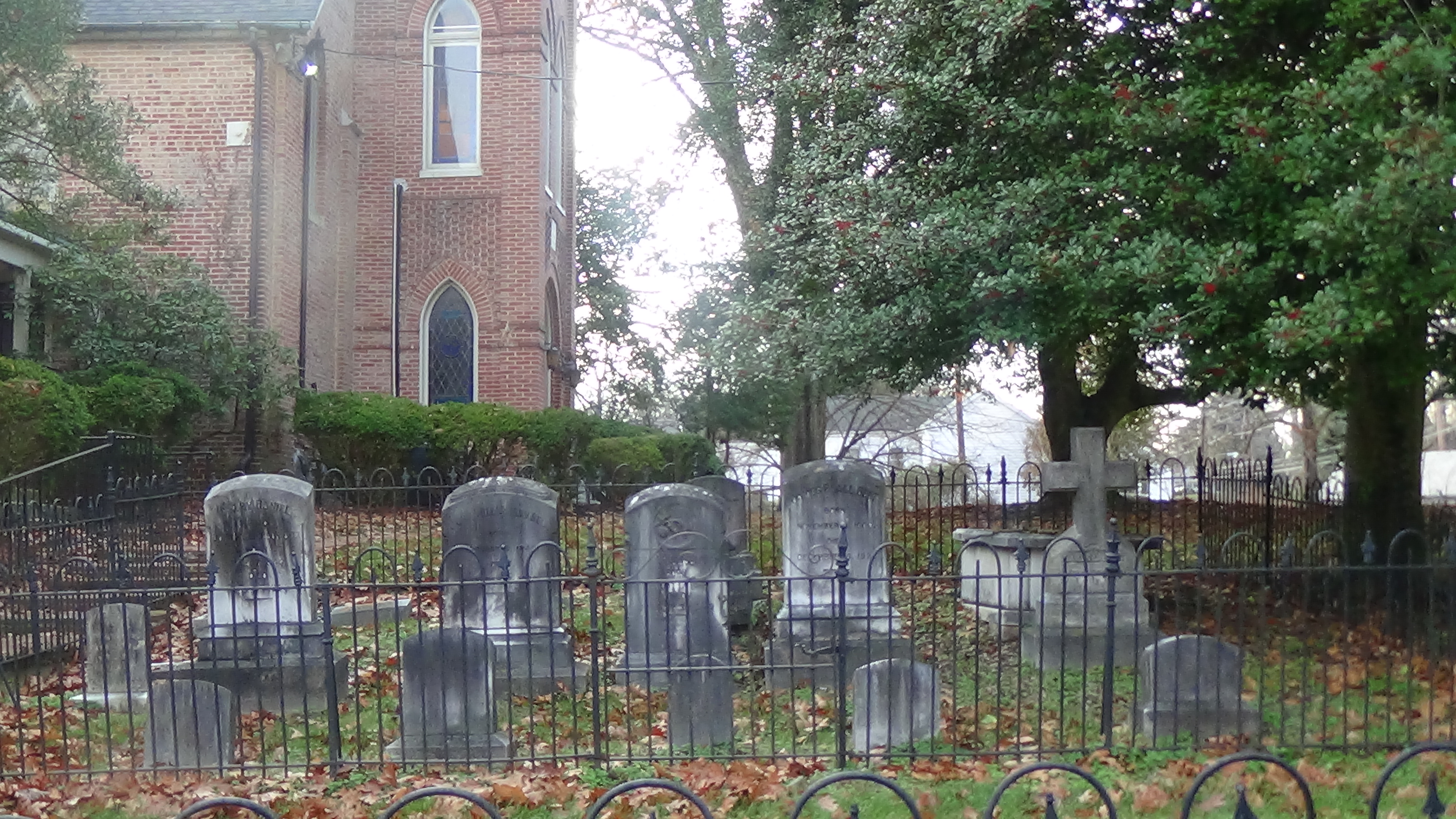 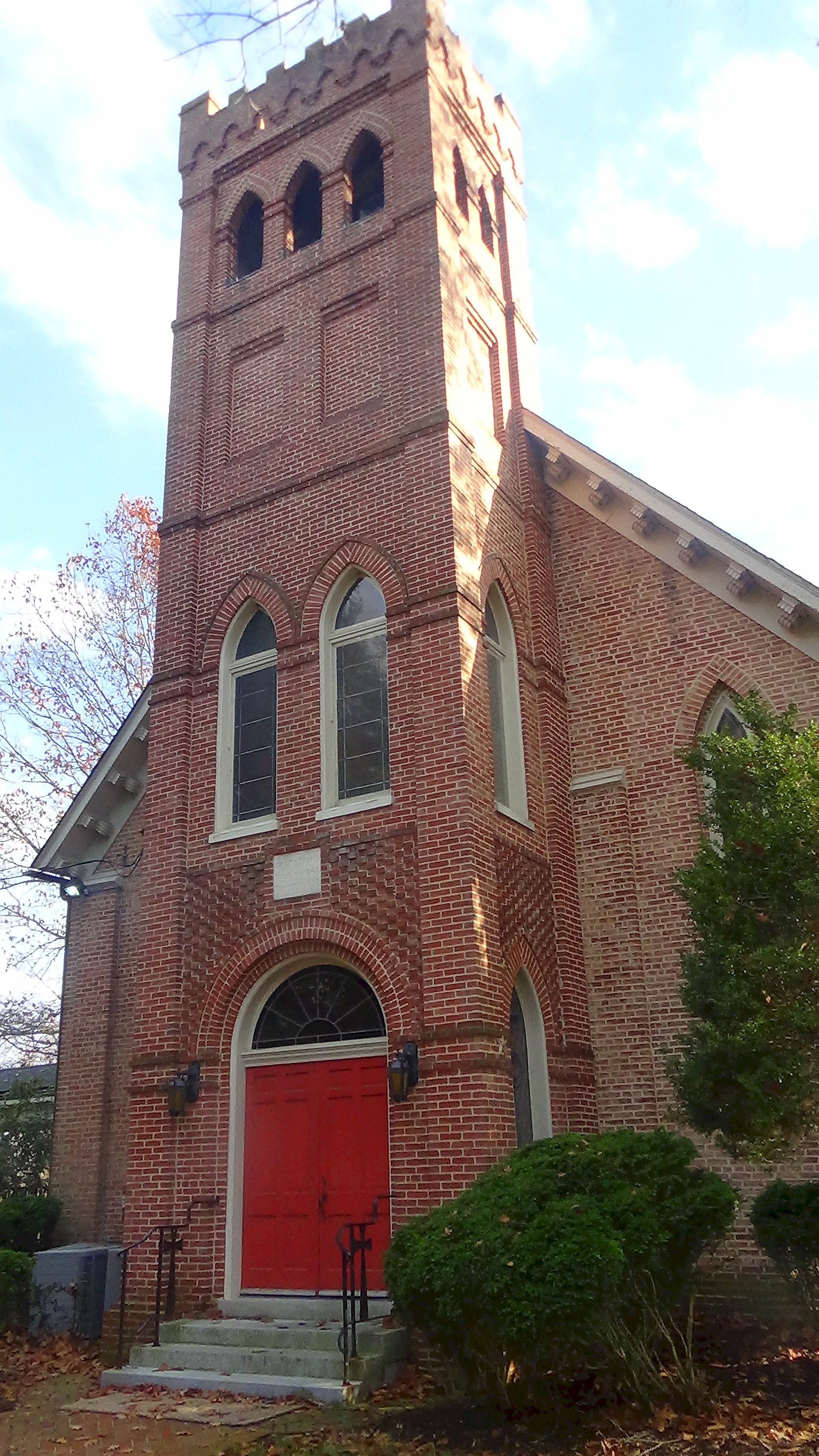 As I walked up those stairs, the demons pursuing me were repulsed by the Light of faith abiding there. They flew up howling into the sky, and then were gone away.

For some time I sat next the front door of the church, which shielded my back from the cold wind. I was listening for the return of the demons, but they did not come back. I was safe there, saved through my mother’s faith, and the faith of the minister and the people there, from the deepest Darkness ever to pursue me in this lifetime.

That is why I recommend to my reader: In times of deepest despair, seek sanctuary on Holy Ground. If there is a church nearby, even if you cannot enter the church door, you may find, as did I, that the steps of a church offer safety of Spirit, and of physical form. Here is a song I wrote about that … 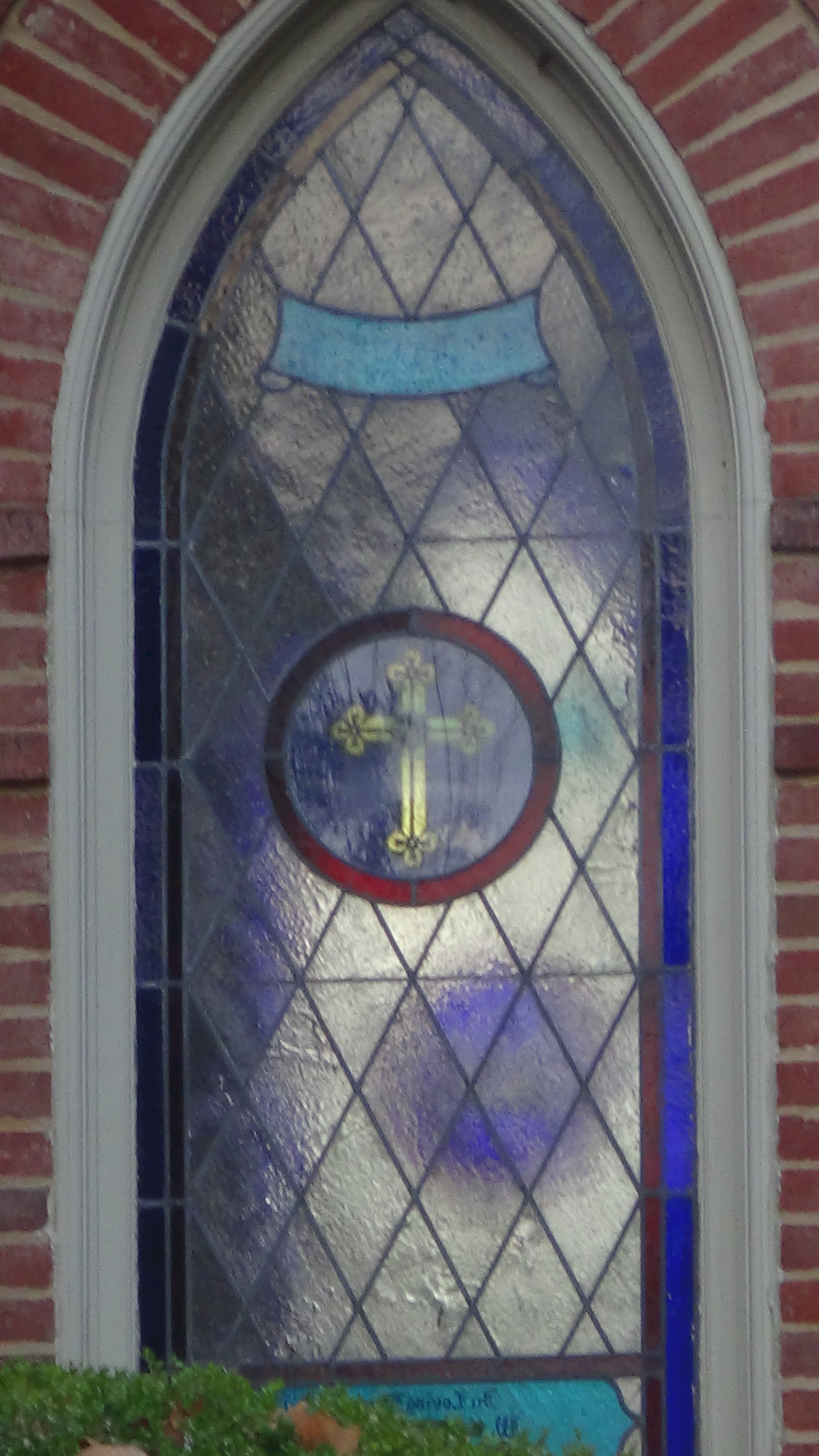