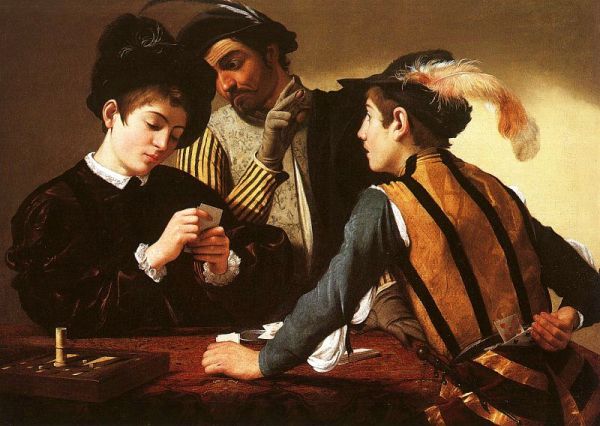 Image: “The Cardsharps,” by Caravaggio, circa 1594, in Wikimedia Commons … https://commons.wikimedia.org/wiki/File:The_Cardsharps.jpg … public domain

Image: “The Cardsharps,” by Caravaggio, circa 1594, in Wikimedia Commons … https://commons.wikimedia.org/wiki/File:The_Cardsharps.jpg … public domain

This is a collection of astral stories I encountered that involved the catastrophic childhood case study of ‘The Doc’, a very intelligent man who lived by his wits and earned his Doctorate in the school of hard knocks.

END_OF_DOCUMENT_TOKEN_TO_BE_REPLACED

I wrote a long blog some time ago, that had had two sections I feel might be worthy of excerpting as separate blogs, with the thought that they might otherwise be overlooked. Here is the second of the two …

HOW CAN AMERICANS SUBDUE THE STRIDENT BARK OF THE MAFIA ON THE PSYCHIC PLANE?

To the psychically aware, the stance of the Mafia … its bearing in the psychic realm … has to do with its operating procedures. Thus we hear, on the psychic plane, constant allusions to murder, theft, rape, all kinds of law-breaking, narcissism, antisocial humor, and the like. These are earmarks (and to the psychic, quite an astral earful!) of the thought processes of the Mafia.

I feel it must be that the thoughts of Mafia members are full of feral emotions, and that it is the weight of these emotions which makes their thoughts so loud, on the psychic plane.

Thus I advise the members of small towns in the United States: If, as you become more sensitive during the process of Ascension, you begin to feel that you are hemmed in, astrally, by such thoughts and emotions, then know that the Mafia is operating in your town.

You and your town council must take the necessary steps to ban these people and their operations from your town, so that they may not injure your family and friends.

I advise against people who not quite elderly or else facing their final days signing a Declaration of Final Illness form that says it is ok to ‘pull the plug’ after a certain number of days.

When people do that they lay themselves open to being forcefully and apurpose recreational-drug overdosed by a confidence person, resulting in drug coma, and then speedy dispatch at a colluding healthcare center. The object of the con would be to murder you and swipe your goods.

If you have such a Declaration of Final Illness already set up with someone who intends evil, there will be no end of trouble about it, as the mal-doer has in hand your original form, and will not be parted from it, even if you send round a legal revocation form. That is in hopes the con-murder could be consummated and the revocation overlooked.

As people become terminally ill, or are in their 90s, signing such a form would make sense, if they have a child dedicated to their care; otherwise, I feel it to be ill advised.

I also advise against setting up a Revocable Trust, as the addition of a one-page addendum by a confidence person could change the beneficiary to himself or his confidence gang leader. So then you would have a double whammy: Your death through OD against your will, and a way to transfer your estate to the confidence man or his gang.

I am not trained as a lawyer, and that is something to take into consideration. This is just something I intuit about confidence men and one of their MOs.

A lawyer would likely give you the opposite advice. But then, how many honest lawyers are completely up-to-date regarding the con games of ruthless men?

DANGER FOR HIKERS AND CAMPERS IN RURAL VENTURA COUNTY AND LOS ANGELES COUNTY?

In the last few years, I have clairly listened to several astral stories while exploring the byroads and hiking trails of Ventura County north of Ojai and of Los Angeles County north of Santa Clarita. What intuition very strongly tells me is that those of us who hike and camp in rural areas of Ventura County and Los Angeles Cunty are in danger of thefts from our parked vehicles (including theft of electronics, personal items, and tires); theft of the vehicles themselves; burglary of equipment from our tents; and apparently possible violent loss of our lives so that thieves may market our stolen goods and cars without being caught out.

I feel what intuition tells me is greatly increased danger in this regard may have to do with higher water costs for Ventura County and Los Angeles County rural residents, the need for food and firewood for their homes, and the need for feed and water for their livestock. It seems to me reasonable, if these crimes are occurring, to try to find out if local Ventura County and Los Angeles County residents have a hand in it.

It is possible that, because of increasing economic stresses in California, residents of small towns and of rural areas … including their law enforcement agencies … may be beginning to band together to protect themselves from outsiders, and to profit by occasional raids on tourists and visitors such as I describe above.

I ask that law enforcement for counties adjacent to the City of Los Angeles reach out, each to the other, so as to form as close bonds of cooperation and information exchange as possible. In that way, we can keep Southern California strong and safe for everyone.

The above concerns are derived from intuition and clair perception; they cannot be said to be factual in any regard unless facts are found that support the ‘astral intel’.

Here is an astral story about a felon MO (modus operandi) to do with injury to women, that I heard during my 2015 summer stay in Durango …

INTRODUCTION: A STORY BY ALICE ABOUT SUMMER IN DURANGO

There is another type of Take-Down that has to do with felons, and the type of life that a felon leads, especially after having been in prison. I base the below on an astral story I heard over several months in 2015 while spending summer vacation in Durango, Colorado.

I recall going into one of two convenience stores near my summer rental one afternoon. There was a cashier behind the counter … a man I had seen there before. Another man walked into the store; he had on his ankle a house-arrest bracelet of the sort that is issued as an alternative to incarceration.

This was the first such I had seen, although I had read about them. As I approached the cash register with my ice cream. I heard the cashier ask the other man where he got his anklet, and for what crime. Then he indicated he had one too.

I was quite shocked. Could it be that there were so many felons in Durango that store owners had no choice but to hire cashiers who wore house-arrest bracelets? I began to feel that Durango must be full of felons, and that is when I started to dream about the below astral story.

At the time it seemed the story was targeting me personally. As nothing happened on the physical plane to prove or disprove the astral story, my guess is that I personalized a feeling I encountered in the ‘astral airs’ of the Wild West, and that some other hapless woman … maybe in Durango, maybe elsewhere … must have been the intended target.

Here is the leadup to the story …

THEMES IN THE LIVES OF FELONS THAT DETER REHABILITATION

Oft-times, I feel, because of the rough things that happen in prison, a felon who comes out of prison will have a tendency towards sex work to make a few extra dollars … maybe to buy some drugs, or for whatever reason. So there are these two themes in the lives of felons: sex work and drug use.

On the clair plane, I also see these themes in the lives of felons: Quite frequently. M2M,  because most felons are men, and in prison, lots of times, rape must be going on. And so a habit of M2M, or a breakdown of a preference for the M2F types of relationships might occur.

What that leads to is misogyny … hatred of women. It surely cannot be that this is always the case. But in a felon  who is torqued to the Dark in other ways, I feel that it sometimes happens.

On getting out of prison, that person might be looking for women, to take their money and kill them. He might feel angry at the world. And men might be perceived as too powerful to act towards in anger; so women might be the target of that anger.

TAKE-DOWN OF A WOMAN BY A FELON: A MODUS OPERANDI

Perhaps when felons leave prison there is a psychological evaluation. The ‘psych eval’ indicates that something maladaptive is going on with the felon; and an attempt is being made to reintegrate them into the mainstream.

Thus on leaving prison, I hypothesize, the felon might have in hand a ‘psych eval’ of himself. He might take umbrage at this evaluation; even bitterly despise it as the thinking of a ‘normal’ person who is just not with it, a person who does not know how to work the system in the manner the felon adeptly does. That might be the felon’s line of thinking.

Thus when the felon targets a woman that he wants to take down … Say, to murder, and steal money from … he might assemble false evidence purporting that his own prison-release psychological evaluation is in fact that of the targeted woman. (In the case of my Durango astral story, that woman, it seemed, was me.)

In psychological terms, this maneuver is called ‘projection’, but in law-and-order terms, it is fraud. Along the same lines, the felon who is setting up a woman for the fall might purport that the woman herself is a sex worker with a drug habit; he may project the qualities of his own life onto her.

If this ploy works, this is a Take-Down, both physical and financial. The whole life of the woman is taken away. The identity is removed. Bad reputation is substituted for a good reputation. And of course, the property of the murdered woman is also stolen.

CONCLUSION REGARDING THE FELON TAKE-DOWN

So that is a form of Take-Down by the Dark. It is difficult because a person who wants to live a saintly life, and upon whom all kinds of aspersions are cast … who is held in the light of calumny and slander … needs to have a very strong faith and footing and belief in God, and hope, and charity towards fellow man, in order not to lose the Light of God within their own body of Light when they suspect they may be so targeted.

I can say from personal experience of the astral burden, that it is a difficult test. It is rather like Christ’s test, you know? Christ made it through his doubts in the Garden of Gethsemane, and to full faith in God, but not without having a doubt or two. I had my doubts as well.

Thank God the astral rumors never solidified into physical fact. I returned to Los Angeles shaken, but unscathed. That is better than what happened to Christ, for sure. Thank goodness he underwent that test for all our sakes.