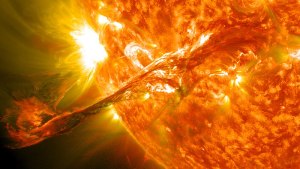 Heads up! There is a 20% chance of X-class solar flares today, and a 40% chance of M-class flares. Three sunspots are facing Earth right now … AR3181, AR3182 and AR3183. If solar flares occur, they will likely be Earth-directed. For more on this see “Space Weather” … https://spaceweather.com ..

If things on the astral plane start to get wild and wooly, I suggest taking a nap. I steer clear of the steering wheel at such times. I leave important decisions for another day.

That is all for now.

Alice B. Clagett
In love, Light and joy,
I Am of the Stars

Written and published on 8 January 2023

Here is a video on the CME high tide that has been scrubbing Earth’s noosphere clean of misqualified energies for the last few days. There is a Summary after the video …

This is a report on the multiple CMEs that have been glancing past the magnetosphere of Earth the last few days, and are anticipated to continue along those lines for today and tomorrow.

I was not expecting too much; so far, just a series of Kp=5 alerts from “Space Weather” … https://spaceweather.com … because of the glancing effect and the M-class flare effect. No X-flares so far.

It is great good luck for Gaia right now … extremely good luck … and a blessing long awaited and happily received. Till next time, Dear Ones … 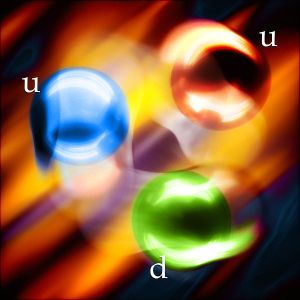 Image: “Two up quarks and one down quark spinning freely in a particle accelerators stream,” by Brianzero, 1 March 2009, in Wikimedia Commons … https://commons.wikimedia.org/wiki/File:Quark_wiki.jpg … CC BY-SA 3.0 UnportedUnported … COMMENTS: I read that protons and neutrons are made up of quarks; so protonfall might be full of quarks. So it seems to me. –Alice B. Clagett

NEWS FLASH! Word just arrived from Space Weather … https://www.spaceweather.com … that the Planetary K index has reached a level of 7. Quite an impressive geostorm is in progress. — 12 May 2021, 6:15 am PT

GEOSTORM IN PROGRESS. THINGS TO LOOK OUT FOR

END_OF_DOCUMENT_TOKEN_TO_BE_REPLACED

Written and published on 11 December 2020

This morning I read an explanation of the fizzle of a geostorm predicted to occur yesterday, and I realized the geophysical explanation I read about resembled what I clairly sense as Kundalini Arisen in my own aura. I see it may be possible to visualize the opposite effect of Kundalini Rising and Reverse Kundalini in human beings through an understanding of the opposite effect of north-pointing and south-pointing CMEs on Earth’s magnetosphere. Here is the scoop …

I read today in Space Weather … https://www.spaceweather.com/archive.php?view=1&day=11&month=12&year=2020 … about how the incoming C7-class CME, which was expected to create a geostorm of up to G3 magnitude, did not create a geostorm yesterday. Why was that?

According to Space Weather, when an incoming CME has a magnetic field that points south, then cracks open up in Earth’s magnetic field. From the International Space Station these cracks look like this … 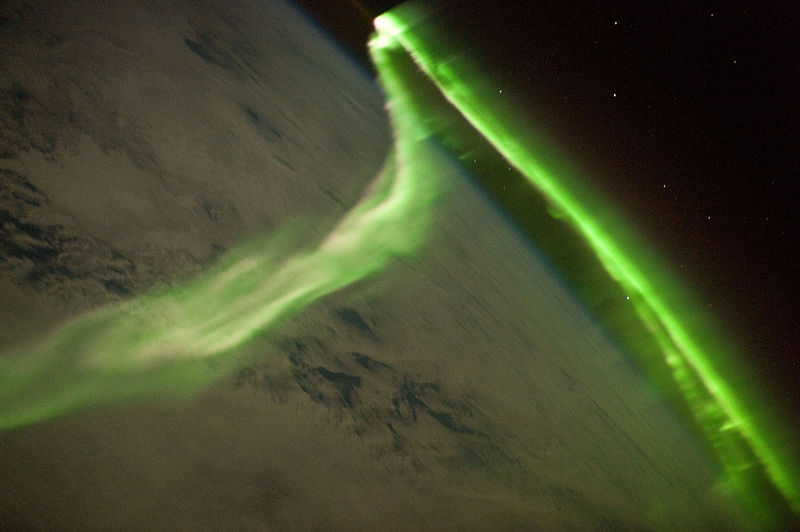 Solar winds then flow inside Earth’s electromagnetic field. These solar winds are what we view on Earth as auroras … 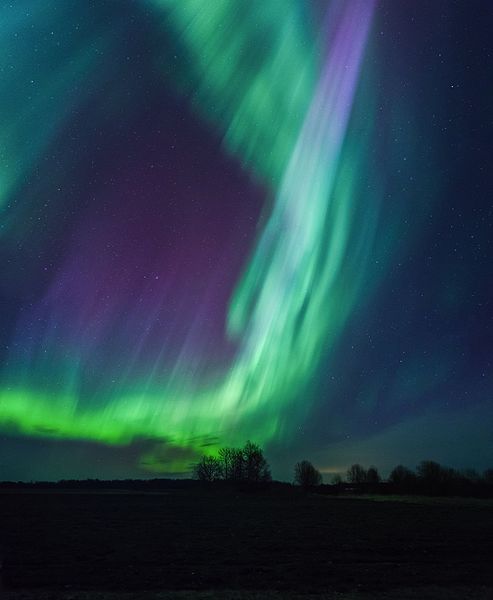 Contrarily, when an incoming CME has a magnetic field that points north, then cracks in Earth’s magnetic field are sealed up, and auroras cannot be seen at the North Pole.

Yesterday’s CME was north-pointing, and so there were no auroras. I gather from the context of the Space weather article that that the Geostorm and Kp indexes stayed quite low yesterday for the same reason.

There are yoga practices to support and enhance Awareness of the upward flowing and the downward flowing forces of the human kundalini. Their contrapuntal energetic emphases have for aeons fueled the argument in India of the celibate monks against those who practice the householder way of life, which in secular parlance we might term a preference, in the one case, for a life perhaps solitary or perhaps with same-sex preference; and the in the other case, a preference for a heterosexual lifestyle. As well, opposing constellations of personality traits occur with our choice of Kundalini Arisen or Reverse Kundalini as a spiritual practice.

Reverse Kundalini: Cracks in the Personality

For those who practice black tantra, the electromagnetic current through the hollow center of their EMF torus flows strongly downward. This strong downward-flowing energy I term Reverse Kundalini.

The experience of Reverse Kundalini is characterized by ‘antisocial’ personality … a personality that does not attract the friendship of other people … by bad luck and dearth of worldly goods, absence of enduring romantic liaisons, poor physical health, and negative states of mind. For more about that, see …

For those of us who practice kundalini yoga, the electromagnetic current through the hollow center of our torus flows strongly upward. This strong upward-flowing energy I term Kundalini Rising.

The experience of Kundalini Arisen is characterized by magnetic personality, luck and abundance in worldly affairs and in matters of the heart, a healthy physical body, and imperviousness to negative states of mind.

On reading the Space Weather description of north-pointing CMEs and how these smooth and seal cracks in Earth’s magnetosphere, I began to see, last night, now the experience of Kundalini Arisen might heal and balance the human physical and subtle bodies. It then became very clear to me how the practice of Kundalini Arisen might create such beneficial experiences in daily life.

To my mind, the salubrious Kundalini Arisen effects equate to a smoothness of the outer surface of the torus-shaped human electromagnetic field. Thus, to my mind, the effect of Kundalini Arisen in the human EMF equates to the effect of a north-pointing CME on Earth’s torus-shaped EMF. In both cases, I clairly see the rough edges of the outer surface of the torus smooth, uncracked, and not beset by the snags we clairly sense as malspeak or malware.

My experience of Kundalini Arisen, like my clair experience of a north-pointing CME last night, seals up the aura, especially above my own head, just as the skies above the North Pole last night were devoid of the EMF cracks that cause auroras.

When that happens, we can ask our Ascension Teams to seal off the transpersonal chakras above our heads. That will allow us to experience less clairaudience for the time being, so that we can consolidate and heal our personal energy fields. That is what happened to me last night. After doing the Basic Spinal Energy Series of Kundalini Yoga …

I put in a request with my Ascension Team for protection from excess clairaudience. The EMF energy they created above the top of my head was like a half-spindle about one and a half feet tall. The base of the spindle was joined to the energy of the top of my head, and the top was rounded. When that extra layer of EMF protection was in place above my head, then the clair chatter, which I frequently sense, gave way to silence.

I feel it likely, then, that clair chatter is like the type of noise that happens in the magnetosphere of Earth when auroras occur. Last night, the energies within my body became better aligned and more balanced when the spindle of energy above my head calmed the clair chatter.

In the same way, the north-pointing CME last night might have aligned and balanced Earth’s body of Light.

In India, many householders worship the sustaining quality of Lord Vishnu and his consort Lakshmi, or the feminine-masculine devotional quality of Radha-Krishna as aspects of God. On the other hand, hardened criminals are seen as followers of Lord Shiva, the destroying aspect of the Hindu Trinity, the ‘Trimurti’.

I ask those of my readers who are on the spiritual path to consider: What is your true Soul mission? What is it that you truly want to experience in this life? What action in the world rightly leads to your true Soul purpose?

See also … Link: “Kundalini Risen to Protect Against the Predations of Black Magicians,” by Alice B. Clagett, written and published on 25 July 2020 … https://wp.me/p2Rkym-jgo ..

Just after midnight (early this morning), my longer range sense of physical hearing became balanced out with my astral hearing for the first time in about 20 years. I could hear noises out on the street, which had seemed subdued to the point of being very hard to hear. Because of the astral-physical hearing balance shift I feel more grounded in the physical realm now.

I wonder if anyone else who is clairaudient has had a similar experience recently?

In the last week I have sensed the Light of Summer Solstice 2020 already flooding in to Earth in great waves of Incoming Light. I find this exhilarating to the point where it is difficult to get to sleep. One wishes to stay up through all the sunlight hours, yet nights during the time of Summer Solstice Light are full of a kind of peaceful joy, and well worth experiencing.

In addition, I note on Space Weather … https://www.spaceweather.com/ … that a second  Solar Cycle 25 sunspot has appeared this week. Although we are still in Solar Minimum, I feel strongly the welcome imminence of the Solar razzmatazz.

Coronal Mass Ejections will be doing the tango with Earth’s magnetosphere one day soon. I am looking forward to visits with the Hathors of Earth’s Solar Astral Planes as Earth’s EMF buffs up with the incoming Solar tide. I have been lonely without them! Hope you all get a chance to meet them as well, if you so desire!

For those that are new to the Hathors, here is more about them …