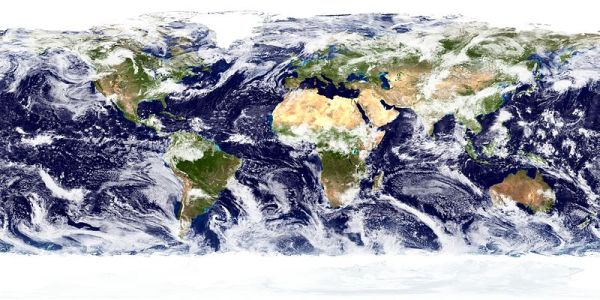 There is a conspiracy theory that the ‘near miss’ Killer X-flare of September 2017 actually did wipe out Earth, and that a crew of Star Beings is attempting to rehabilitate our Souls so that we can continue onward with our Soul journey mentally healthy. Every once in awhile I run across this conspiracy theory as a mental filter in the mind of a person who is sending me thought forms through telepathy.

Here is my take on that mental filter: First of all, it is just that … a thought form created, in this case, by Reptilian Star Beings, that is intended to hobble and cripple the emotional bodies of human beings, so they may be enslaved.

Secondly, in terms of multitemporal timeline theory, I posit that in September 2017 there was a burden of Reptoids (Reptilian-human hybrids) on Earth, and that the way forward for them was a spinoff into an Apocalyptic Awareness timeline in which Earth was destroyed by a Killer X-flare. The spinoff occurred, and these Lost Reptoid Souls are now experiencing an alternate reality similar to the Maldekian disaster that occurred aeons ago. Their Awareness, like that of the Maldekians until recent times, must be knit or glommed or tangled or ‘knotted’ together in a mass hysterical experience of Apocalyptic loss of our home world, Earth.

Even though that may be so, all is not lost for these Reptoid Souls. We Lightworkers and healers can, through the portal of the Now … the 10th Subtle Body … relocate these Lost Souls into their optimum timeline (if they are willing to let that happen). Here is the Activation of Light that will allow that to occur …

“Activation of Light for Earth Reptoid Souls”
Channeled by Alice B. Clagett
7 June 2021

Spirit to Team!
Optimize Timelines and Dimensions
Of all Earth Reptoid Souls.
For the All, through Free Will!

There has been another X flare … variously extimated as X8.2 to X20 … quite significant … at about 9 am PDT yesterday … it affected about half the solar system, which is unusual. There has been a ham radio blackout in the Americas since then; it 9is now subsiding. There is a mild radiation storm in progress. Because the flare happened as the sunspot turned away from Earth, SWPC predicts only a G2 geostorm. SWPC provides prompt alerts on space weather conditions:

SO calls it a ‘Killer X Flare’ … but fortunately it was not facing Earth directly. I feel it would have been a Carrington Event, rather than a planet killer, had it been footprinted to Earth.

EFFECT OF A CORONAL MASS EJECTION ON EARTH DEPENDS ON HOW EARTH-DIRECTED THE EJECTION IS, AS WELL AS ON HOW SEVERE THE GEOSTORM IS

The more Earth-directed the CME, the stronger the Earth effects. These effects incoude:

WAS YESTERDAY’S X-FLARE A ‘KILLER FLARE’?

The GOES X-ray flux for the flare was pretty dramatic:

However, the sunspot was departing Earth as it erupted: 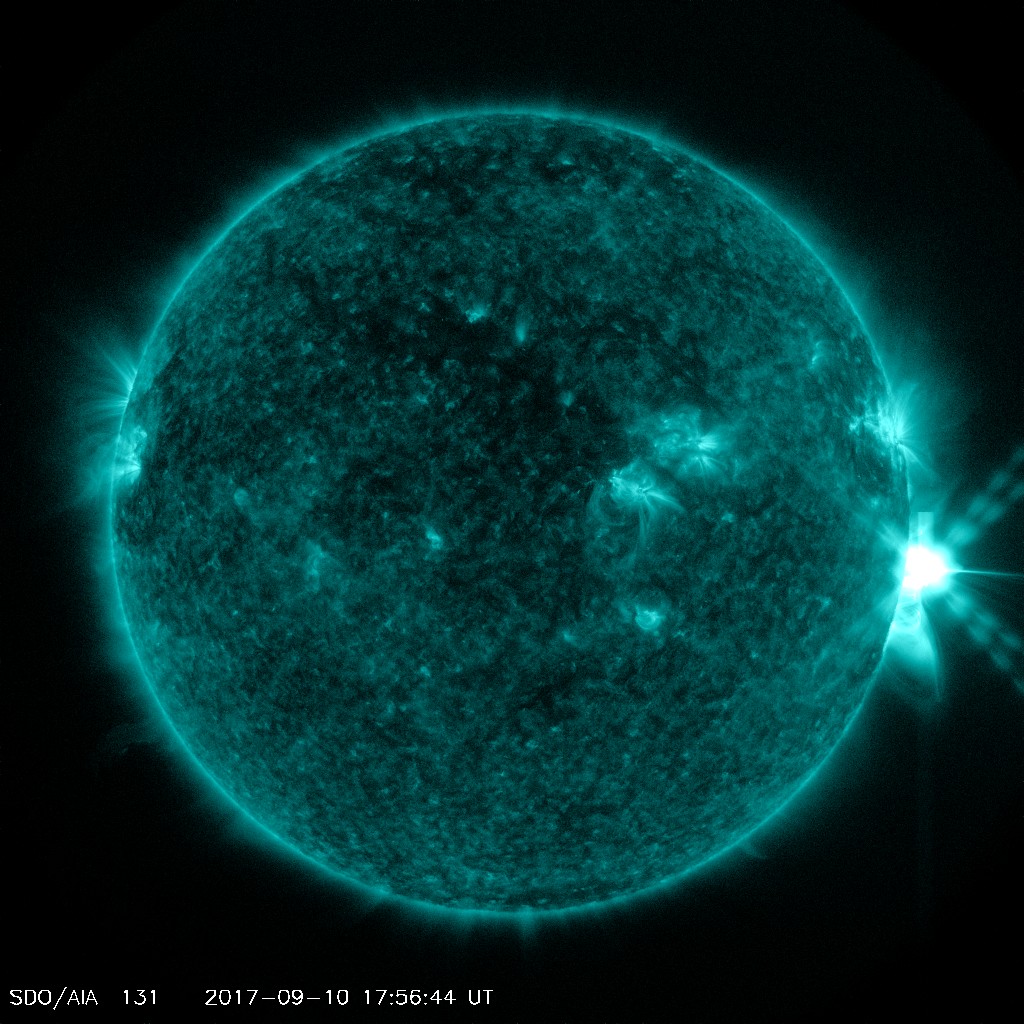 On the other hand, proton radiation from the eruption flew out on all sides of the sun, including, it looks like, a proton cloud headed towards Earth …

Image: 2017-09-10-space-space-coronograph-NASA, showing a proton cloud spewing out from the sunspot in all directions; public domain

Image: 2017-09-10-space-space-coronograph-NASA, showing a proton cloud spewing out from the sunspot in all directions; public domain

Space Weather News has noted that the ENLIL Spiral model below shows a CME blast that is more conservative than the satellite imagery, which shows a CME affecting more than half the solar system: 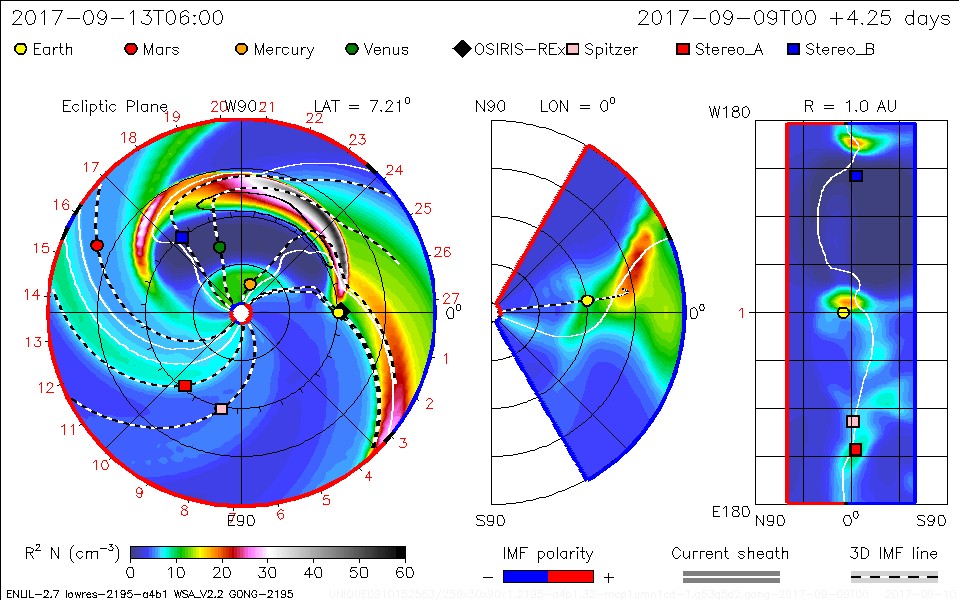 Image: ENLIL 2017-09-09 plus 4.25 days; on the left-hand image, the large sideways-tilted, red and yellow ‘C’ shape is the path ENLIL expects the X8.2 flare to take as it brushes the atmosphere of Earth (depicted as the yellow circle … public domain because .gov

Image: ENLIL 2017-09-09 plus 4.25 days; on the left-hand image, the large sideways-tilted, red and yellow ‘C’ shape is the path ENLIL expects the X8.2 flare to take as it brushes the atmosphere of Earth (depicted as the yellow circle … public domain because .gov

Here is the moving model from which the above still is taken:

On Figuring Out the  ENLIL Model

I have been trying to figure out the ENLIL model for a while now. I haven’t found much out there by way of explanation except this, which, by my non-techie lights is about as clear as mud:

I will hazard some comments anyway:

The ENLIL Key. As shown in the key at the top of the streamers, the planets are depicted as variously colored circles.

Left Image … the Equatorial Cut Plane: It looks to me like the round image on the far left shows a model of our Solar System as viewed from above. In the moving view, CMEs can be seen sweeping out from the Sun and past the planets. This is termed the ‘equatorial cut plane’ view.

Center Image … the Meridional Cut Plane: This may be a model showing Earth (the yellow circle) and the incoming CME (the wing of yellow, red and green energy) as seen from just beyond the side of Earth on the far side of the Sun. I figure this must be the case, as the CME storm shown as a ‘C’ in the left-hand image would look like the CME wing in the center image if seen from that perspective.

From the Left Image, I note that all three spacecraft are positioned about as far from the Sun as is Earth.

From this Right Image we might get a general idea of the composite photos of the event from the three spacecraft. This is just my uneducated guess …

Note also that a ground level event (GLE) was observed near both the North Pole and the South Pole on 10 September 2017.

According to Space Weather, 11 September 2017 Archive … https://www.spaceweather.com/archive.php?view=1&day=12&month=09&year=2017 … what happened was that radioactive particles penetrated Earth’s protective EMF and touched Earth.

Space Weather feels this happened because of the position of the 10 September 2017 X-Flare on the Western limb of the Sun. On looking at the blue and black photo of the flare, above, you will see the X-flare erupting on right side of the image.

Were this to be a photo of Earth, the right side of the image would be the Eastern side; however, East and West are reversed on Sun images. Thus you are viewing a Western Limb flare.

Per Space Weather, Western Limb flares have a stronger impact on Earth because this area of the Sun is so strongly magnetically connected to Earth. Here is an illustration …

To me, this seems to be another indication that the overall geoeffect of the X-flare may be somewhat greater than expected. At least, the radiation effect, due to the early X-ray influx, was strong.

Conclusion Regarding Strength of the Solar Flare

Taking all the above into consideration, while the sunspot was departing Earth when it erupted into a CME, there was an Earth-directed component to the eruption that may result in a low level geostorm today and tomorrow.

In the event the satellite imagery proves more true-to-life than the ENLIL Spiral model, then the moderate G2 geostorm prediction by Space Weather Prediction Center (SWPC) for tomorrow … https://www.swpc.noaa.gov/news/g2-watch-issued-13-september-g1-watch-issued-14-september … will likely be a little too conservative as well.

Protonfall now … is 6177, which is rather high. Both the speed and the density of protonfall are on the high side, so the CME is most likely already beginning to impact Earth’s atmosphere.

It might be that we will see G3 geostorm conditions tomorrow, 11 September 2017 PDT, rather than G2.

I myself believe this was, at most, a Carrington Event, even had it been Earth directed, rather than a killer flare … and most likely a ‘semi-Carrington’ … My reasoning is this …

On the attached list of largest X-flares in recorded history, some of the largest … as large as yesterday’s flare … have produced CMEs that were Earth directed. While there were radio blackouts, and in one case, power grid failures in Canada  (which is farther north than the United States, and thus more at the effect of solar storms), none but the 1859 CME produced a Carrington event.

I note also having read that communication lines today are more insulated than the telegraph lines of 1859, which were so greatly affected by the 1859 event. This by way of mitigating factors.

THE MOST POWERFUL SOLAR FLARES EVER: EARTH DIRECTED CME? WHAT CAUSES A CARRINGTON EVENT?

Link: “The Most Powerful Solar Flares,” posted by Space Weather and based on a list compiled by compiled by IPS Radio & Space Services … https://www.spaceweather.com/solarflares/topflares.html ..

Here is a list of the top 6, most gigantic, X-flares, on Space Weather’s list, plus yesterday’s flare, showing whether they have an Earth-directed CME. (1)

“The geomagnetic storm causing this event was itself the result of a coronal mass ejection on March 9, 1989 … A few days before, on March 6, a very large X15-class solar flare also occurred … Three and a half days later, at 2:44 am EST on March 13, a severe geomagnetic storm struck Earth … The storm began on Earth with extremely intense auroras at the poles. The aurora could be seen as far south as Texas and Florida … As this occurred during the Cold War, an unknown number of people worried that a nuclear first strike might be in progress … Others incorrectly considered the intense auroras to be associated with the Space Shuttle mission STS-29, which had been launched on March 13 at 9:57:00 AM … The burst caused short-wave radio interference, including the disruption of radio signals from Radio Free Europe into Russia. It was initially believed that the signals had been jammed by the Soviet government….

“The variations in the earth’s magnetic field also tripped circuit breakers on Hydro-Québec’s power grid. The utility’s very long transmission lines and the fact that most of Quebec sits on a large rock shield prevented current flowing through the earth, finding a less resistant path along the 735 kV power lines …” –from Wikipedia (2)

As you see, one was just moving out of the dark side of the sun, several were departing Earth, and one was directly facing Earth. Yet none created a Carrington Event.

I read that the series of X-flares that led to the Quebec power grid failure in March 1989 … which might be considered a ‘semi-Carrington event’ …  led the way to the power and speed of the final flare, by clearing the way through space for it.

As to the 1859 Carrington event itself, I have no figures on the strength of the CME. An astronomer at the North Pole was able to see the sunspot, which was presumably Earth facing.

I have yet to isolate the factors specific to a Carrington event.

The “Conspiracy Theory Addendum” above is published separately as this blog … Link: “Activation of Light for Reptoid Souls Lost in September 2017 Killer X-Flare,” channeled by Alice B. Clagett, written and published on 7 June 2021 … https://wp.me/p2Rkym-ndR ..

The links to the movies and the archives are from Space Weather Live … https://www.spaceweatherlive.com/en/solar-activity/top-50-solar-flares ..

Here is NASA on the Economic Effects of X-Flares: