As I feel it to be, the False Ascension Matrix malware slightly shifts the energy field (the ‘aura’) of the human form, so that it is slightly ungrounded.

This delays DNA upgrades, as it short-circuits the central vertical power current (aka the pranic tube, pranic column, central vertical power current, kundalini, antahkarana, silver cord, or silver thread) that runs from high above us, then through the body, along the path of the spine, and continues on into the center of Earth. Because of this short circuit, the subtle body known as the ‘body of Light’ cannot bear its optimal energetic charge for the human form, and the physical body is subject of imbalance, discomfort, and disease.

Presence of the False Ascension Matrix is accompanied by a torquing, or twisting, of the energy field of the subtle body known as the astral body, or the ’emotional body’ … The result is, a person feels fearful or angry, rather than courageous and peaceful. An experience of overwhelming, unabating fear or anger is thus an indicator that one may need to cleanse one’s subtle body known as the etheric body of the malware termed the False Ascension Matrix.

Interruption of the central vertical power current beneath the feet is the substandard energetic load of the ‘body of Light’, the cause of a propensity to disease in the physical body, and the cause of the fear or anger, as well as being the ‘door’ or ‘window of opportunity’ that allows the malware can be implanted in the etheric body. Thus, when the central vertical power current is returned to its usual, grounded state … wherein the energy of the spine … the kundalini … continues down into the Earth … the malware, all in an instant, flies off the human form.

Because of the malware, the energy of the subtle body known as the Lower Mental Body is also slightly torqued, or twisted, allowing influx of dark thought forms from the noosphere.

Last night, Friday night, just before the bars closed in Los Angeles, I was awakened by an influx of dark energies, as used to happen from time to time, during Solar events in the last two Solar Maximums.

However, this morning the protonfall is very low: 417.6 km/sec X 6.3 protons/cm3 = 2,631. There’s no solar flaring to speak of, and the solar wind from the next coronal hole will not be arriving for about 6 more days. So it seems to me that solar events are not the issue with regard to the dark energy that was circulating through the noosphere last night.

There I found that Mercury is in retrograde until tomorrow, and that may be the cause of the influx of dark energy I sensed 4 hours ago, and still am experiencing to a lesser degree.

To get back to the early morning wakeup, initially I found the influx of dark energies to be very strong. Then … out of the blue … I remembered a statue I had seen at the King Tut (King Tutankhamon) exhibition at the California Science Center in downtown Los Angeles last week.

This was a statue representing the ka, or Soul, of the King  .. 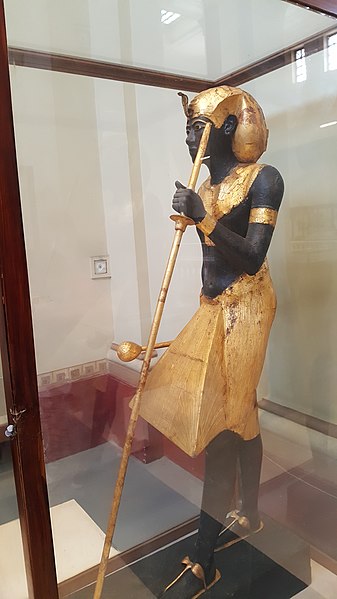 In particular, I had noticed a tent-like garment over the front of the lower body, flaring out from the just below the waist to just above the knees, and had wondered what that signified.

Early this morning, when I visualized the statue, concentrating on the unusual, flaring skirt, I experienced a sudden shift in my energy field. The entire energy field shifted downward, and a protective energy field built up in front of my lower torso. All the dark energies, all of a sudden, flew away.

Thus, I recommend visualizing an energetic ‘skirt’ similar to that in the image linked to above, whenever the energy field seems too high, or if the emotional body feels fear or anger, or if there is an influx of dark thoughts from the noosphere, or to stabilize the energy field during a Mercury retrograde.