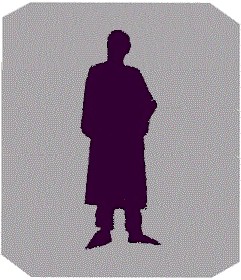 Image: “Obsession: Descent of the Dark,” by Alice B. Clagett, 23 May 2019, CC BY-SA 4.0, from … DESCRIPTION: Big block of Darkness surrounds the silhouette of a standing man with a trench coat on … COMMENT: The animated gif in which this image appears is featured in “Alice’s Perilous Tales: The Man with the Trembling Pinkie,” by Alice B. Clagett, in my website “Awakening with Planet Earth” … https://awakeningwithplanetearth.com ..

“There is a constellation of antisocial thought forms and astral stories sometimes associated with reverse kundalini, including violent felonies such as armed robbery; home invasions; rape of men, women, and children; child trafficking; murder of men, women and children; genital mutilation; human or ‘blood’ sacrifice; cannibalism; entity attachment; demonic possession; and the type of Satan worship that is action-oriented rather than bookishly inclined.

“It seems possible these thoughts and astral stories may sometimes manifest on the physical plane as ‘acting out’ of these antisocial behaviors, although, I feel, far less frequently than these energies manifest in the dreamtime realm. To my mind these form a ‘Reverse Kundalini Syndrome’ of antisocial behavior.”

A WAY TO TREAT THE SYNDROME

The source of the excerpt …

Link: “Kundalini Risen to Protect Against the Predations of Black Magicians,” by Alice B. Clagett, written and published on 25 July 2020 … https://wp.me/p2Rkym-jgo ..

… describes a way of treating this syndrome through kundalini yoga so as to reverse the criminal tendencies typical of the syndrome.

The method described is, I feel, suitable for people in good physical health who are not very young or very old; thus I might be used by a broad swath of the prison population, were they willing to participate in simple kundalini yoga exercises involving the ‘locks’ of yoga and holding the breath in or out briefly. These exercises ‘rewire’ the electromagnetic energies of the body; the rewiring accounts for the behavioral changes.

Needless to say, successful treatment of imprisoned felons who manifest this syndrome would have a beneficial effect on the prison environment and also on society as a whole after felons are released back into the mainstream.

If you enjoy exploring unique new words and terms such as the one described in this blog, you might like this reference … Link: “Glossary of Unusual Words and Phrases,” by Alice B. Clagett, written on 12 December 2019; updated … https://wp.me/p2Rkym-fzl ..