This is subsection 4.16 “The Enemy,” of the section “4.0 Qualities of Satan According to the Bible,” from the video series “Satan’s Powers and What to Do About Them,” by Alice B. Clagett. There is an edited Summary after the video …

I have for you today subsection 4.16 of the video series “Satan’s Powers and What to Do About Them,” by Alice B. Clagett. Subsection 4.16 is entitled “The Enemy.”

The notion that Satan is the Enemy is an interesting concept. By thinking of Satan as the Enemy, we perpetuate the illusion of Duality. Why do we think of him as the Enemy? Because he tempts us to turn to that which causes us Soul pain. And because we think of Soul pain as our enemy, when in fact it is a reminder of our path to Joy.

Revelation 12 mentions a great red dragon which sought to eat the child of a beautiful mother giving birth. This, it seems to me, might be taken to mean that Satan is a dragon who seeks to devour Mother Mary’s child Jesus. Thus Satan might be taken to be the Enemy of Christendom …

1 And there appeared a great wonder in heaven; a woman clothed with the sun, and the moon under her feet, and upon her head a crown of twelve stars:

2 And she being with child cried, travailing in birth, and pained to be delivered.

3 And there appeared another wonder in heaven; and behold a great red dragon, having seven heads and ten horns, and seven crowns upon his heads.

4 And his tail drew the third part of the stars of heaven, and did cast them to the earth: and the dragon stood before the woman which was ready to be delivered, for to devour her child as soon as it was born.

I have for you an image entitled “The Great Red Dragon and the Woman Clothed with the Sun,” by William Blake, created between 1805 and 1810, which I found in Wikimedia Commons. It is very dramatic, I warn you: There is the woman clothed with the Sun, at the bottom of the image. At the top is the dragon, hovering over her, and obviously causing her some alarm. She is afraid; see her face?

There is a Description of the image below … 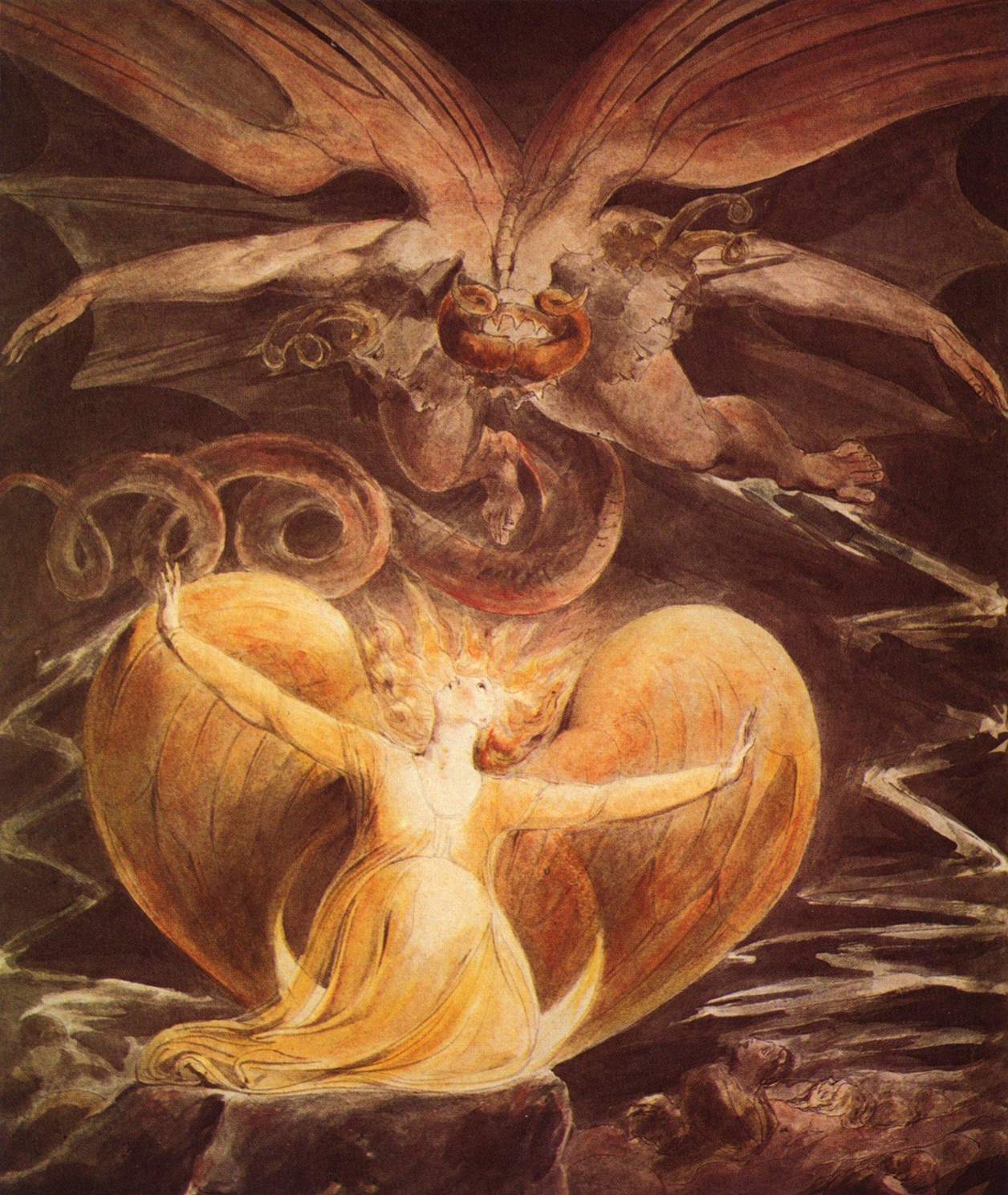 Image: “The Great Red Dragon and the Woman Clothed with the Sun,” by William Blake, created between 1805 and 1810, in Wikimedia Commons … public domain … https://upload.wikimedia.org/wikipedia/commons/0/07/William_Blake_003.jpg … DESCRIPTION: A golden, winged woman, about to give birth, is kneeling with arms defensively outstretched, looking up at a big, muscular, beige-colored, many headed dragon hovering menacingly in the air just over her head. The dragon has human legs and arms, ram’s horns, wings, and a tail; it is wearing a simple, spiked crown.

Image: “The Great Red Dragon and the Woman Clothed with the Sun,” by William Blake, created between 1805 and 1810, in Wikimedia Commons … https://upload.wikimedia.org/wikipedia/commons/0/07/William_Blake_003.jpg … public domain

DESCRIPTION: A golden, winged woman, about to give birth, is kneeling with arms defensively outstretched, looking up at a big, muscular, beige-colored, many headed dragon hovering menacingly in the air just over her head. The dragon has human legs and arms, ram’s horns, wings, and a tail; it is wearing a simple, spiked crown.

To continue with the commentary: Revelation 12 goes on to explain that the woman gave birth to the man child, then fled into the wilderness. Then there was a war in Heaven, in which the Archangel Michael and his angels fought against the dragon and his angels.

Archangel Michael’s hosts won, and the great red dragon, named in verse 9 as ‘Satan’, was cast out “into the earth,” which might be taken to mean, into the molten magma of the center of Earth, perhaps in a subtle rather than a physical sense …

5 And she brought forth a man child, who was to rule all nations with a rod of iron: and her child was caught up unto God, and to his throne.

6 And the woman fled into the wilderness, where she hath a place prepared of God, that they should feed her there a thousand two hundred and threescore days.

8 And prevailed not; neither was their place found any more in heaven.

9 And the great dragon was cast out, that old serpent, called the Devil, and Satan, which deceiveth the whole world: he was cast out into the earth, and his angels were cast out with him.

I have an image for you, entitled “Michael Casts Out Rebel Angels.” It is an illustration by Gustave Dore from English Wikipedia, and it is in the public domain. You can see Archangel Michael and the heavenly hosts at the top; and Satan and his Fallen Angels at the bottom. They are being cast out. It is very dramatic! Gustave Dore is like that; he is always very dramatic … 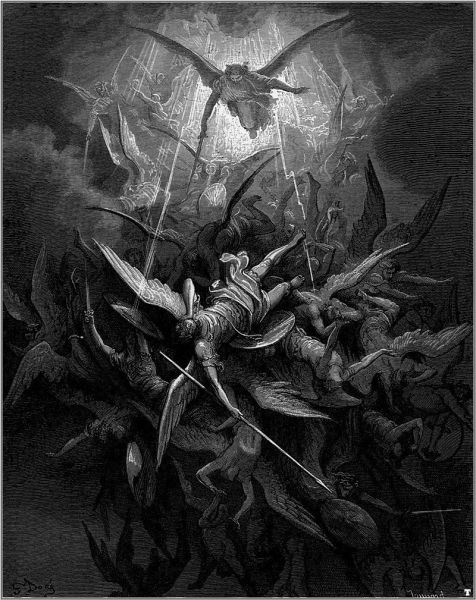 We may take it that he who is the Enemy of humankind is also at war with the heavenly hosts led by Archangel Michael, and that we may call upon these to help us ,should we feel ourselves to be tempted by, or engaged in battle with, Satan and the demons under his charge. We may anticipate with confidence an outcome similar to that portrayed in this action scene at the portal of Saint Michael Church, Vienna.

The title of the next image is “Statue of Archangel Michael Vanquishing Satan.” The photo by Vi Ko, 8 September 2013, from Wikimedia Commons, and it is Creative Commons license, so I can show it to you. 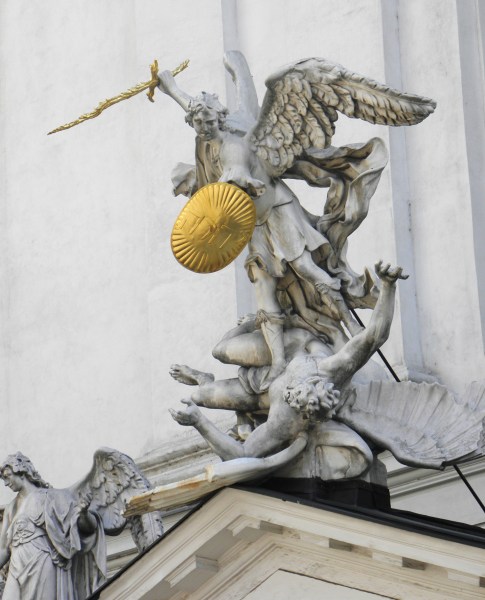 These have been some interesting images in this section, and a little explanation about Satan as the Enemy of humankind and of the heavenly hosts.