Written and published on 10 October 2013; updated with images, text and videos during October 2021-January 2022; republished as a separate blog on 28 December 2021
Full title: “Satan’s Powers and What to Do about Them: 6. How to Recognize a Person Who Is Possessed by a Negative Astral Being by the Qualities of That Being Mirrored in the Person” … “6.3 No Conscience” . by Alice B. Clagett
Biblical references (if there are any) are in light blue font.

This is subsection “6.3 No Conscience,” of the section “6. How to Recognize a Person Who Is Possessed by a Negative Astral Being by the Qualities of That Being Mirrored in the Person,” from the video series “Satan’s Powers and What to Do About Them,” by Alice B. Clagett. There is an edited Summary after the video …

I have for you today subsection 6.3 of the video series “Satan’s Powers and What to Do About Them,” by Alice B. Clagett. Subsection 6.3 is entitled “No Conscience.”

We have, amongst people who are obsessable or possessable, a disregard for the notions of right and wrong; in fact, of conscience altogether, and a tendency to perform abominable acts, and to act in ‘depraved’ ways, as they say in the School of Theosophy.

What does this say to us about the negative astral beings? Well, according to School of Theosophy teachings, the thing that distinguishes human beings from the animal realm is the addition of the subtle body known as the causal body. The causal body creates within us the ability to store karma … either good or bad. In that way, our Souls either evolve or devolve.

And so, the lack of conscience … the lack of concern for right and wrong … the tendency towards negative karmic acts … must be features of the negative astral being. In other words, how could they have a causal body? They must not have a causal body, because they have only the tendency towards negative karmic actions. And, in people that they obsess or possess, they create a gradient of human behavior … from ‘good conscience’, at the beginning … the type of socialized conscience that most human beings have … on down the rungs of Awareness of conscience, to the total depravity of people who are extremely antisocial personalities.

………………..
Sidebar: Dark Interference – Dark Sounds Possibly to Do With Leveling Out of Noosphere and Magnetosphere After a Geostorm

[Sound of cars going by and of a weed whacker nearby.] This Dark Interference, with these Dark sounds all around, and repeating, and moving from here to there, is quite something else today, is it not? Dark Interference happens. There was a geostorm yesterday; and this could be a ‘leveling out’ reaction of the noosphere and the magnetosphere to do with the Dark energies still existing on Earth, and the very bright Light energies that came in yesterday.

Here is an image entitled “Mask Carved Out of Wood, Asian Region.” This is a photo by Dominik Hundhammer, 2004, from Wikimedia Commons, and it is Creative Commons.

This is how I imagine the Soul of an antisocial personality to be … as you can see, very fearsome, very inhuman, very cruel, very animal-like. And I consider this to be the effect of invasion by negative astral beings that ‘obsess’ or ‘possess’ our energy fields. This is the way they are, in my understanding. And this is how our energy field comes to look through long association with them. Not that appealing, would you not say? … 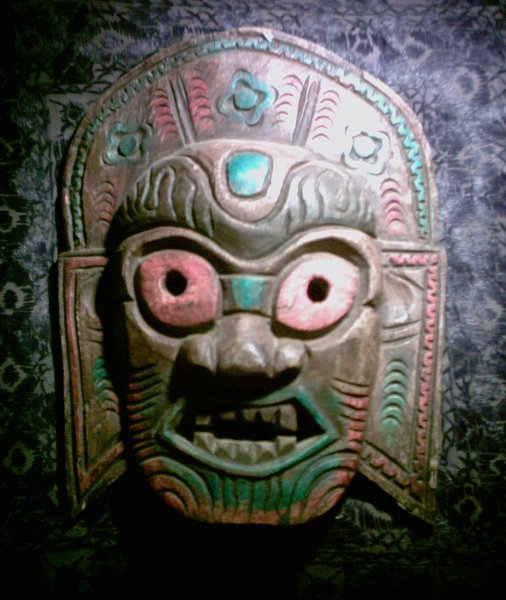 Were human beings once negative astral beings, whose DNA was somehow altered by the star beings, so that they could have conscience? That is an interesting question.

I think the answer to this is ‘No’. Negative astral beings must be a separate species altogether … although we and they may have evolved from a common ancestor (what is termed a ‘concestor’) … because, amongst the animals that have physical or 3D bodies, but no causal body, here on Earth, there is a range of behaviors … both what we could socially term ‘good’ and what we would term ‘bad’.

For instance, some evince the nurturing instincts and motherhood instincts, as opposed to the predatorial instincts, which are what we socialized humans would consider ‘less good’ here on Earth. So there is a mixture, amongst Earth animals that have physical, or 3D, form.

I have some reading suggestions for you, to do with what may be unfamiliar terms in section 6.3. One is a book called “The Astral Body and Other Astral Phenomena,” compiled by Arthur E. Powell in 1965.

That book can be viewed online, but perhaps in violation of copyright. I am not certain of that. The advantage of the electronic version would be that you might handily search for the word: depraved  … or the word: depravity …These words relate to the terms: paraphilia  … and …  paraphiliac on my website.

I use these words not for what is termed ‘kink sex’, but rather for the type of sexual expression that leads people to break the law, and to assault other people against their will. I use these words in a slightly different sense simply because I feel there ought to be a term for that; and the word ‘paraphiliac’, in common usage, could mean either simple expression of various sorts of harmless sexual preference; or it could mean these deeply difficult arenas of criminal sexuality. So, on my website, if you see the term paraphilia or paraphiliac, I really mean something that needs to be looked into from the standpoint of social issues and solutions found regarding them. For more on that, see my blog category: Illegal paraphilias – sexual deviation – sexual abuse

To go on: I have one more suggested book for you. This book is entitled “The Causal Body and the Ego.” It is also by Arthur E. Powell. There is a particular chapter I have in mind; that is “Chapter 15: Functions of the Causal Body.”  This book is in the public domain at Theosophy World Resource Centre. You can find it online at …  https://www.theosophy.world/ ..

For more on the causal body (mentioned above), see Link: “The Causal Body and the Ego,” by Arthur E. Powell, “Ch. XV. Functions of the Causal Body,” public domain, at “Theosophy World Resource Centre” …  https://www.theosophy.world/ ..