Written and published on 10 October 2013; updated with images, text and videos during October 2021-January 2022; republished as a separate blog on 28 December 2021
Full title: “Satan’s Powers and What to Do about Them: 6. How to Recognize a Person Who Is Possessed by a Negative Astral Being by the Qualities of That Being Mirrored in the Person” … “6.2 Lack of Individualization” . by Alice B. Clagett
Biblical references (if there are any) are in light blue font.

This is subsection “6.2 Lack of Individualization,” of the section “6. How to Recognize a Person Who Is Possessed by a Negative Astral Being by the Qualities of That Being Mirrored in the Person,” from the video series “Satan’s Powers and What to Do About Them,” by Alice B. Clagett. There is an edited Summary after the video …

I have for you today subsection 6.2 of the video series “Satan’s Powers and What to Do About Them,” by Alice B. Clagett. Subsection 6.2 is entitled “Lack of Individualization” …

The evasiveness … on the astral plane … of people who are obsessable or possessable … in terms of not indicating a name, not being willing to put forth a name, or not knowing their names on the astral plane … indicates to me that the negative astral beings do not have a sense of individuality. They are not like that at all. They are not like human beings, who are individualized, with Souls, with physical bodies and subtle bodies (including the causal body) as parts of their human makeup.

I have an image for you entitled “illustration depicting an individual with dissociative identity disorder,” by 04Mukti. It is from Wikimedia Commons, and it is Creative Commons. You can see, in the center, a man who looks frightened, with his arms crossed. And around him are other kinds of people: a woman, other men, people with different kinds of expressions on their faces, and a child … 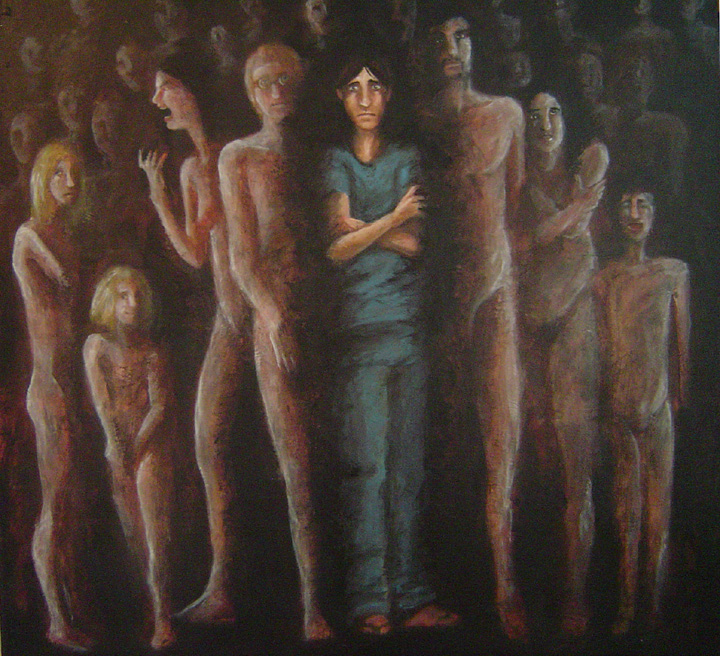 From my recollection of my reading on psychology in my college days, this disorder, which was known by a different name back then, ‘multiple personality disorder’, I think it was, has to do with people who switch from one identity to another identity all of a sudden. They may start talking in another voice, with another personality. It used to be known by that other name; now it is known at ‘dissociative identity disorder’.

The idea I have about showing you this image is that people who have multiple personality issues or ‘dissociative identity disorder’ seem not to know … this is the psychological notion … they seem to have no notion of what they individually are, so they settle on one individual, and another individual, and then another individual … and act out those roles as if it did not really matter which.

I have a different idea about that. My idea is that there is a demon that comes down and causes this trouble with the human Soul. But I will discuss that elsewhere. But in the meantime, I would just like you to know that a person who is obsessable or possessable may present to the world this identity or that identity … this personality or that personality …  this gender or that gender … and yet be a person in a particular physical form.

And that I take to be an indication that negative astral entities do not really have individualization. They take on personality and gender from the people in the world today. They mimic them; that is what I think.

You may hear astral voices purportedly moving from the voice of one person to the voice of another person … on and on. The ruling intelligence behind this flight from mimicking of one personality to mimicking of the next is, I feel, a negative astral being. On the astral plane, that being is ‘dipping into’ the central vertical power current, or ‘kundalini’, of one person, and mimicking their voice on the astral plane … and then going on to the central vertical power current of another person, and dipping into that, and mimicking their astral voice.

The negative astral being itself has no personality, But through this ‘Soul signature dipping’ … or ‘skinny dipping’, as I sometimes term it, it may momentarily clothe itself with the personality of a person. And that is why we cannot trust voices on the astral plane. It is because sometimes they are the voices of people, and sometimes they are the voices of negative astral entities, I feel, that are mimicking the voices of people … especially people that we know and love, or friends and business associates , and so forth.

Sometimes a negative astral being obsesses or possesses just one person for awhile. When that happens, apparently the negative astral being can take on the personality of that person. Then when the being ‘skinny dips’ (that is my term), the person it dips into … the secondarily and temporarily obsessed or possessed person … can briefly take on the thoughts and personality of the primarily obsessed or possessed person.

I know that this is a novel idea; one that I came up with to explain astral phenomena that I have encountered over the years. If you would like to read more about it, see my blog category: Skinny dipping (Soul signature dipping) … These are two terms for the same phenomenon.

I have observed lately … and with an eerie sense of deja vu, mimicry of gait through ‘skinny dipping’ obsession or possession by a negative astral being. Apparently, the negative being becomes accustomed to the gait of its primarily obsessed or possessed person.

Then when the being ‘skinny dips’, the secondarily and temporarily obsessed or possessed person assumes the gait … the movement of the hips while walking, the placement of the feet, the lightness of step, and so on … the ‘gait’ of the first person.

Of course, it is most likely nothing all that sinister. A second explanation would be that negative astral beings have an infatuation with gait as an expression of personality … To them, it may seem that they are clothing themselves with human form by mimicking gait.

There you will learn a little more about my theory of ‘gait mimicry’ because of obsession or possession by a negative astral entity.

To me, gait mimicry is an especially unnatural phenomenon to witness. Intuitively, it feels to me like very black magic … like the negative astral being has ‘stolen the Soul’ of the second person. In terms of the sort of eeriness that overcomes me while viewing this ‘gait’ phenomenon, it reminds me of the odd gait of being named ‘Ra’ in the 1994 version of the Stargate movie, and the end of the movie, where a negative astral being is revealed to be ‘inhabiting’ the form of a young man.

Erratum: Dimensionality of Negative Astral Beings. In terms of the reality of the situation here on Earth, I would like to point out that the negative astral being in the Stargate movie … most likely because of technical limitations … was portrayed as a physical being within the physical boy … whereas this is not actually the case here on Earth. Rather, our astral forms, which are one of our subtle body energies, are obsessed or possessed by the negative astral being. Our astral forms exist in the fourth dimension, not the third dimension; they are made of finer matter than the physical forms we see with our physical eyes.

The “Law of One: The Ra Material” defines ‘service to others’ as the antithesis of ‘service to self’. Both, as I understand it, are paths that lead to knowledge of God.]

I have some reading recommendations for you. One is the book “Law of One: The Ra  Material” which is available free online at … https://www.lawofone.info/… The category “Orion” has to do with negative astral astral entities. Also at the “Law of One” website, you can search for the term: Ra ..

You know, I woke up from a nap and came to do this video. Right after the nap I recall a curse … or a slanderous, repeated saying … that seems to be floating around in my energy field every time I nap during the day.

Then I came here, and there was nothing but noise … loud motor noise, and overhead airplanes, and all kinds of obnoxious sounds. I have to say, there is something going on right now in the noosphere. I just do not know what it is. I can only call it Dark Interference. And I apologize for the sound interference on the video today. I hope that it will be all right, and that you will still be able to understand what I am saying.

To go on with these reading recommendations … There is a website called “Energetic Synthesis” that I highly recommend. There you can search for the article entitled: “The Negative Alien Agenda (NAA).” The url is … https://energeticsynthesis.com/library/negative-alien-agenda …

Then for more on negative astral beings and their intentions towards human beings, you can go to the companion website “Ascension Glossary”  and search for this article on the Negative Alien Agenda …

That article will explain a little more to you about what it is that the negative astral entities are hoping to obtain from the human race through their acts of obsession and possession.

I have one other recommendation. . This has to do with my encounter of the true beings of ‘Ra’ who are inhabitants of our planet Venus and who exist on higher dimensional planes than we. It was a high point in my own life, and I hope you will have a chance to read this blog. The title to look for is “Ra-En: First Contact with a Star Civilization.”

You may know that I have had First Contact with a number of different, unusual sorts of beings that are not human. If you want, just for fun, you can search my blog for the term ‘first contact’ and see what appeals to you in the way of extraterrestrials.

First contact is a cool idea, is it not? I hope all the Lightworkers have a chance to channel first contact information from many different nonhuman species … especially those of love and Light … of Christed energy. Those are the most rewarding for us humans, I feel, because that represents our future as a social memory complex … our future as a race of sentient beings..