What happens when we take someone else’s life?

Further to your education regarding the School of Theosophy, I have information, just channeled, regarding murder. You will want to refer to Arthur Powell’s book on the astral body …

… as well, because there is initial information in there. But further to the notion of what happens when we take someone else’s life, the short answer is: This is a kind of contract, like a marriage contract, that unites our Soul’s path with that of the person who is murdered. So, lifetime after lifetime, our Soul and that Soul will seek to redress that issue of karmic balance, until it is attained.

And so, there is that. And in addition, on the astral plane, I had a vision not too long ago …

Let’s take the person who is in charge of executions (if there are executions in your state or country). That person is acting under someone else’s authority; but it is really he that is killing these numbers of people.

Let’s say he kills ten criminals … ten very bad criminals. Then what will happen to him, first off, is that, on the astral plane, there will be ten people gathering around his astral body while he is still alive, and who cannot leave there … who will be grasping at his ankles, and grabbing at his navel point energy … and just grabbing around, wherever they can find Soul wounding in his aura, because their karma is now glued to his. 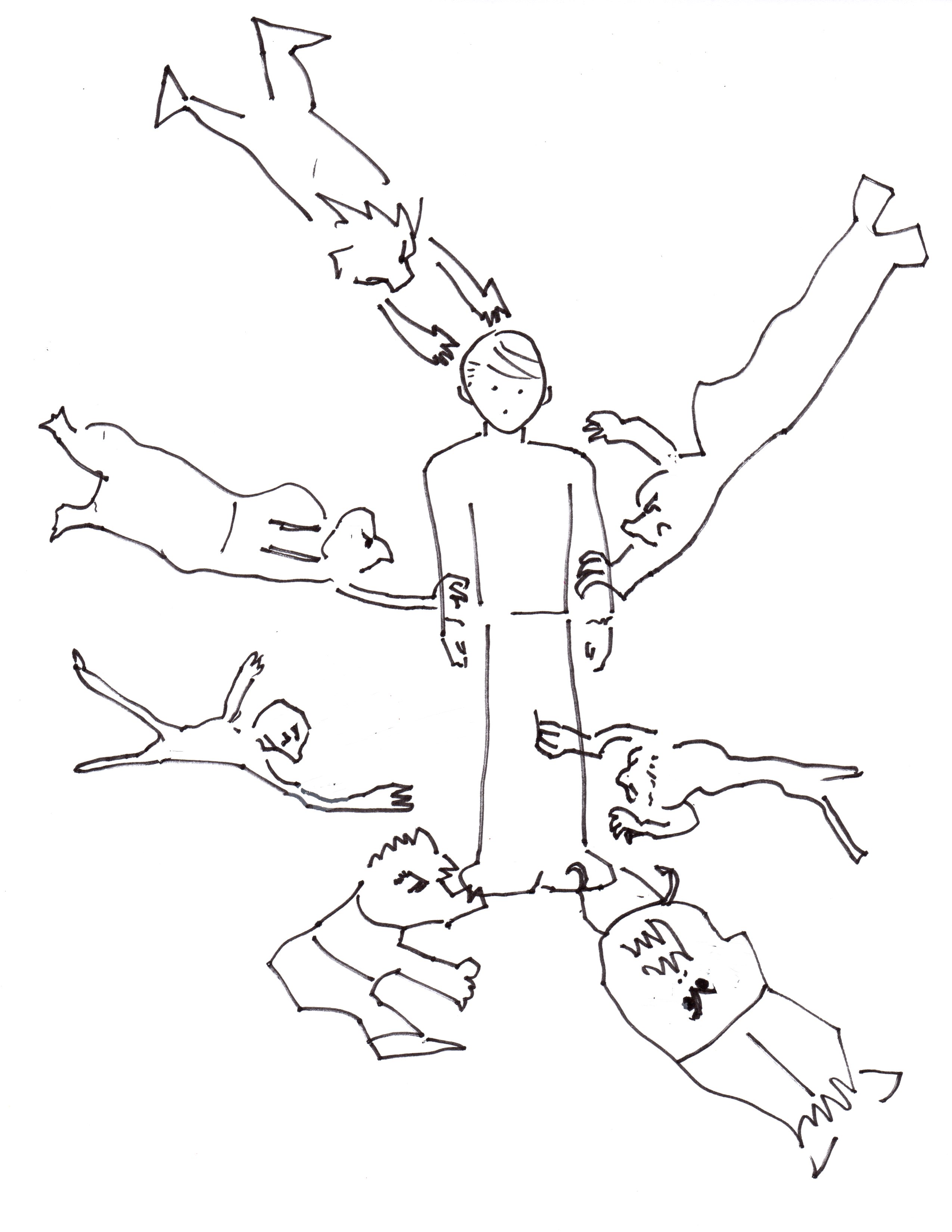 Drawing: “Executioner Latched Onto by the Ghosts of Those He Has Dispatched,” by Alice B. Clagett, 10 August 2019, CC BY-SA 4.0, from “Awakening with Planet Earth,” https://awakeningwithplanetearth.com ..

Drawing: “Executioner Latched Onto by the Ghosts of Those He Has Dispatched,” by Alice B. Clagett, 10 August 2019, CC BY-SA 4.0, from “Awakening with Planet Earth,” https://awakeningwithplanetearth.com ..

So it is not really a question of whether a person is authorized or not, to murder someone else; or whether a person intends to do it or is just suddenly found in that situation, even in the case where they call it ‘manslaughter’, where the person runs into somebody else and hits them and the family dies … or some very unfortunate event like that … there will be a binding up of karmic problems there, of the person who has killed and of the people who are killed. I thought I would mention that.

One way to short-circuit all that is to ask the forgiveness of everyone involved, and to ask one’s own Soul for forgiveness for one’s actions, no matter whether they were your own intention or completely accidental or through someone else’s authorization. That will get you out of that bind, I feel.

All right, so, as I mentioned, for more information, check Arthur Powell’s book on the astral body, cited above. Check in the index for: capital punishment … which is one of the conditions under which these laws apply.

Have a wonderful day.

The drawing is featured in Link: “Tiny Anthologies: Demons, Devils and Ghosts . drawings and images by Alice B. Clagett, Published on 3 August 2020 … https://wp.me/p2Rkym-jnZ ..