Will Ascension bring alliances amongst humankind and the Jinn and the Nature Spirits? As the Ascension continues, the nature spirits of the Devic realm will become more and more our friends. They will no longer be enslaved to the Demonic Realm. Humans will begin to have a care for the habitats of the jinn … 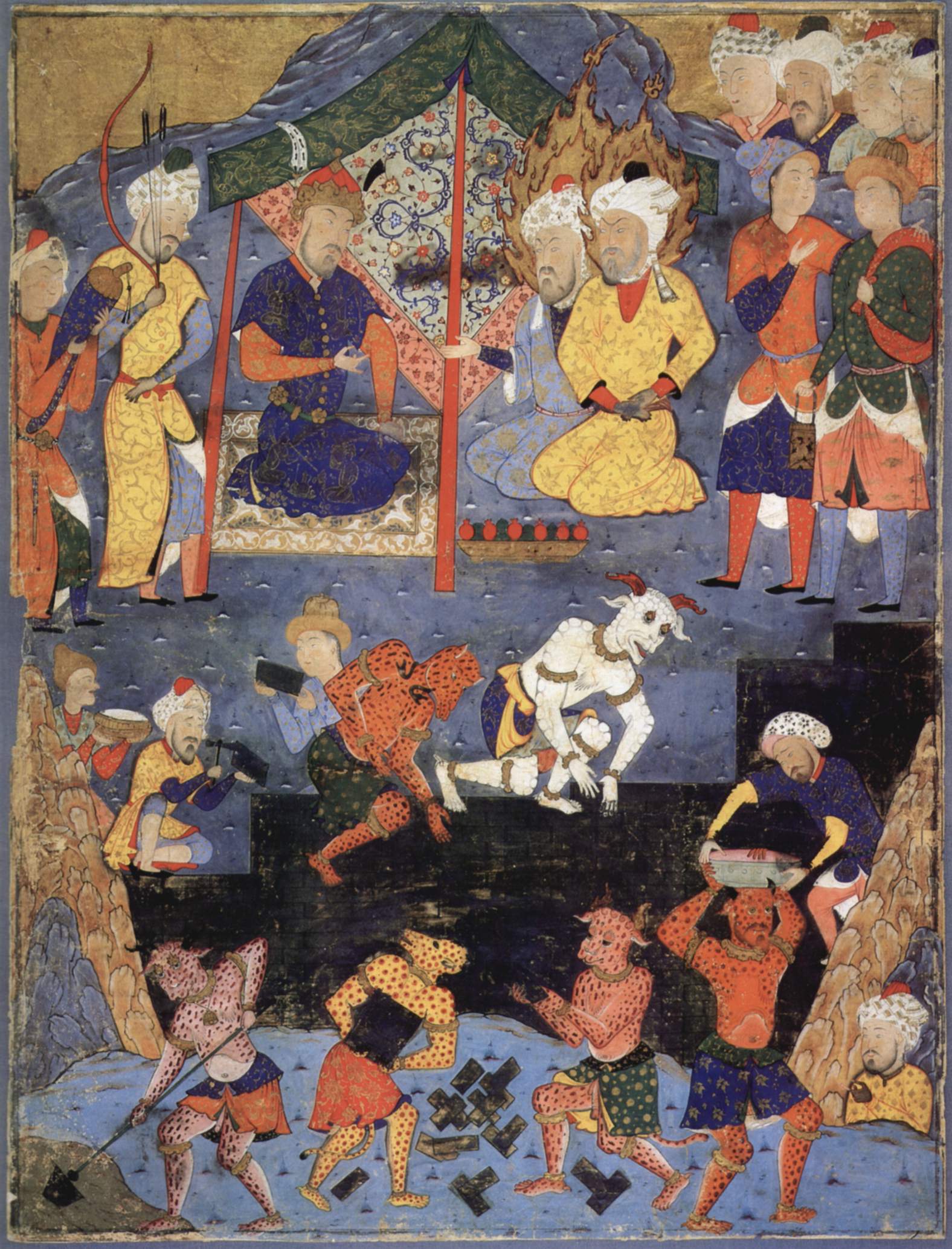 Image: “Zulqarnayn with the help of some jinn, building the Iron Wall to keep the barbarian Gog and Magog from civilized peoples (16th century Persian miniature)” … from Wikimedia Commons … https://commons.wikimedia.org/wiki/File:Iranischer_Meister_001.jpg … public domain.

Image: “Zulqarnayn with the help of some jinn, building the Iron Wall to keep the barbarian Gog and Magog from civilized peoples (16th century Persian miniature)” … from Wikimedia Commons … https://commons.wikimedia.org/wiki/File:Iranischer_Meister_001.jpg … public domain

ON FORMING ALLIANCES WITH THE JINN AND THE NATURE SPIRITS

We can also offer blessings to the young jinn in our energy vortices … offer them the blessing of enjoying the ride of the energies … and of perfecting those energies … so that our bodies of Light will clear.

Then as Ascension continues, and peace on Earth is established, there will be other places for the Demonic Realm to go. They may, in fact, just be transformed by the Light to Source, as having no more work here.

In the books that I have from the School of Theosophy, I do not see mention of the Jinn. For instance, this Table on “The Evolution of Life” from page 44 of Arthur E. Powell’s book “The Solar System” gives a general notion how the Devic Kingdom (in the astral realm) and the Human Kingdom (in the physical and astral realms) are side-by-side evolving.

However, I do not see mention of the Jinn. I have read in Wikipedia that the Jinn have both spiritual and physical qualities …

“Jinn … also romanized as djinn or anglicized as genies (with the more broad meaning of spirits or demons, depending on source) …. are supernatural creatures in early Arabian and later Islamic mythology and theology. They are not purely spiritual, but also physical in nature, being able to interact in a tactile manner with people and objects and also subject to bodily desires like eating and sleeping. Jinn in Middle Eastern folktales are often depicted as monstrous or magical creatures, however, these depictions are generally considered to be fictional.”-–from Link: “Jinn,” in Wikipedia … https://en.wikipedia.org/wiki/Jinn … CC BY-SA 3.0 Unported

My own feeling, based on my experience with them in a desert area a few years ago, is that the Jinn exist in the Plane of Forces, the Veil that separates the astral plane from the physical plane; and that, I feel, is why they perplexingly exhibit both physical and spiritual traits. They exist in the borderline world, the twilight zone, between these two regions, and may sally forth, briefly, into either plane.

Here is a good explanation of how the Jinn (aka Djinn) are born, eat, get married, have children, and die, live in tribes, and study Islam. It explains they are invisible to us, most of the time; nor can they have children with humans as spouses.  They live very long; for centuries. They can shapeshift. Apparently, the evil variety of Jinn … known as Ifrit or Marid or Afrit … are traditionally called upon by black magicians whose human clients offer them money in exchange for evil deeds … Deeds that the magicians accomplish by summoning the Jinn. Some such deeds might be the placing of a curse, or to break up a marriage. Jinn also helped King Solomon in war. Here is the text …

Link: “How Did King Solomon Employ the Jinn in Bible Versus Quran?” in Online Resources …  http://www.streetdirectory.com/etoday/how-did-king-solomon-employ-the-jinn-in-bible-versus-quran-ulwopo.html ..

I feel the black magicians also sometimes ask the Jinn to plague a person with a feeling of astral rape, or cause them to fall in love with a phantom (a ‘demon lover’ … which may, in truth, be a Jinn).

Islam calls the summoning of the Jinn to do evil a very great sin, and I heartily concur. Than which, there is no worse on Earth.

ARE THE JINN ALLIES OF HUMANKIND?

On to the good jinn …

Text in green font is not in the soundtrack.

So here is a question: Are the Jinn allies of humankind, and co-creators of Earth? Or are they the enemies of humankind, trying to lord it over us? Can we co-exist through an interspecies alliance?

You may recall, in the days of King Solomon, that he formed an alliance with Jinn, so as to reinforce his army. And the karma that that created carried down through the ages.

But could it be that this distortion of power affects both the jinn and the humans, and that the very real possibility of a friendly alliance exists? I feel this to be true. I feel that the distortions of Light of the fourth dimension are causing this misalignment that causes the implantation of ‘power over’ malware for both the jinn and humankind.

OTHER POWER OVER DISTORTIONS: DEMON REALM AND NATURE SPIRITS

This can be seen, also, with regard to nature spirits, especially in urban environments … where the Demonic Realm is capable of casting curses upon the nature spirits . so that they are ‘balled up’ or intertwined like hairpins, or wires, in our etheric net, causing what is called samskaras.

This, of course, is according to the plan of God, to aid us in our free will choice to experience Duality. But it also causes great pain on Earth. So, as the energies clear, the nature spirits will be freed of this burden of creating samskaric features or distortions in our bodies of Light.

Alice B. Clagett
In love, light and joy,
I Am of the Stars