Further to recent discussion on polarity and duality, here is a talk about helping the fractals of saints and ascended masters … such as, for instance, the crucifixion, which is one of the ‘lost children of the Soul’ of Christ Jesus … to heal and integrate with the Light Bodies of these great Souls. Other topics …

There is an edited Summary after the video.  …

I am sitting under a beautiful, sacred juniper tree right now. I am watching the wind go by, and tickle the little plants on the ground. The clouds are slowly meandering along. I have just been sitting here, mulling over the most recent clair intel.

Duality. Polarity, and the Shadow Bodies of People and Groups

To go back to some previous blogs: I have been talking a lot about duality and polarity lately. And I have talked about the Shadow Body of people … along with their Body of Light, there is a Shadow Body that helps create the duality and the polarity of the third and fourth dimensions.

I have also talked about the Darkness in groups, and the Light in groups … and how there is always a Shadow side of a group, because a group is composed of individuals. So the Shadows of all the individuals more or less equate to the Shadow of the Group, you know? Nevertheless, in most groups, there is quite a bit of beautiful white Light too, because the people all have their Bodies of Light, and those contribute to the Light of the Group.

I have also talked, in prior blogs, about the Negative Alien Agenda (NAA) …

… and the Demon World, and Satan …

… and how this is the other polarity, the Dark polarity. And then there is the Light polarity which is Buddhic (i.e., like the Buddha) and Christ consciousness … and these are very, very bright. They are the beautiful Light that is all around our Planet, now that the Planet has ascended. The things that are clearing away are the Darkness … It is lightening up, and turning into the brightness of that which we all are.

In a recent blog, I have talked about the Old Lightworker Syndrome (see above).

This is the notion that those of us that,  for a long time, have been in service to bring Light to Earth, and to show the way … wayshowers … and find a path for humanity … pathfinders … those of us that have concentrated very much on the light … Lightworkers … have had to have, in our Dark Bodies, a very Dark presence that balances and polarizes the Light.

From what I can tell, on the clair plane, what is going on is that these very great saints with a great deal of Light, to whom humanity owes a very great deal because of the inspiration that their lives provide, if they have not reincarnated, are existing at a very high level of the astral plane positive … some say, way up in the stratosphere of Earth, very high up in the atmosphere of our astral plane.

The Ghostly Fractals of Saints and Ascended Masters. But what I found is that, in addition to their very august and inspiring presence, there are also fractals … or ghostly presences … of them in even the lowest hellworlds … very low … that are like the lost children of the Soul that I have spoken of … the little body elementals that are enclosed and encapsulated and unable to dissolve, because the thought that they embody … the feeling that they embody … is so far different from the Light of the main Body of Light of these great ones.

And so the Light, the presence, of the fractals, the ghosts of the memories of these saints and ascended masters (for instance, in Jesus Christ, the memory of his crucifixion) in the lowest astral planes can be very, very Dark indeed … Very, very Dark, to balance out their very bright presence in the highest astral planes. So that is part of the news.

I have known this for some time now. But the reason I have delayed in talking about it, is that I usually do not talk about things that I cannot think of something constructive to say about, in terms of how we should deal with it, as humanity.

Just last night there was one of Judy Satori’s broadcasts, her free Summer School broadcasts …

Last night was no exception. In fact, the proportions of the commotion were almost mahabharata style. [laughs] It is a good thing I have been through quite a few of these before. And so I know that when the Light changes, the ghosts, for instance … the fractals … tend to get very upset and disturbed. It is almost like a solar flare coming in.

In fact, last night the Kp (planetary K) Index did change to yellow … 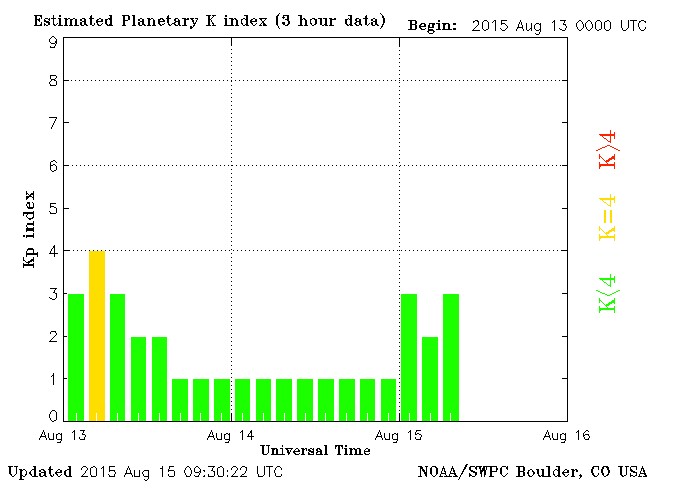 DESCRIPTION: There are 19 3-hour Planetary K (Pk) Index bars in the chart. The second bar is yellow and indicated a Kp index of 4. The remaining bars are green, indicating a Kp index of less than 4.

I think that had to do with Judy Satori’s show, and a lot of things combined to make these changes in the Kp Index (which means the excitation of the atmosphere). In other words, it is possible that the ghosts did it; who knows?! [laughs] You can come up with your own ideas on that. But the ghosts were pretty upset last night. They were just going around, and carrying on.

On Distinguishing Between the Ghostly Fractals of Departed Saints and Ascended Masters, and Their True Selves

And so the thing to do … when, for instance we recognize that these are the injured, repressed, Soul-wounding fragments of those great saints and teachers and ascended masters … what we have to do, is not relate to them as if they were the teacher (though, indeed, they may present to us, on the astral plane, as the ghostly image of the physical form of the revered teacher) … but rather, relate to them as if they were the teacher’s little, lost children that need to find their way back.

The Afterlife. Let us not take instruction from that wounding. We have to make some distinctions, on the astral plane, that I have read about … I believe these distinctions to be true, because of my own clair experiences.

Clairly I hear things well, but I do not see things that well; but clairaudiently I can confirm that there are cases of people who have passed on and are on the astral plane … According to the School of Theosophy …

… eventually the astral form drops away, and people are left with their Mental Bodies and their Souls. And then they go into a kind of a long, deep sleep, and sleeping period … Sometimes, in the past, it used to be a thousand years, according to the School of Theosophy.

The Astral Shell, and Imposter Spirits Who Take Up Tenancy in It. The discarded astral form just sort of floats around on the astral plane. And sometimes  impish nature spirits … whose intention may be, at best, neutral with regard to humankind … will slip into these astral forms, and parade around, on the astral plane, trying to play tricks on humans.

And in the worst cases, these are malicious spirits, or demons, that are trying to harm humans by pretending to be people that they used to know. One of the worst possible instances of this is when a great saint or spiritual teacher or ascended master’s astral form lies dormant on the astral plane, and is taken up by a malicious spirit.

On Recognizing the Energy Signature of an Imposter Astral Imp. Those who are used to taking instruction from their spiritual teacher who has passed on … who have been taught for a long time by that teacher, for instance … and there are many cases like this all over the world … many, many cases where students have been in touch with their students for a long, long time … may find, right now, imposters in that role.

At the current interval, the commotion that is happening is reaching the stratosphere right now … the very high parts of the atmosphere … when there are solar flares and so forth. And also, there are all the ghosts, who are not really sentient at all … all the fractals who are stirring about … like, you can imagine, seaweed waving in a deep, deep sea …

Image: Animated gif of baby shark and waving seaweed in Monterey Bay Aquarium … https://i.gifer.com/6KAt.gif … To me, the shark is like a Demon, in the astral realm, and the seaweed is like an astral shell in which it can hide and pretend to be vegetable rather than predatorial.

Our job, during these times of Light, astral bewilderment, and upset … our job is to maintain our own pranic tube energy … not to relate to anyone else, but to put ourselves in touch with our own higher selves.

For most of us, our Awareness is in the third and fourth dimension right now. But according to Judy Satori, who is in touch with the Galactic Council, we have 12 formed dimensions … 12 formed shapes. We have our third dimensional shape … our physical form … and our fourth dimensional shape … our astral body. After that, there are eight more higher selves, within the formed realm, that we could get to know and relate to, at these times.

So let us place our energy on our own Soul remembering. That will allow these great saints, and these great teachers, and these great ascended masters, to work with their own fractals and their own integrations … because they are still, in almost all cases, in the higher fourth dimension. And then, as they integrate all their fractals, they move into the fifth or sixth dimension, I believe. That is how it seems to me.

But they cannot do that if we are pestering them with our own fractals, because ours ratchet against theirs. So let us incorporate our own body elementals that are wounded … our own Soul wounding. Let us discover our higher selves. Let us do that work that is pertinent just to us, ok? I think that will help; it will help all of them.

They have a monumental task before them, of incorporating the very dense, highly compressed little bubbles of wounded body elementals that are shadowing about in Hades, into their extremely bright Bodies of Light. That is what I think. And also, if those ghostly presences begin to sound more and more intelligent … more and more animated … that is because that is what is happening. And when they reach a certain state, they are going to get to the point where they can resume a relationship with the main Soul, and become a unified Soul field.

All is well. All is going fine. There are just a few things to look out for.

Take care, everybody. Talk to you later.

[A short audiovisual clip of birds in a juniper tree follows.]

A photo from the video is below. This and many more photos taken during the Pastorius Reservoir walk that day are here … Link: “Pastorius Reservoir,” photos by Alice B. Clagett, imaged on 13 August 2015 … https://wp.me/p2Rkym-b5F .. 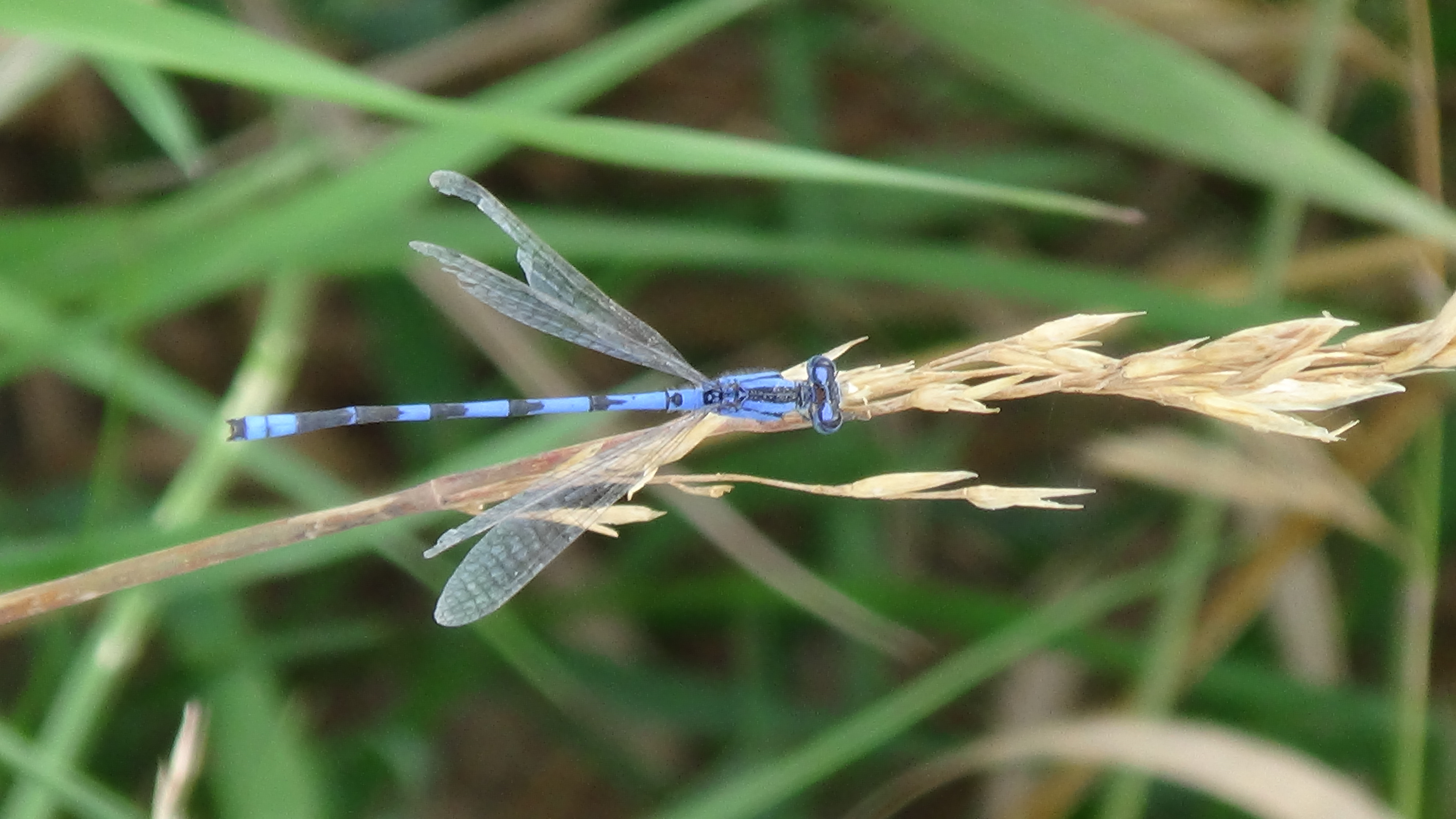