Written and published on 30 July 2018; revised
Previously titled: Caravaggio and Baglione Today: Is Lucifer Transforming to the Light?
15 September 2020: This person Caravaggio apparently was a prior incarnation of ‘Castratrux – Basal Vampire,’ who is featured in a blog entitled: Overview: Catastrophic Childhood Case Study: ‘Castratrux – Basal Vampire’

… and I came across a painting by Giovanni Baglione, on the topic of sodomy and pederasty … 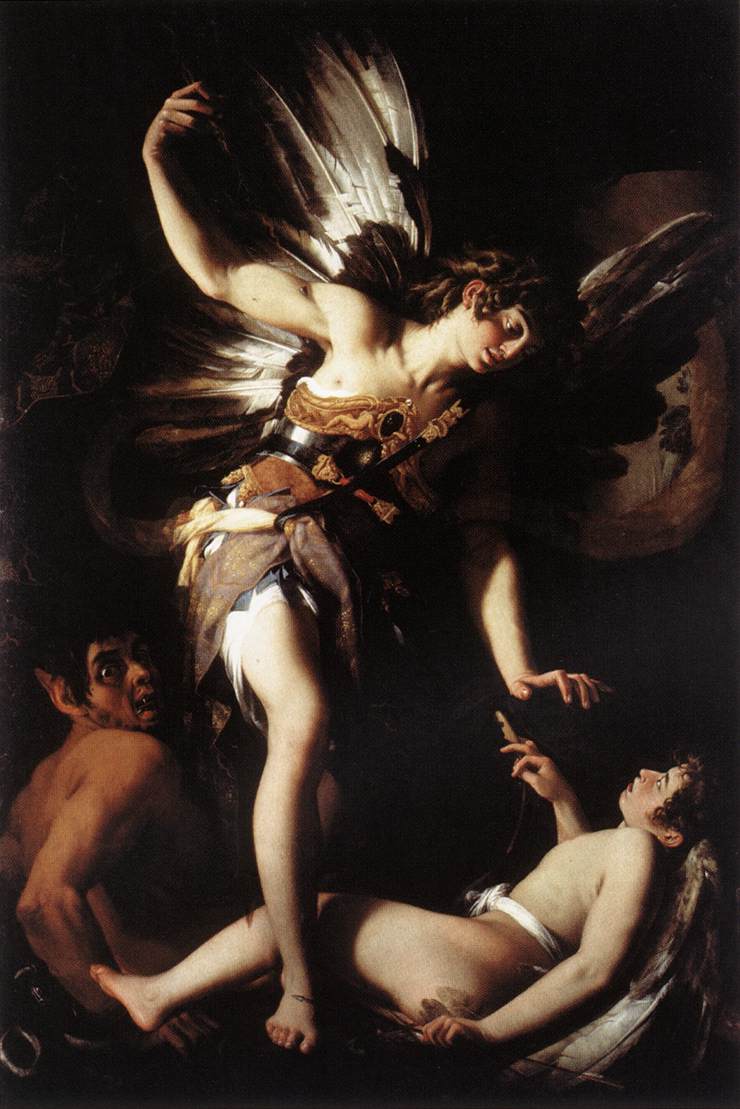 … that caused some noospheric commotion when I first published it; so much so that, although the painting is famous art from long ago, and was intended to offer Christian admonition, I had to remove the painting from the blog and substitute a link instead.

I take it that the topics of sodomy and pederasty are still greatly contentious in today’s world. I recall with interest watching the new movie about Pope Francis in recent months …

I liked the movie very much for its concern for humankind and for Gaia, and for its common-sense approach to the problems that face the world.

One of the things that really surprised me in the movie, was a passing reference to homosexuality as being all right, after all, and to sexual abuse of children as not being all right. There is a little about that here …

CHRISTIANITY, EXORCISM, AND THE EXISTENCE OF SATAN

Then there is the issue of the existence of Satan, which has proponents both for and against, in the Christian churches.

This swirl of controversy around the topic of Satan and exorcism, homosexuality and pederasty, reminds me of a time about 400 years ago, as represented by the art of that time. It looks like there was an upwelling of these themes centered around the life and art of a man named Michelangelo Merisi da Caravaggio, (1571-1610) and critiqued by his bitter enemy, a contemporary painter named Giovanni Baglione (1566-1643).

The 1602 painting by Giovanni Baglione cited at the beginning of this blog, I feel, in counterpoint to Caravaggio’s child nude painting, “Victorious Cupid,” also known as “Amor Vincit Omnia,” which is thought to offer temptation to pederasty. For more on this, see …

In Baglione’s painting, an angel is saving Cupid from a sodomitical devil or demon. I surmise that all the figures in the painting are intended to represent Caravaggio; if so, the message of the painting might be that Baglioni felt pederasty is demonic, and that Caravaggio might be practicing pederasty, and that he ought not to. Or that Caravaggio had been a homosexual child prostitute, whose instincts to good were at war with his instincts to bad.

There is another version of Baglione’s painting, with the face of the devil hidden; I surmise that Baglione may have come under fire for painting a caricature of Caravaggio as a demon or devil, and then painted the second version of the painting to ‘soothe the waters’ amongst Caravaggio’s wealthy patrons, one of whom, I surmise, might have been high up in the church, perhaps even in the College of Cardinals … 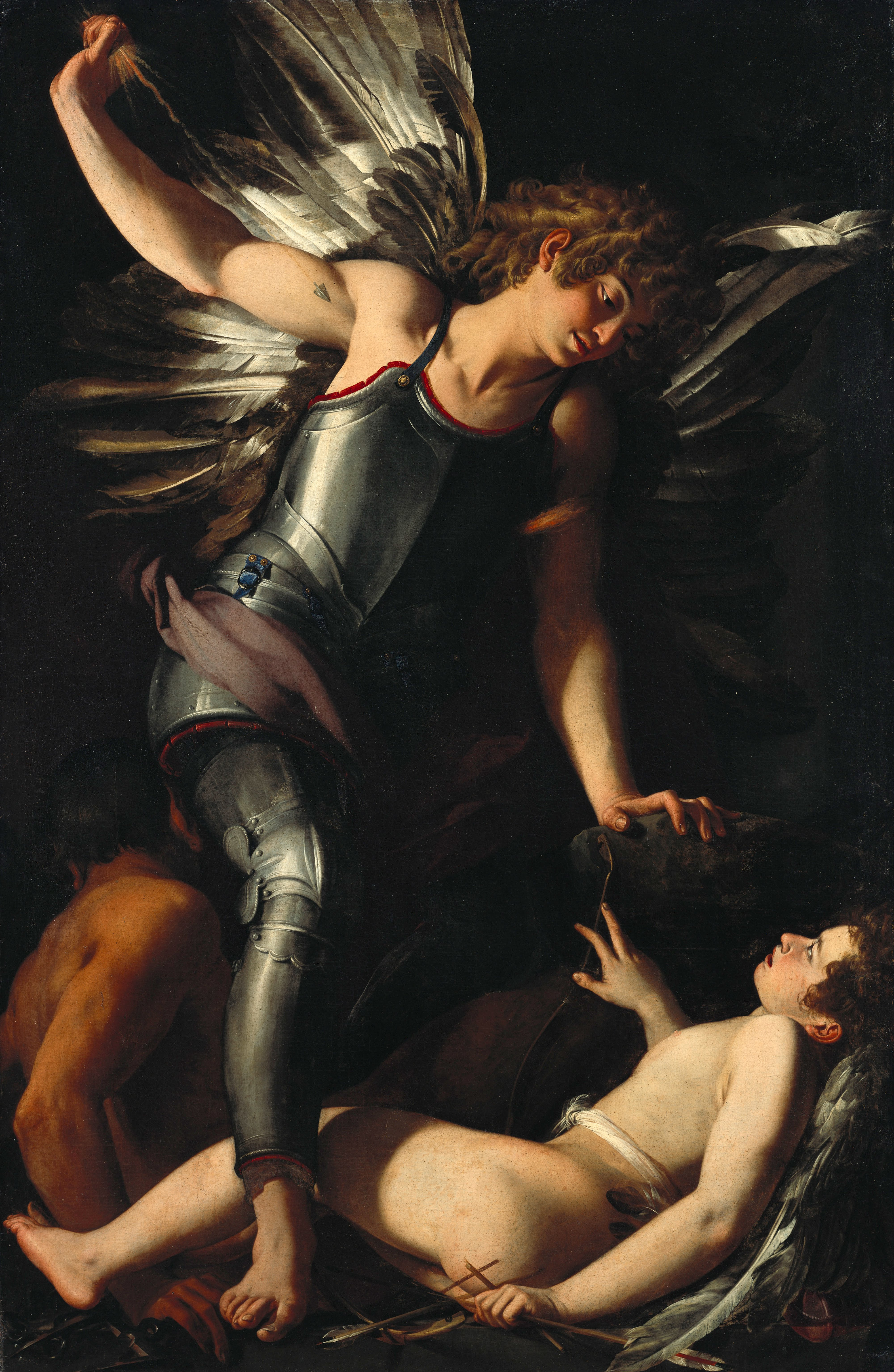 WAS CARAVAGGIO A ‘CIRCLE OF ONE’ ANTISOCIAL PERSONALITY?

Just off the cuff, it seems to me that some of Caravaggio’s paintings may feature him as subject, and that he might have imagined himself as a ‘Circle of One’ … the only person in his world. For instance, this painting appears to be of Caravaggio at various ages .. 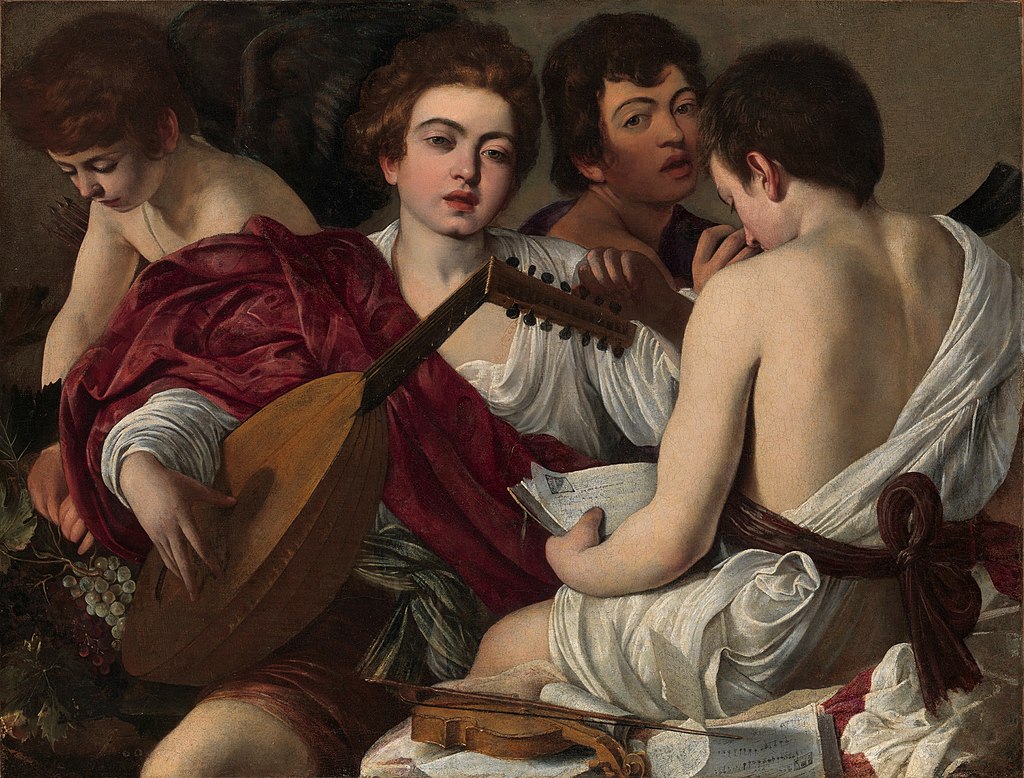 From this painting, I surmise he felt that women hated him, or conversely, that he hated women, but may have felt it too dangerous to portray that feeling … 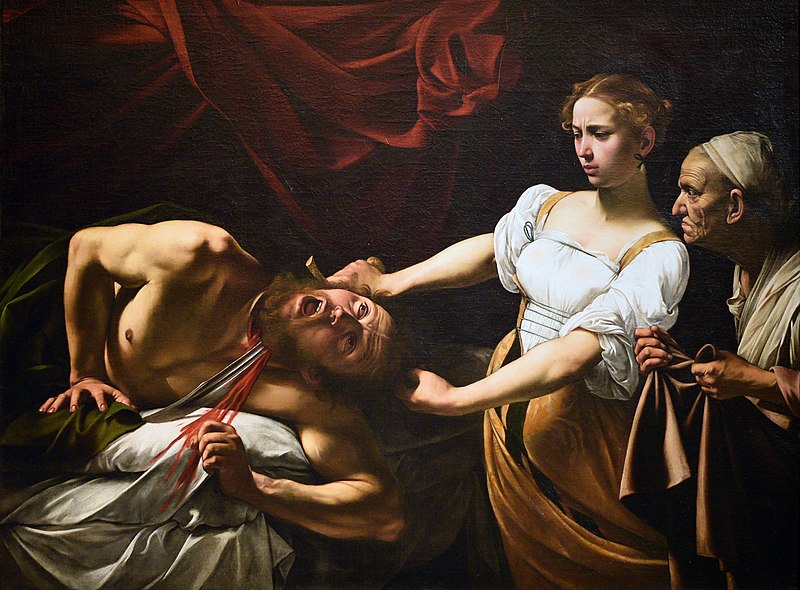 I have a theory he was a wild and violent person, who believed everyone else, at heart, was like him, only pretending not to be. I feel he was sarcastic and vindictive with regard to the Christian church of the day.

In this painting, I feel he might have been making fun of a monk, who had distained him. I feel Caravaggio painted himself as the angel of solace in the painting, and the monk as swooning in ecstasy at his physical beauty, rather than in religious ecstasy. If true, this painting reflects the Heresy of Physical Form, of which I spoke in another blog … 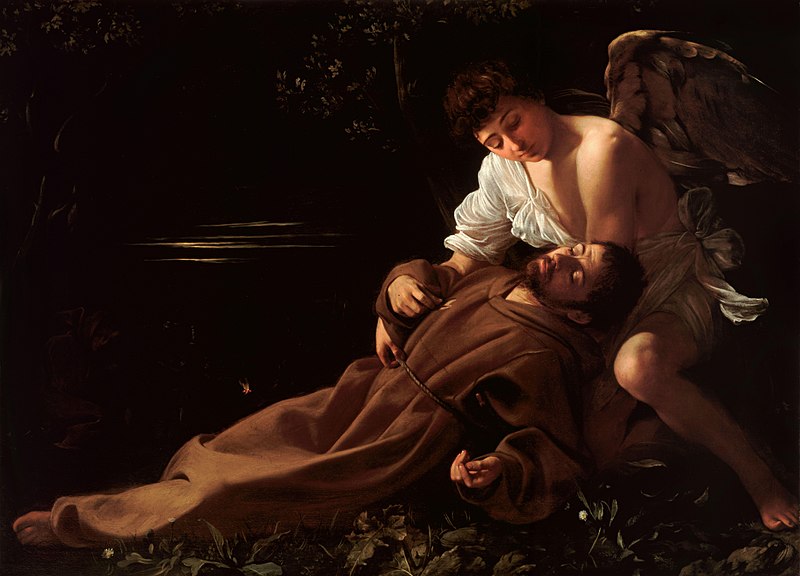 Following up on the same personality traits, here is a painting purporting to be Saint Francis (seated, legs akimbo under table) being called to Christ (standing, hand pointing, on right) … 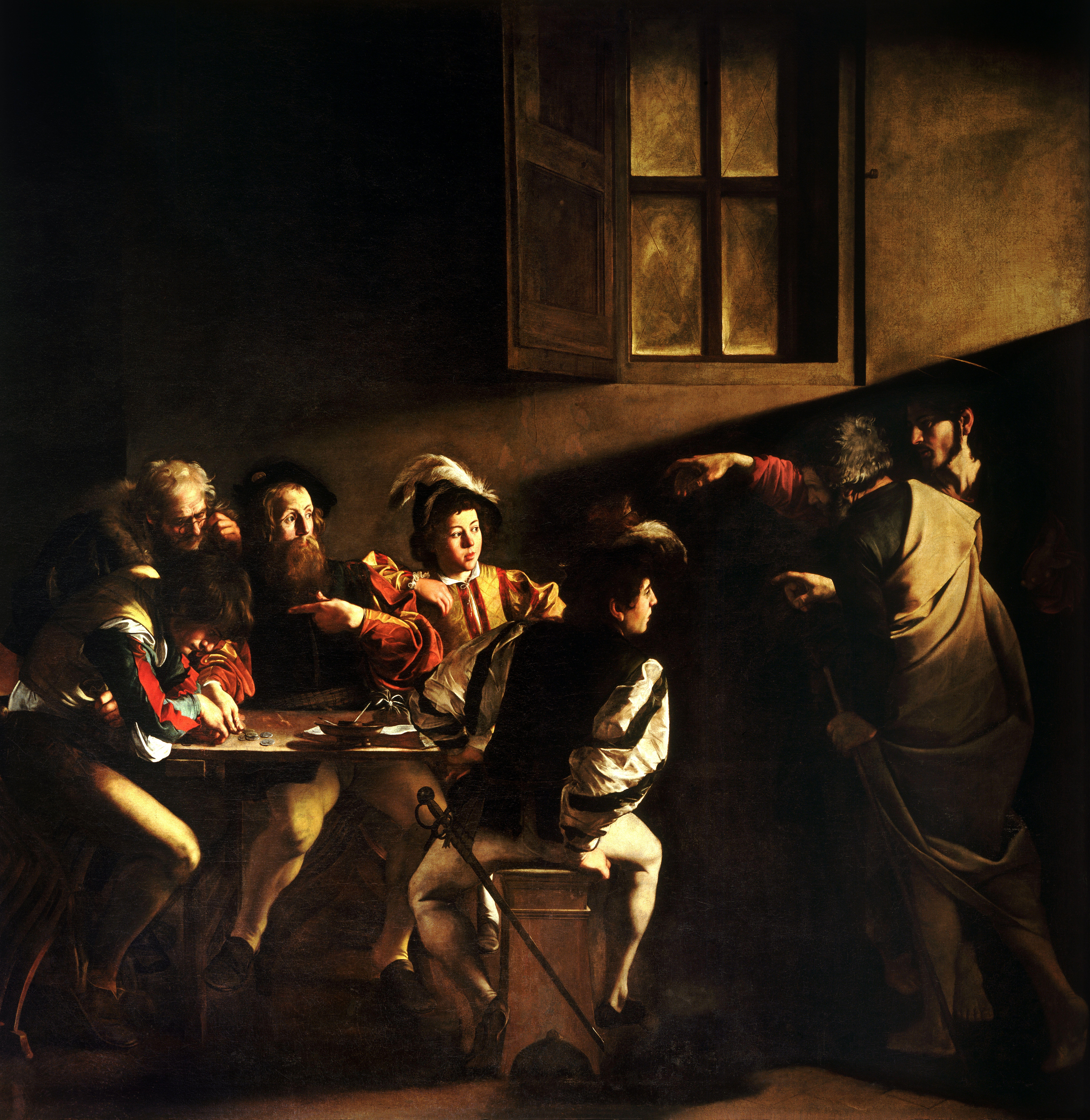 I feel this painting has a double entendre, however. Notice what may be a young Caravaggio, nattily dressed, and bathed in a shaft of golden light that emphasizes his physical beauty, sitting next to the purported Saint Matthew.

It is possible this painting documents Caravaggio’s youthful patron, perhaps a higher up in the church … maybe even a Cardinal (nee Saint Matthew) being called out by another man for the practice of pederasty. If this is so, then this painting represents the painter had a philosophical position in opposition to the Christian church of the day. as might be deduced from the Wikipedia article on his life … 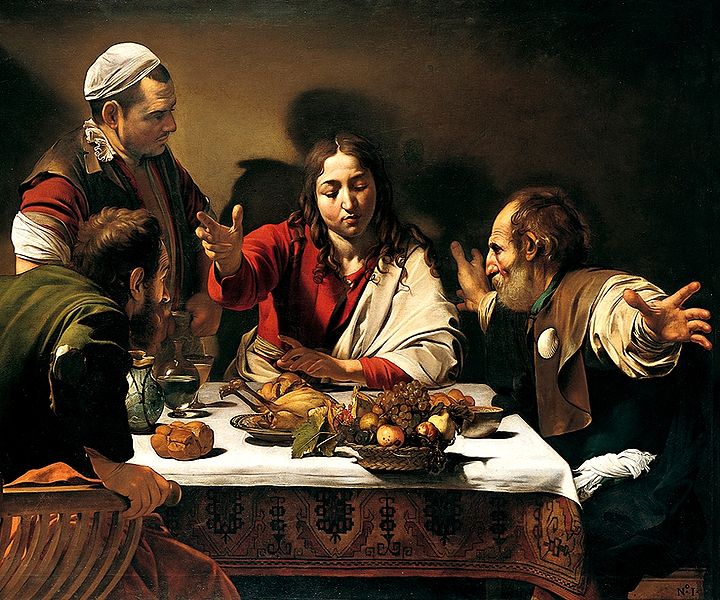 Here is an interesting painting by Caravaggio … 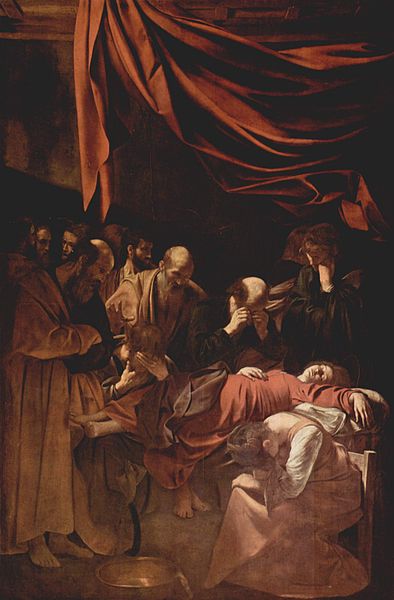 Image: “Death of the Virgin,” by Caravaggio, circa 1606, in Wikimedia Commons … https://commons.wikimedia.org/wiki/File:Michelangelo_Caravaggio_069.jpg … public domain

Image: “Death of the Virgin,” by Caravaggio, circa 1606, in Wikimedia Commons … https://commons.wikimedia.org/wiki/File:Michelangelo_Caravaggio_069.jpg … public domain

What I do not see in the painting is an image of Caravaggio, which I feel is telling. Could it be that Caravaggio murdered the young woman, because she would not have sex with him? Or might it be that the blanket across her lower body indicates she was raped and murdered?

I am led to wonder about this because, in the noosphere for the last few decades there has been the energy signature of a similar person or persons, who clairly purport to hate women, to have no ‘hold’ button with regard to sexual arousal, and who clairly purport to strangle women, while raping them, if the women object.

Was Caravaggio like this noospheric energy thread, in his own life? … 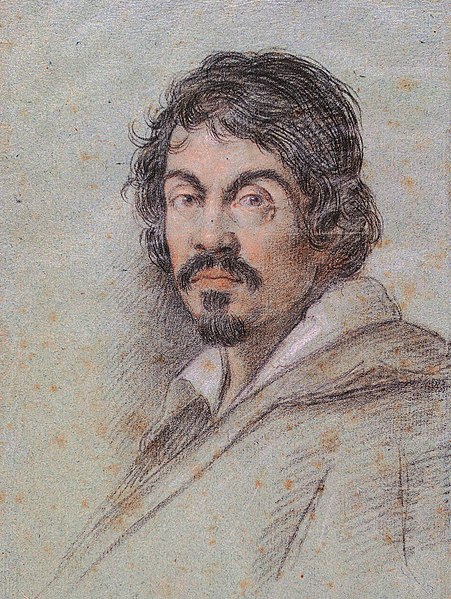 I see, in his heavily lidded eyes, the personality trait of hedonism; and in the set of his eyebrows, his facial hair, and the expression of his mouth, lack of empathy and compassion. These are some of the traits of the antisocial personality.

In 1606, at the height of his career, Caravaggio murdered someone, It could be that this painting of Saint Jerome, writing something, with a skull on his table, represents the subsequent death threat to Cravaggio by a Church leader in authority … 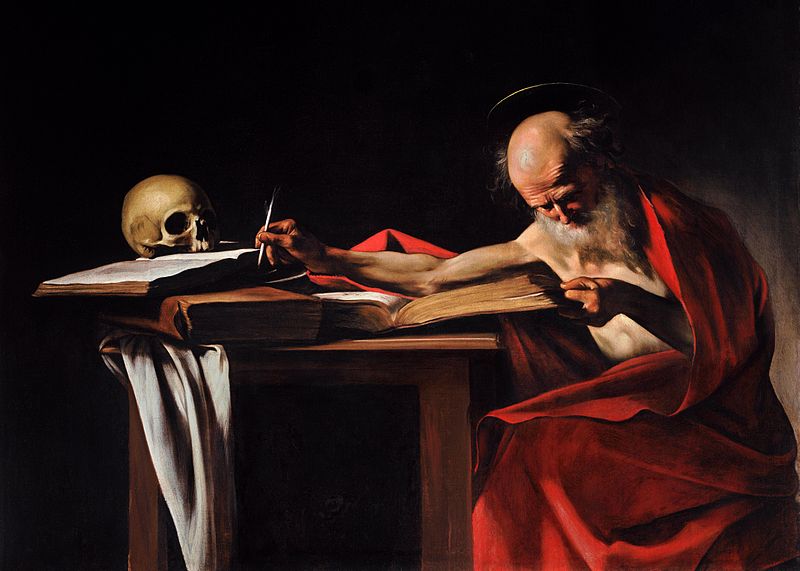 Or if my understanding of Caravaggio’s personality is correct, it may be a death threat by Caravaggio towards the person that outlawed him and caused his exile.

It looks like paintings on exile represent a request for help or mercy, death threats or his prediction of his own death, perhaps murders he commits ,,, overall: violence and tumult, it looks like.

DID BAGLIONI’S PAINTINGS DISCLOSE THE TRUTH ABOUT CARAVAGGIO?

It seems to me that Giovanni Baglioni was ‘onto’ Caravaggio, and that some of his paintings were retorts to the curses imparted through paintings on similar themes by Caravaggio.

For instance, this painting by Baglioni may be a retort to Caravaggio’s painting on the same theme. It seems to me that the cherub, the angel, and the apparently dying St. Francis in Baglioni’s painting are all depictions of Caravaggio … 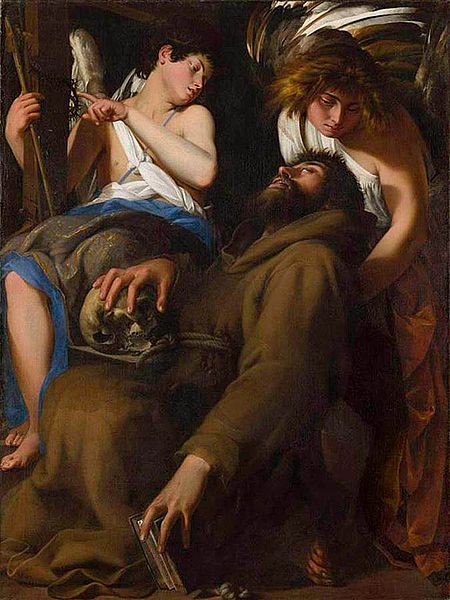 If this is so, then the meaning of the painting might be that Caravaggio’s life as a homosexual prostitute, both in childhood and in young manhood, are to bring about his death as he plays the false role of a man of God.

In this painting by Baglioni, one possible interpretation might be: The woman on the right is Caravaggio, dressed as a woman. Was Caravaggio, then, a person who cross-dressed? 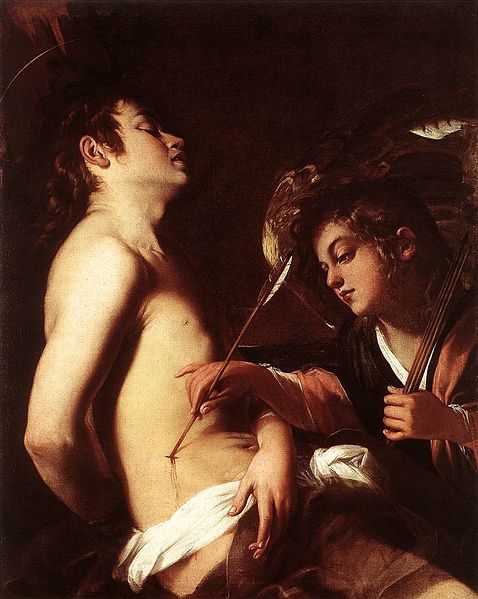 Could the ‘angel’ be putting the arrow into the young man on the left, who is also Caravaggio? If so, would the painting mean that by cross-dressing, Caravaggio had injured his reputation as a man?

Other paintings by Baglioni night be construed as mirroring the death threats, death predictions, and perhaps report the death of Caravaggio.

CONTROVERSY SWIRLING AROUND THE LIFE OF CARAVAGGIO, AND LUCIFERIAN ENERGETIC THREADS IN THE NOOSPHERE TODAY

I see an energetic connection between the life of Caravaggio, and the artwork by and about him, and a strident series of noospheric energy threads coming to clair hearing since The Shift in 2012.

I clair see a nexus of Dark around those paintings, and around a similar noospheric ‘icon’ or person representing a deep subconscious image of evil, today. To my clair vision, it is almost as if Lucifer is being personified as a man like Caravaggio, who may be alive today. Possibly it may be several men, or a man who, in another incarnation, was Caravaggio, and through whom the clearing of these energy threads of Luciferianism or Satanism, somehow to do with sodomy and pederasty, and also maybe to do with gender slurring or gender pretense, may be brought to the foreground of our awareness, as humankind, so that they may be transformed through the Light.

I see also strands of noospheric energy to do with vengeance, vindictiveness, hatred of women, rape and murder of women, threat of murder, narcissism, pretending to be ‘Jesus Christ’, pretending to be a devout religious person, while in fact being quite the opposite; utter despisal of the sacred, and dissimulation that fools the clergy as well as rich patrons who are decent people.

I see memorable artistic talent, used by antisocial people today to pull the wool over the eyes of normal people, as may have been the case with Caravaggio.

ON STANDING IN FAITH, WHEN DESPAIRING HEARTS ARE ALL AROUND US

I short, I see trouble, big trouble, in the process of clearing and transforming to the Light. As they say: Fasten your seatbelts!

I do feel that it would be easy to get caught up in that ‘mano a mano’ thing with people who are channeling Luciferian energy, as, for instance, Bagliano seems to me to have gotten caught up in disclosing the ‘nature of the beast’ with regard to his rival Caravagglio. Yet, where would that get us, as people who hope to heal and uplift Earth?

Surely the thing to do is to sit, with neutral mind, with courage, and with faith in God, and ask that grace make short shrift of this struggle, this seeming mortal combat, between the Sacred and the Profane.

We humans have no answers here. But God does have the answers, and He will light the way.

See also “Caravaggio as Lizardoid Sadist” in … Link: “Escape the Clutches of a Sadist!” by Alice B. Clagett, written and published on 30 August 2022 … https://wp.me/p2Rkym-rZg ..

“How to Pronounce the Name ‘Caravaggio'”
by Alice B. Clagett
Soundtrack and Words
30 July 2018

That name, ‘Caravaggio’, it is such a sonorous word. It is replete with possible pronunciations. I will give it a go …

If your husband comes home from work, you say: Ah, Caravaggio [simpering voice]

If you are at church you say: Caravaggio [said in a conspiratorial whisper]

If it is your father, and you are greeting him, you say: Cara …, Caravaggio! [said with adoring, childish glee]

If you are talking about a villain by the same name, you have to pretend that there is a big, black spider crawling up the bottom part of your throat, and that the spider is saying the word. Are you ready? … Caravaggio! [said with a resident evil sort of voice] [The speaker bursts out laughing.] Pardon me. [clears throat]. That might be the way to pronounce it for a person you do not hold in high esteem.