Here is a curse and one possible answering symbol to undo the curse. This curse has to do with death, or the killing of a person or persons being the foundation of a building, a dwelling, or a group.

In the long run, the answer to this kind of deep subconscious archetype or symbol is affordable housing for everyone, I feel.

There is an edited Summary after the video; after that is another section not in the video …

The night before last I saw in a vision a curse that was laid upon a number of people that was like an archetypal image or subconscious symbol with great power … but it was a black magic curse.

I will draw you a picture of it, and attempt to explain a little about it, in hopes that it will get to those people so that they can dissolve and disempower this curse. It goes like this … 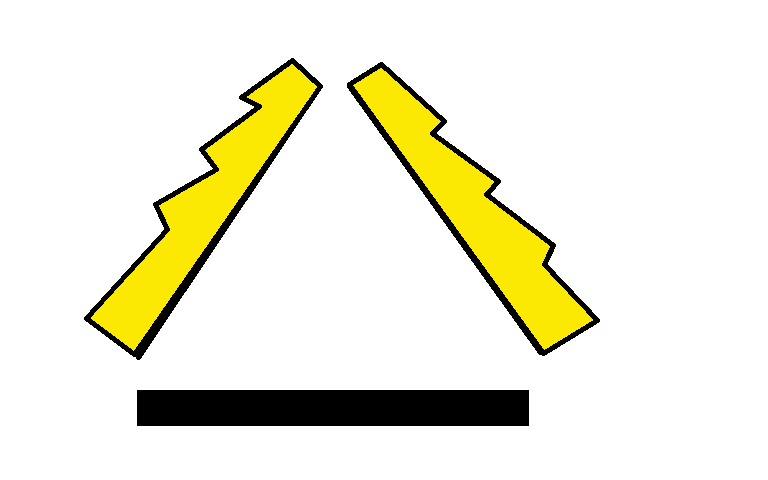 Drawing: “The Dwelling Curse,” by Alice B. Clagett, 3 November 2016, CC BY-SA 4.0, from “Awakening with Planet Earth,” https://awakeningwithplanetearth.com … DESCRIPTION: Two yellow bars leaning toward each other, so that they look a little like a roof, with a black bar laid horizontally beneath them.

DESCRIPTION: Two yellow bars leaning toward each other, so that they look a little like a roof, with a black bar laid horizontally beneath them.

It is a three-part picture. Down at the bottom there is a very black bar. And on the sides there are two yellow … it looks kind of like half-palm-leaves, only yellow … solid things, like wood.

The curse is like this: The black bar represents death or a dead person. And the yellow things represent a place to live, like a house or a place to live. When this curse was placed, it stated or imprinted, in the subconscious minds of the people, that if they killed … if a person were lying dead or buried … then they would have a house to live in.

So the idea is, as in the thuggee cults, that the death of someone will give them sustenance or means to survive. Further, the symbol of this curse shows that the dead person is the ‘floor’ … or the foundation … of this safety; of the building that the people have.

So buried in the ground of the place you would find the corpses of the people that have been killed to preserve this edifice. By ‘edifice’ is meant the group … the continuation of the group … and including the building and the grounds and so forth.

I have a thought about what to do to dissolve this curse. I think the thing to do is to offer a counter-symbol. It could be like this … 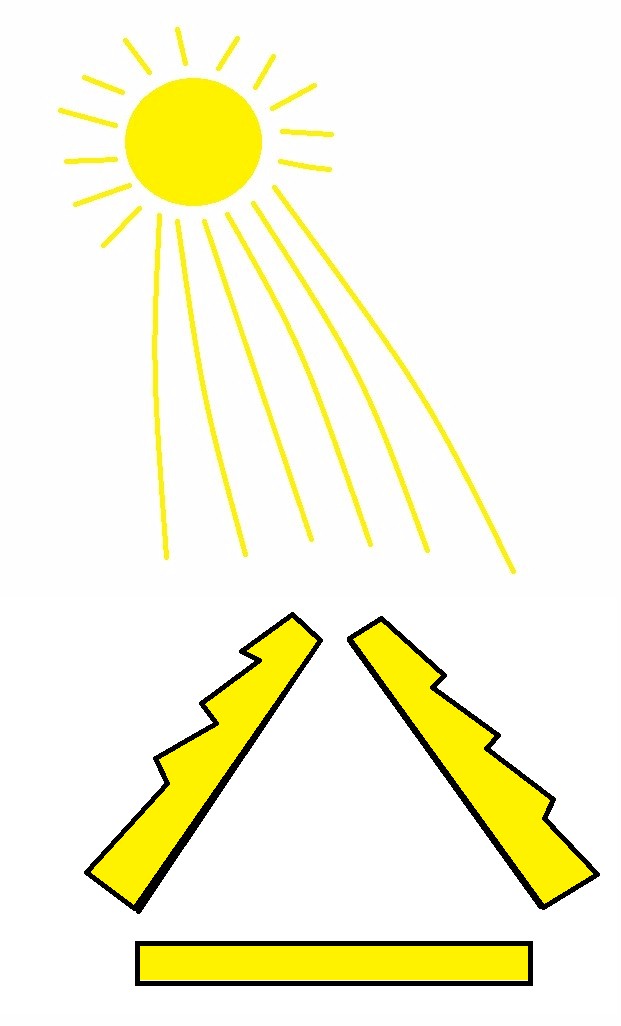 Drawing: “The Dwelling Curse: One Answering ‘Symbol’,” by Alice B. Clagett, 3 November 2016, CC BY-SA 4.0, from “Awakening with Planet Earth,” https://awakeningwithplanetearth.com … DESCRIPTION: Two yellow bars leaning toward each other, so that they look a little like a roof, with a yellow bar laid horizontally beneath them, and sunlight streaming down upon them.

Drawing: “The Dwelling Curse: One Answering ‘Symbol’,” by Alice B. Clagett, 3 November 2016, CC BY-SA 4.0, from “Awakening with Planet Earth,” https://awakeningwithplanetearth.com …

DESCRIPTION: Two yellow bars leaning toward each other, so that they look a little like a roof, with a yellow bar laid horizontally beneath them, and sunlight streaming down upon them.

In this image there are still the bar at the bottom, and the two symbols that represent a house or building. And in addition to that there is the sun here … [top left] … a yellow Sun, and the rays of the Sun, coming down, onto the building here (which is bright yellow now from the rays of the Sun). Down here beneath it, the floor of the building is no longer black; instead it is that same bright yellow color.

So what we have is the Sun, and the abundance of the Sun, shining down on the building, nad changing all of that karma and that bad spell about having to kill … or that death is the foundation of the building … and the foundation of the group … into the notion that the Sun’s abundance is changing everything into a beautiful yellow Light color. In other words, the karma is dissolving. So this is the answer; this is one ‘answering’ symbol.

I later learned, on the psychic plane, that the 3D source of this curse may have been a cover-up regarding a love affair between a purportedly celibate, holy man and a young boy, a child less than 10 years of age. As the holy man … according to the astral airs … had contracted HIV from the male prostitutes he had been employing, he passed on the virus to the boy, who died of AIDS not long thereafter.

The holy man, as the story goes, felt still an obsession to hold onto the child after his death, as it was his first love affair, and he cherished the unconditional love the child had shown towards him. So the child was buried illegally at the place where the man served as a holy man for his spiritual community, near the place where the people worshipped.

Years passed, and the child’s astral form remained chained to the mind and emotions of the holy man. During all those years, the curse was in effect. That curse is the topic of this blog, which … I see now … speaks to the issue in a deeply symbolic way.

By God’s grace, after the retirement of the holy man, the grave of the child was discovered, and the remains removed elsewhere. When that happened, the black magic spell was lifted from the place where the curse had been cast.

It is my hope that the remains of the child will one day be place in a consecrated graveyard that is far from the place where the holy man now lives, so that the spirit of the child may be set free to pursue the natural course of Soul evolution after dissolution of the physical form.

So may we all let go those who have passed on before us, in charity of heart and healing of what is lost, in knowledge of the fulfillment of our own destiny through Christ our Lord. 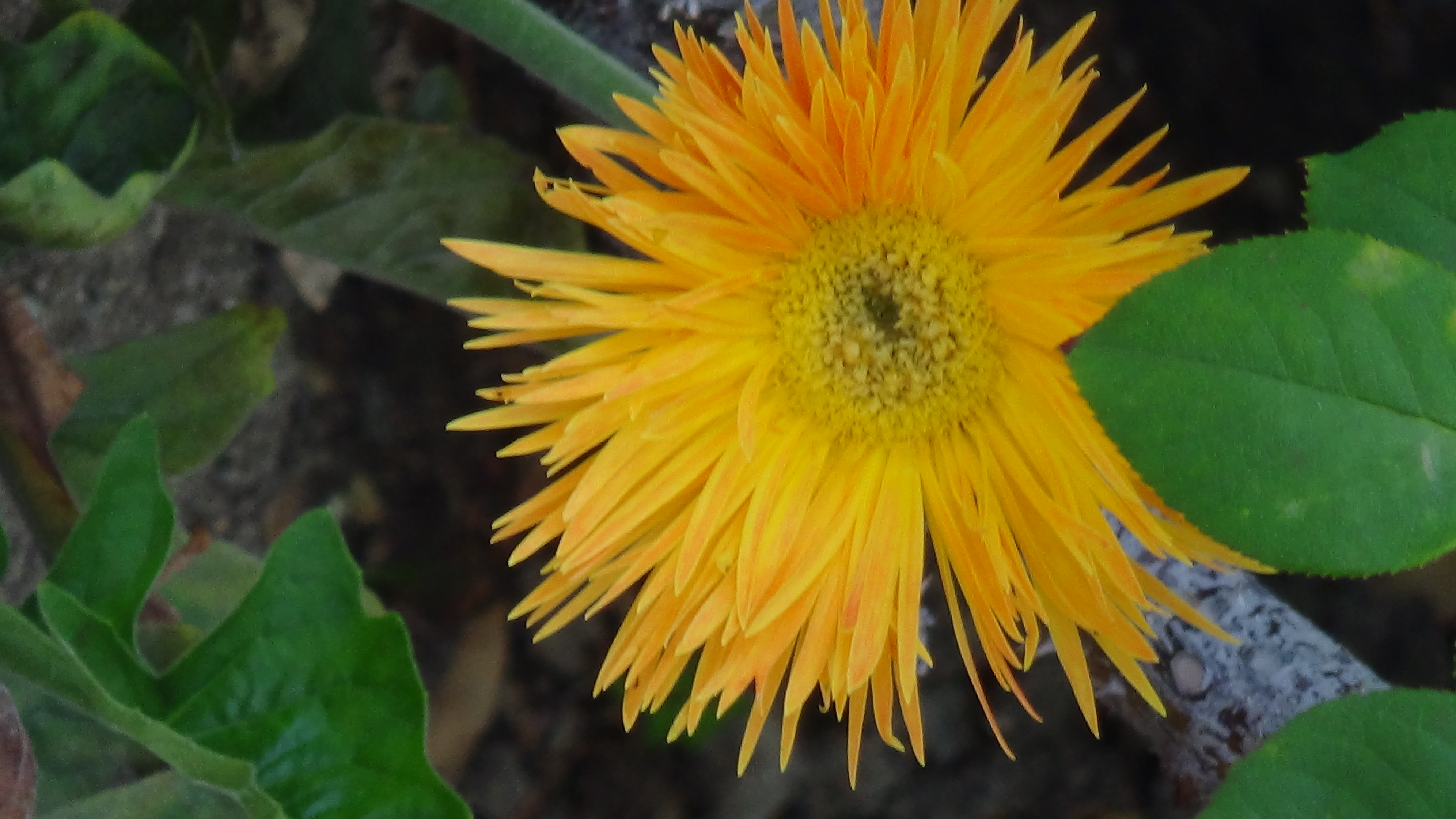 Regarding the catastrophic childhood experience described above, see …