Written and published on 13 February 2015; revised

I know lots of folks are just starting to think about the double torus. I mentioned it in a recent blog, as a way to envision the twin flame connection. What I would compare to electron orbital state n=2, 2p. (1)

We can then envision the two conjoined toruses folding into one torus with two layers … something like Earth’s Van Allen Belt has an inner and outer sheath. What I would compare to electron orbital state n=2, 2s.

In the graphic below, notice, at top, the inner and outer Van Allen Belts of Earth. Can you visualize how the double torus from the Resonance Project might fold into itself and become a double layered single torus, like this?

Image 2: Earth’s Van Allen Belt as a double torus, one enclosing the other (top) and then in the lower image, the triple torus that occurred during the September 2012 Shift. The upper title reads: “a. Typical 2-Belt Structure,” and the lower title reads: “b. New 3-Belt Structure.”  The caption reads: From Science: ‘Diagrams providing a cross-sectional view of the Earth’s radiation belt structure and relationship to the plasmasphere. (A) A schematic diagram showing the Earth, the outer and inner radiation belts and the normal plasmaspheric location. (B) Similar to (A) but showing a more highly distended plasmasphere and quite unexpected triple radiation belt properties during the September 2012 period. These diagrams show the highest electron fluxes as white and the lowest fluxes as blue. The radiation belts are really ‘doughnut’ or torus-shaped entities in three dimensions. The Earth is portrayed at the center. Also shown, as a translucent green overlay in each diagram, is the plasmasphere.’”… https://i0.wp.com/scienceblogs.com/gregladen/files/2013/03/VanAllenBeltDiscovery.jpg?w=600 .. (2)

The bottom image in the above graphic shows what happened to the Van Allen Belt at about the time that the Ascension process (September – December 2012) took place. The Earth’s Van Allen Belt suddenly reconfigured to a Torus with Three Layers. According to Wikipedia, this reconfiguration happened on 28 February 2013, and lasted for about a month …

This image from NASA shows what happened … 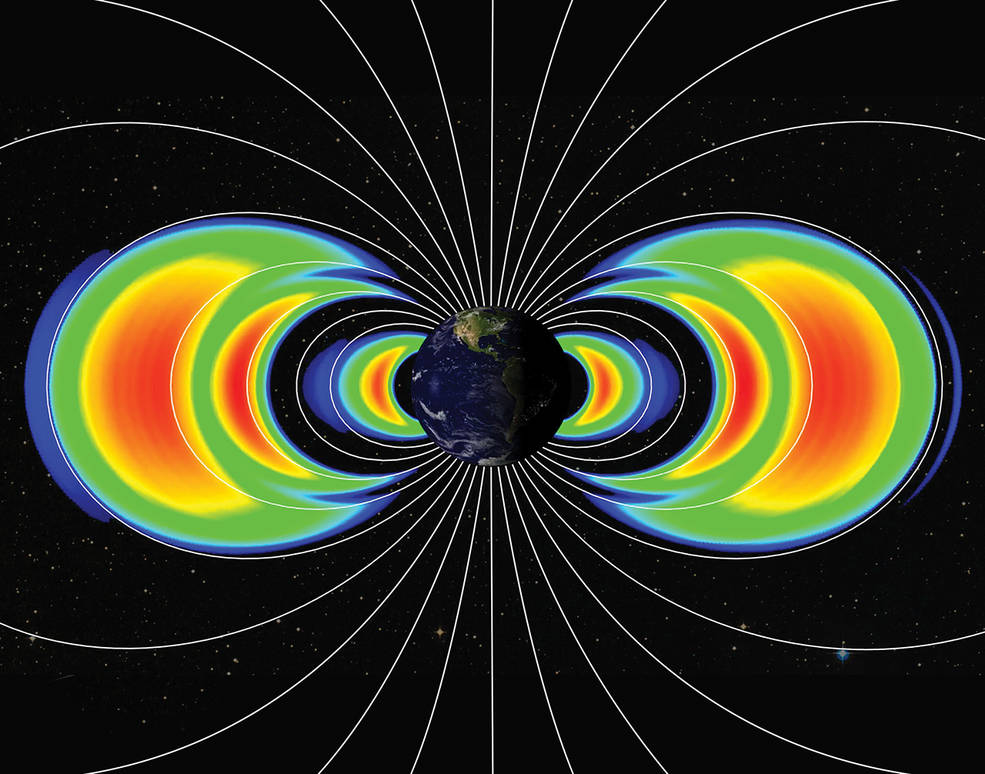 This was at a time when, in 4D, many people were experiencing Trined Love, the Love Triangle, which to the mental mind looks like one of these two, energetically …

And on a personality level, generally manifests as One Big Argument! …

Image 5: Two women and a man sitting on a bench. The first woman has her arm around the man, but the man and the second woman are holding hands behind her back …  https://thumbs.dreamstime.com/x/love-triangle-girl-hugging-guy-holding-hands-another-girl-sitting-together-bench-57582602.jpg ..

Be that as it may, Trined Love is where our planet is now. It is just a beginning, but it is the beginning, of the expansion of our personal energy fields, and that of Earth, to include the most far-flung galaxies. One for All! and All for One, as they say …

LIke the ‘figure 8’ double torus in Image 1 above, the trined torus can be folded back within itself, so that it resembles the triple-layer Van Allen Belt that Earth experienced during the Shift, September 2012 (Image 2, bottom).

Lisa Gawlas, in one of her recent, visionary blogs, has also mentioned the trined energy field, which she calls triangle energy. (3)

Lisa Gawlas has put me onto how this process of expanding from our personal single torus EMF to a double torus, which engulfs the object of our desire, can be part of the process of co-creating the New Reality. Here is a picture she put in one of her recent visionary blogs …

For her, this image had to do with trined energy and the harmonics of creation.

Lisa Gawlas’ understanding of this image spurred me on to a different interpretation of my own: Let’s say the star is Me. I have a thought; an emotion-laden thought. Full of desire, I think of something. The desire is like the series of 5 red dots in the image, each of which forms a V-shape. The series of two blue dots are the ‘thought of two’ … the thought of duality. The creation of ‘I’ and ‘Other’.

To put it another way, the Desire of my single torus energy field sends out a wave of energy (the red dots) which create the Double Torus (the blue dots) … the perception of the Universe … and in this way, the New Reality is created.

Note that the process of co-creation of the new reality is one manifestation of the Trined Torus that we have been experiencing since the Shift … and some of us for much longer. For instance, note the image below: 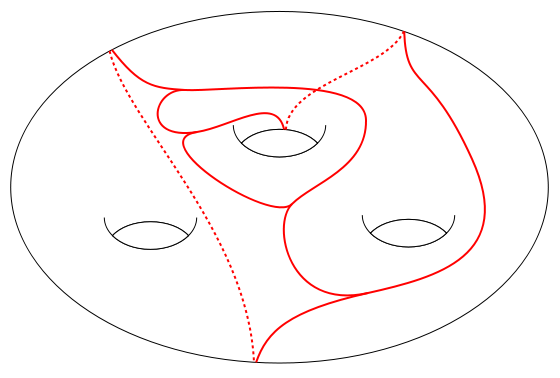 In the above image, note how the three ‘eyes’ form a triangle. The two red-encircled ‘eyes’ might be compared to the pairs of blue dots in Lisa Gawlas’ image (discussed above): https://lisagawlas.files.wordpress.com/2015/02/harmonics.jpg?w=500&h=325 ..

The left-hand ‘eye’ in the above image is like the star in Lisa Gawlas’ image: This is the ‘I’, the personal self, the perceiver of reality and creator of the twined pair that form the current Awareness timeline of the perceived Duality Play.

On Co-Creation of Reality in Alignment with God

When our perception of reality (i.e., the duality or dual torus we create) is co-perceived by another Soul, then this becomes our shared reality. However, the true meaning of the word ‘co-creation’ has to do with the alignment of our Soul with the will of God.

Misperception of co-creation as taking place with two other human beings results from the Soul not being aligned with God. This results in …

A personality mental filter has been is playing out as we learn to co-create the New Reality. It has been seeming like this …

… which is quite a mental filter distortion of the underlying energetics.

THE FLUIDITY OF TRINED LOVE

These energetics of creation are far more fluid, and changeable, like the ripple created by a snag in the bed of a flowing stream. Trined, surely, but not ‘locked in’ like this … 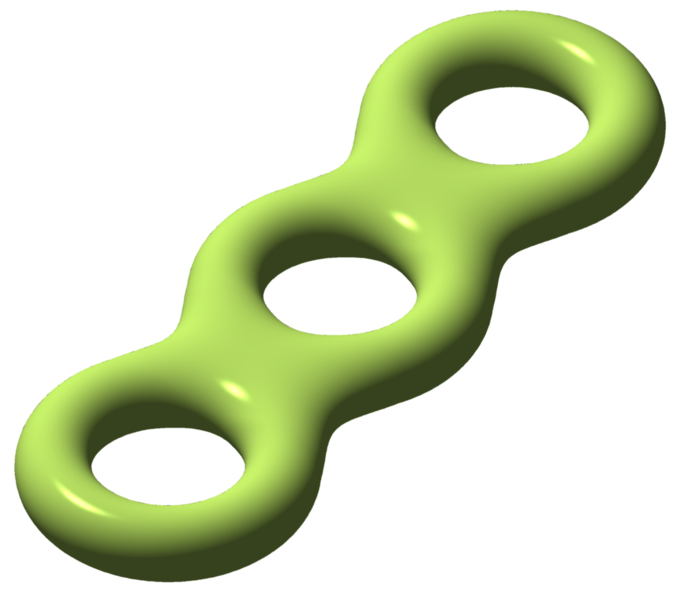 … Rather, as in the video below. Imagine, in the below video, that the boat is you. The wake of the boat, left and right, is the beginning of the triple torus created by a desire-linked thought form. The two legs of the surfer are the Duality, the New Reality, that you co-create:

This is a video about a wakeboarder doing airborne figure eights as he surfs back and forth across the wake of the boat. Although the surfer has two legs … which is to say: Although it seems like reality includes both ‘I’ and ‘Other’ … there is in fact only one beingness, one awareness … one surfer … and that surfer is You.

THE FLUIDITY AND TRANSFORMATIVE POWER OF THE TORUS: CREATING FRACTAL REALITY

In the below video, note how a torus shape can be changed into:

This represents the replicative process of the fractal universe. The agent of this change is not a knife, but rather, will power. And the last shape to which the author refers in the video, the shape that transforms the power of the black hole into whatever is desired … that is the shape of the human heart.

INTEGRATING OR MERGING OUR TIMELINES

The movement of the double torus to the double-layer torus can also explain the integration of two of our timelines. This is a process that is fluidly taking place today.

In the same way, the movement of the triple torus to the triple-layer torus can explain the integration of three of our timelines, which is lIkewise taking place today.

Timelines are alive, and constantly shifting. We can think of it as reaching out, in our consciousness, from the torus that is our energy field. With our imaginations, we latch onto another timeline. At that moment, our personal energy field is shaped like a figure eight double torus.

Then we bring the new timeline into our consciousness, like the two-layer double torus shape. Then, as we place our awareness on the new (and better) timeline, our personal energy fields becomes once more the accustomed torus.

Here I provide this slow motion analysis of the energetics. But know that this all takes place in the flash of an eye. We can rewrite history just like that, and we have done so many times.

ON REWRITING HISTORY, ON DIFFERENT CONCURRENT VERSIONS OF HISTORY, AND ON OPTIMIZING TIMELINES

Lisa Gawlas recently had some tips on rewriting history …

Link: “The Convolution of Timelines. Plus Understanding ‘Walk-Ins,'” by Lisa Gawlas, 11 February 2015 … https://lisagawlas.wordpress.com/2015/02/11/the-convolution-of-timelines-plus-understanding-walk-ins/ … Search the term: Convolution … In that blog, see paragraph 7 (beginning “Your questions trigger…”) through paragraph 13 (ending “…up and out!!”). Here is my short ‘take’ on what she has to say…

This has to do with how history is different in different timelines or dimensions.

Alice B. Clagett on Police, Law Court, Prison, and Criminal Experience of Reality

I have something to add to that: I note that each Soul on Earth is experiencing their own, unique timeline Now. In particular, at this phase of the Ascension of Earth (January 2017), the Police and Criminal Timeline and Dimension are very different from those of the Ascension crowd … much slower pulsating.

This is because the criminal element … felons and so on … have this slower pulsation, and the police, law courts, and prisons must deal with this pulsation, as they are helping to segregate it from the mainstream of society, so that the samskaric tendencies of the criminal element will not be acted out on other people, thus increasing everybody’s Soul wounding.

Though the pulsation of the criminal world, and those involved in mitigating its effect on society, is slower, it is also changing as the Earth arises … Slowly but surely, in fact, inevitably, it will also arise and awaken, as will all the people who are carrying this pulsation, or else dealing with it for the sake of humankind.

Then in the same blog section described above, Lisa Gawlas talks about how we may walk into our own alternate timelines, in the process of Ascending. It is a very interesting read.

ACTIVATION OF LIGHT TO OPTIMIZE TIMELINES

I have also offered an Activation of Light from the Hathors, which I quite frequently use to rewrite my timeline. Here is the activation:

Spirit to Team!
Optimize timelines!
For the All, through Free Will!

Yes! It Is That Easy!

Now when people read about this activation, I can hear them thinking: Awww, pshew! Can she possibly think I’m that naive? Like that’s possible, bro!

It is a bit of a bother, actually. Here they have at their fingertips the secrets of the Universe, and they just do not notice what is there…. On the other hand, I figure, when it is time, it is time… And there will come a day for each of us to know the true majesty of our multidimensionality…

(2) See Link: “It Was So Unexpected that We Thought Something Was Wrong with the Instrument,” by Greg Laden, 5 March 2013 … http://scienceblogs.com/gregladen/2013/03/05/it-was-so-unexpected-that-we-thought-there-was-something-wrong-with-the-instrument/ ..