This is subsection 4.13 “Father of Lies,” of the section “4.0 Qualities of Satan According to the Bible,” from the video series “Satan’s Powers and What to Do About Them,” by Alice B. Clagett. There is an edited Summary after the video …

I have for you today subsection 4.13 of the video series “Satan’s Powers and What to Do About Them,” by Alice B. Clagett. Subsection 4.13 is entitled “Father of Lies.”

As mentioned above, Satan is variously described as the Devil, as Father of Lies, and as a Murderer in John 8:44 …

This is the same verse as that in section 4.12 (described in another blog), but the discussion centers around Satan as Father of Lies.  Here is the comment: Definitely, Satan is a concealer of the Infinite, loving, healing power of God. For instance, Satan can make us believe that we are very beautiful or very handsome; we may become so self-absorbed, so enamored of our finite selves, that we completely forget the Infinite, which is God. For concentrating on the known … which is us in the physical world … we forget the great ‘Unknown’ that is within and without us.

What I am really saying here is that the great lie of life in the third dimension is that we forget the important thing. Satan somehow so enamors us of the physical world, and of the input of our senses, that we forget God from which we came; and we forget our immortal Souls that are within us, and that reflect the grandeur and awe and wonder of God Himself. Somehow, we forget that. We see what is out there, in the physical world, and we become enamored of that lie that is in the physical world, instead of remaining in accord with, in alignment with, and in love with the beauty and grace and joy of God’s presence within our hearts and all around us. 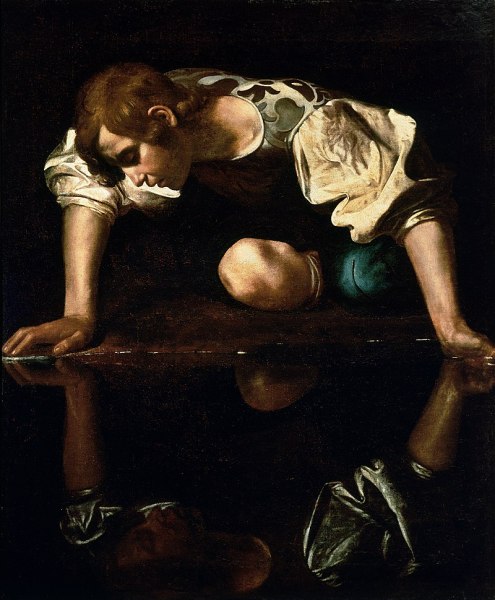 Caravaggio was an interesting individual. Scandal surrounded his life, and the talent of his artistry. I have a few things to say about that. I have to tell you there is some risque stuff in the article, so make your decision to read or not to read in advance. The article is entitled “Caravaggio and Baglione Today: Is Lucifer Transforming to the Light?” by Alice B. Clagett. This blog was written and published on 30 July 2018. You will find out quite a bit about Caravaggio if you go there, I feel. And probably not all of what you hear will be common knowledge …

Link: “Caravaggio and Baglione Today: Is Lucifer Transforming to the Light?” by Alice B. Clagett, written and published on 30 July 2018 … https://wp.me/p2Rkym-9Oh ..

I have run into someone that reminds me of Caravaggio in real life in Los Angeles in the last 20 years or so, and he is written up in my blog under the nickname ‘Castratrux – Basal Vampire’. You can take a look and see what you think.