This is subsection 4.12 “Devil,” of the section “4.0 Qualities of Satan According to the Bible,” from the video series “Satan’s Powers and What to Do About Them,” by Alice B. Clagett. There is an edited Summary after the video …

I have for you today subsection 4.12 of the video series “Satan’s Powers and What to Do About Them,” by Alice B. Clagett. Subsection 4.12 is entitled “Devil.”

Satan is variously described as the Devil, as Father of Lies, and as a Murderer in John 8:44 …

Sometimes ‘the Devil’ is a name for one of the heavenly hosts that fell in Satan’s company. Sometimes, as in the above passage, it is used as a synonym for the word ‘Satan’.

It seems to me there might have been a blending, down through time, of the human and nonhuman images of Satan, so that the idea of Satan came to mean a human being who acted nonhuman, or who might have been influenced by nonphysical nonhuman beings to behave in an unsocialized manner (which is to say, as an ‘antisocial personality’).

In support of this notion, I have for you some images …

The first image is Satan, by one of my favorites, Gustave Dore. It is an illustration from John Milton’s “Paradise Lost,” 1866, found in Wikimedia Commons, and is public domain. Here is Satan looking a lot like a soldier with wings, with an anguished expression on his face; my guess being that me may have just been cast out of the heavenly hosts. He may have just lost that battle. You can see, though, from this picture, that he is mainly human in aspect … 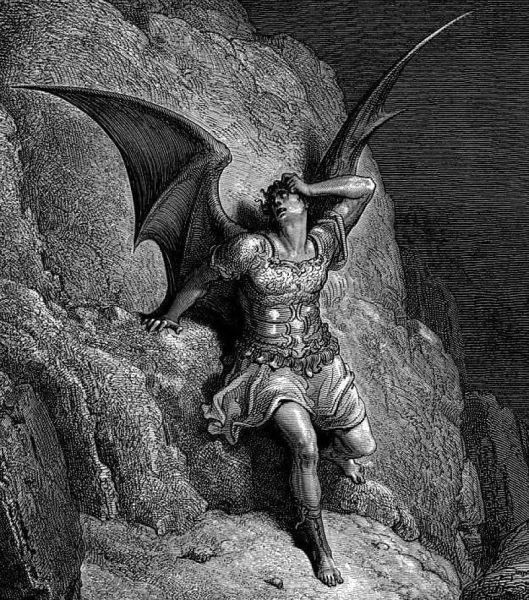 Next I have “Bronze Statuette of the Assyro-Babylonian Demon King Pazuzu,” about 800-700 before the Christian Era, a photo by PGHCOM, 2007, in Wikimedia Commons, with a Creative Commons license. This is a picture of a man who looks to me to have no clothes on, and a strange protuberance or hat on top of his head, an evil expression, one hand raised and the other hand lowered (but both looking rather ferocious; and it looks like he may be wearing boots that look like the feet of birds. The wings are odd: Each wing is two parts. It is quite a striking statue, is it not?

It does not look like a nice man; rather, a ferocious, evil, strong, mean man, maybe with the ability to fly through the air with astral abilities, or maybe a being with astral abilities, or maybe a being that is on the astral plane and not the physical plane. And that strange thing on top of his head is odd, is it not? See the face … the rough scowl? King Pazuzu, a demon  … 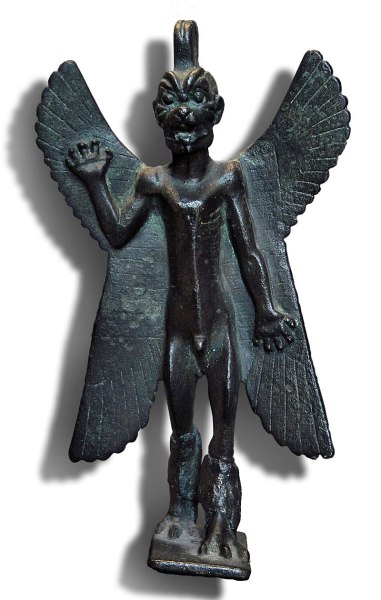 Then I have “Depiction of the Devil Giving Magic Puppets to Witches, from Agnes Sampson Trial.” The author is unknown. It was done in 1591. This is in Wikimedia Commons. which is public domain. There is something of a resemblance in the darkness of the demon, and the feet of the demon. These puppets might have to do with the practice of voodoo. There are also strange birds flying about in the air, making loud noises, it looks like … maybe crows or ravens.

See the similarity to the last picture? Look at the feet; the figure itself. with the wings. It has horns, rather than just one protuberance on top of its head. The face is rather similar. And then there are those strange, flying beings … maybe birds … cawing in the air … 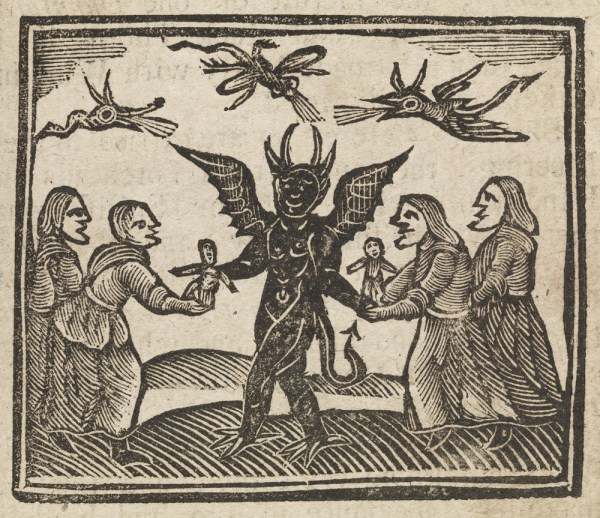 Well, here is the last thought I had about that. This is a drawing I made after an image I saw online of a statue. My drawing is called “Reptilian Star Beings: Lizard Man 2,” by Alice B. Clagett, 27 May 2021, and it is Creative Commons. It was drawn after a sculpture for which I have no attribution; I could not figure out who the sculptor was, but I thought it was a very good sculpture. Here is the image I drew, “Reptilian Star Beings: Lizard Man 2″ … 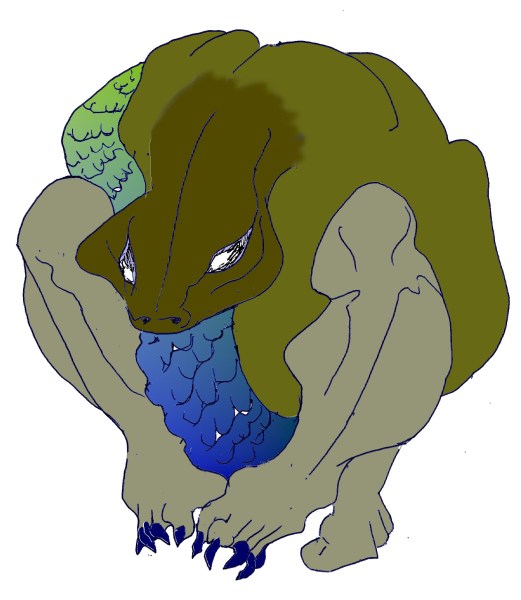 Drawing: “Reptilian Star Beings: Lizard Man 2,” by Alice B. Clagett, 27 May 2021, CC BY-SA 4.0, from “Awakening with Planet Earth,” https://awakeningwithplanetearth.com&#8230; Drawn after a sculpture for which I have no attribution.

Drawing: “Reptilian Star Beings: Lizard Man 2,” by Alice B. Clagett, 27 May 2021, CC BY-SA 4.0, from “Awakening with Planet Earth,” https://awakeningwithplanetearth.com&#8230; Drawn after a sculpture for which I have no attribution.

There are two ideas I have about this image …