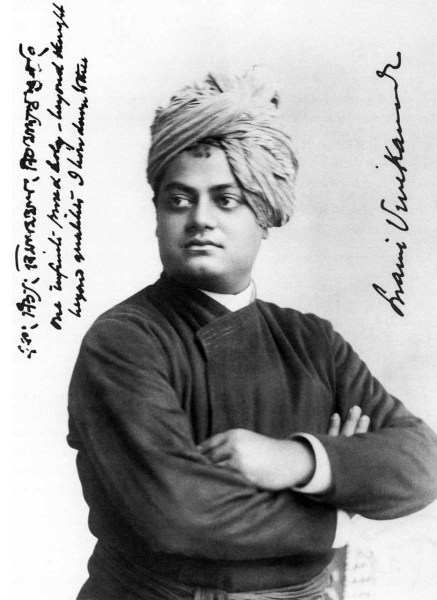 Image: “Higher detail image of Swami Vivekananda, September, 1893, Chicago, On the left Vivekananda wrote in his own handwriting: “One infinite pure and holy – beyond thought beyond qualities I bow down to thee,” uploaded by Dziewa at English Wikipedia, 7 January 2008, in English Wikipedia … https://en.wikipedia.org/wiki/File:Swami_Vivekananda-1893-09-signed.jpg … public domain (This work was published before January 1, 1897 and it is anonymous or pseudonymous due to unknown authorship. It is in the public domain in the United States as well as countries and areas where the copyright terms of anonymous or pseudonymous works are 125 years or fewer since publication.)

Image: “Higher detail image of Swami Vivekananda, September, 1893, Chicago, On the left Vivekananda wrote in his own handwriting: “One infinite pure and holy – beyond thought beyond qualities I bow down to thee,” uploaded by Dziewa at English Wikipedia, 7 January 2008, in English Wikipedia … https://en.wikipedia.org/wiki/File:Swami_Vivekananda-1893-09-signed.jpg … public domain (This work was published before January 1, 1897 and it is anonymous or pseudonymous due to unknown authorship. It is in the public domain in the United States as well as countries and areas where the copyright terms of anonymous or pseudonymous works are 125 years or fewer since publication.)

… I was curious which modern-day organizations might be neo-Hinduist.

“Neo-Vedanta, also called Hindu modernism, … neo-Hinduism, … Global Hinduism … and Hindu Universalism, … are terms to characterize interpretations of Hinduism that developed in the 19th century. Some scholars argue that these modern interpretations incorporate western ideas … into traditional Indian religions, especially Advaita Vedanta, which is asserted as central or fundamental to Hindu culture …

“Among the main proponents of such modern interpretations of Hinduism were Vivekananda, Aurobindo and Radhakrishnan, who to some extent also contributed to the emergence of Neo-Hindu movements in the West …” (1)

Then, through Wikipedia, I researched each of the teachers mentioned as being proponents of this philosophy …

“Vivekananda was one of the main representatives of Neo-Vedanta, a modern interpretation of selected aspects of Hinduism in line with western esoteric traditions, especially Transcendentalism, New Thought and Theosophy …” (2)

Link: “Cosmic Masters and Transmissions,” by the Aetherius Society … https://www.aetherius.org/the-extraterrestrial-message/cosmic-masters/ ..

I read in the article “Explorations in Neo-Vedanta and Perennialism”…

… that the spiritual teacher Paramahansa Yogananda (whose name in childhood was Mukunda Lal Ghosh) was influenced in his spiritual teachings by Swami Vivekananda, which, I feel, is to say, that his teachings had, in part, to do with Neo-Vedanta. Along the same lines, this article …

Link: “Is Kriya Yoga a Vedanta Path?” by Jayadev and Michael, 28 August 2012, in “Your Spiritual Questions Answered Here: Guidance in Meditation, Yoga, and the Spiritual Life” …  https://www.ananda.org/ask/is-kriya-yoga-a-vedanta-path/ ..

… states that Paramahansa Yogananda’s teachings on Kriya Yoga are only partly Vedanta. According to Wikipedia, (3) there are several groups that espouse the teachings of Paramahansa Yogananda in the world today. The original groups were Yogoda Satsanga Society of India (YSS) in India, which is known as Self-Realization Fellowship in other countries.

I checked the Wikipedia article on Sri Aurobindo. (4) From that I was unable to determine which organizations might be associated with his teachings.

The Vallalar and the Superpowers of Omniscience and Omnipresence. As the special psychic abilities of Ramalinga Swamigal, the “Vallalar,” included omniscience and omnipresence, and as use of these superpowers in the noosphere represent special issues for those seeking mastery of mind, I refer you to my blogs on those topics, including …

Satchidananda Yoga Ashram, Yogaville. I have visited at Yogaville in Buckingham, Virginia, a few times. This spiritual retreat was founded by Sri Swami Satchidananda Maharaj, who studied the teachings of Sri Aurobindo, whose method of yoga, Integral Yoga, is taught at Yogaville …

“Radhakrishnan qualified the variety of religions hierarchically according to their apprehension of ‘religious experience’, giving Advaita Vedanta the highest place: …

My notion is that the careful investigator might find much good in neo-Hinduism, but that negatively aspected practitioners of neo-Hinduism might fall to the lure of wealth, sexual gratification, and worldly gain through the use of psychic powers.

This might also be found to be the case in the esoteric practices of other religions, such as Buddhism, Christianity, Islam, and Judaism, were one to delve long and deep.

As to neo-Hinduism, it looks like Swami Vivekananda was the main proponent, and that Transcendentalism, New Thought, and Theosophy are similar to his line of thought. Aetherius Society recognizes Swami Vivekananda as an Ascended Master.

For Sri Aurobindo’s teachings, I am aware of Satchidananda Yoga Ashram, Yogaville. I expect there are others.

For Dr. Radhakrishan, I could not find any related spiritual groups.

So, this is all I have on Neo-Hinduism right now. A topic for further historical inquiry would be news articles from the past, to try and determine whether people in the last century felt that Mind Control and other psychic crime arts were thought to be taught or practiced by these groups, as proposed by Mabel Potter Daggett in the article …

Whether yea or nay, there would be the further inquiry as to what individuals taught or practiced these techniques, and more relevant, whether they be living or dead.

These are topics for another time.

There is another, separate line of inquiry regarding the occult arts and their use … whether for the good of humankind, or for the good of their practitioners … among the Ascended Masters groups, only a few of which I know about.

Thus I took a look online, and read this in a Wikipedia article on Ascended Masters Teachings, and found a few leads about modern-day organizations that might adhere to Ascended Master philosophy.

Research on these organizations might be a place to start, and might provide names of other organizations to look into. My thought is that most, if not all, the people in these groups are earnest spiritual seekers, and not at all into use of the occult arts for personal gain. Rather, I feel it will be discovered that most, if not all of their members seek the betterment of humankind through spiritual upliftment.

The Issue of Ascended Masters and Superconscious Mental Suggestion

This may not be their conscious wish, as they themselves may not be fully awake and aware in regard to their superconscious minds. However, due to their firm spiritual convictions, there may be fractal dissemination to this effect.

It is possible there are fourth dimensional beings in the arena of the transpersonal chakras, who may enter into the fray, in regard to dominion over our Souls through superconscious suggestion.

For more on the inadvisability of mindlessly obeying mental suggestions from beings purporting to be Ascended Masters, see these two links …

(7) from Link: “The Bridge to Freedom,” in Wikipedia … https://en.wikipedia.org/wiki/The_Bridge_to_Freedom ..

Link: “Disclosure and the Fate of Religious Radical Extremists,” by Alice B. Clagett, published on 5 October 2016; revised … https://wp.me/p2Rkym-6dd ..

Link: “On the Perils of Practicing the Occult Arts for Selfish Reasons,” by Madame Blavatsky . with comments by Alice B. Clagett, published on 25 September 2016, updated … https://wp.me/p2Rkym-6bS ..

Link: “On Evading the Awesome Psychic Powers of Mantriks, or Subtle Sorcerers,” by Alice B. Clagett, published on 25 August 2016; updated … https://wp.me/p2Rkym-62J ..