This is the fourth of five videos filmed on the same day. This video has to do with the legend of Leda and the Swan, with the song The Daemon Lover, and with noospheric currents of astral rape.

I am just too chicken to say what this blog is really about, as I fear attack by a Neo-Hindu cult that specializes in mind control and astral rape. However, I have provided a clue about it in the fifth video filmed the same day … Link: “The Catch-22 in Spiritual Names,” by Alice B. Clagett, written on 8 March 2020; published on 7 December 2020 … https://wp.me/p2Rkym-kWF ..

I have something to convey to you, that I have to convey in an extremely roundabout way, for my own safety and for the safety of other people as well. I hope some of you will be able to benefit from it, even though I am speaking very rotundly at the moment.

There was a story once … it was a myth … about a woman named ‘Leda’ and a swan with which she had a love affair, and by which she became pregnant, I think … the story of Leda and the Swan …

Link: “Leda and the Swan,” in Wikipedia … https://en.wikipedia.org/wiki/Leda_and_the_Swan ..

So for people who have a concern about astral rape … otherwise known as psychic rape … on which I have a large section on my website … astral rape is a little like the story of Leda and the Swan, because something that feels like you as a woman are being raped or having intercourse (depending on your receptivity to the notion) flies through the air, and lands, and seems to actually be having sexual intercourse with you. So, in a way, the notion of astral rape is similar to the myth of Leda and the Swan.

There is a very ancient song about The Daemon Lover …

… that was, in recent years, changed into a song about a House Carpenter, with the same tune.

The story of The Daemon Lover is a lot like the story of Leda and the Swan, and also like the stories of astral rape. There is someone that flies through the air, and seems to make love to the woman, and causes her to leave her husband and her children and go off sailing across the seas … possibly in an empty boat … an empty barque … and never to see them again.

She loses touch with her family life, and in my opinion goes off into a world of the imagination because of the daemon lover. 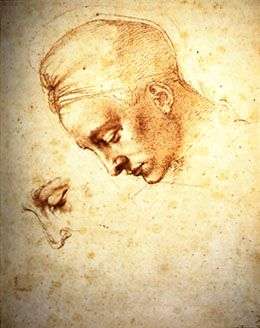 Image: “Study for a Leda,” by Michelangelo Buonarroty, circa 1530, in Wikimedia Commons … https://commons.wikimedia.org/wiki/File:Michelangelo,_studio_per_la_leda,_casa_buonarroti.jpg … public domain … COMMENT: In this painting it is as if Leda is daydreaming; this lends support to the theory that the legend of Leda and the Swan has to do with the legend of the Daemon Lover (‘The House Carpenter’) and the noospheric energies of astral rape.

Image: “Study for a Leda,” by Michelangelo Buonarroty, circa 1530, in Wikimedia Commons … https://commons.wikimedia.org/wiki/File:Michelangelo,_studio_per_la_leda,_casa_buonarroti.jpg … public domain … COMMENT: In this painting it is as if Leda is daydreaming; this lends support to the theory that the legend of Leda and the Swan has to do with the legend of the Daemon Lover (‘The House Carpenter’) and the noospheric energies of astral rape.

This daemon lover is, to my way of thinking, a type of negative astral being that can cause that stimulation of the second chakra, and at the same time, attack through mind control. In a woman, frequently that being stimulates also the heart chakra … giving her a feeling that she is in love with someone, when in fact, there is no one there at all. It can take away her life from her. It can take away her family … her husband and her children. It can turn her to the world of dreams, and remove her feet from Mother Earth.

In a man it can do the same, but not through stimulation of the heart chakra. It tends to degenerate into stimulation of the first and second chakras, and lead to the practice of homosexuality in a manner that descends into sadomasochism.

In both cases, I think, it is good to turn to those anchors of the faith that one has had in childhood … if one is lucky enough to have done so … and use those anchors to prevent the onslaught of these demons.

In addition I would like to say … for those that feel themselves to be arrogant and spiritual teachers … who feel that they are the beautiful swans of this world, and that other people are ugly ducklings compared to them …

Those people are in danger of being consorted with by those demon beings that then turn the people they meet into these paths of unrighteousness … the path of karma rather than that of dharma … if you see what I mean.

I wish you all Godspeed in avoiding them, and in returning to the ways of humankind, and the Light of God’s love and peace and joy, in this time of great Tribulation for humankind.

You know, Tribulation offers various avenues for us; it offers us a chance to grow in faith, or a chance to fall down in despair. It is up to us. If is our free will. We have these choices, moment to moment, in this Time of Tribulation.

God bless you all, and keep you safe.