Written and published on 10 October 2013; updated with images, text and videos during October 2021-January 2022; republished as a separate blog on 28 December 2021
Full title: “Satan’s Powers and What to Do about Them: 6. How to Recognize a Person Who Is Possessed by a Negative Astral Being by the Qualities of That Being Mirrored in the Person” … “6.5 Ruthlessness” . by Alice B. Clagett
Biblical references (if there are any) are in light blue font.

This is subsection “6.5 Ruthlessness,” of the section “6. How to Recognize a Person Who Is Possessed by a Negative Astral Being by the Qualities of That Being Mirrored in the Person,” from the video series “Satan’s Powers and What to Do About Them,” by Alice B. Clagett. There is an edited Summary after the video …

I have for you today subsection 6.5 of the video series “Satan’s Powers and What to Do About Them,” by Alice B. Clagett. Subsection 6.5 is entitled “Ruthlessness” …

On  the astral plane, the obsessed or possessed person may seem to the clairaudient listener to be imbued with the drives of territorial aggression or sexual aggression, to be possessed of a ‘masterplan’ for world domination, or afflicted with the desire to kill or to commit suicide, or evincing the emotions of hatred or fear. From this I gather that negative astral beings also have qualities of aggression, dictatorial intent, murderousness, hatred, and fear.

WHY WOULD OBSESSED OR POSSESSED PEOPLE EXPERIENCE DESPAIR?

You might ask: Why would obsessed or possessed people experience despair? To this I have no response, as I am not convinced that negative astral beings feel despair; rather it may be that they induce a human victim to suicide through creating the emotion of despair, but do not experience this feeling themselves.

WHAT WOULD THE NEGATIVE ASTRAL BEINGS FEAR?

I feel certain that the world of negative astral beings is a ‘dog-eat-dog’ world, in which the strongest lords it over all the rest.

I have an image for you entitled ‘Womans Head,” by Mikhail Vrubel, 1885, from Wikimedia Commons. It is in the public domain, so I can show it to you. Here is the face of a beautiful young woman; but she looks afraid, does she not?  … even terrified, maybe. Here eyes are wide open, and her mouth expresses unhappiness, does it not?

The feeling I got from looking at this image is that there is a negative astral being around her … or maybe possessing her … dipping down into her energy field. She feels it dipping down. And she is afraid of something to which she cannot quite put a name. She is very afraid.  That is my feeling … 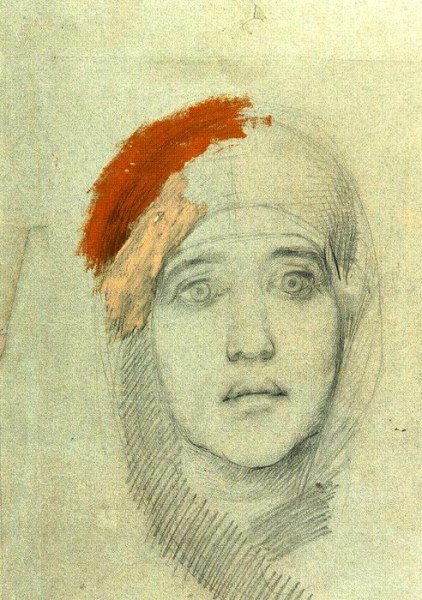 Vrubel has a way of getting down in a painting what people look like who have this trouble of being obsessed or possessed by a negative astral being. I think he did a very good job here with this.

Of course, there are many other interpretations of this painting; but the vast majority of Vrubel’s paintings express similar feelings that I attribute to entity attachment, obsession, and possession by negative astral beings.

So if you see a person that looks like that, you might want to find for them help to ward off whatever it is that is bothering them. (That is if there is no physical manifestation present … as a physical menace would clearly require a physical response.) And by ‘help’ I mean spiritual help … not just some drugs, or something to dull the emotional response and the mental response; but something that really helps the person to overcome whatever it is that they fear; and something that sets them onto a track of purifying their energy field, and strengthening their energy field through the correct lifestyle choices.

In the long run, people whose energy field is weakened or diseased must make themselves well in order to be fully able to ward off these negative influences.