Written and published on 10 October 2013; updated with images, text and videos during October 2021-January 2022; republished as a separate blog on 28 December 2021
Full title: “Satan’s Powers and What to Do about Them: 6. How to Recognize a Person Who Is Possessed by a Negative Astral Being by the Qualities of That Being Mirrored in the Person” … “6.4 Lack of Logical Mind” . by Alice B. Clagett
Biblical references (if there are any) are in light blue font.

This is subsection “6.4 Lack of Logical Mind,” of the section “6. How to Recognize a Person Who Is Possessed by a Negative Astral Being by the Qualities of That Being Mirrored in the Person,” from the video series “Satan’s Powers and What to Do About Them,” by Alice B. Clagett. There is an edited Summary after the video …

I have for you today subsection 6.4 of the video series “Satan’s Powers and What to Do About Them,” by Alice B. Clagett. Subsection 6.4 is entitled “Lack of Logical Mind” …

Do the negative astral beings have logical minds? The answer, most likely, is ‘No’ … because when they obsess or possess a person, the person loses the sense of logic, and descends into invective and repetitive, nonsensical sayings.

ALICE’S PERILOUS TALES: THE JAILHOUSE WOMAN POSSESSED BY A NEGATIVE ASTRAL BEING

I have seen this happen once, as a negative astral being that possessed an older woman … not too old, but older … a handsome women, well made up. It is an image that sticks in my mind to this day, although it happened many years ago. It filled me with determination never to find myself in such a situation.

It was appalling …truly appalling … and I hope you never have to go through such an experience of viewing someone who is possessed by a negative astral entity. It is as if all humanity has been wiped from their minds. There is no more logical mind. What remains is a pathetic attempt to prevent the demon from inhabiting the mind by speaking, over and over again, nonsense terms … In her case, as I recall, it was a short rhyme that quite aptly included the words “I’m in the jailhouse” … or singing over and over again the same refrain … which helps, I feel, to some extent, in the pitiable attempt of a human being in such a situation to fend off the insatiable cruelty of such possessing beings.

Really there is nothing to help us if we find ourselves in this situation, I feel, except for the crucifix, and God’s name, and the protective influence of saints and angels and Christ Himself. There is nothing as strong as those negative astral beings on Earth, except for those beings in the higher dimensions.

On a lighter note, I have an image for you called “Pan,” by Mikhail Vrubel, 1899, from Wikimedia Commons, and it is in the public domain. The thing about Mikhail Vrubel is that he was always painting demonic obsession. And this image of Pan looks like that of a man who has been possessed by a negative astral entity, I feel. (That is not the usual way of depicting Pan.)

I note in particular the use of the flute … it looks like a wooden flute that is held in the man’s hand … might be an attempt by this man, through a singsong, repetitive melody, to ward that being off.

Here is the painting; what do you make of it? Eerie, is it not? Vrubel is always like that … At bottom left is the flute. There is a very strange look in the man’s eyes. And the moon at top right seems to me to be somehow sinister too.

Vrubel had quite a knack for portraying this; and an eye for it too. It seems the only images that he painted had to do with obsession or possession. He was a very unusual artist … 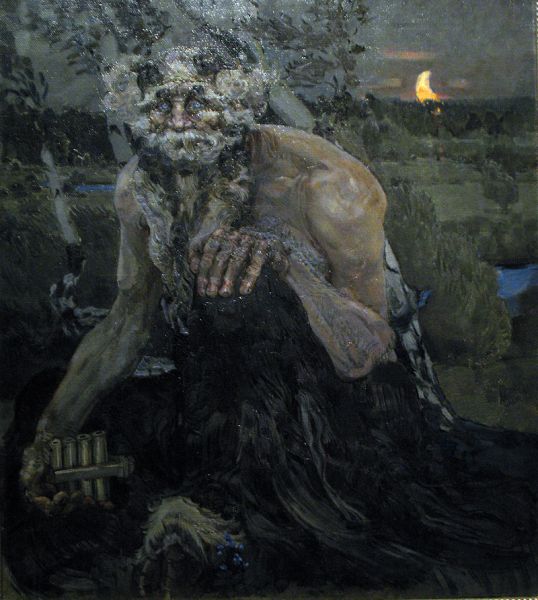 Well, this is three subsections I have recorded during a time of Dark Interference, with repetitive motor noises, and cars going by on an otherwise often deserted street, and airplanes zooming overhead. It has been quite a series of episodes. I hope this will be enough to see us through, until there is a time when the noosphere clears, and the magnetosphere of Earth settles and becomes more balanced. I am hoping that some of the remaining episodes in this series can be filmed under more peaceful and uplifting conditions.

Meantime, this is a chance to get on video what it is like to film during a time of Dark Interference. I hope that, as Lightworkers, you all are able to develop a sense of humor about it. As Lightworkers I think we have to do that. As we start off as Lightworkers, we tend to think that demons come round and bother us during times of X-flares and incoming Solar wind gusts and like that.

It does seem like that, but in fact you can also take it that the energies of Earth are simply leveling up and sorting together and achieving a new balance. I feel that to be an easier way to deal with the ups and downs of Light and Dark here on Earth.