Written and published on 10 October 2013; updated with images, text and videos during October 2021-January 2022; republished as a separate blog on 30 December 2021
Full title: “Satan’s Powers and What to Do about Them: 6. How to Recognize a Person Who Is Possessed by a Negative Astral Being by the Qualities of That Being Mirrored in the Person” … “6.15 A Comely Human Form, a Sweet Voice, Wealth, Power in the World, Fame, and Wearing of Prada” . by Alice B. Clagett
Biblical references (if there are any) are in light blue font.

This is subsection “6.15 A Comely Human Form, a Sweet Voice, Wealth, Power in the World, Fame, and Wearing of Prada,” of the section “6. How to Recognize a Person Who Is Possessed by a Negative Astral Being by the Qualities of That Being Mirrored in the Person,” from the video series “Satan’s Powers and What to Do About Them,” by Alice B. Clagett. There is an edited Summary after the video …

I have for you today subsection 6.15 of the video series “Satan’s Powers and What to Do About Them,” by Alice B. Clagett. Subsection 6.15 is entitled “A Comely Human Form, a Sweet Voice, Wealth, Power in the World, Fame, and Wearing of Prada” …

Often I see that human beings who are very handsome, very beautiful, or have a beautiful voice, or a comely, attractive manner, or who have a position of power in the world, or who are very wealthy or very famous, are prime targets for negative astral beings. Why is this?

My thought is that these qualities make it likely that people will know lots of other people, and this will increase the likelihood that negative astral beings can glom with the Soul wounding of all the people who are attracted to these prime targets, creating a ‘feeding frenzy’ of the Dark.

I have for you an image entitled “Tamara and Demon,” by Mikhail Vrubel, 1890, in Wikimedia Commons, and it is in the public domain. It is another eerie picture by Mikhail Vrubel. There is a beautiful, young woman, gazing entranced … almost as if she were in a trance … at a demon who is very close to her, looking her directly in the eyes. And the demon has an odd look on its face … a predatory look, I feel. The young lady looks completely accepting of the demon, as if she trusts it and believes in it. Right much of a spookout, this picture … 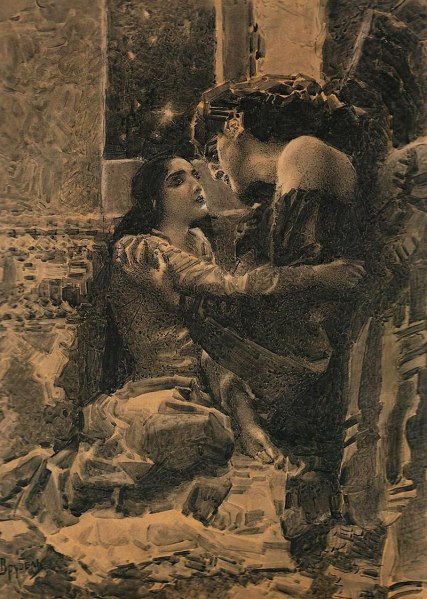 THE SOUL LESSON OF A LIFETIME OF BEAUTY, WEALTH, POWER, OR FAME

While it is not universally true, it may sometimes be true that people who request a comely human form, or power in the world, or great wealth or fame on incarnating, may be asking their guardian angels for the ‘wrong thing’. They may be making a wish that will interfere with their Soul evolution … a wish that will not bring them closer to God Awareness.

In order to show them what is more true, and more desirable, than a comely form, a beautiful voice, a great deal of wealth, or power in the world, or fame, God may offer them, as a ‘tough love’ teaching mechanism, the hellworld experience of obsession or possession by the negative astral beings.

I have for you an image entitled “Satanic Image,” by Odilon Redon, 1885, in Wikimedia Commons, public domain. It is a shadowy man with his head downcast, looking, in fact, somewhat despondent … maybe even despairing. Overall, I get an image of doom and gloom and despondency.

Maybe this is the picture of a man who has chosen something superficial on incarnating, such as fame or power or good looks, and then finds conflict with Satanic incursions, and then becomes despondent. That was my thought about it … 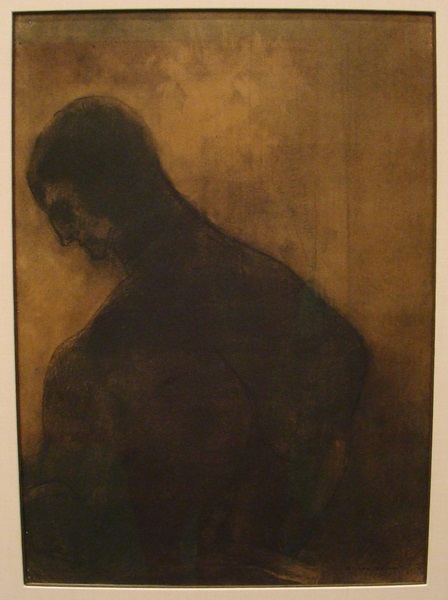 As far as the negative astral beings themselves are concerned, in regard to comeliness, the beauty (the great deceptiveness or trickery) of the voice, I feel that they value these very much. I have also found that one of the fastest ways to get a negative astral being to ease off on the ‘Soul snacking’ … temporarily … is to say …

My, what a comely man you are!
How elegantly you are dressed!
How fine your shoes are!

Negative astral beings apparently are calmed by this, in some way. Perhaps, through long association with humankind, they have come to regard themselves as very good looking men, who are very well dressed, and cut a fine figure in the world, even though they are not human beings.

In other words, the negative astral beings can snack on them … and also feel good about being near them, because they apparently perceive themselves as being rather like them.

I have for you an image entitled “Demon (Sitting),” by Mikhail Vrubel, 1890, from Wikimedia Commons, in the public domain. You can see the same demon as was featured in the duo with the beautiful young woman looking adoringly at the demon … or else his younger brother. This might be a demon that haunted Vrubel himself, I feel, on the psychic plane … a very good looking, muscular, healthy, toned, young male demon (I guess) … or a demon that looks like a man. I note that his arms describe a heart.

He is somehow extremely attractive, and extremely menacing at the same time. I think it is the look in the eyes, perhaps … or the way that the mouth is … 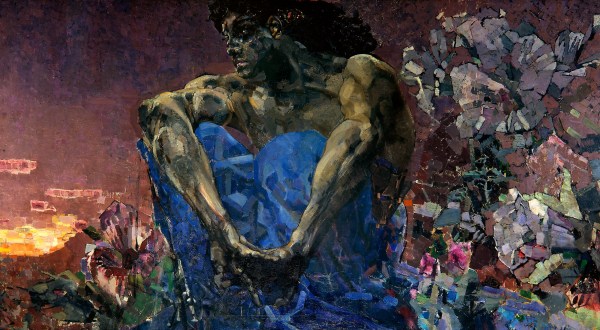