Written and published on 10 October 2013; updated with images, text and videos during October 2021-January 2022; republished as a separate blog on 30 December 2021
Full title: “Satan’s Powers and What to Do about Them: 6. How to Recognize a Person Who Is Possessed by a Negative Astral Being by the Qualities of That Being Mirrored in the Person” … “6.14 Tremors in an Obsessed or Possessed Person’s Extremities” . by Alice B. Clagett
Biblical references (if there are any) are in light blue font.

This is subsection “6.14 Tremors in an Obsessed or Possessed Person’s Extremities,” of the section “6. How to Recognize a Person Who Is Possessed by a Negative Astral Being by the Qualities of That Being Mirrored in the Person,” from the video series “Satan’s Powers and What to Do About Them,” by Alice B. Clagett. There is an edited Summary after the video …

I have for you today subsection 6.14 of the video series “Satan’s Powers and What to Do About Them,” by Alice B. Clagett. Subsection 6.14 is entitled “Tremors in an Obsessed or Possessed Person’s Extremities” …

I think this is because, until quite recently, there has been a kind of semi-sentient malware out there, that looked like an octopus or a jellyfish. It was only astral, not physical; it could land on a person’s head, on the astral plane, and invade the astral equivalent of the central nervous system (the CNS). And this invasion of the astral CNS, I feel, most likely caused those tremors.

As I understand it, those beings no longer exist on Earth. I am certain that they were imported, and/or created, and used by the negative astral beings to control and master humankind in the times before the Shift and before the beginning of the Ascension process.

The Description of the image is below … 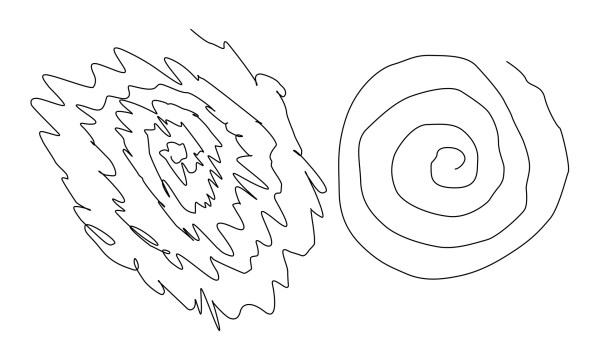 Image: “Archimedean Spirals Drawn by a 22-Year-Old Male Suffering from Unilateral Essential Tremor,” by Svenskbygderna, 1 May 2019, in Wikimedia Commons … https://commons.wikimedia.org/wiki/File:Spiral_drawing_of_Essential_Tremor_patient.svg … CC BY-SA 4.0 International … DESCRIPTION: “The spiral on the left was drawn by the subject using his left hand, and the one on the right with his right hand.”

DESCRIPTION: “The spiral on the left was drawn by the subject using his left hand, and the one on the right with his right hand.”

Now this is not really descriptive of astral attack by a demon; but it indicates the type of loss of muscular control that Christians speak about, when they have noticed people who are attacked in this way sometimes have tremors of the extremities (in addition to other signs).

It does not mean that everyone with tremors of the extremities is under demonic attack, of course.

Link: “Sleeper,” in Energetic Synthesis … https://energeticsynthesis.com/library/negative-alien-agenda/transhumanism-and-ai/3015-sleeper … This article mentions muscle twitches (i.e., tremors) as being related to ‘Sleeper’ programs that stimulate responses such as rage, panic, and addiction (and apparently, coincidentally, muscle twitches) in the person in whose energy field the programs are implanted. These programs are designed by negative astral beings as Biological Warfare weapons.

This article also explains a little about the Negative Alien Agenda astral rape mind control techniques that weaken a person’s energy field by inducing false memories of rape  … or else, I feel, by inducing the false notion that the astrally induced stimulation of the victim’s sexual organs is caused by someone that the victim loves in real life … when in fact it is an energy ‘feeding’ program devised to render the human energy field edible to negative astral beings (as I have described elsewhere).