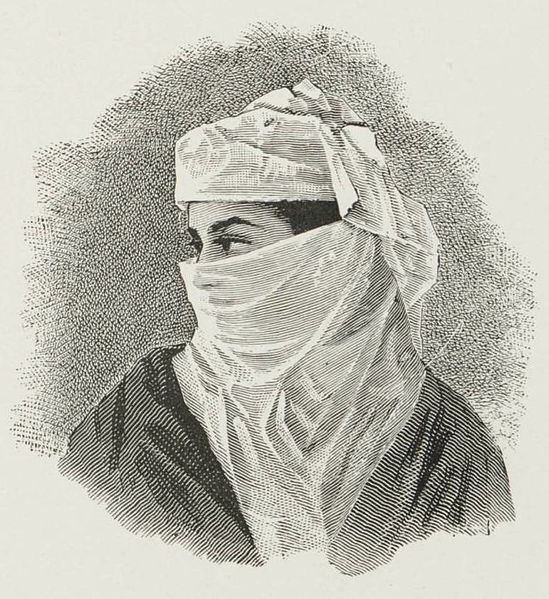 Image: “Bust of a woman wearing a white head-covering that reveals only her eyes,” by F. C. Welsch, from “Egypt: Descriptive, Historical, and Picturesque,” Vol. 1, by Georg Ebers, 1878, in Wikimedia Commons … https://commons.wikimedia.org/wiki/File:A_Veiled_Beauty_(1878)_-_TIMEA.jpg … CC BY-SA 2.5 Generic

Image: “Bust of a woman wearing a white head-covering that reveals only her eyes,” by F. C. Welsch, from “Egypt: Descriptive, Historical, and Picturesque,” Vol. 1, by Georg Ebers, 1878, in Wikimedia Commons … https://commons.wikimedia.org/wiki/File:A_Veiled_Beauty_(1878)_-_TIMEA.jpg … CC BY-SA 2.5 Generic

Below are links to one series in a number of astral stories I encountered that involved the catastrophic childhood case studies … in this case, that of ‘Veiled Beauty’, an intelligent, classy, and very beautiful mind controller and confidence woman who may have taken the place of ‘Alluring Calm’ as head of the West Los Angeles mafia in about the year 2015.

I have a hunch that ‘Veiled Beauty’, like her putative predecessor ‘Alluring Calm’, lives by her wits, and might have no compunctions about using mind control and false authority to sucker women who had recently lost a loved one into parting with their cash.

When I met her, she was a member of a meditation group in West Los Angeles with roots in both Hindu black arts and a dark perversion of the teachings of the sacred Jewish Kabbalah. In addition to ‘Alluring Calm’, her husband ‘Headstand Man,’ and ‘Veiled Beauty’, I remember three women in the West Los Angeles meditation group; these I have nicknamed ‘Arts and Crafty’, ‘Class Act’, and ‘Poseur Inveigler’.

During the time I became aware of this ‘cult that kills’ the predominant MO (modus operandi) … as the astral airs would have it … apparently was to ‘down’ one or two of these women annually with a trumped up psychological label, arrange for institutionalization and at that moment abscond with the woman’s cash; then hire a ‘hit woman’ from the central headquarters of the group to pose as an ancillary health care worker who would visit the institutionalized ‘mark’ and murder her with an undetectable drug injection.

All these people were very respectable looking to me, and seemed like all the other good folks I knew. It is hard to make sense of how the astral airs diverged so greatly from what I saw of them with my physical eyes.

On the other hand, sometimes people are what they call ‘two-faced’. They may appear to be one way, and really be quite different. If that was the case with ‘Veiled Beauty’, then that might account for the awful psychic commotion and dreamtime clamor that happened for me when I was attending meditations in which she participated.

For instance, at every one of the meditations I attended with the West Los Angeles meditation group, I experienced what seemed to me to be an attempt at trance induction, maybe with intent to murder me should they have succeeded in rendering me senseless. I experienced the same partial ‘psychic swoon’ when I attended meditations led by her boss ‘Heart Vampire’ in the central region of the United States. These states were completely new to me … I never experienced them before or since. From that I infer … whether rightly or wrongly … that the long-time members of these meditation groups might have been the agents of these untoward setbacks to my psyche. For more on that, search ‘swoon’ below.

I gathered from the astral airs that ‘Veiled Beauty’ and several other women in her meditation group excelled in the art of seducing men, with an end to personal gain.

After I left the group I heard an astral story that I found especially painful … that either the woman I nicknamed ‘Alluring Calm’ or her cohort ‘Veiled Beauty’ (posing as her), had a sexual encounter with a male friend of mine under the pretext they might teach him something that would help him grow closer romantically to me.

If that were so, it would have been an interesting story in the bag of tricks of wily women, as sexual encounters create ‘psychic bonds’ between those involved; they do not strengthen ‘psychic bonds’ with people not involved in the sexual encounter; or so I feel. In other words, on the pretext of doing good, the woman apparently was exercising a ‘divide and conquer’ or ‘isolate and overcome’ strategy known amongst the confidence gamesters as ‘the cull’. I was ‘the cull’ to be winnowed from friends and family through the practice of allurement and ‘double-faced’ techniques … looking good, but with intent to do bad. Or so it seemed to me, in retrospect.

I notice from the below blogs that there is quite a lot of overlap with the blogs in other catastrophic childhood case studies. For easy reading, I have included all the ‘Veiled Beauty’-related blogs here. Please excuse the repetition; I hope, though redundant, it will prove useful for the reader who wants to delve into the one nickname alone, and not the others.

There is a much fuller set of pertinent blogs nicknamed ‘Heart Vampire’, as that person, according to the astral airs, was the leader of the group. For the relationship of ‘Heart Vampire’ to the members of the group, see this blog, which is also included in the catastrophic childhood case studies of his followers … Link: “United States Mafia Organizational Chart: Key to Nicknames,” by Alice B. Clagett, drawn and published on 10 February 2021; revised … https://wp.me/p2Rkym-lrx ..

For the ‘Veiled Beauty’ series of blogs, see below …

Below are all the blogs in the series “Catastrophic Childhood Case Study: ‘Veiled Beauty’.” The blogs are in chronological order; the most recent blog is at the bottom of the list.

For the reader who is looking through all the catastrophic childhood case studies, nickname by nickname, In the tables of contents I have bolded blog titles that seem more unique to the nickname in question. If you see no blog titles bolded, then I consider none of the blogs to be relatively unique.

Link: “Implantation of False Childhood Memories Through Hypnosis,” by Alice B. Clagett, written and published on 19 April 2020 … https://wp.me/p2Rkym-hDc ..

Link: “Alice’s Perilous Tales: Demon-Powered Levitation of a Student?” by Alice B. Clagett, written and published on 1 July 2021, revised … https://wp.me/p2Rkym-nEw ..

Link: “Psychic Swoon as Practiced by Neo-Hindu Cults That Kill,” animated gif by Alice B. Clagett, written and published on 23 August 2021 … https://wp.me/p2Rkym-oRB ..

Compiled and published on 20 October 2021