This video is about stepped-up energies. After the video is an edited Summary.

How the Human Energy Field Steps Up Energies

My subject right now is stepped-up energies. As you know, the energy field of the human being is designed to step up energies from the first dimension and on up to the twelfth dimension. The traditional way that happens is through the gears of the chakras, which raise and transform the kundalini energy from the deep densities of the central core of Earth, all the way up to the Central Sun.

Chakras Are Gears That Sift the Energies

The chakras represent gears that sift the energies so that they become ever more refined on the astral and other subtle levels. The first chakra, old-style, had four petals, and it sifted a very large grade of astral energy (which is what is employed by that chakra). And on up to the thousand-petal lotus at the top of the head (the crown chakra … the top chakra old-style), which produced and refined very subtle astral and other subtle body energies.

So you see, we have within us, along the central vertical power current, gears known as ‘chakras’, which sift and change the energies that are transformed and utilized by the human energy field … from the lowest and least refined, and coarsest and densest, representing our most grounded state on Earth, all the way up to the very highest.

Chakras Represent Densities That May Be Conceived of as Dimensions

As I mentioned, each chakra represents a density.

Which chakra we place our awareness on determines which type of energy we are transforming or transforming other energies into. Typically, Lightworkers concentrate on the heart energy and transform everything to love, which is the center of the human energy field.

On Asking Our Celestial Team to Bring Down Energies

Above the fourth chakra, we have chakras that our celestial Ascension Team can help us to bring down energies from the Central Sun and step them down into the heart chakra, where we can transform the deeper, denser energies … what some call misqualified energies or negative energies … that are surfacing up from the depths of astral Earth today for transformation.

So when we call upon our celestial Team, we are likely to intercept beings of various dimensions higher than the heart chakra that will step down Central Sun energy (just as we step up energy through our own chakras). They will step it down to our heart chakra, which is the great Transformer.

So that is a great advantage of our celestial Team: We do not have to go through that whole process, which can be kind of lengthy, starting with way high above our heads, and stepping down, down, down to the heart chakra, and then pulling up the other energy. We can ask for that help; that Divine help … the helpers assigned by God, who bring grace from him to us.

On Lightworkers Teaming Up to Transform Energies, Each Concentrating on a Separate Chakra

Lightworkers, Ascensioneers, and wayshowers can also work together … some processing the very lowest levels of misqualified energy that are on Earth today, and bringing them to the awareness of other Lightworkers who bring that up through the third chakra, the will-power center, and on up to the heart center, where there are those who excel in that energy.

So, by noticing the energies that our other Lightworker friends and companions are producing, we can help to gear up the most dense, misqualified, hellworld energies on Earth today, and bring them to the awareness of the heart chakra.

It is kind of like those primitive mechanisms for bringing river water up to irrigate fields … the moving of water from one level to the next level; then for high banks, up a little higher, and on, to the level where it can be poured out and sent through furrows to irrigate fields. I think maybe in ancient Egypt? And this technology could still be used today on fields, were it necessary. 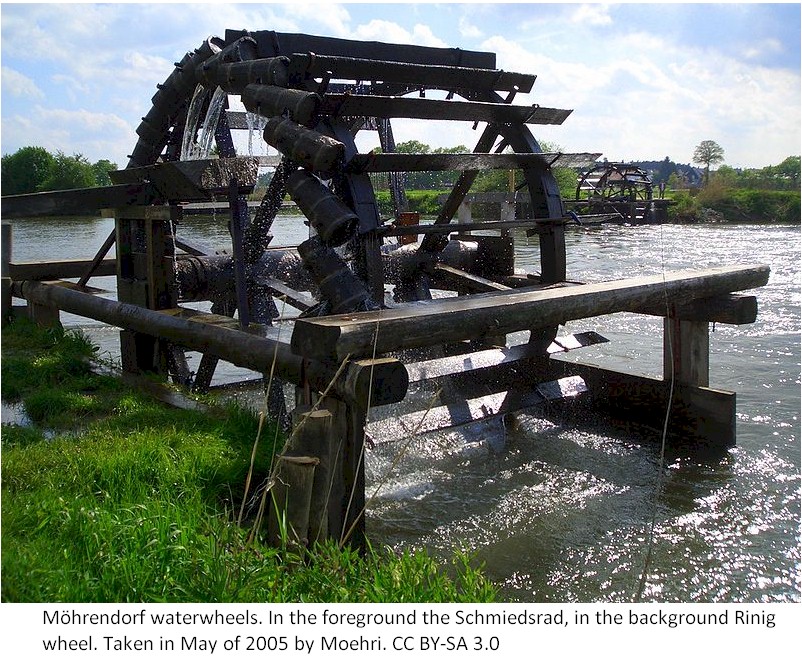 Image: “Möhrendorf waterwheels. In the foreground the Schmiedsrad, in the background Rinig wheel. Taken in May of 2005 by Moehri, in Wikimedia Commons … https://commons.wikimedia.org/wiki/File:M%C3%B6hrendorf_Wasserr%C3%A4der_Schmiedsrad.jpg … CC BY-SA 3.0

Image: “Möhrendorf waterwheels. In the foreground the Schmiedsrad, in the background Rinig wheel. Taken in May of 2005 by Moehri, in Wikimedia Commons … https://commons.wikimedia.org/wiki/File:M%C3%B6hrendorf_Wasserr%C3%A4der_Schmiedsrad.jpg … CC BY-SA 3.0 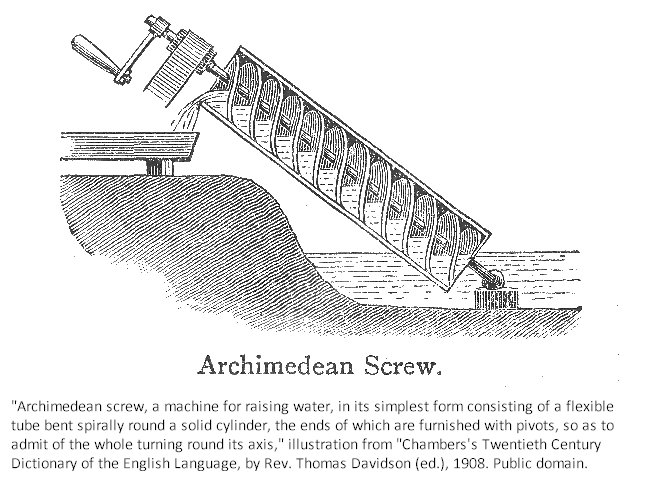 Image: “Archimedean Screw,” illustration from “Chambers’s Twentieth Century Dictionary of the English Language, by Rev. Thomas Davidson (ed.), 1908, public domain … DESCRIPTION: “Archimedean screw, a machine for raising water, in its simplest form consisting of a flexible tube bent spirally round a solid cylinder, the ends of which are furnished with pivots, so as to admit of the whole turning round its axis.”

DESCRIPTION: “Archimedean screw, a machine for raising water, in its simplest form consisting of a flexible tube bent spirally round a solid cylinder, the ends of which are furnished with pivots, so as to admit of the whole turning round its axis.”

And in the meantime, we can use this principle to dip down into the lowest chakric energies and bring them up, for transformation through the heart.

Of course we can also, on our own, single-handedly, use the root lock, diaphragm lock, and neck lock (which together constitute the Great Lock of kundalini yoga) to bring the energies of the kundalini up through the central vertical power current (previously known as the ‘kundalini’ current) along the path of the spine, and that way transform the world.

So there are many different techniques that can be used: Individual techniques, or teamwork techniques, both with other Lightworkers who are in form, and also with our celestial Ascension Teams.

Transformational Work in Synchrony with Other People’s Ascension Teams

Or we can work with the Teams of other people too, using the activations of light that I have provided previously, such as …

Spirit to Team!
Team to Teams! [that is celestial Ascension Teams] Teams to Spirits! …

and then come up with a request for a certain type of work. Like …

Let us tranform all the misqualified energy around the issue of money and abundance Now!
For the All, through Free Will!

and then say:  Separate!  [so that our karmic lines are separate]

And that is just one example of a teamwork activation of Light.

………………..
Sidebar: Bucket Elevators, the Buckets Along Our Spine, and Grading of Aggregate through Sifting

Bucket elevators, Persian wheel, and norias: The swift flow of the water in the river pushes on the paddles, which lift the water wheel and the attached buckets. When the buckets near the top of the wheel, their water automatically dumps into a slightly declining trench that carries the water away. See http://www.fao.org/docrep/010/ah810e/AH810E05.htm ..

Rotary aggregate washing and classifying system: https://www.google.com/patents/US8381916  … and …  https://patentimages.storage.googleapis.com/US8381916B2/US08381916-20130226-D00000.png … This is a patent on an invention to sift aggregate so that different sizes of rock drop into different bins. Looks like it uses an Archimedes screw as well. This reminds me of the way the chakras sift out various grades of astral matter for use by our chakras.