Written and published on 10 October 2013; updated with images, text and videos during October 2021-January 2022; republished as a separate blog on 23 December 2021
Biblical references (if there are any) are in light blue font.

This is subsection 4.4, “Satan Causes Men to Lie,” of the section “4.0 Qualities of Satan, Demons and Devils According to the Bible,” from the video series “Satan’s Powers and What to Do About Them,” by Alice B. Clagett. There is an edited Summary after the video …

I have for you today subsection 4.4 of the video series “Satan’s Powers and What to Do About Them,” by Alice B. Clagett. Subsection 4.4 is entitled “Satan Causes Men to Lie.”

I have a Biblical quote for you from Acts 3, King James Version, public domain, verses 1-3. It goes like this …

This attribute of Satan, of causing men to lie, goes along with his quality of being a deceiver. He is a tricky guy, and he causes people to be full of tricky double-speak as well. Some say he does this by installing malware and malspeak ‘velcro’ wherever he can in our Soul fields; and this, they say, turns our very truthful quarks and sparkly bodies of Light slightly mottled. So they say!

I have for you one image called “Trickster,” a print on paper by Bill Lewis in 1992. It is in Wikimedia Commons, CC BY-SA 3.0 Unported. For some reason, this image reminded me of the description of Satan as causing men to lie. It looks like this … 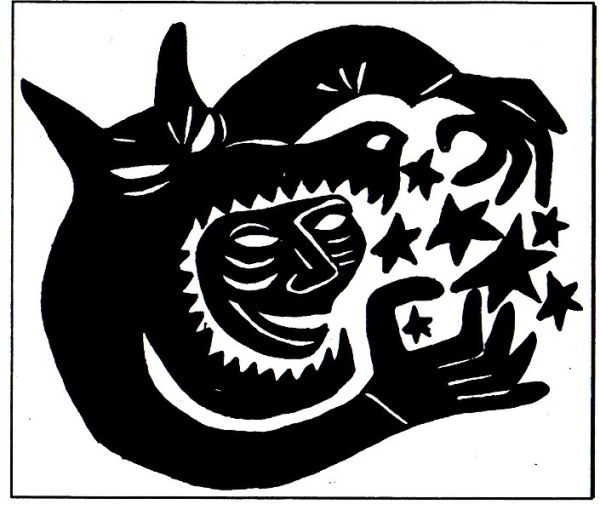 Dramatic, is it not? It is like a fox that is a man, with a ‘happy look’ that he is projecting through magic, it looks like (with the stars) … So, maybe a fox or a wolf, opening his mouth, getting ready to eat the happy person to whom he is talking; or else opening his mouth and pretending to be a happy, good person … and yet, ready to grab with his hands something that is not his own.

So you might think of this woodcut as being Satan, or as being a quality of a person who listens to him and becomes a little more like him, as far as his body of Light is concerned, I feel … the Trickster.