This is subsection 4.14 “Murderer,” of the section “4.0 Qualities of Satan According to the Bible,” from the video series “Satan’s Powers and What to Do About Them,” by Alice B. Clagett. There is an edited Summary after the video …

I have for you today subsection 4.14 of the video series “Satan’s Powers and What to Do About Them,” by Alice B. Clagett. Subsection 4.14 is entitled “Murderer.”

The Biblical verse for today is the same as that for the last two sections. It is  John 8:44 …

As mentioned above, Satan is variously described as the Devil, as Father of Lies, and as a Murderer in this verse. So this is the same verse as was discussed priorly, but today we are concentrating on the aspect of Satan as murderer.  Here is my comment …

Of what is Satan the murderer? I feel he is the murderer of our understanding of what is true. When our bodies are not in a state of Satanic wounding, we are far longer-lived. And in our true state, in our Soul essence, we are eternal.

The Biblical story of the Garden of Eden is about knowledge of good and evil, introduced to Eve by Satan in the form of a serpent. A serpent is a type of reptile. You may recall in the last section I spoke of Satan as a Reptilian Star Being, or perhaps as some being that creates in humankind a hybrid or nonhuman mindset and emotional set that might be termed the antisocial personality.

In the story of the Garden of Eden there is also mention of a reptile that is like Satan … the serpent that tempts Eve. I have a picture for you of just that moment. The title is “The Temptation and Fall of Eve (Illustration to Milton’s ‘Paradise Lost’,” by William Blake, 1808, from Wikimedia Commons, and it is public domain.

You should be aware this is of Adam and Eve without any clothes whatsoever on (I am warning you in advance) and of a mean-looking, alluring serpent that is tempting Eve to eat this fruit; and Eve falls for it. Here is the picture … 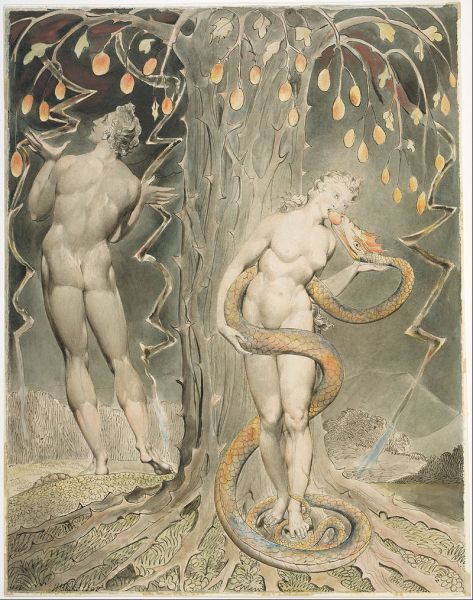 You can see the serpent twining around Eve; and she looks as if she has been hypnotized, does she not? … as if she is opening her mouth without even knowing that she is doing it, and eating this fruit. It looks as if Adam has also been hypnotized and has turned the other way … maybe through mind control or mental suggestion by the serpent? … so that he cannot help Eve to avoid this temptation in this unfortunate tableau.

You know, knowledge of good and evil has to do with the world of Duality … the third and fourth dimensions here on Earth … the physical realm and the astral realm. By concentrating on Duality, we lose our vision of God within and without us. Thus it may be said that Satan ‘murders’ our knowledge of our own God-like nature, of the eternal Soul within us. He is the murderer of that indwelling truth, and the father of this, the greatest of lies: that we mortal human beings are all that is worth considering.

While the powers of Satan are small with regard to those of the Angelic forces, yet his wiles are much too wily for most humans to deal with. To overcome his lures, we must call upon God and the Angels. Yet how may we do this if we never look beyond our personal, physical forms? By ignoring our greatest allies in the realm of Duality, we may lose a lifetime in listening, all unawares, to the false admonitions of the Satan world.

Jesus, on the other hand, who always called upon his heavenly Father for help, found respite from Satan … Soul’s ease … in the ministrations of the Angels. And so might we, were we to call upon Him for succour (that is, aid or help).

I have a good image for you. The title is “Jesus Ministered to by Angels.” The artist is James Tissot. The date is 1886 to 1894. It is in Wikimedia Commons, and is in the public domain. You can see Jesus lying on the ground, sleeping peacefully. All around Him, in the air, are angels with little lights of fire above their heads, touching Him with their hands and protecting Him. It looks like this … 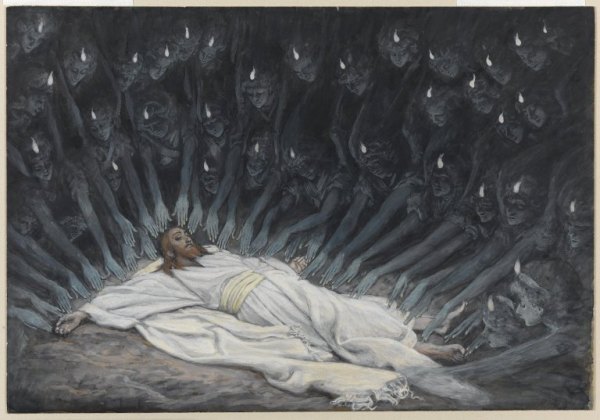 Image: “Jesus Ministered to by Angels,” by James Tissot, between 1886 and 1894, in Wikimedia Commons … https://commons.wikimedia.org/wiki/File:Brooklyn_Museum_-_Jesus_Ministered_to_by_Angels_(J%C3%A9sus_assist%C3%A9_par_les_anges)_-_James_Tissot_-_overall.jpg … public domain

Image: “Jesus Ministered to by Angels,” by James Tissot, between 1886 and 1894, in Wikimedia Commons … https://commons.wikimedia.org/wiki/File:Brooklyn_Museum_-_Jesus_Ministered_to_by_Angels_(J%C3%A9sus_assist%C3%A9_par_les_anges)_-_James_Tissot_-_overall.jpg … public domain

It is a little hard to see the angels. See how peaceful Christ looks, lying down? … as if He had no cares at all … as if they were there to protect Him all the time. Those are their hands touching Him all around.  See the lights above their heads? It is a beautiful painting, is it not? And quite the opposite of the painting of the Garden of Eden, where the being there did not have the best interests of Adam and Eve in mind.

Both Satan and the Angels might be said to be astral beings … although the Angels are often of higher dimensions entirely than is Satan (that is, higher than the astral plane, which is the fourth dimension) … but the intent of Satan is to murder our higher consciousness; and the intent of the Angels is quite the opposite: it is to allow us to know God, to experience God in our own hearts and in our own lives, and in the way that we live our lives, you see? So they are two very different sorts of beings.