Written and published on 27 January 2015

As you most likely know, the heart is the center of the energy flow of the human body. In past, several interesting flow systems have been proposed for the human body.

After the kundalini is awakened … as explained in footnote (1) … then mostly a person feels the coursing of energy upward and downward along the spine.

Then there are the five pranas (also known as the five vital forces or vayus) that course through the body. I know a good deal about the kundalini energy, but very little about these vayus.  I see from the picture below that the typical understanding of the directional flow of prana and apana is quite the opposite of the way I’ve described it in previous blogs.

Erratum. I’ve been characterizing prana as downward coursing energy, and apana as upward coursing energy. It looks like the usual way of describing these two energies is the exact opposite. Apparently, it is prana that courses upward from the heart, and apana that courses downward from the navel point area. Please accept my deepest apologies in this.

For more on the pranas, surf to “Kundalini Awakening” by Swami Jnaneshvara … https://swamij.com/kundalini-awakening-1.htm …  and then scroll down to the section “Prana divides itself into five Vayus”

It seems to me there is some confusions, amongst various proponents, regarding the definition of these terms. I guess the thing to do is to speak to the person whose works are being studied, to find out what these terms mean to him or her, specifically.

WHICH IS MORE IMPORTANT, PRANA OR APANA?

Concentrating on Upward Flow Causes Lack of Grounding. Devotees of yoga who practice a preference for the upward flow will experience lack of grounding, a tendency to float out into the astral realms, and difficulty in maintaining personal relationships.

On Feeling a Solid Tube of Energy. In recent years I have had some difficulty with both these energy systems, the kundalini and the pranic energy, as they contradict my current experience. What I mostly feel now is a solid tube of energy along my spine. And a breathless (no breathing) state when I meditate.

REVERSING THE FLOW OF PRANA AND APANA AWAKENS KUNDALINI

I read today in Swami Jnaneshvara’s website a very interesting description of a yogic technique for reversing the flow of prana and apana so as to cause the kundalini to awaken. To read this, go to Link: “Kundalini Awakening” by Swami Jnaneshvara … https://swamij.com/kundalini-awakening-1.htm … and then scroll down to the section “Reversing Prana and Apana Vayu.”

On that page is mentioned a state of absence of breath awareness, and that is the state in which I experience the solid pranic column energy. And I also experience extension of this energy far out from the human body. Some say, as high as the Central Sun (very high indeed!) and as low as the crystal core of New Earth. And at the least, I feel energy a foot or so beyond my physical body.

On the ‘Pranic Column’ as Opposed to Pranic Energy

The terms ‘pranic column’ and pranic tube’, however, seem to have been generalized from the pranic energy that circulates from the nostrils down to the lungs, and back again, and used in modern day (with some ensuing confusion) to mean the energy that courses up and down the spine, aka the kundalini, central vertical power current, antahkarana, silver cord, or silver thread.

And then the other night, in the middle of the night, I felt an electromagnetic energy field like this torus, but very, very large and wavering:

Image: Human electromagnetic field, including the torus and the kundalini … https://mindbodyscienceworks.com/wp-content/uploads/2016/11/electro-mag-of-heart-300×191.jpg ..

Link: “The Torus, the Zero Point Energy Field = Creation Story – page 17: The Torus and How the Universe Was Created,” by Rita Marr … https://haradimension.blogspot.com/p/the-hara-line-and-torus.html ..

The above-referenced page describes the torus shape of the energy field around the human body, as if we were inside a doughnut of energy. It describes the bidirectional flow of this toric energy as taking place sequentially rather than simultaneously. (I have a feeling this is incorrect … that the perception of tidal flow, first one and then the other, is merely a constriction imposed by the third dimension.) It also explains that wave and particle relationships, as described in quantum physics and string theory, are embedded in this toric flow.

The energy of the human EMF torus is constantly coursing both upward and downward. Here is a video depiction …

Could it be that this constant upward and downward coursing energy is giving rise to the feeling of solid pranic column energy? And might that also account for the fact that I feel the central energy column, the pranic tube, the ‘central vertical power current’, extending far above and below my body? I do not know.

Here is a picture of possible energy states of an electron … 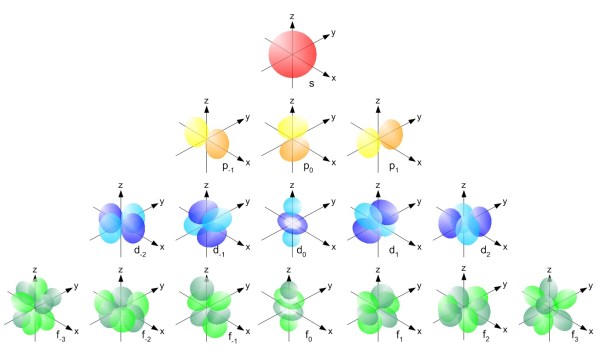 What causes the changes in energy states of the electron? The change occurs when it is hit by a photon … as in, the new Incoming Light….

Both of these remind me of Twin-Souled electromagnetic fields I have experienced. The 2p shapes reminds me of the Contiguous Twin Soul field, and on the right, of the Merged Twin Soul field.

I wish I could come up with a comprehensive theory on this, but I guess now is not the time. I welcome your comments, especially with regard to hands-on, personal experience.