Written and published on 10 October 2013; updated with images, text and videos during October 2021-January 2022; republished as a separate blog on 29 December 2021
Full title: “Satan’s Powers and What to Do about Them: 6. How to Recognize a Person Who Is Possessed by a Negative Astral Being by the Qualities of That Being Mirrored in the Person” … “6.11 Negative Levitation” . by Alice B. Clagett
Biblical references (if there are any) are in light blue font.

This is subsection “6.11 Negative Levitation,” of the section “6. How to Recognize a Person Who Is Possessed by a Negative Astral Being by the Qualities of That Being Mirrored in the Person,” from the video series “Satan’s Powers and What to Do About Them,” by Alice B. Clagett. There is an edited Summary after the video …

I have for you today subsection 6.11 of the video series “Satan’s Powers and What to Do About Them,” by Alice B. Clagett. Subsection 6.11 is entitled “Negative Levitation” …

Levitation can occur, I feel, when a person aligns his or her heart and mind and will with the Great Heart, the Great Mind, and the Great Will of God. In so doing, he or she becomes one with the All … with God’s creation … and can manifest miracles. Jesus, for instance, was able, through God’s grace, to walk on water.

LEVITATION THROUGH ENTITY OBSESSION OR POSSESSION

It also happens that people obsessed or possessed by negative astral beings levitate. In terms of the Negative Alien Agenda (NAA) …

THE PRINCE OF THE POWER OF THE AIR

The Bible mentions that Satan is “the prince of the power of the air” –Ephesians 2:2 (KJV, public domain). I get from this, that the negative astral beings …

I have for you an intriguing image entitled “Witches’ Flight,” by Francisco de Goya, 1797, from Wikimedia Commons, and in the public domain. You can see, at the bottom of the picture, a dark-clothed person (with a white hood and shawl on), bending down toward the ground.  To the left of this dark-clothed person, and lying prone (face downward) on the ground, is a brown-clothed person holding his hands over his ears. That may indicate there is quite a commotion going on.

And above them are several witches (possibly young men rather than young women), levitating in the air, and holding up the supine body of a young man. It is as if he were lying flat in the air, with chest and face turned upward … 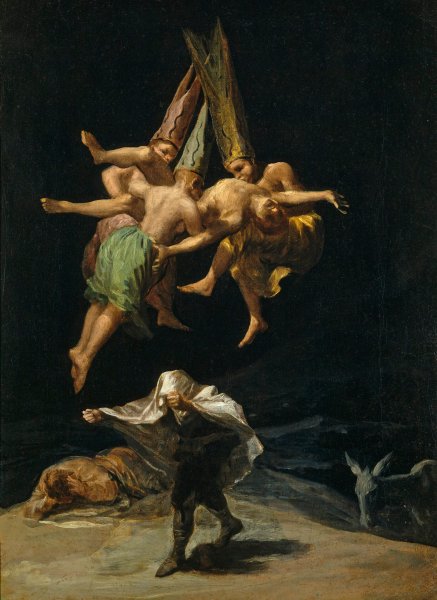 I was intrigued by the 3D effect of this image, and its oddness. You can see also the three long, tapered hats on the witches, and their lack of clothing on the upper portion of their torso. They are wearing green skirts, and floating in the air.

I see also over in the corner of the image, at the righthand bottom, what looks like a burro, or a donkey … and I wonder if that might have to do with the legend that the indigenous cults of Brazil have, to do with the ‘chwal’ or ‘horse’ or ‘donkey’ that a black magic spell can cast upon a person, in order to make that person carry the burden of the Dark and carry out the black magician’s wishes.

If that were true, then this man lying so compliantly, in the arms of the levitating witches, might be that very ‘chwal’ or ‘donkey’ or ‘horse’ for carrying out the conquests of the black magicians … of the witches … of the sorcerers in the world.

And levitation might be the perk that they have offered him in order to puff up his pride. As you can see from the image, it might nevertheless be the black-clothed figure at the bottom center of the image, or the three green-skirted witches in the air that are the ones who are conferring that power on the man … and not he himself.

Taking it one step further, the black-clothed figure standing on the ground, or the three young witches in the air may be the dupes or pawns of someone … or some-thing in… in the fourth dimension (beyond physical form).

This is altogether an unappealing, foreboding sort of image, I feel.

For more on levitation, see my blog category: Levitation

For more on the Brazilian legend of the ‘chwal’, see my blog category: Donkey man – human horse – chwal