ASCENSION THOUGHTS ON THE TEMPTATION
OF CHRIST IN THE DESERT: LUKE 4:1-13

THE HEAVENWORLDS VERSUS CHRISTED AND BUDDHIC CONSCIOUSNESS (THE FIFTH DIMENSION)

Matthew 6:9 … Our Father which art in Heaven…

Pre-Ascension, the heaven worlds of the astral plane were the highest of astral matter to which humankind could aspire. And so, God the Father (corresponding in the Ascension tradition to the Elohim) was thought of as dwelling there.

Now that Earth has risen to the fifth dimension, humankind can ascend through the Veil from the astral realm (4D) to the realm of Christ Consciousness and Buddhic Consciousness (5D). God the Father, or the Elohim, may be thought of as dwelling there … and in all dimensions of this Solar System (1).

ON HONORING THAT WHICH IS DIVINE

Matthew 6:9 (continued) … Hallowed be thy name.

This means: Let us call thy name Holy; and it applies in both a Christian and an Ascension context.

SIGNS IN THE SKY: THE KINGDOM OF GOD AND THE PHYSICAL ALIGNMENT OF OUR GALAXY WITH THE CENTRAL SUN THAT OCCURRED IN DECEMBER 2012

The Kingdom prophesied in the Bible, in an Ascension context, is the higher frequency that returned to Earth in December 2012 when our far-flung Galaxy aligned with the Central Sun. This frequency can be conceived of as physical, but physicality is only one aspect. All creational energies have shifted: the subtle as well as the physical energies. (2) xx

ON ALIGNING WITH GOD’S WILL

When we relate to our physical form (3D) and our astral form (4D), we have the ability to co-create a non-loving reality. This is the stuff of the lower dimensions …

ON RISING BEYOND TIME AND SPACE, TO AWARENESS OF THE NOW

Matthew 6:11 Give us this day our daily bread.

Well, hmmm … ‘daily’ … Could this mean that God has sustained us through the experience of time and space? And that, in an Ascension context, we are now able to step out of that time-and-space experience, and see it as an artificial co-creation with God, a little bubble of anomaly in the flow of the Now?

Or might it simply mean that God sustains us through the lower dimensions, physical and astral, which might otherwise be perceived as perilous, because they are based on the illusion of separation from God?

Matthew 6:12 And forgive us our debts, as we forgive our debtors.

This is a pretty important notion, and to my mind the most important part of the Lord’s Prayer. Here we are, in the 3D-4D ‘veil of sorrow’. Seems like everybody in creation is indebted to us for something, does it not? Or else that it would behoove us to make someone else indebted to us … ‘beat them to the draw’, as it were …

Will we or will we not have the strength of will to forgive everyone? To forgive ourselves? To forgive the 3D world for all its dramas of right and wrong, good and bad, light and dark?

On the topic of forgiveness, Christ said, “But I say unto you, That ye resist not evil: but whosoever shall smite thee on thy right cheek, turn to him the other also.” –Matthew 5:39 (KJV, public domain) … and also …

43 “Ye have heard that it hath been said, Thou shalt love thy neighbour, and hate thine enemy.

44 “But I say unto you, Love your enemies, bless them that curse you, do good to them that hate you, and pray for them which despitefully use you, and persecute you;

45 “That ye may be the children of your Father which is in heaven: for he maketh his sun to rise on the evil and on the good, and sendeth rain on the just and on the unjust.

46 “For if ye love them which love you, what reward have ye? do not even the publicans the same?

47 “And if ye salute your brethren only, what do ye more than others? do not even the publicans so?

48 “Be ye therefore perfect, even as your Father which is in heaven is perfect.”

Until we take this step, we cannot step into Christ Consciousness. For the Fifth Dimension consists of unconditional love, loving kindness, complete forgiveness. There is almost no polarity, no density, there. No judgment, no vengeance, no blame.

Matthew 6:13 And lead us not into temptation, but deliver us from evil … Amen.

Well, this is pretty good advice while we are viewing reality through the 3D-4D mental filters. Lord knows, there is plenty of temptation, in the way of Soul wounding and samskaric distortions of our etheric bodies, and also, in the way of peril to our physical selves, to be cleared up.

And who, through the example of his life on Earth, is better suited than Christ to set us on the path to Soul clearing? To help us avoid further karmic entanglement?

ASCENSION THOUGHTS ON THE TEMPTATION
OF CHRIST IN THE DESERT: LUKE 4:1-13

I love the story about how Christ went out to the desert and was tempted by Satan. Here is Luke 4:1-13 (KJV, public domain) …

1 “And Jesus being full of the Holy Ghost returned from Jordan, and was led by the Spirit into the wilderness,

2 “Being forty days tempted of the devil. And in those days he did eat nothing: and when they were ended, he afterward hungered.

3 “And the devil said unto him, If thou be the Son of God, command this stone that it be made bread.

4 “And Jesus answered him, saying, It is written, That man shall not live by bread alone, but by every word of God.

5 “And the devil, taking him up into an high mountain, shewed unto him all the kingdoms of the world in a moment of time.

6 “And the devil said unto him, All this power will I give thee, and the glory of them: for that is delivered unto me; and to whomsoever I will I give it.

7 “If thou therefore wilt worship me, all shall be thine.

8 “And Jesus answered and said unto him, Get thee behind me, Satan: for it is written, Thou shalt worship the Lord thy God, and him only shalt thou serve.

9 “And he brought him to Jerusalem, and set him on a pinnacle of the temple, and said unto him, If thou be the Son of God, cast thyself down from hence:

10 “For it is written, He shall give his angels charge over thee, to keep thee:

11 “And in their hands they shall bear thee up, lest at any time thou dash thy foot against a stone.

12 “And Jesus answering said unto him, It is said, Thou shalt not tempt the Lord thy God.

13 “And when the devil had ended all the temptation, he departed from him for a season.”

To me these verses point out some of the kinds of temptation I might want to be on guard against:

Do not show off with superpowers so as to gain worldly power. It is not through worldly power that the spark of life glows in your physical body. It is God’s grace that sustains you from moment to moment, and from God that all abundance flows.

In verses 5-8, the Devil pointed out to Christ just how lucky he might get in the way of worldly power if he would align with the Dark rather than the light of God. Christ just said ‘no’.

ON ALIGNING WITH GOD AND GOD ALONE

Now this may seem patently obvious … just say ‘no’ to Satan. But the karmic play is sometimes arranged in such a way as to make this a pretty difficult choice.

Christ, for example, was being persecuted by the high priests of Judaism … by the authority figures of his own faith. His very life stood in the balance. Satan was offering him authority over those in authority who were persecuting him; yet he chose to align with God.

In our own lives, the choices may be less dramatic, but still very compelling. What if, for example, the hologram were to confront me with this choice …

I have devoted my life, my every waking breath, to the faith and the church of which I am a ecclesiastic, a member of the clergy.  I am faced with the prospect of my church losing its physical facilities due to financial difficulties.

Consequently my church might lose the respect of its followers, not to mention their financial support. And so my own livelihood, my housing, my daily sustenance, and my cherished role as a spiritual leader are jeopardized. As is my church and my faith, whose main spiritual mission is to pray for Peace on planet Earth.

ON DECLINING TO JOIN SATAN’S WAR EFFORT AGAINST OTHER RELIGIONS

Then Satan might say: That is, unless you do one small thing for me: Use your spiritual powers to aid the war effort on Earth … perhaps in a campaign to gain converts from another faith, for instance? Just this once … It’s a small war, after all. Hardly a war at all … What harm is there in this tiny digression? Think of all the good you’re doing!

He is a crafty guy, is Satan. Not so? What is to be said to a thing like that? How hard can it be to let the Kingdom of Earth dissolve at my feet? Pretty hard, actually … And what will happen if I do?

IMAGES OF CHRIST THROWING SATAN OFF A MOUNTAIN 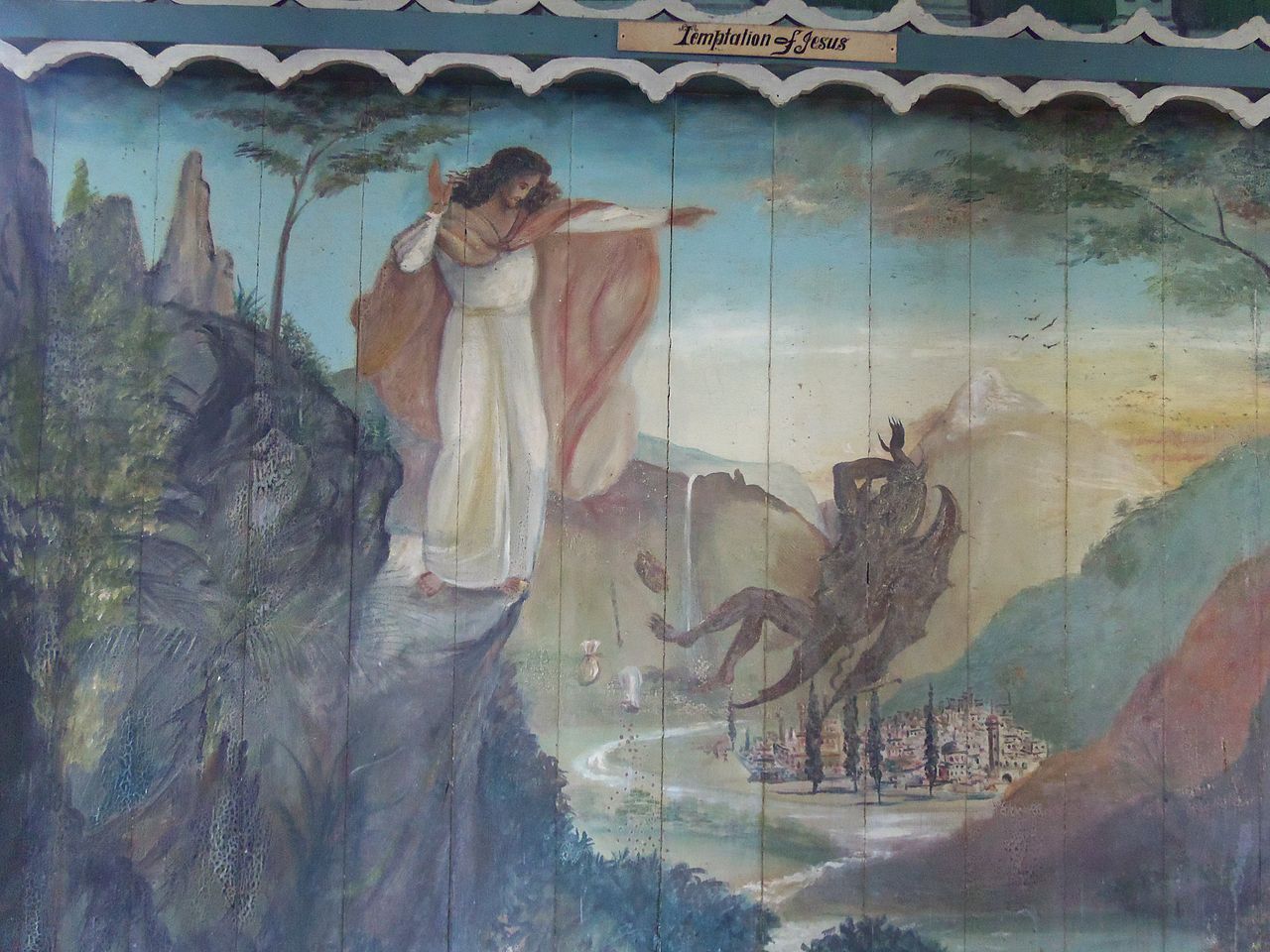 (1)  For more on the New Age concept of the Elohim, or Creator Gods of this Solar System, see …

(2) Here is Cosmic Awareness, speaking, before the fact, about what in fact did transpire in December 2012, the time of the Shift … the moment of Ascension …

Link: “2012 and the Ascension,” from Cosmic Awareness Channeled Readings given in 2008/2009, from “CosmicAwarenessCommunications” … http://www.bibliotecapleyades.net/ascension/esp_ascension_37.htm ..