ANTISOCIAL PERSONALITIES AS PEOPLE WHO ARE ‘ABOVE THE LAW’

There is a notion in the astral chatter that we must allow antisocial personalities to do the Team Dark ‘smash and grab’ thing (aka the ‘Dark Attack’) in order to save ourselves from hostile out-group peoples. Sometimes the story goes that the antisocial personalities are working for the security of our nation, and that the threat comes from abroad … from other nations. That we must allow these fake ‘government agents’ to kill and rape and maim and plunder in our home towns because the highest levels of government have authorized them to do so.

I am here to say: No way! This story is just a Hollywood movie line created by antisocial personalities to trick us into overlooking the mayhem they are wreaking on our towns and cities, all over Earth.

I have a few thoughts regarding why this unlikely astral story even exists. The first is a clue I got from Wikipedia, some while back, about antisocial personalities. It said that they frequently ideate a grand role for themselves, such as that of a prophet, or king, or Secret Service agent, or a being from outer space with incredible psychic abilities.

Back in the day, and without much fanfare, these used to be termed ‘delusions of grandeur.’ So there is that.

In addition, I have my own theory, as follows: Antisocial personalities, I feel, have massive Soul wounding … the bruising and dark mottling from misadventures in this and prior lifetimes must cover much of their body of Light. It will also be reflected in all their other subtle bodies, and often results in illness or congenital malformations in the physical body.

Now Soul wounding consists of inclusions of anomalous darkness within our body of Light. These inclusions are held in place by bands or strictures or bubbles of deeply unconscious astral matter. One might think of these ‘restraint devices’ or ‘containment pods’ as ‘antimatter’ … although that is only a word connoting their great deviation from the normal composition of astral matter, which tends toward and yearns for sentience, by its nature.

ARE THESE CONTAINMENT PODS TENDED BY  NATURE SPIRITS UNABLE TO CONTACT THEIR DEVAS?

These ‘containment pods’ in which are stored Soul wounding experiences may be tended by astral ‘imps’ or nature spirits who have been bewitched by the Dark into this dark activity, either through threat to their own selves, or through misinformation by the Dark about the nature of the service they are doing. For instance, they may be convinced by the Dark that they are doing a good thing. It happens that nature spirits fall under the sway of the Dark especially in urban areas, where their Deva guardians cannot enter to instruct and save them from bewitchment.

I feel that the nature of the containment pods … their composition being deep unconscious astral matter … is the true cause of the much vaunted ‘mind control’ abilities of the Dark; I will develop this notion below …

I will give an example. Some long while ago, I was in a very nice church; there were clairly gifted people in it, who could see on the astral plane, and who were familiar with astral beings, both those of the Dark … such as demons and devils and imps … and those of the Light, such as beings of Light, star brethren, ascended masters, and angels.

During the service, I was listening to the sermon. All of a sudden, I passed to a subconscious state; then I heard a commanding astral voice coming, apparently from a man near the front of the church …

I suddenly awoke to full consciousness, as it seemed an evil being bounded off of the left side of me and over to a person sitting about six feet from me, to my left. Then I remembered the same thing had happened the previous week. Then I astrally requested a ‘rollback’ (a timeline loop) …

And as is usually the case, I got an instant replay. Just before my sudden lapse into a subconscious, dreamlike state, an astral figure about four feet high had sprung out of the gentleman seated to my left, and lept onto me savagely. I call it the ‘Iwo Jima’ thing, because the leap reminded me of The Marine Corps War Memorial in Arlington, Virginia … 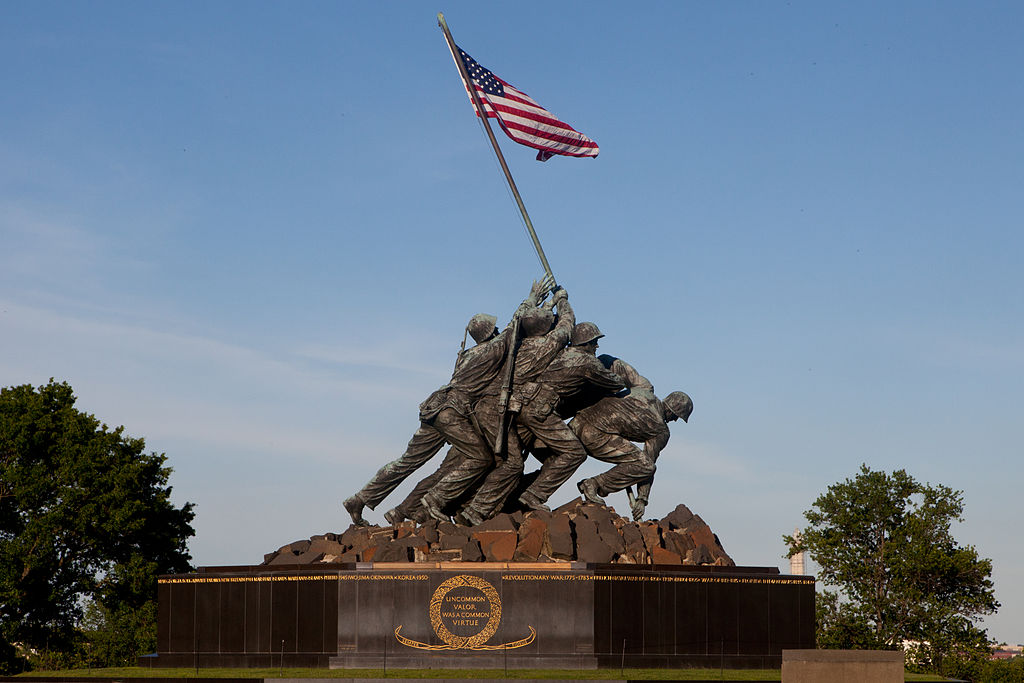 Image: “The Marine Corps War Memorial in Arlington, Va., can be seen prior to the Sunset Parade June 4, 2013. Sunset Parades are held every Tuesday during the summer months,” author Adrian R. Rowan, Public domain photograph from defenseimagery.mil, http://www.dimoc.mil/ ..

Image: “The Marine Corps War Memorial in Arlington, Va., can be seen prior to the Sunset Parade June 4, 2013. Sunset Parades are held every Tuesday during the summer months,” author Adrian R. Rowan, Public domain photograph from defenseimagery.mil, http://www.dimoc.mil/ ..

The astral action that took place was a leap out of the person sitting 6 feet to my left, through the air, and then a springing down on me … as if the statue were a time lapse of the astral event.

However, the statue represents an action of patriotic heroism, and the flavor of the astral event was one of utmost cruel intent. I discussed this on the astral plane with the gentleman who had spotted the attack, the one who called out astrally: Be gone, Satan!

Here are two images that offer the emotional tenor of the event, but not the time-lapse effect …

Image: “Pilgrim’s Progress: Escape,” by DouglasRamsey on DeviantArt … https://s-media-cache-ak0.pinimg.com/originals/2b/17/cd/2b17cd75de9cb6d679e56e7241a173c0.jpg ... This is an image of a young man with a big burden on his back, getting up from a kneeling position just as a giant gnarly demon is leaping on him from the sky. Very nice artistic rendition; but in the event described above, it was me, a woman seated, and the ‘demon’ was not half so large … although this artists captures very well the emotional feeling.

Image: “Christian Fights Apollyon: Illustration No. 309 to ‘The Pilgrim’s Progress’,” by  William Strang, 1894 …  https://www.nationalgalleries.org/sites/default/files/styles/postcard/public/externals/118983.jpg?itok=xAi-Dt2r … This is a drawing of a pilgrim with a devil perched on his left shoulder. The pilgrim looks wide awake though, and is reaching for his sword. He has also a shield over his head, between him and the devil.

To me, it seemed that what had happened was not the attack of a Dark entity, but rather the sudden release of the containment pod of a Soul wounding incident that had been suffered by the man to my left. Clearly this act of violence, perhaps inflicted by the gentleman himself in wartime, or perhaps viewed by him, had been repressed beneath a layer of unconscious energy, for that would account for my sudden passing into a subconscious state.

As the Soul wounding experience was released from the man’s aura or energy field, I was first hit by the unconscious energies in the containment field, and then the stored audiovisual file, the memory of the event held in the Soul field of the man, sprang forth as well.

While this appeared to the man in the front of the church as an attack of the Dark, in actuality, I feel it was the beginning of a Soul healing event for the man to my left. I feel he is now in the process of allowing this traumatic experience to surface into his conscious Awareness, and thus resolving and healing the memory of the incident. That cathartic release may happen for him one day soon, if it has not already done so.

I have often paused to wonder: If antisocial personalities represent 1 to 4 percent of the population, and if by definition they commit acts of atrocity all the time, then why is it that they are so seldom apprehended by law enforcement? And when apprehended, is it true that they are able (as is oft stated in the astral airs) to obfuscate the psychologists and psychiatrists that interview them, elude their captors, and escape from imprisonment?

Do antisocial personalities in fact have awesome powers of mind control?

This Iwo Jima incident that I experienced some while ago makes clear the mechanism of mind control of antisocial personalities such as killing cult leader Charles Manson, killing commune leader Daniel Perez (aka Lou Castro), and the cannibalistic literary figure Hannibal Lecter of the movie “Silence of the Lambs.”

What apparently happens in their presence is a leaping forth of the unconscious astral matter of their Soul wounding containment fields. It must be that this ‘springing forth’ puts their captors and interrogators into a kind of daydream state, a state of subconsciousness, as it did me.

ON HEALING THE ANTISOCIAL PERSONALITY

However, a truer way of looking at the event is to see the massiveness of the Soul wounding of antisocial personalities. It is this Soul wounding leaping forth, asking to reach the Light of Awareness and to be healed, that is causing the lapses of consciousness of the people with whom antisocial personalities come in contact. It would also account for the failure of our communities to apprehend them and allot them such placement as will prevent further injury to the social fabric of our communities.

How can we apprehend the antisocial personality? How can he be healed? We must ask our Ascension teams for new Ascension skills … armor, as it were … to withstand sudden onslaught of unconscious astral matter, so that we may remain wide awake when hit with their Soul wounding containment fields. When we are able at this skill, then we will be able to clair hold the audiovisual clips of their Soul wounding up to conscious Light, so that it may be transformed, by their own Souls, to Light and love.

This is good news: Whereas in past there has been no hope for rehabilitation of the antisocial personality into the mainstream, now there is a direction, a potential treatment, and hope of healing.

It occurs to me also that all forms of injurious addiction … whether to alcohol, or to drugs, or to obsessive compulsive behaviors … may indicate a similar unconscious containment field mechanism. Perhaps the addict has had Soul wounding experiences, in this or a prior lifetime.

During the course of the day, an emotion surfaces in the emotional body that begins to bring up the memory of the Soul wounding. The habitual act represented by the addiction is under control of the unconscious mind, and by instinct the person reaches for that act, which brings down a container of unconscious energy that represses the Soul wounding memory back into a dark, dense occlusion in the body of Light.

If this be true, then treatment might be attempted in a manner similar to that described above for the antisocial personality.