Filmed and published on 11 January 2015; revised

Here is a prayer to the Cherubim and Seraphim, and the great beings that help with the Cosmos. We so seldom think of them, is it not so? And yet, they protect and nourish all Creation. The beautiful instrumental music in the Postlude is “Prelude No. 16” from the album “Preludes” by Chris Zabriskie, CC BY 4.0. A Summary follows the video …

I have a prayer for you. I hope you like it. It is very short, and it goes like this …

Cherubim and Seraphim: A Prayer
Channeled by Alice B. Clagett
11 January 2015

May the Cherubim and Seraphim,
The Powers and Potentates,
The Thrones, the Virtues, the Dominions,
And all the Archangels
Protect my Soul
Restore my Heart to its state of pristine Joy,
Through Christ Jesus, my Lord,
Amen

[Featuring “Prelude No. 16” from the album “Preludes” by Chris Zabriskie, CC BY 4.0. Photos by Alice of garden flowers and wildflowers. I have not published the photos separately as they looked a little out of focus to me.]

Link: “Devas,” from … http://www.soul-guidance.com/houseofthesun/ET/devas.htm … see the section “Classification of the Angels” ..

Remember how, when Rome conquered Britain, Ireland and the like, understanding of the Devic Evolutionary Line …. Devas, Nature Spirits, Elementals, and so on …

… was suppressed in the name of Christianity? Existing these days only in foreign climes, and in the teachings of Wicca …

Yet in the Bible there is mention of the Cherubim and Seraphim, the Powers and Potentates, Thrones and Dominions, the Virtues and Principalities, the Archangels and the Angels …

Certain of the archangels are the highest order of beings in the Devic Kingdom; these are termed ‘devas’ or ‘devi’. Today I was reading about this in “Lesson 13. The Devic Kingdom: Kingdom of the Angels” ,,,

LInk: “The Devic Kingdom: Kingdom of the Angels,” a theosophical treatise … http://www.estudiandoteosofia.net/EN/Written/LESSON13.pdf ..

THE BIBLE: ANGELS VERSUS BEINGS OF LIGHT (ETs)

In our understanding of the Bible, there is a ‘glom’ regarding angels and messengers from God (described as men surrounded by Light). Actually, these are different sorts of beings. Angels are beings that include the Devic Evolutionary Line. Beings of Light who look like men are Star Brethren, such as the Hathors of Sirius and Venus, the Arcturians, and the Pleiadians. These are apparently our brothers and sisters of the stars … those who, when our hearts are tinged with fear, are known at ‘ETs’. But when our hearts are fully lit, they are known as our Star Brethren …

Image: Siriun being of Light giving Light to a human being … https://www.hybridchildrencommunity.com/wp-content/uploads/2014/01/sirian-being-giving-light-to-human-being.jpg … COMMENT: I take exception to the form of the being of Light in this painting; the depicted form may have been ‘a little distorted by ingestion of magic mushrooms. I am certain, though, that the transfer of pure heart energy to a human being is one of the missions of the beings of Light that are called to help humankind.

Image: Being of Light by Joska Soos, 1988 … http://www.soul-guidance.com/houseofthesun/media/jsimages/cosmic05.jpg ..

Here is what to do if an antisocial personality is just will not take No! for an answer on the astral plane. Either out loud, or telepathically, say …

May you be blessed with unconditional love!

This works for many types of beings …

The reason it works, in negative instances, is that you are asking God to bless them with unconditional love. The Universe is made of Love. God is love. So to ask God to bless these beings with what He and all creation is, is a prayer for a great blessing for them.

However, unconditional love is far from being the perfect cup of tea for a negative being. In fact, quite the contrary. So when we ask God to bless them with unconditional love, they will flee away from our astral form, with a feeling of great aversion.

… why then God’s blessing shines down upon them, uplifting the All through free will.

Here is a cloud reading about the cherubim and seraphim, the plane of forces, and the archangel warriors for the good. Other topics are …

I was rewriting a blog on the cherubim and seraphim today, and for some reason I am reminded of that by this beautiful cloud. It strikes me it is like the plane of forces that helps to create this realty of third and fourth dimensions. Absolutely incredible energy here: Look, it almost looks like a sprite dancing, or an Archangel triumphing over evil … 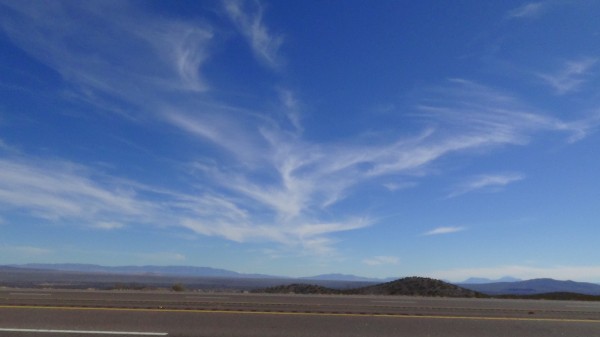 As to that cloud that looks like the cherubim and the seraphim, the powers and potentates, the virtues, the dominions, the thrones, the archangels, it seems to me that it looks like all of those wonderful creative forces that work with God to create this cosmos through the plane of forces.

Along those lines, I would like to mention that some people feel the way to get ahead, the way to grasp power in the world, is to use black magic or sorcery, or to work with the Demon Realm, and somehow escape unscathed with your own ‘power pack’ … [laughs] … of demon power, and get out of that before the demons grab you and carry you down to the hellworlds, which are the negative astral planes of Earth … the Earth field negative.

But the power of the demon world has to do with human personality and ego when it is not aligned with God. That is why Djwhal Khul’s Great Invocation has such power in the world today.

Djwhal Khul’s prayer is about aligning our own petty minds and hearts and wills with the majestic Mind and Heart and Will of God. We can set our intention to align with the Creator’s Will.

The Creator is in charge of everything. All the demon world does is it just takes one aspect of Lord Shiva … the destructive aspect … and applies that to the human Soul. If we follow the demon world, what happens is our Soul devolves instead of evolving.

We have a choice to make: We can choose what small power we can borrow from the demon realm to conquer the personalities and egos of other human beings who are our fellow Soul travelers on Earth, and in so doing consign ourselves to the hellworlds after passing on.

Or else we can choose to align with God, and we can choose to call forth the power of the cherubim and seraphim, the angels and archangels, all of those; to call forth that, through the plane of forces of this Creation, especially of this Solar System here. And that will subdue every malevolent force on Earth. Every ego will be transformed by that power to the grace of the Divine. Every situation will be changed. Every timeline in which an ego or a personality of a human being allows, through free will, for this to happen, will be optimized by this.

We have these choices; if we want power in the world today … true power … we must align with the Mind and Heart and Will of God.

I am explaining because I feel that people get into the Shiva thing, and they forget that Lord Shiva is really about the dissolution of the illusion of Maya so that the very next creation of Maya can spring forth.

Lord Shiva is not about the urge to kill; no. Lord Shiva is about breaking down illusion, becoming more aware, becoming enlightened. That is what Lord Shiva really is: To let go all the filters of the mental mind, and to embrace the grace of God, the synchronous reality, the noncausal reality; to take up our true power as human Souls.

Published on 11 January 2015; revised
Previously entitled: Cherubim and Seraphim: A Prayer,” and then “Cherubim, Seraphim, and the Plane of Forces: A Prayer

Here is a prayer to the Cherubim and Seraphim, and the great beings that help with the the plane of forces through which the Cosmos manifests. We so seldom think of them, is it not so? And yet, they protect and nourish all Creation.

I have a prayer for you. I hope you like it. It is very short, and it goes like this …

May the Cherubim and Seraphim,
The Powers and Potentates,
The Thrones, the Virtues, the Dominions,
And all the Angels and Archangels
Protect my Soul;
Restore my Heart to its state of pristine joy;
Through Christ Jesus, my Lord.
Amen.

The beautiful instrumental music in the video is “Prelude No. 16” from the album “Preludes” by Chris Zabriskie, CC BY 4.0 … https://creativecommons.org/licenses/by/4.0/  ..

MORE ON THE ANGELIC REALM

There is a beautiful painting of the Seraphim, by Joska Soos, here …

I like Joska Soos’ artwork because it conveys the notion of the Seraphim as force rather than form. More of his amazing paintings are here …

Dirk Gillabel’s Descriptions of the Different Kinds of Angels

For descriptions of the different kinds of angels … the Seraphim, the Cherubim, the Thrones, the Dominions, the Powers, the Virtues, the Principalities, the Archangels, and the Angels, see Dirk Gillabel’s wonderful website:

Link: “The House of the Sun,”  by Dirk Gillabel, http://www.soul-guidance.com/houseofthesun/devas.htm ..

I have only a few comments to add …

Potentates. I feel that the Potentates are those that control the Dark Forces.

Angels. It is noted in the above link that the Angels have been protecting God’s holiness from man after the Fall. In my world view, the Fall mentioned in the Bible is but one of the Great Ages of Darkness through which our far-flung Solar System provides the much sought-after duality training for those Souls seeking the path of accelerated Soul evolution.

It is noted in the link above that the Angels ‘guard the threshold’. They convey our prayers to God, and they bring us His answers. From this I gather that they tread the paths of Light between the Stars, and from our Solar System wend their way to the multidimensional planes of the Central Sun; thence back again to us.