Filmed on 11 April 2015, published on 30 November 2016
Subconscious metaphor [visual]: The cross and the circle

A video on avoiding deals with the devil, a story about how my baptismal sylph opened my heart chakra, and thoughts on the angle, cross, the circle and the vortex. There is an edited Summary after the video …

I have three unrelated facts for you just now. Let’s see if I can remember them.

How to Avoid or Cancel Deals with the Devil

On Getting into Demonic Contracts by Mistake. The first one has to do with devils and demons and stuff like that. And what I have to say is this:

If you happen to find yourself in the questionable position of speaking with them, always know that no matter how reasonable their suggestion sounds, it is very important not to agree …because, through a work-around of the logical mind, they assume that, if you agree with them on any reasonable suggestion, then you have ‘bought into’ their realm.

The Solution. If, by chance, you do buy in … say, in a moment of sleepiness … then the only thing you have to do is to say …

Spirit to Team!
I cancel, annul, and tear up all contracts!
For the All, through Free Will!

Just do that whenever there is a little slip-up in that regard, and that will keep you free and clear of all those tricky word plays that they use to attempt to influence the human race. That is the first suggestion.

On Avoiding Being Mind-Controlled by the Demon Realm. The second thing has to do with the way that they manage to create images and sounds in our minds … in other words, their way of logging onto our natural, God-given telepathic processes.

… I have discussed how they have a technology for glomming together the tiny, axiatonal lines of the etheric net (which is one of our subtle bodies).

This thing that they do, interfering with telepathy, and logging onto telepathy, is like that.

They create in the etheric net a short circuit (as is often the case). They change the arc of energy there so that, inside of the mind, inside of the brain there is one spot … [points to left side of temple, above eye] … and on the other side (up a little, I think) … [points a little higher up, on the right side of the temple] … there is another spot … and they manage to arc the energy forward towards the front of the forehead … [points to a spot between the eyebrows] … where many people mistakenly think the third-eye point is.

And that is how they create the illusion that they are speaking with us, and that we are being mind controlled. It creates the illusion of object-based reality that is so opposite the law of love.

Enough biology! The point here is: When you use your telepathy, make the point of your Awareness the very center of your mind. Do not push it forward, into the telepathic realm that carries us into the notion of being mind controlled. That is a mental filter, and an illusion, that we can project energy out of our minds … [moves finger forward from middle of forehead, towards the viewer] … and into the third-eye point of another person, and penetrate into their minds. These are nothing but illusions.

The power of the third-eye point, and the mastery of self … the mastery of the mind has to do with this point deep inside the brain. So feel the very center of your mind. Place your Awareness there. And that way you will be beyond Satan’s grasp … beyond the grasp of the demon world. They cannot play with you, with regard to false sensory identification. They cannot create that object-based reality that is so untrue, so opposite the law of love.

A Story About the Sylph I got at Baptism

That was point number 2. And now I have a story for you that I told, in part, before. And this has to do with a friend of mine in the realm of the nature spirits. It is a sylph that I know! And long ago it manifested as a fiery white cross on my back.

These sylphs, they say, are paired with human beings that are baptized in Jesus Christ. I have no doubt but what there are other sylphs that specialize in other religious paths, and other spiritual paths.

But when I was born … shortly thereafter … my parents took me for baptism in a Christian church. And at that moment … as I read later … my sylph and I became one. It became my partner in spirituality throughout my life.

I had forgotten about that! And then one day … I do not know why! … I was listening to the most beautiful religious music in a spirit-filled Christian church, and suddenly my sylph manifested as a brilliant, white, fiery cross on my back, in the place where the back funnel of the heart chakra is … 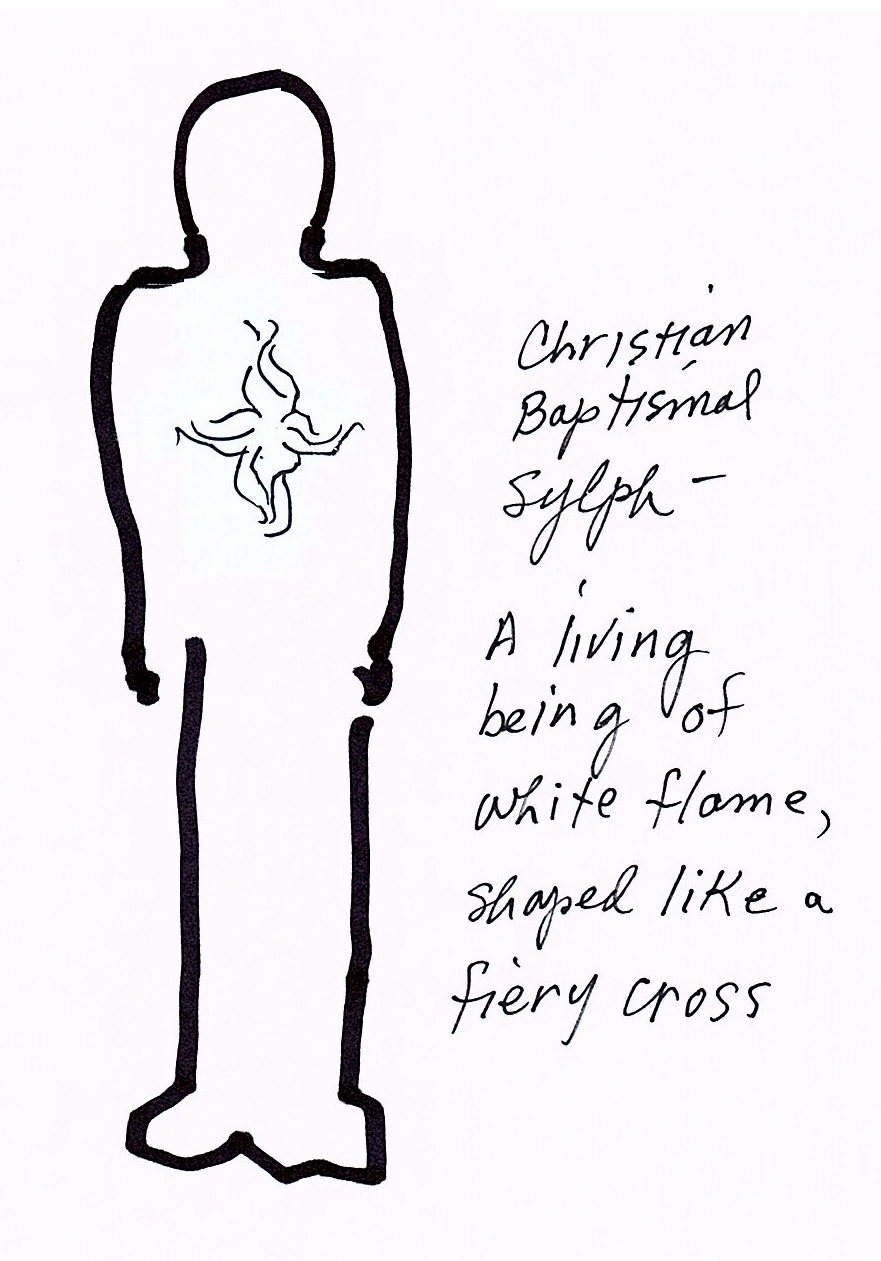 Image: “Christian Baptismal Sylph — A living being of white flame, shaped like a fiery cross,” by Alice B. Clagett, 15 August 2013, CC BY-SA 4.0, from “Awakening with Planet Earth,” https://awakeningwithplanetearth.com … DESCRIPTION: There is the silhouette of a man, facing forward. In the area of his heart is a fiery cross.

Image: “Christian Baptismal Sylph — A living being of white flame, shaped like a fiery cross,” by Alice B. Clagett, 15 August 2013, CC BY-SA 4.0, from “Awakening with Planet Earth,” https://awakeningwithplanetearth.com …

DESCRIPTION: There is the silhouette of a man, facing forward. In the area of his heart is a fiery cross.

It is a beneficial partnership for both, because the sylph itself, while helping the human to perfect his or her energy of the heart, also perfects its own spiritual path. And such a sylph becomes transformed to a seraph, one of the highest orders of angels; it joins the seraphim.

There is that story.

On Thoth and the Emerald Tablets: The Angle, the Cross, the Circle, and the Vortex

I got to thinking today about this question that Thoth brings up, in “The Emerald Tablets” …

… about these symbols: the angle, the cross, the circle and the vortex ... a question also discussed here …

It is a very deep metaphor, that of the cross and the circle, and I got to thinking about this question. Another meaning of that symbolism is that the sylph … the fiery cross … perfects the circle of the heart. Is that not cool? Very cool!

In a deep subconscious context, the cross bars a predator such as a snake from entering the underground home of a small mammal such as a pack rat. In the early human context, the cross might represent a barrier at the mouth of a human clan’s cave; the barrier, perhaps of logs in the form of a cross, might prevent a cave bear or sabre tooth tiger from

In another context … in the context of the geography of the mind in the world, the angles in the cross represent logical or left-brain thought, and the circles represent right-brain thought, and vortical motion represents the movement of the blood through the body and the escape of the human from this trap of this world of time and space, from the world of Duality.

So the sylph; the training of the left brain, and the understanding of its limitations; and the love of the natural world for our own hearts … those things all come together to transform us to the highest that we really are. 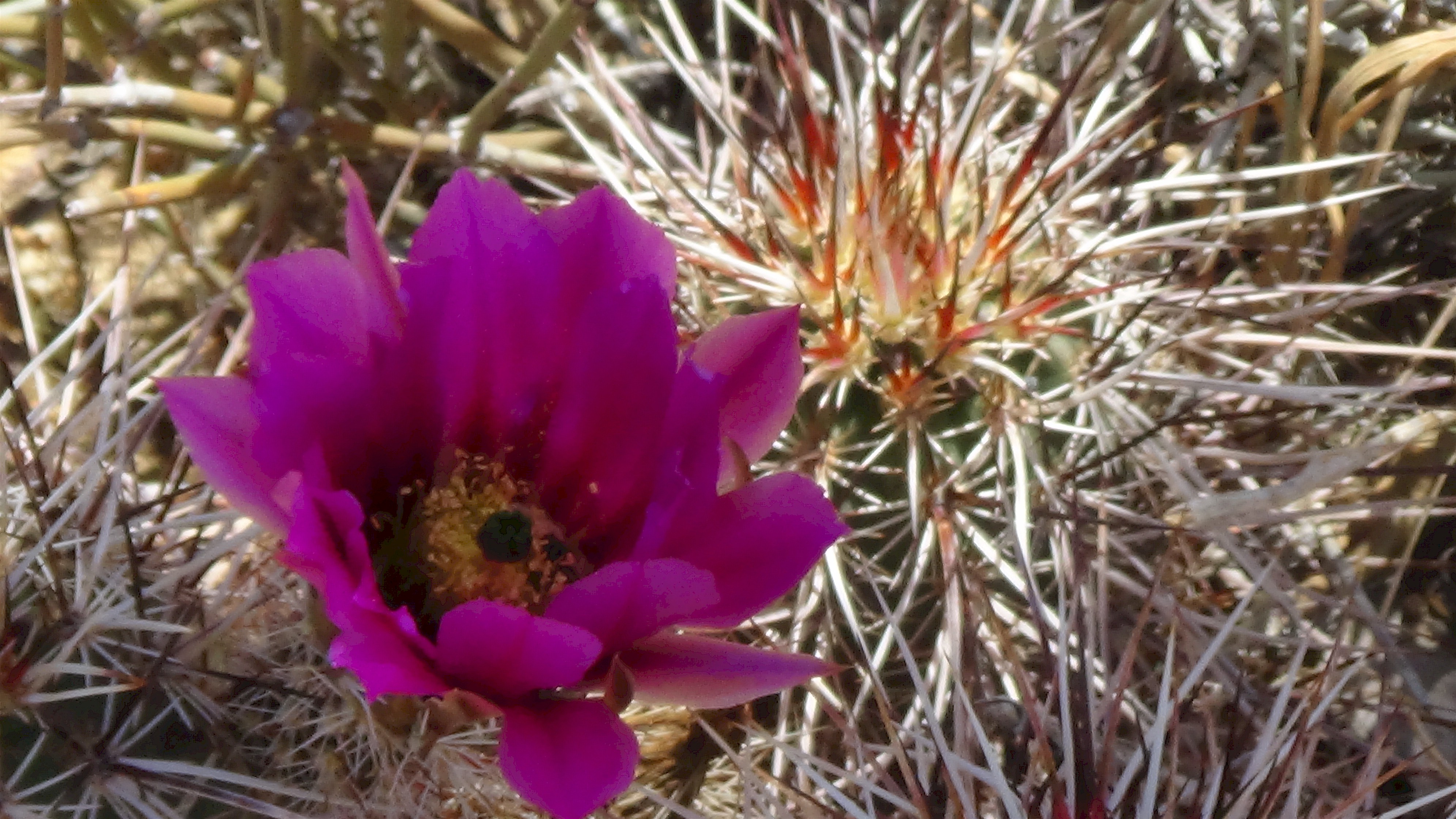 For more on sylphs and the rite of Baptism, see Link: “The Science of the Sacraments,” by C.W. Leadbeater … http://www.anandgholap.net/Science_Of_Sacraments-CWL.htm ..