Written and published on 23 September 2018 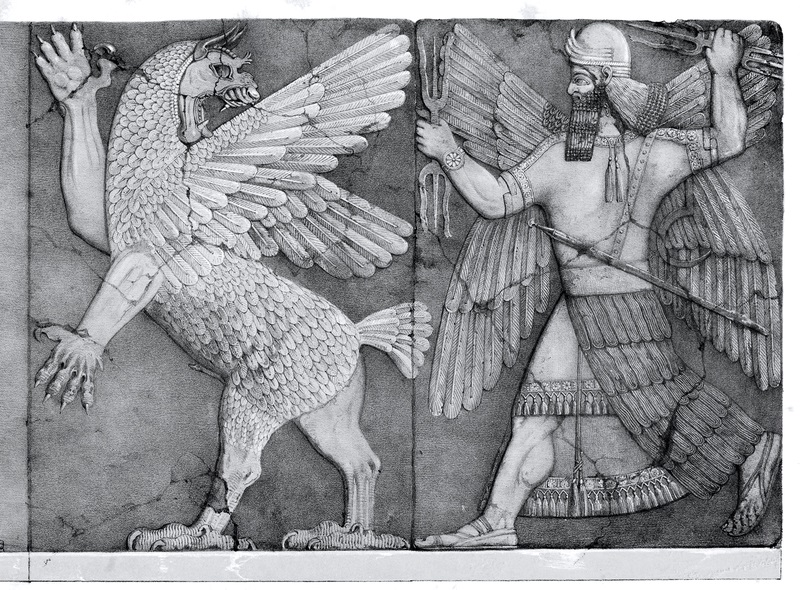 EXHORTATION AGAINST THE DEMON REALM
ON BEHALF OF PLANET EARTH ASCENDING
by Alice B. Clagett
23 September 2018

If it be God’s will
In His name I pray:

May the Demon Realm
Be gone from Earth forever!

(1) Full description of this image: Image: “Chaos Monster and Sun God,” “Black and white crop of full engraving plate scan – from Plate 5 of the work ‘A second series of the monuments of Nineveh: including bas-reliefs from the Palace of Sennacherib and bronzes from the ruins of Nimroud ; from drawings made on the spot, during a second expedition to Assyria’ (WH Layard)

“The description given in the text of the work of the plate reads : PLATE V BAS-RELIEFS AT AN ENTRANCE TO A SMALL TEMPLE (NIMROUD) Part of one side of the entrance near which stood the bas-relief of the King last described. The group is believed to represent the god to whom the temple was dedicated, driving out the evil spirit.† On the opposite side of the doorway the same figures were repeated. These bas-reliefs are now in the British Museum [..] † Ibid. p.348 The plate description is on page 2 of the work. The image in the book is by Faucher-Gudin , an drawing based on the excavated Bas-Relief. The Bas-Relief was in not as good condition. Sources for the description an full plate include … http://digi.ub.uni-heidelberg.de/diglit/layard1853/0010/image http://www.etana.org/sites/default/files/coretexts/17171.pdf (no text) The reference in the text to ‘Ibid. p.348’ is to Discoveries in the ruins of Nineveh and Babylon (Layard, 1853) – which can be seen here … https://archive.org/stream/discoveriesinru00layagoog#page/n398/mode/2up quote (p.348-349) …

“About thirty feet to the right, or north, of the lion gateway was a second entrance, at each side of which were two singular figures. One was that of a monster, whose head, of fanciful and hideous form, had long pointed ears and extended jaws, armed with huge teeth. Its body was covered with feathers, its fore-feet were those of a lion, its hind legs ended in the talons of an eagle, and it had spreading wings and the tail of a bird.

“Behind this strange image was a winged man, whose dress consisted of an upper garment with a skirt of skin or fur, an under robe fringed with tassels, and the sacred horned hat. A long sword was suspended from his shoulders by an embossed belt; sandals, armlets, and bracelets, completed his attire. He grasped in each hand an object in the form of a double trident, resembling the thunderbolt of the Greek Jove, which he was in the attitude of hurling against the monster, who turned furiously towards him.

“This group appears to represent the bad spirit driven out by a good deity; a fit subject for the entrance to a temple, dedicated to the god of war. The singular combination of forms by which the Assyrian sculptor portrayed the evil principle, so prominent an element in the Chaldæan, and afterwards in the Magian, religions system, cannot fail to strike the reader.

“There is also in the same work and illustration of the relief in situ in the temple (between p.350 and 351) Interpretation There are at least two interpretations of what the image is/was intended to represent. Some sources interpret the image as [Bel-Merodach] Marduk (with thunderbolt) fighting Tiamat eg History of Egypt, Chaldea, Syria, Babylonia, and Assyria Vol. 3 (Maspero, G.; Sayce, A. H.) … https://archive.org/stream/egypt03maspuoft#page/n28/mode/1up ..

“Some modern sources state this is probably Anzu and Ninurta. eg in Gods, Demons and Symbols of Ancient Mesopotamia: An Illustrated Dictionary? (Jeremy A. Black and Anthony Green ISBN: 978-0-292-70794-8) p.142 states as text to same image : ‘Ninurta or Adad pursues a leonine bird-monster, perhaps the Anzû or Asakku.’

“A discussion of the development of the interpretation of this image can be found here http://oracc.museum.upenn.edu/nimrud/livesofobjects/anzu/index.html archived link Original Source The original gypsum wall carving from which the drawing was taken is now (2018) displayed in Room 6 of the British Museum. Details of the object can be found here: British Museum reference BM 124571 … http://www.britishmuseum.org/research/collection_online/collection_object_details.aspx?objectId=367087&partId=1&searchText=relief&people=117843&page=1 http://www.britishmuseum.org/research/collection_online/collection_object_details.aspx?objectId=367087&partId=1&searchText=relief&people=117843&page=2 ..

“The actual object also has a cuneiform inscription across the (approx.) middle third, not reproduced in the drawing. The texts is thought to be a ‘boilerplate’ text used throughout the palace/temple on several reliefs – for more details and translation of a presumed nearly identical text see Assyrian Rulers of the Early First Millennium BC, I (1114-859 BC) vol. 1, (Grayson, Albert Kirk,Toronto, University of Toronto Press, 1991) p.232 no.5 (entry A.0.101.5) which references entry A.0.101.3 ; there were also inscriptions on the backs of the slabs – see same publication reference A.0.101.31 (no.31, p.293) .. the inscriptions reference Ashurnasirpal [II] son of Tukulti-Ninurta [II] – which dates the objects to 883 to 859 BC. (see en:Ashurnasirpal II) Note that the object was one of a pair on either side of the passage – [based on the drawing by Malan] the object’s pair was left-right inverted so that the portrayals matched – a drawing of the object’s pair by S.C. Malan partially in-situ at the excavation can be found in A Visiting Artist at Nineveh in 1850 (C. J. Gadd) in the journal ‘Iraq’ vol.5, 1938 , DOI: 10.2307/4241628 , [1] , description p.120 no. 134, illus. plate XV” … editor Austen Henry Layard , drawing by L. Gruner – ‘Monuments of Nineveh, Second Series’ plate 5, London, J. Murray, 1853 … from Wikimedia Commons … https://commons.wikimedia.org/wiki/File:Chaos_Monster_and_Sun_God.png … public domain [paragraphing mine. –Alice Clagett]