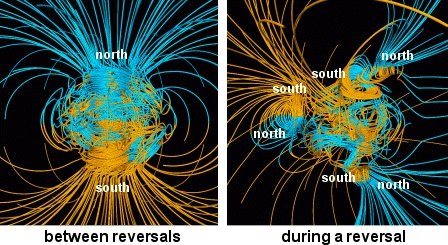 Image: “Supercomputer models of Earth’s magnetic field: On the left is a normal dipolar magnetic field, typical of the long years between polarity reversals. On the right is the sort of complicated magnetic field Erath has during the upheaval of a reversal,” written by Aaron Gronstal, 23 November 2017, in “Research Highlight: Reversing the Geomagnetic Field,” in Astrobiology at NASA: Life in the Universe … https://astrobiology.nasa.gov/news/reversing-the-geomagnetic-field/ … public domain

Image: “Supercomputer models of Earth’s magnetic field: On the left is a normal dipolar magnetic field, typical of the long years between polarity reversals. On the right is the sort of complicated magnetic field Erath has during the upheaval of a reversal,” written by Aaron Gronstal, 23 November 2017, in “Research Highlight: Reversing the Geomagnetic Field,” in Astrobiology at NASA: Life in the Universe … https://astrobiology.nasa.gov/news/reversing-the-geomagnetic-field/ … public domain

Just before the Laschamp Excursion, for instance, when cosmic rays inundated Earth, some very large animals became extinct in Australia. Possible causes that have been proposed are cosmic rays, climate change, and the arrival of aborigines in Australia.

During our recent influx of cosmic rays (and comcomitantly, odd to say, global climate changes, as may have been the case just before or during the Laschamp Excursion) the COVID-19 pandemic occurred. I feel this had to do with a genetic mutation in a virus that resulted in peril to human beings on Earth. I feel the genetic mutation was caused by the influx of cosmic rays.

Everyone will be conversant, through the news media, with the fact that others attribute the cause to Chinese warfare experiments, to sale of exotic animals in marketplaces in China, and so on; but I favor the cosmic ray mutation hypothesis.

In a greater leap of faith, I attribute the vast and otherwise inexplicable changes in the Omicron variant of COVID-19 … the relatively innocuous and highly infectious variant that will, I have a hunch, be the end of the highly lethal nature of COVID-19 … to a remarkable genetic engineering feat by our extraterrestrial allies the Martian Bacterial Colonists of the Human Colon.

They have done it again! They have prevented decimation of their ‘space stations’ … the human beings … by creating a relatively harmless COVID virus variant that is so infectious it has a great competitive advantage over the very lethal earlier variants. For more on my unique hypothesis regarding the Martian Bacterial Colonists of the Human Colon, see my blog category Mars – Martians – the Elder Race and the related subcategories.

To get back to the changes that took place on Earth during the Laschamp Excursion, there was also the extinction of the Neanderthals at about that time. Also, humans began painting cave art at about that time. Hand art in caves at that time indicates the use of red ochre, which is a sunscreen.

This is the hypothesis I favor; others say the extinction of the wooly mammoth, which was food for Neanderthals, had to do with climate change. That leads me to these questions:

This blog has been added to … Link: “Compendium of the Martian Archives: Bacterial Colonists of Earth,” by Alice B. Clagett, written and published on 9 July 2017; updated … https://wp.me/p2Rkym-7sz ..

NOTE: Electromagnetic flips of the Sun’s electromagnetic field every 11 years or so apparently generate social unrest and revolutions on Earth. For more on that, see …

NOTE: This article proposes we have been, for about a decade now, in the early stages of a new excursion similar in far-reaching ramifications to those that took place around the Laschamp Excursion …

Link: “Scientists Link Earth’s Magnetic Reversals to Changes in Planet’s Life and Climate,” based on an interview that aired on “Living on Earth” from PRX, and quoting Carolyn Gramling, a climate writer at Science News, in The World, 19 April 2021 … https://theworld.org/stories/2021-04-19/scientists-link-earths-magnetic-reversals-changes-planets-life-and-climate …

Link: “The Truth About Earth’s Core,” by Paul Preuss, 12 May 2003, in Science Beat: Berkeley Lab … https://www2.lbl.gov/Science-Articles/Archive/Phys-earth-core.html …