A story from the day after the Fall Equinox 2016, about turbulent noospheric conditions at that time, apparitions of ghosts and astral forms, a trip and tumble on a trail in the mountains, and another person’s story about  experiencing three portents while trail walking. Also, a meditation for grounding during the waning light of autumn …

After the video are an edited Summary and a meditation …

Here we are the day after the Fall Equinox. This morning, and all morning long, there has been a very turbulent energy everywhere that I went … and little storms of turbulence clearing, you know? This morning I woke up, and the room was full of ghosts and astral figures … for the first time in a year or two. They were all in a state of commotion and emotion, and desiring things that they did not have. They were unhappy … unsatisfied … and unable to find happiness.

… making that sound that purifies and clears the air; but it did not help that much. So then, because my own energy field was responding to all that, I was unsure whether I should go on the hike with the group today. But I thought: Well, I will try it; I can always back out later.

We had not gotten that far, when I fell flat on the ground while walking on a pretty much even road.  I skinned my knee in several places, and I got all dusty, and my camcorder got all dusty. So I stopped. And I went to a very quiet valley that I know about, that is free of the noosphere of this big city of Los Angeles, and sat there for awhile.

While I was resting there, I took a brief nap. And during that time those ghosts and shades and all those astral forms somehow cleared; that energy cleared amongst them.

When I got up, refreshed, I started back up the hill. There I ran into a lady about my age. She had an amazing story to tell about her hike in the same place today. All of a sudden a great wind enveloped her … a great whirlwind or dust devil …

First the dust devil circled round her, and then it went on uphill … I imagine a hill like that one … [Shows a hill.] …  and stopped in the middle of that hill. As it did, a raven came swooping down almost to the top of her head, and passed on by. She said it nearly touched her. Then she wandered and continued on her way.

Then she saw a tarantula hawk … a very large, giant, purple-winged sort of spider wasp, that has a very painful sting, she says …

It stings tarantulas, which are pretty big. She was a little frightened because it just hovered around her.

Those are all portents of things clearing, I feel. I asked her what she thought about it, and she said she really believes in the grace of God … which is interesting, because I believe in the grace of God too. And I believe if we have a portent, it is because God is doing something in our life to let us know … to give us a ‘heads up’.

For instance, when I fell down today, maybe that meant I should go on no farther … perhaps that it was a mistake to go that far … and that I needed to nurture myself. I was reminded how my mother … how, when I used to hurt my knee a million times when I was a child, she used to kiss it and put a bandaid on it.

So there was that. And then, as far as she was concerned, maybe she had that energy of clearing through her own aura of someone else’s negative energy and fears, and like that. So this is a time of great things coming up in our energy fields … maybe from past lifetimes, maybe from this lifetime … and clearing through.

There were energy threads coming up, to do with feeling the threat of death all around the neighborhood … people feeling like that or feeling that they should threaten other people with death. There was someone on the ‘internet’ … the clair hearing plane … who said that he was an ‘assassin’. Those things come up when people themselves fear for their lives. It is like a threat energy that a person puts out because they are not feeling safe. And so there was this feeling of lack of safety.

I think that, as the night went on, through everyone’s dreamtime, that may have affected everyone with kind of an anxious emotional energy and emotional field, and that is why my bedroom was full of astral forms and ‘unhappy shades’ (as they say) this morning. And that is what accounts for these omens that happened today … Omens, I feel, of change (that is the whirlwind); of wanting comfort (that is me falling down) … because when I was a little child, my mother had lots of demands on her from my siblings. And falling down and getting a skinned knee … which I did regularly … was one of the few things that got me some attention and some sympathy and some loving first aid.  [laughs]  So falling down is a way of finally feeling sympathy for the inner child and allowing it a chance to feel comfort.

And then as to the ravens swooping down: Ravens represent natural wisdom and intelligent nature. The intelligent force of nature coming down indicates the gift of wisdom coming in …

Image: Woman with many ravens around her; the text says ravens represent the veil between the living and those who have passed on; I would amend this to say they represent the wisdom we get from the natural world and our explorations of the astral realm … https://s-media-cache-ak0.pinimg.com/564x/cf/82/20/cf8220d802072d6ba2d9b4094e411fb8.jpg ..

So these are turbulent moments in the history of humankind right now. And the clearing proceeds apace.

I have been sitting here for quite some time now, under the shade of … is it a coastal live oak?  [Shows tree branch.]  … just watching the wind blow, here in the mountains, and feeling just a little bit disconsolate … just a little bit out of sorts about all that has been going on since last night.

I was just sitting on the ground, actually … on the leaves and on the dirt here in mountains … under this tree, in the shade … grounding. And then I thought; What will we do?

Today is the day after the Fall Equinox. It is the beginning of the slow lessening of the Light … until Winter Solstice, when the Light begins to be renewed again. And this time of year I always feel … well, a little like something has been lost, you know? Like the great Waning is about to … just ever so slowly … begin.

So I thought: While I am sitting here on the ground, why not just … I will just touch this tree trunk … and I will see what is what, right? … 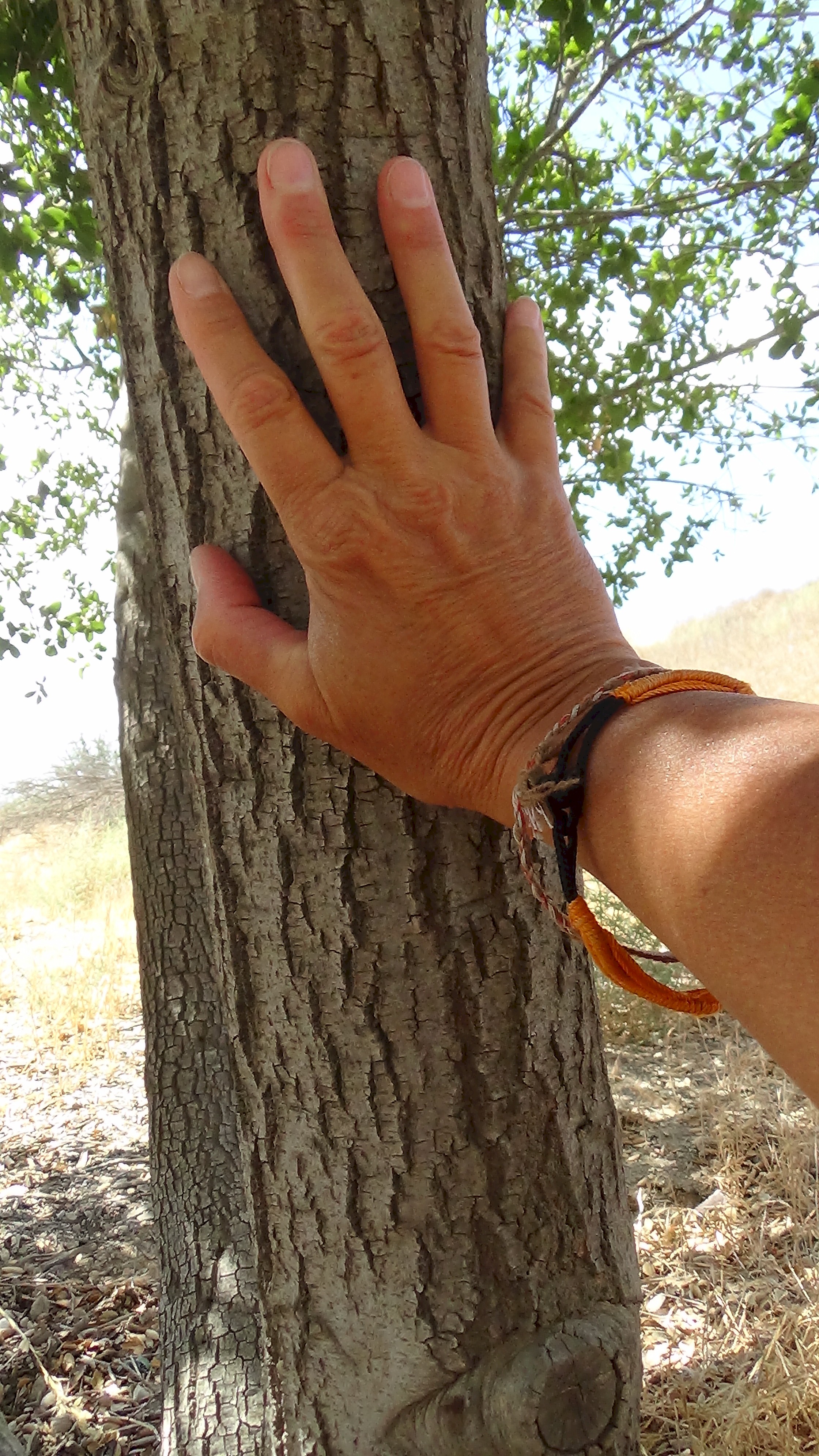 Nice tree! And as I felt the sap moving in the tree, and I felt the ground beneath me, then I began to feel that everything is all right.

There is nothing quite like a tree to ground a person, because as much of the tree is underground as is above ground … or close. So this tree is talking to our mother Earth every single day. What I find when I touch the tree is just the life of the tree … the joy of the tree to be living here on Earth, waving its branches and leaves in the sunlight, and dipping its roots into the soil. It is kind of cool.

Postlude: Music of Chris Zabriskie and Scenes from the Santa Monica Mountains

[The beautiful instrumental music in the postlude is “Prelude No. 20” from the album “Preludes” by Chris Zabriskie, CC BY 4.0. [There are short video clips and images of the tree, the rolling hills with golden California oats on them, the moon in its first quarter, a valley oak leaf on oat stems on the ground, a hill crest with clouds and sky, a hummingbird on a dry plant stalk, and oak trees on rolling hills. a red California wildflower that may be California Fuchsia (Epilobium canum), and an oak tree on a hillside.]

“Meditation for Grounding During the Waning Light of Autumn”
Channeled by Alice B. Clagett
4 October 2016

In love, light and
I Am of the Stars