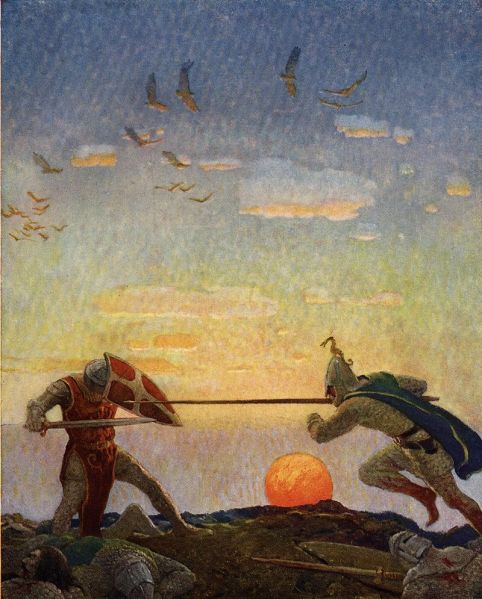 Image: “Illustration from the 1922 book “The Boy’s of King Arthur”, p 306, depicting the final duel between King Arthur and Sir Mordred in the Battle of Camlan,” by N.C. Wyeth, 1922, in English Wikipiedia … https://en.m.wikipedia.org/wiki/File:Boys_King_Arthur_-_N._C._Wyeth_-_p306.jpg … in CC BY-SA 3.0 … DESCRIPTION: “Illustration from page 306 of ‘The Boy’s King Arthur’: the death of Arthur and Mordred – ‘Then the king … ran towards Sir Mordred, crying, ‘Traitor, now is thy death day come.'” … COMMENT: Although this is a drawing of a battle between King Arthur and Mordred, it reminds me, by its deadly intent, of the battle between the Saracen and the Christian that was an example for me, in a past incarnation, of my own self embodied in ‘another’, whom I sought to kill, only to find myself mortally wounded through my own murderous intent.

ALICE’S PERILOUS TALES: THE MAN WITH THE SERRATED SCIMITAR

On 13 June 2019 I parked my car at the trailhead at the end of Decker School Road in northwestern Leo Carrillo State Park in the Santa Monica Mountains, California, and began a walk along Nicholas Flat Trail, which leads to Nicholas Pond and then down to the Pacific Ocean, had one a yen to walk that far. The thing I remember most vividly about that walk was this …

I parked my car at the trailhead and began walking along the trail. There was a gentle rise to my left, and a gentle descent into a dry stream bed to my right. It looked to me as if the terrain had been burned over during the great Woolsey Fire that began in early November 2018, and burned about 100,000 acres of land in the Santa Monica Mountains …

I heard two men conversing from down the trail in the southerly direction I was heading; from the sound of their voices, they were heading toward me.

I was carrying my camcorder and dawdling along the trail as I took photos of the landscape and plants along the way.

Pretty soon I saw two young men, maybe in their late 20s or early 30s, coming toward me along the trail. They were strangers to me, walking side by side, and taking up the width of the narrow trail. One was a little taller, maybe nearly 6 feet tall, spare and lean. The other was maybe three inches shorter and a little more muscular; he was an athletic weight for his age.

The shorter man, who approached along the left edge of the trail, was carrying in his right hand a curved scimitar that looked about like this 25 inch stainless steel blade …

… except that, as I recall with puzzlement, part of the top edge of the scimitar was serrated.

I stepped to the left-hand side of the trail, which was higher and, I felt, more defensible. From that slightly higher elevation I faced the trail. In my left hand was my camcorder.

The man with the scimitar sized me up as he approached, swinging his two-foot steel blade lazily back and forth as he walked. Then his glance fell upon my camcorder, and his energy field contracted slightly.

He said to me: Is that a camera?

As the two men drew abreast of me, the hairs of my left leg, which was a foot beyond the left side of the trail, sensed a change in the breeze as the scimitar swung past my lower body. Then the men walked by.

As I waited, I heard them reach their car. Then two car doors slammed. As I looked up, their cars drove back up Decker School Road.

As I began walking farther along the trail, a vision came to me on the astral plane which seemed to me to be the daydream of the scimitar-carrying man. In the dream, the two men were walking together in the southerly direction I had been heading.

They came to terrain that was flatter and more open. A young man was there, standing all alone; it seemed to me he importuned them sexually. In the dream, the man with the scimitar gathered his strength and will to slay the stranger. Then suddenly, the vision vanished.

Aside from this encounter with the two men, it was a very pleasant outing. I was pleased to find hundreds of tiny California toads hopping through the wetlands around Nicholas Pond. This is indeed a rare sight in Southern California, most likely occasioned, I thought, by the greater than average rainfall last winter.

The pond, too, was more full of water than I had ever seen it before, in my many years of wandering the Santa Monica Mountains.

Many of these photos are featured in this video … Link: “Nicholas Flat Trail and the Music of Chris Zabriskie,” compiled by Alice B. Clagett, filmed on 13 June 2019; published on 3 October 2019 … https://wp.me/p2Rkym-eno ..