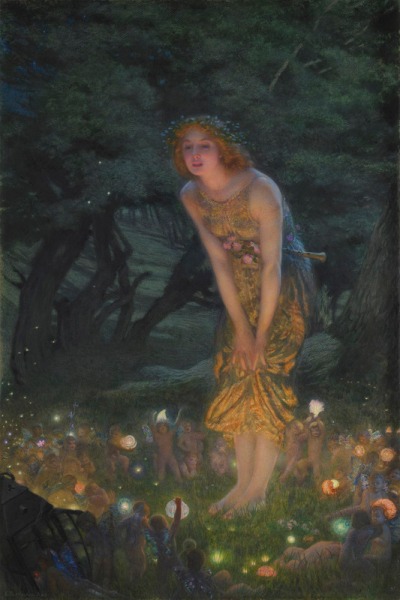 Here is a video about overcoming fear of being in the woods in the dark. I went camping overnight at Mesa Verde National Park; was feeling pretty tenuous about the whole thing …  It worked out fine! That night I encountered some nature spirits and had a talk with a deva as well.  I also had a chance to view the ‘Supermoon’ in the early morning hours!

I am out here in Mesa Verde National Park, today. It is Friday night, and I have an idea that I might try camping out. I have to say that I have not camped out in a long time. And I have a few trepidations, a few fears about it. Let me show you my setup here: [shows campsite].

About My Camp Site

So I found this shady spot, with a picnic table, and a barbecue, and then I found out that I did not bring my tent along. But fortunately, I did bring along one of those screen tents. And I have a plan, because it is the monsoon season right now. And it rained like all get-out last night. So I have this big tarp down here [under the screen tent], and my idea is, if it rains tonight, I will pull the tarp out from underneath the pins (tent pegs) there, and put it over top of the screen tent there, and then pin it on the other side. That is a makeshift plan for sure, but that is the best I could do right now.

And luckily, this place is just full of nature spirits. And I feel very safe here. And there are families on either side; there is a tent over there [to one side of my site], and then coming around to the other side, there is a beautiful dwarf oak grove, and a nice family on the other side. So I am pretty safe here.

The folks that I follow regarding ascension are saying that one of the most pleasant experiences right now is to be camping out in the relative wilderness. Sometimes people suggest a National Forest, but I am a little too chicken for that. So I am trying a regular campground.

There are bears here, but  hear they are fairly friendly bears. Only, you have to keep all your food and water in the car. And they do not have that Yellowstone trick of ripping open your car here yet, fortunately. So I hear it is probably going to be a pleasant night.

And it is the night of the supermoon too; the first of three this summer; around 5:30 in the morning I should see the supermoon, if I am awake.

Stories by Alice: About Fear of Camping Outdoors as a Child

I thought I would tell you a story about my fears of camping out. It has to do with when I was about … oh, maybe 12 years old. And I had this fear of the forest. And the funny thing is, my family lived right on the edge of a forest, a long, long way from other people.

Stories by Alice: The ‘Phantom’ Dog at Twilight. And one time when I was young, I had seen, next to the pigeon house … which I had to go down and close up at night, so that the hawks and weasels could not get in … I saw a ‘phantom’ dog come out of the forest. It seemed like a German shepherd or maybe a wolf … It was scary to me, for some reason. And ever since then, I had a fear of the forest at night.

When I was 12, I decided to face this fear. And I convinced my little brother, my very younger brother, at that time, to go out and sleep on cots with me in the woods, right near the house at night. Right?

And so, all was fine, We had our blankets and our pillows, and we were within sight of the house. But I had never slept outside before (except in a group camping situation with the Brownies). So, I feel asleep. And he fell asleep.

An undetermined amount of time later I woke up. And I thought I heard a wild animal getting closer and closer, snuffling and carrying on in the dark. I was paralyzed with fear. [laughs] I hate to tell this story, even though it is so many years later: I just lay there, paralyzed, for a long time.

It seemed like the sound was getting louder and louder. Finally, I summoned all my courage, and I opened my eyes, and I looked around me, and I found out that it was my little brother, snoring. [laughs] But I was so terrified that I woke him up … and it was not that easy to wake him up … And I convinced him to go back in the house. And I had to invent an excuse for my mother! So, altogether not that pleasant of an experience.

Stories by Alice: Conquering My Fear of Camping Out in Early Adulthood: The Yellowstone Park Vigil, Part 2

So then, I was still frightened of the woods at night. So then, I waited till I was in my 20s. And at that time, three terrible things happened to me, all at the same time. It was almost as if the world were ending. It was one of those turning points in a person’s life.

And in my young life, I had seen no precedent. So, I lost my job; it was a great job; one of my first. And I lost my prospect of a boyfriend, and that was very important to me at that time, because of the emotional turmoil around my divorce. And I learned that my father had a terminal illness.

And then I went to Yellowstone Park. [laughs] Then I thought: It is time to finally conquer this fear that I have; there i’s no reason to have this terrible fear; right? I do not like having fears; do you?

So that night I camped out in a campground a little like this one, and I remember I had nothing but my sleeping bag on the ground. And I lay awake all night long, waiting for whatever it was to happen. [laughs] And when the morning light came, I was still alive. And all was well.

And so, I am hoping that experience will carry over to tonight, and will protect me. I have called upon the devic realm. And I see the devic spirits, the nature spirits, glittering through the oak leaves here. It is terrific. And so, I hope I have the courage to stay here, because I have heard it is one of the best places to be right now. And I will let you know later whether or not I succeed … 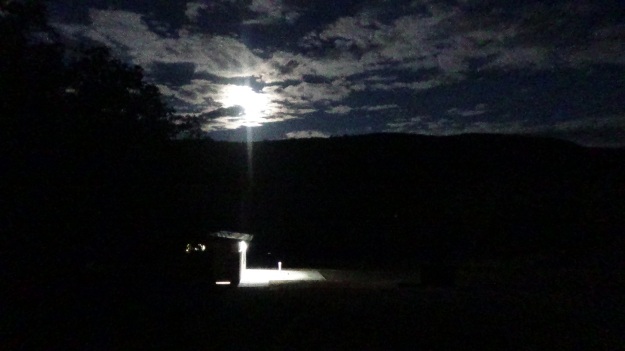 So, the night went just great. About an hour into the night, there was a rainstorm. And what do you know … the tarp worked just great as a rain fly. And there were no incidents whatsoever during the night. It was very quiet here. And for the first time in a long time, I had untroubled sleep.

On Encounters with Nature Spirits and a Deva That Night

I could see the nature spirits, like little bright lights winking inside of my screen tent. It was great! And they were talking to me; it was really cool. They are so sweet! They are incredible.

And I talked for a while with a deva. You know the devas are not too happy with human beings right now, because of the way we have treated the Earth. And the Earth is their special responsibility. And I really understand their point of view.

As far as Ascension is concerned, the devas have their healing work to do too. And a few prayers for them might be a good idea. So that is what I did last night: I wished them the very best: Perfect healing for all the wonderful work they do, and for their wisdom, their care of Earth, their kindness to all the nature spirits they instruct and guide.

I had a wonderful night, really. When I woke up this morning at 5 am, everything was so quiet! It was terrific. So I will show you just a little bit of the scene. I will sign off. I would just like you to know, Mesa Verde is a really special place. Really special, really blessed. And for people that reach a certain age, according to the Forest Service, it is $10 for a lifetime pass, and then you get half off on your camping, which is cheap in the first place. The people who camp here, and the rangers, are very nice. So! A very successful camping experience.