A story about faeries, woodrats, and a gift for a tree faerie. A Summary follows the video …

I found a spot under a tree, with a beautiful view, and a woodrat nest, on top of a circular pile of stones. And next to the nest, on the other side, was a very old tree with plenty of leaves.

And I spoke to the faeries there. They were very particular faeries, and they said: If you’d like to give us a marble, we’d like a clean marble. Don’t put it down low. Try to put it up high.

And then they sounded a little perturbed. They said: Not where the woodrats can get to it!

So I said: Ok! And I looked around all over this tree, and finally, I found a place right here … 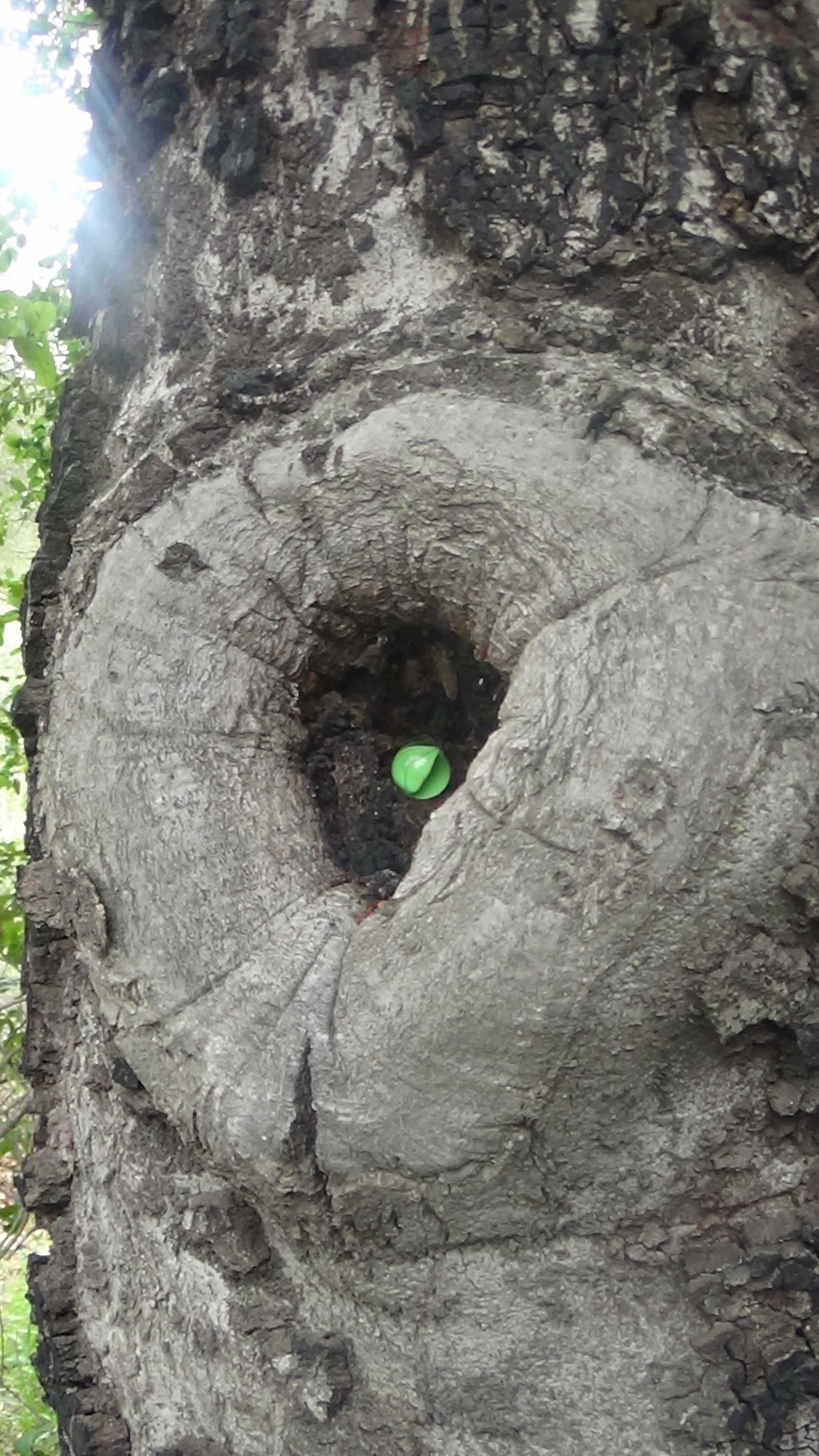 Image: Green cats eye marble, a gift for the faeries, in a hole in the trunk of an oak tree, by Alice B. Clagett, 29 January 2015, CC BY-SA 4.0, from “Awakening with Planet Earth,” https://awakeningwithplanetearth.com ..

Image: Green cats eye marble, a gift for the faeries, in a hole in the trunk of an oak tree, by Alice B. Clagett, 29 January 2015, CC BY-SA 4.0, from “Awakening with Planet Earth,” https://awakeningwithplanetearth.com ..

… the perfect place for my gift to the faeries!

A nature spirit story for you! There is an edited Summary after the Video.

Here is a little place, I see, where people have been sitting under a beautiful tree … A live oak tree. And here [shows stumps used as seats on the ground] they have taken a couple of stumps, and made them into seats.

And over here [shows big oak tree branch on the ground] on this long branch of the oak tree … looks like it broke off and fell down, and now it has become quite the bearer of oak leaves once more. So it is living just fine there … which is often the case with these California live oak trees.

And over here, where nobody will bother it … because I forgot my cats eye marbles today … So I looked around, and I asked the nature spirits if it would be ok to put one of the stones from outside, over here [on the ground under the tree] as a present for them.

And they said: Those are our stones now!

So then I saw some nails lying around on the dirt outside. And I know that those nails are very bad for the birds and the animals … that they eat them, and that it can injure them.

And so I said to the nature spirits: Well, how would it be if I were to pick up these nails and take them back, because I would not want them to harm your animals?

And they said: Oh, that would be fine!

So then I had a thought … Someone suggested to me, mind to mind; a young person that I know said: What if you were to take some of those stones, and make a circle for the nature spirits?

And so I asked the nature spirits, and they said: Oh, yes, we would like that!

So after I picked up the nails, I picked the prettiest stones I could, around the area, and this is what I made, as a present for the nature spirits. I hope they like it ok … 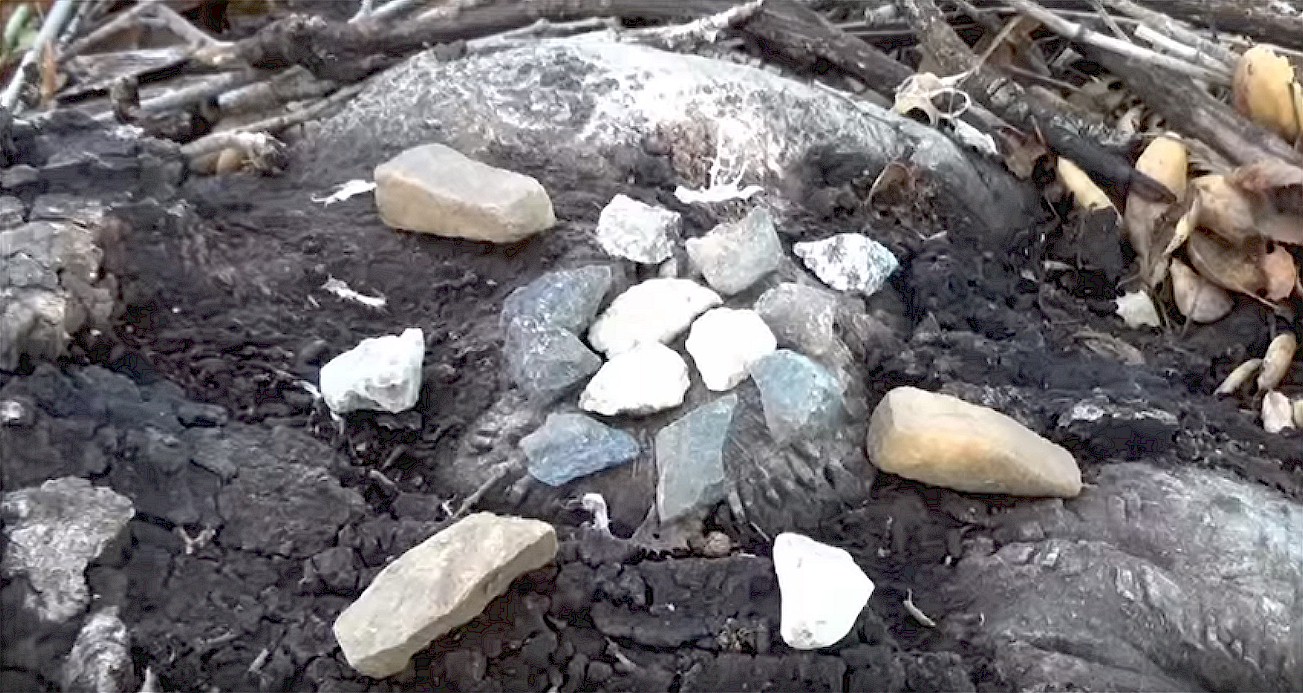 Filmed and published on 27 July 2014; transcribed on 9 August 2018
Location: These channelings took place at the motel where I stayed while attending a spiritual concert at Tara Mandala Retreat Center, Pagosa Springs, Colorado.

Here Is the second of five videos on the nature spirits, the faeries, and the Devic Realm. This is about how I have been making friends with them. I think you will find it is lots of fun!

By the way, if you only have time to see ONE video on Faeries, skip to this blog …

And for links to more information on nature spirits, see the end of this blog …

I got some interesting information this morning from the faerie world … from the nature spirits … what we used to call the ‘fourth dimension’, that is ascending into the sixth dimension now. And I thought I would tell you the quick story of it, even though I am late for being someplace else, because when I get important information, unless I convey it immediately, sometimes I forget; in fact, quite frequently.

So I will try to explain this. You know, it is kind of revolutionary information, so I do not really expect you to believe it. But there may come a time when it becomes true in your life, and then maybe it will be useful to you.

Lately I have been talking some to the nature spirits. They are really beautiful, happy beings. I encounter them when I am out in nature … in a place like this beautiful place here. [Shows hillside wooded with tall evergreens. The location is Pagosa Hot Springs.] And sometimes at other times; but mostly out in nature.

And so, yesterday or the day before, the nature spirits and I were discussing the kind of food they would like for an offering … because, on the internet, I saw that they liked milk. But come to find out, they like fresh-squeezed milk from a cow’s udder. And this is completely beyond my grasp to do that. I heard from the nature spirits, that in Ireland they are doing it. They are still milking cows, and giving a squirt from the cow to the nature spirits.

This is what they told me, and I expect it is true, because nature spirits never lie. They are really straightforward, happy beings of light … really a joy to be around.

And so, but anyway, I could not come up with any good food. So I went to the dollar store, and I bought some beautiful marbles … cat’s eye marbles, right? … all different colors. There were some white ones mixed in. They did not like the milky white ones, but they love the kind that catch the sunlight. And in addition, there was one large marble in each bag. I bought two bags. And those huge marbles, I made sure that they would be good for the devas … the devas, that supervise the wonderful work that the nature spirits do.

And so then, when I would go for my walks, I would try to find a place to put a marble so that it will catch the sunlight, and it will not be dislodged by the winter snows. And under specific instructions from the faeries and elves and like that … to make sure that it is so high that a child cannot see it and take it away. [laughs]

So there is that. I have been having incredible fun with this. You have to learn to talk with them first, to find out exactly what they want. though, because they are very specific. And one of the things they love, I have found, are songs about the Earth. If you are willing to sing songs about the Earth, you had better believe that you will make friends with the natural world.

And so, I found out that there is a group of Medicine Songs by Sacred Valley Tribe …

And so all the nature spirits, all in the wink of an eye, went down to Peru to find the man, Alonso del Rio, that wrote the song “Madre Tierra,” and have him sing it to them …

And so, these are a few of the things that have been happening lately. It is terrific! And so, as I mentioned yesterday, I was out here, near a music shop, and there were faeries just all over a tree. It was just glittering with beautiful nature spirits. And all of the Earth round it listening to the song the singer was singing live, outside the shop … even though there were cars passing by. They loved it! They hang out in this area here quite a lot, because of that music store. [shows hillside with tall evergreens, in Pagosa Hot Springs]

So then, I was heading off to a spiritual concert … [continued here] …

Playing these songs will call the nature spirits! …