Written and published on 24 November 2018

KELVIN-HELMHOLTZ INSTABILITIES AND LIGHT INTEL FROM OUR STAR BRETHREN

… it can be used to transmit Light intel from the service-to-others beings of the Confederation of Planets.

THE CONFEDERATION OF PLANETS

As I understand it from “The Law of One,” the Confederation of Planets comprises about 53 civilizations within about 500 planets. …

Link: “The Law of One: The Ra Material” … Search: “Confederation of Planets” … https://www.lawofone.info/results.php?c=Confederation+of+Planets ..

… whom I mention under the blog category: Star brothers and sisters …

I feel it may be that regular motions of the magnetosphere, such as Kelvin-Helmholtz waves, can be used, like electric wires strung across the countryside, for transmission of information. from the far-flung constellations where our our star brethren live. to Earth and her beings …

DOWNLOADS OF INCOMING LIGHT BY THE SOLAR DEVI

This would be on a different order of magnitude from ‘downloads of the Incoming Light’, which are sent to Earth and her beings by the wise and exuberant beings I term Solar Devi, manifesting in the physical realm as solar flares, which carry Light intel as coronal mass ejections (CMEs) to the ‘Council of Nine’, the various planets within our Solar System. For more on this, see my blog category: Council of Nine – sentient beings of our solar system … and also see …

Link: “The Law of One: The Ra Material,” Search: “Council of Nine” … https://www.lawofone.info/results.php?q=Council+of+Nine ..

Here is the latest cloud reading! There is an edited Summary after the video …

I am starting off on a journey, and I am taking a look at the clouds. So here we go! And what I see are highways in the clouds going on … beautiful, soft, fluffy way to go … 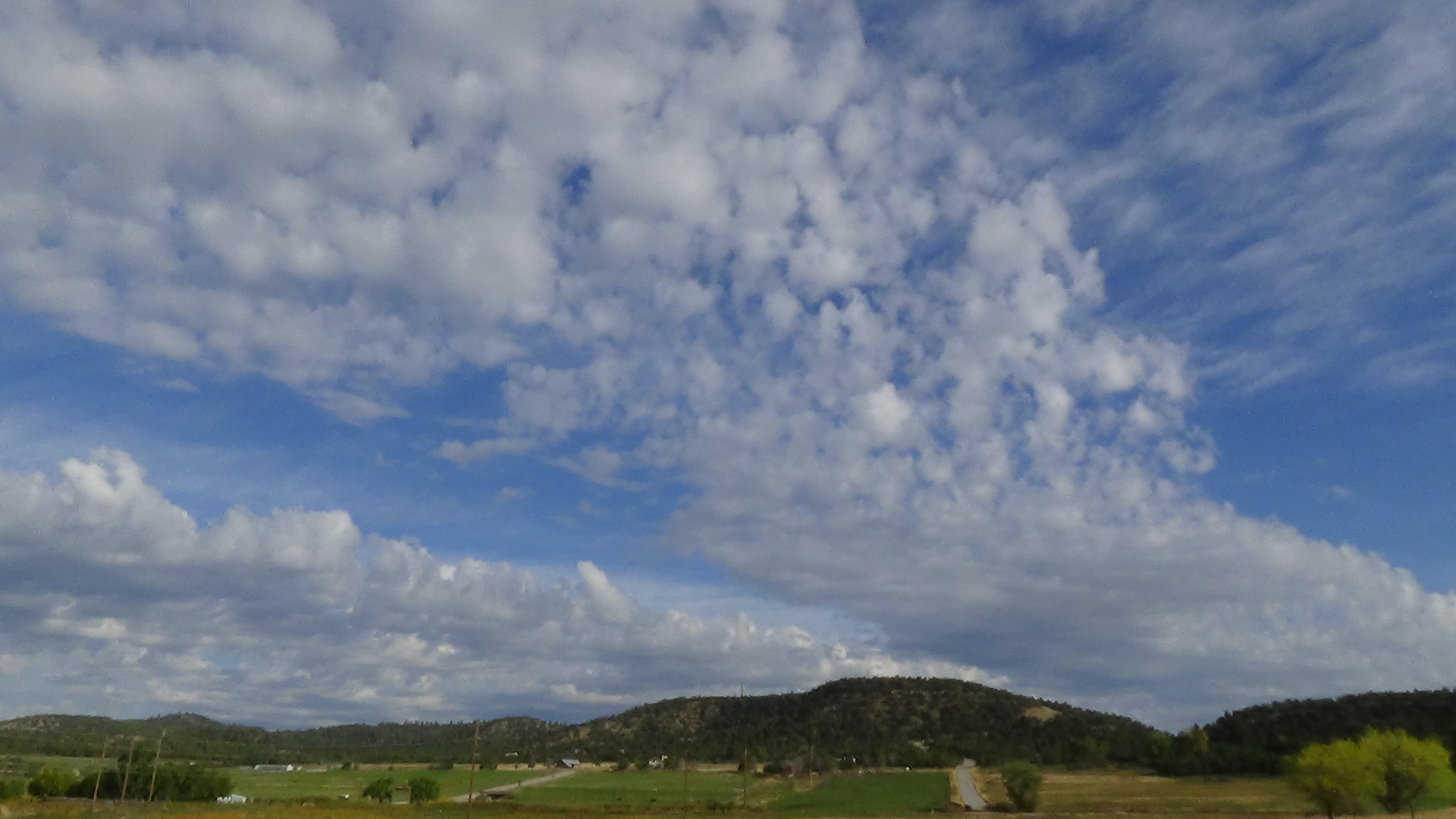 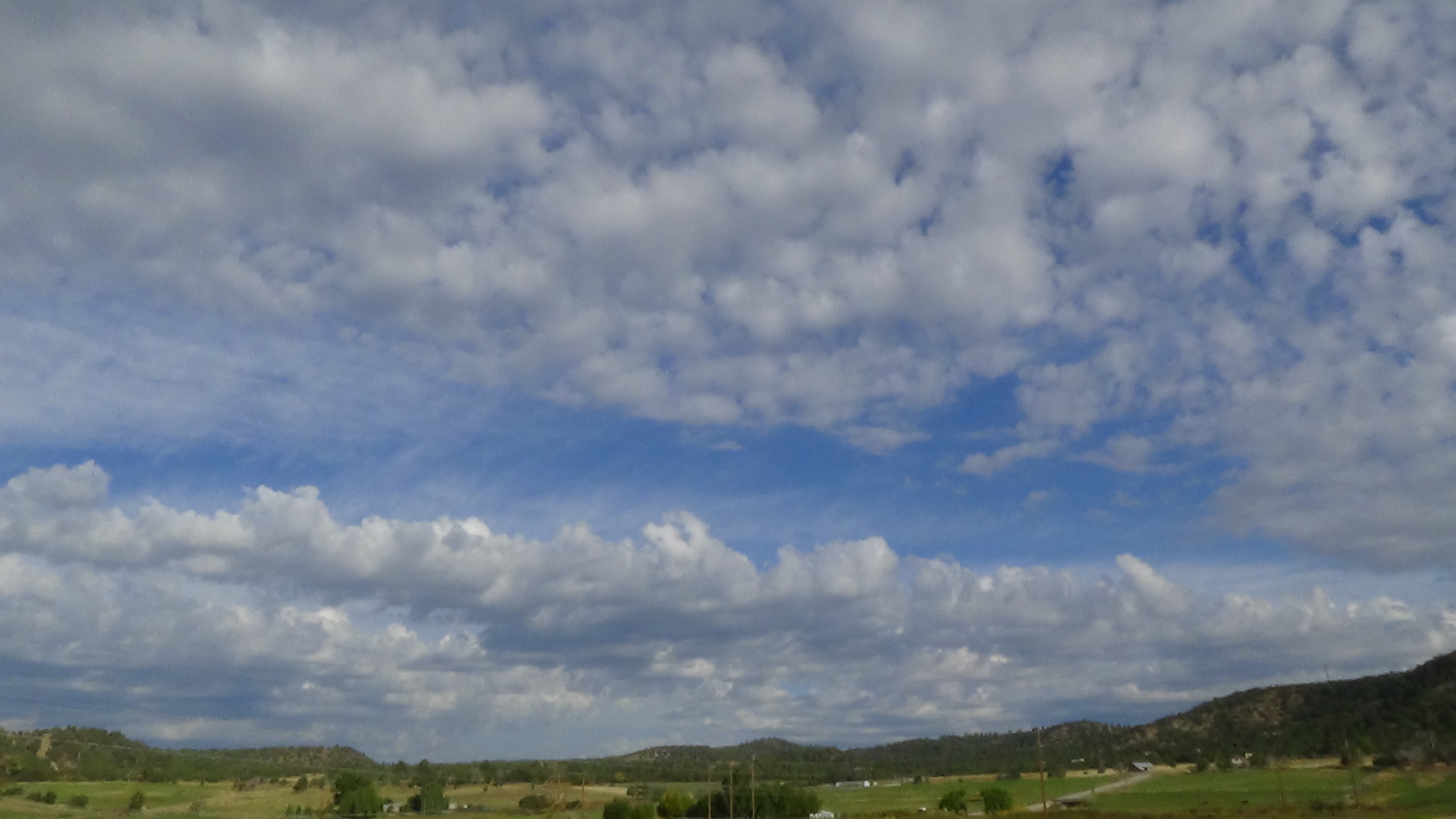 This is about the path of humanity right now too. It looks like we have, not a hard road, but a beautiful and soft road through the sky, and through the Higher Mind of humanity, to pursue, from now until about November 2015 … and then in November, more surprises, and more wonderful things. Talk to you all later … 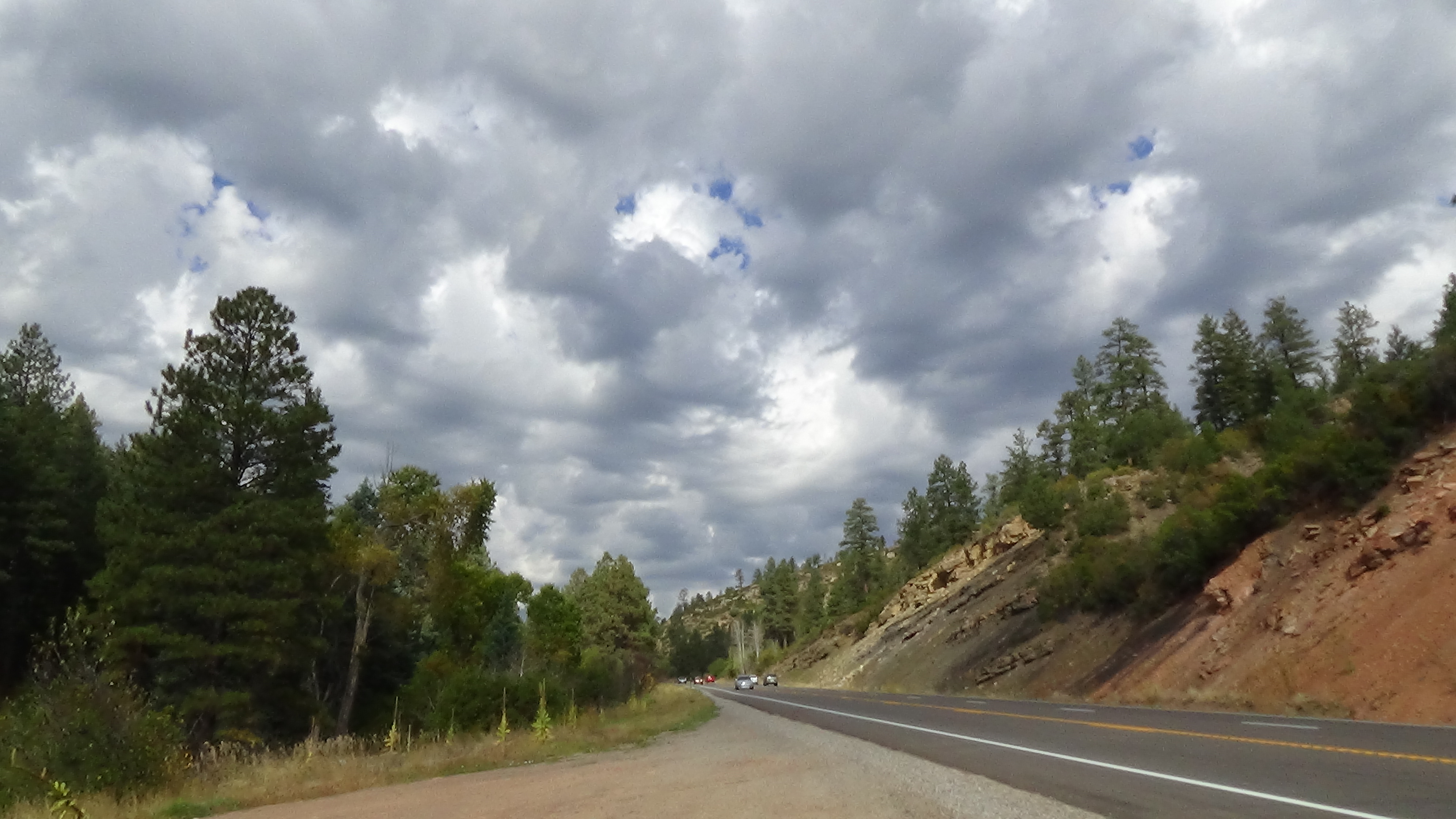 Well, maybe an hour or an hour and a half later, and look at the sky … 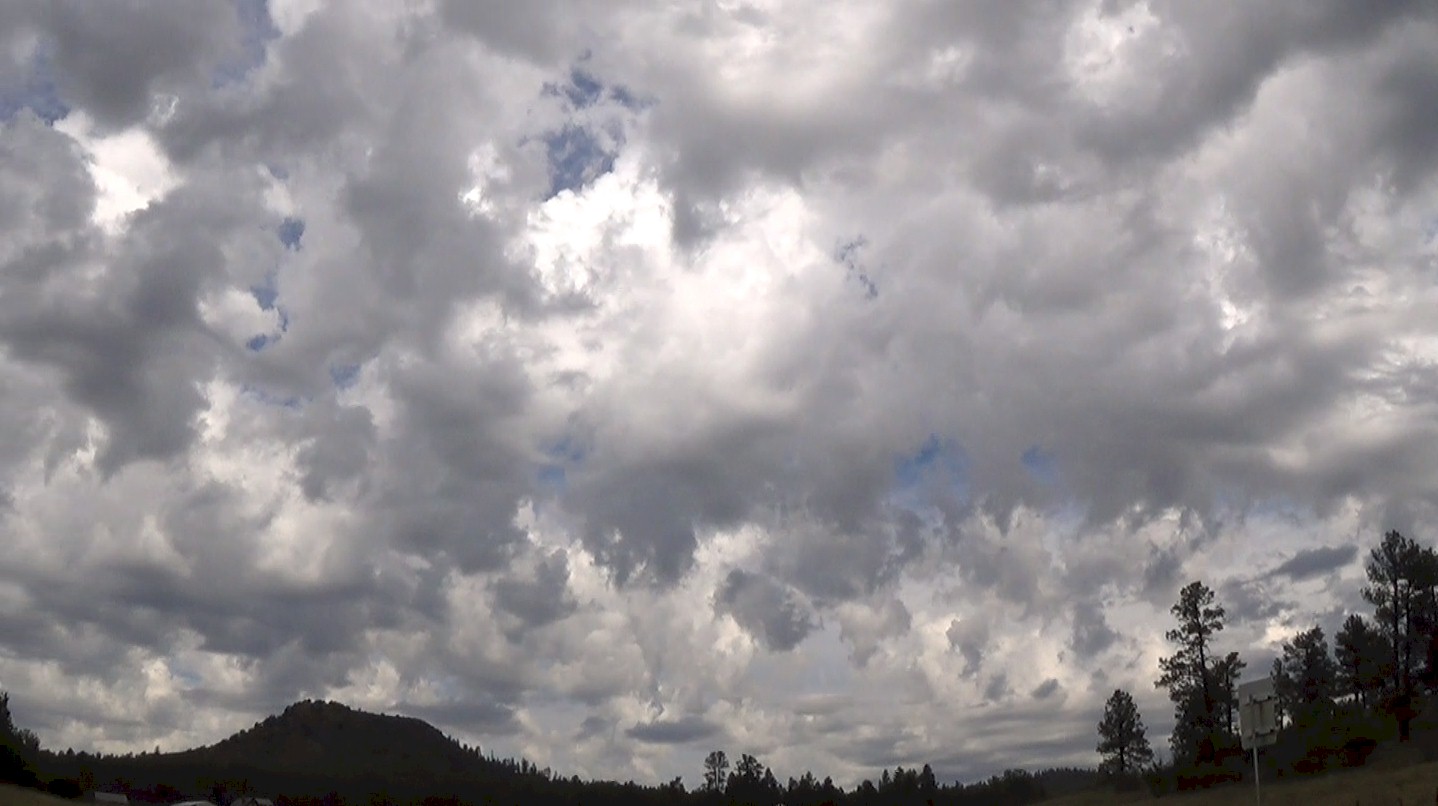 At the end of the day, it looks like the clouds are clearing …

For humankind, I feel that this will take place in the next few months … in October and November 2015. 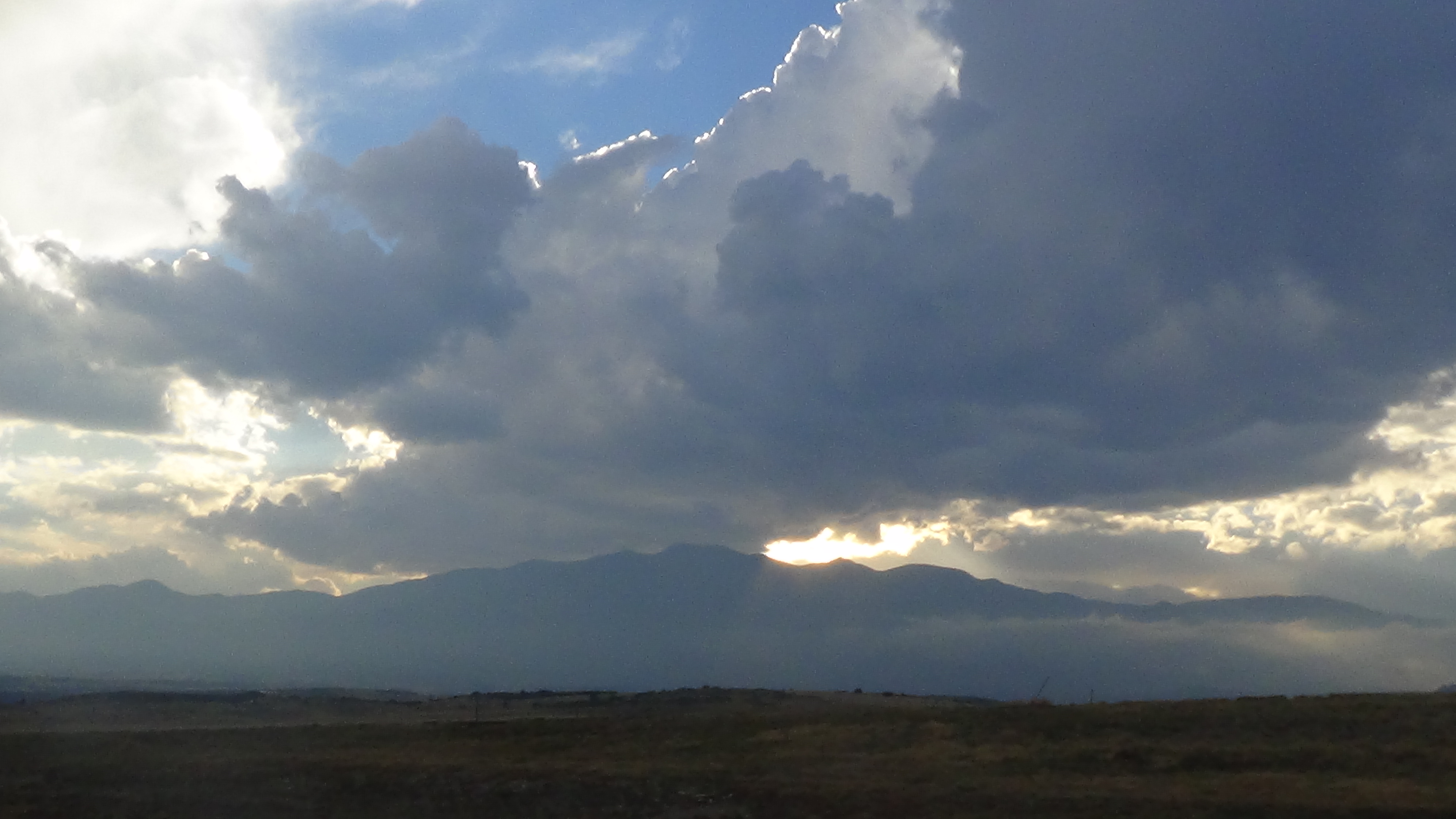 The shift from fluffy cloud roads to slightly stormy pathways in the sky might have something to do with the recent CIR (co-rotating interaction region) … which is to say, a solar wind shear effect, like the meeting of warm and cold water currents in a river … which flow along together for a while, creating some turmoil where they interface.

Then, there are the four or five relatively small M class solar flares this week …

… which produced some CMEs (coronal mass ejections), including one that may slightly glance by Earth’s EMF (electromagnetic field) today, 3 October 2015. Here is the impressive movie of the CME. The sun is in the blacked out area in the center of the movie …

Suspicious Observers (SO) has detailed daily information on solar activity, as well as information on Earth weather and earthquakes. SO feels that the recent CMEs from the M-class flares will impact Earth’s EMF either very slightly or not at all. See …

I liked Tom Lescher’s Pele Report, with its astrological ‘heads up’ for September 2014:

I should also mention, the solar wind from the recent long M-class solar flare is likely to be felt on Earth late Thursday night (11 September 2014) or early Friday morning (12 September 2014).

Also, the 10 September 2014 X-class solar flare has generated an Earth-directed coronal mass ejection (CME), that will be felt on Earth on Friday the 12th or Saturday the 13th of September 2014.

For plots of the GOES X-ray Flux, see the X-ray flux archival information at https://www.polarlicht-vorhersage.de/goes_archive ..

Most flares produce a sharp spike on the plot. The sharpness or dullness of the spike indicates the length of time the solar flare happened. The two most recent spikes are quite fat and dull, indicating that the flare took place over a period of maybe 6 hours … from which we can deduce that the effect of the Earth-directed portion of the coronal mass ejection (CME), or geoeffective solar wind, may be prolonged as well. That is to say, polar auroras will last longer, and our own personal experiences of cognitive dissonance, if we are sensitive to the proton count, may last longer as well.

Speaking of auroras, is it not odd how reminiscent they are of archangels blessing Earth? :

We are in a period of solar minimum right now, which is to say, until quite recently, there have been few solar flares. Periods of solar minimum and solar maximum are normal cyclical astronomical events.

EFFECT OF SOLAR FLARES OR LACK THEREOF ON EARTH’S EMF

When solar flares are Earth-directed, they build up Earth’s electromagnetic field (EMF), which is to say, Earth’s protective aura. Because we have been at solar minimum, Earth’s EMF is currently quite thin. Which may explain why there have been rifts and cracks in Earth’s EMF lately.

The current thinness of Earth’s EMF, and the presence of cracks and rifts in it, make it likely that the geo-effects of the incoming CMEs will be enhanced.

HOW TO PREPARE FOR SOLAR STORMS

Rest and Relaxation. Given the astrological report and the astronomical outlook, I plan to schedule lots of bubble baths, naps, and relaxation from now till Sunday morning. Just in case!

Light Diet. You might want to eat a light diet during this time, so your intestines will have less work to do.

Intestinal Cleanse. An intestinal cleanse is a good idea … colonic, water-and-vinegar enema, (1) or maybe a solution of magnesium citrate (which can be a little more uncomfortable to use because of intestinal cramps). The logic here is that the cognitive effects some folks feel during solar storms have to do with protons pinging off distortions in the etheric field (the body’s etheric template).

Putatively, an intestinal cleanse will clear away some of these etheric field distortions and lessen the cognitive effects of the solar storms. I got this from someone else, but it seems logical to me. Occasional intestinal cleanses are always a good idea for health maintenance.

Avoid Freeway Driving and Rush-Hour City Street Driving. Sometimes incoming solar winds can cause what Tom Kenyon calls cognitive dissonance … one symptom of which can be anxiety (for those so prone). Other folks use the term cognitive diminution to describe solar effects on the human psyche. Thus, this might be a good time to drive the less crowded roads, and to avoid freeway driving, if possible.

Antianxiety Remedies: Angelica Root; Clonazepam (klonopin). Then, if you sometimes feel anxious, it is nice to have on hand an essential oil such as angelica root (check with your medical doctor before using this),  as well as some of the anti-anxiety pill Clonazepam (aka klonopin), which must be prescribed by a medical doctor. I suggest very short-term use Clonazepam, if it is prescribed for you, and only in emergency situations, as there are notable side effects of withdrawal, especially, apparently, withdrawal from long-term use … including some side effects that may persist for a long time, even if withdrawal is very gradual.

Written and published on 11 September 2014; revised

Link: “Cognitive and Emotional Challenges during Chaotic Nodes,” a Hathor Planetary Message through Tom Kenyon … https://tomkenyon.com/cognitive-and-emotional-challenges-during-chaotic-nodes … This is mostly about the pole reversal, but the meditation is excellent.

This video is about commotional energy; Earth’s electromagnetic field; solar flares;  clearing our energy; emotions of fear, anxiety, worry and anger; the incoming intelligent light; and the notion that the universe is a friendly place. There is an edited Summary after the video …

On Noospheric Commotion as It Relates to Solar Events

I am at Sage Ranch; and I thought I would fill you in on a few things. Yesterday was a very commotional day for me, here in Los Angeles; and all last night … all through the night.

I checked Space Weather … https://www.spaceweather.com … And the funny thing is, it seems like there have been no solar flares. No special sky activity. Some smaller flares … C-range flares.

And so, the electromagnetic field of Earth is somewhat less strong than it usually is. And so I wonder if these smaller flares … because of that … are affecting us somewhat, and clearing our energy field.

On Trusting the Divine

So, that is my thought, here today … here in the beautiful, golden sunlight of the afternoon. I feel like the Divine has a way of figuring out everything, down to the smallest decimal point. [laughs] Just exactly what we need to change, you know, without freaking out too much … For all of humanity to move upward.

And so, that is my feeling about all this up and down activity that has been taking place … this purifying energy process, and the new Incoming Light that is just flooding in everywhere. It is not just a flood. It is a very controlled pouring-in.

Intelligence and Loving Nature of Photons and Light

The Divine is very intelligent … even the smallest photons. Light is intelligent, and full of love for all living things. And the more I feel it and observe it, the more I realize this to be true: We are not living beings in a nonsentient Universe. The whole Universe is sentient. You know? And it knows what to do. It knows what is best for us.

On Clearing Through, Rather than Repressing, Negative Emotions

So, what is the point of worrying and being upset, when everything is all arranged for us? [sighs] So, especially when worry and anxiety and fear and anger and upset are clearing from the aura, it is important to remember that. it really helps a lot.

Because, if we stuff down all those negative feelings when we feel them, and say:

I can’t be feeling that! I’m a spiritual person!

… Whatever it is that we feel about it … It is an unpleasant sensation. I refuse to feel it. Whatever we do to forget about it, it is still there, stuck in our aura.

But if we think that the Universe is trying to help us clear, and to be happy … as is our birthright! … then we will not do that. We will just observe what is coming up … All the emotions that are coming up. The physical discomfort. You know?

And rejoice that it is coming up, and the Love of the Universe, and the Incoming Light, are transforming it, and changing it to something much closer to what is true, and joyful.

I say this with hindsight, because I was kind of upset yesterday. But today is beautiful. And today is a good day for philosophizing, I guess.

So, rays of Light to you. Rays of Love. And talk to you later.