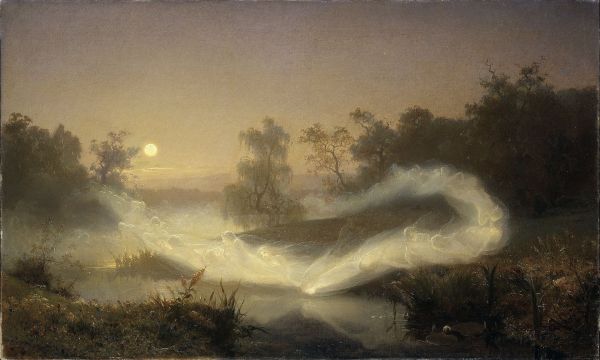 I have found very interesting information on nature spirits amongst the writings of the School of Theosophy. For some of this, one must go to the source, as it is still under copyright. As well, I have found a good source of information, from C.W. Leadbeater of the School of Theosophy, regarding the nature spirits, that is in the public domain. In the below excerpt, I have bolded what seemed more important from my own perspective …

“So many and so varied are the subdivisions of this class that to do them anything like justice one would need to devote a separate treatise to this subject alone. Some characteristics, however, they all have in common, and it will be sufficient here to try to give some idea of those.

“To begin with, we have to realize that we are here dealing with entities which differ radically from all that we have hitherto considered.

“Though we may rightly classify the elemental essence and the animal Kâmarûpa as non-human, the monadic essence which manifests itself through them will, nevertheless, in the fullness of time, evolve to the level of manifesting itself through some future humanity comparable to our own, and if we were able to look back through countless ages on our own evolution in previous manvantaras, we should find that that which is now ourselves has passed on its upward path through similar stages.

“That, however, is not the case with the vast kingdom of nature-spirits; they neither have been, nor ever will be, members of a humanity such as ours; their line of evolution is entirely different, and their [p. 58] only connection with us consists in our temporary occupancy of the same planet.

“Of course since we are neighbours for the time being we owe neighbourly kindness to one another when we happen to meet, but our lines of development differ so widely that each can do but little for the other.

“Many writers have included these spirits among the elementals, and indeed they are the elementals (or perhaps, to speak more accurately, the animals) of a higher evolution.

“Though much more highly developed than our elemental essence, they have yet certain characteristics in common with it; for example, they also are divided into seven great classes, inhabiting respectively the same seven states of matter already mentioned as permeated by the corresponding varieties of the essence.

“Thus, to take those which are most readily comprehensible to us, there are spirits of the earth, water, air, and fire (or ether)—definite intelligent astral entities residing and functioning in each of those media.

“It may be asked how it is possible for any kind of creature to inhabit the solid substance of a rock, or of the crust of the earth. The answer is that since the nature-spirits are formed of astral matter, the substance of the rock is no hindrance to their motion or their vision, and furthermore physical matter in its solid state is their natural element—the only one to which they are accustomed and in which they feel at home.

“The same is of course true of those who live in water, air or ether. In medieval literature, these earth-spirits are often called gnomes, while the water-spirits are spoken of as ûndinés, the air-spirits as sylphs, and the ether-spirits as salamanders.

“In popular language they are known by many names—fairies, pixies, elves, brownies, peris, djinns [jinns], trolls, satyrs, fauns, kobolds, imps, goblins, good people, etc.—some of these titles being applied only to one variety … [p 59] and others indiscriminately to all.

“Their forms are many and various, but most frequently human in shape and somewhat diminutive in size. Like almost all inhabitants of the astral plane, they are able to assume any appearance at will, but they undoubtedly have definite forms of their own, or perhaps we should rather say favourite forms, which they wear when they have no special object in taking any other. Of course under ordinary conditions they are not visible to physical sight at all, but they have the power of making themselves so by materialization when they wish to be seen.

“There are an immense number of subdivisions or races among them, and individuals of these subdivisions differ in intelligence and disposition precisely as human beings do.

“The great majority of them apparently prefer to avoid man altogether; his habits and emanations are distasteful to them, and the constant rush of astral currents set up by his restless, ill-regulated desires disturbs and annoys them.

“On the other hand instances are not wanting in which nature-spirits have as it were made friends with human beings and offered them such assistance as lay in their power, as in the well-known stories told of the Scotch brownies or of the fire-lighting fairies mentioned in spiritualistic literature.

“This helpful attitude, however, is comparatively rare, and in most cases when they come in contact with man they either show indifference or dislike, or else take an impish delight in deceiving him and playing childish tricks upon him.

“Many a story illustrative of this curious characteristic may be found among the village gossip of the peasantry in almost any lonely mountainous district, and any one who has been in the habit of attending séances for physical phenomena will recollect instances of practical joking and silly though usually good-natured horseplay, which always indicate the presence of … [p 60] some of the lower orders of the nature-spirits.

“They are greatly assisted in their tricks by the wonderful power which they possess of casting a glamour over [that is, hypnosis or mesmerization of] those who yield themselves to their influence, so that such victims for the time see and hear only what these fairies impress upon them, exactly as the mesmerized subject sees, hears, feels and believes whatever the magnetizer wishes.

“The nature-spirits, however, have not the mesmerizer’s power of dominating the human will, except in the case of quite unusually weak-minded people, or of those who allow themselves to fall into such a condition of helpless terror that their will is temporarily in abeyance; they cannot go beyond deception of the senses, but of that art they are undoubted masters, and cases are not wanting in which they have cast their glamour over a considerable number of people at once. It is by invoking their aid in the exercise of this peculiar power that some of the most wonderful feats of the Indian jugglers are performed—the entire audience being in fact hallucinated and made to imagine that they see and hear a whole series of events which have not really taken place at all.

“We might almost look upon the nature-spirits as a kind of astral humanity, but for the fact that none of them—not even the highest possess a permanent reincarnating individuality.

“The life-periods of the different subdivisions vary greatly, some being quite short, others much longer than our human lifetime. We stand so entirely outside such a life as theirs that it is impossible for us to understand much about its conditions; but it appears on … [p 61] the whole to be a simple, joyous, irresponsible kind of existence, much such as a party of happy children might lead among exceptionally favourable physical surroundings.

“Though tricky and mischievous, they are rarely malicious unless provoked by some unwarrantable intrusion or annoyance; but as a body they also partake to some extent of the universal feeling of distrust for man, and they generally seem inclined to resent somewhat the first appearance of a neophyte on the astral plane, so that he usually makes their acquaintance under some unpleasant or terrifying form. If, however, he declines to be frightened by any of their freaks, they soon accept him as a necessary evil and take no further notice of him, while some among them may even after a time become friendly and manifest pleasure on meeting him.

“Some among the many subdivisions of this class are much less childlike and more dignified than those we have been describing, and it is from these sections that the entities who have sometimes been reverenced under the name of wood-gods, or local village-gods, have been drawn. Such entities would be quite sensible of the flattery involved in the reverence shown to them, would enjoy it, and would no doubt be quite ready to do any small service they could in return. (The village-god is also often an artificial entity, but that variety will be considered in its appropriate place.)

“The Adept knows how to make use of the services of the nature-spirits when he requires them, but the ordinary magician can obtain their assistance only by processes either of invocation or evocation—that is, either by attracting their attention as a suppliant and making some kind of bargain with them, or by endeavouring to set in motion influences which would compel their obedience.

“Both methods are extremely undesirable, and the latter is also excessively dangerous, as the operator would arouse a determined hostility … [p 62] which might prove fatal to him. Needless to say, no one studying occultism under a qualified Master would ever be permitted to attempt anything of the kind at all.”

There is more comprehensive information regarding astral entities, drawn mostly from the above source, in this book, a compilation by Arthur Powell from the School of Theosophy …

However, the book is under copyright, so I cannot offer quotes here. I suggest reading the chapter. See especially the description of the sylphs as having human-like intelligence. Apparently, they can individualize through loving the astral angels.