LOCATION OF THE THIRD-EYE POINT

Some mistakenly feel that the third-eye point is on the forehead. This is a mistake that may have been occasioned by misinterpretations of illustrations of the location of the chakras in years past.

The true location of the third-eye point, and the place where Awareness had best be placed during a third-eye point meditation, is on the pituitary gland in the center of the brain.

THE PITUITARY GLAND IS PART OF THE LIMBIC SYSTEM

Here is the difficulty: The pituitary is a small part of the limbic system … 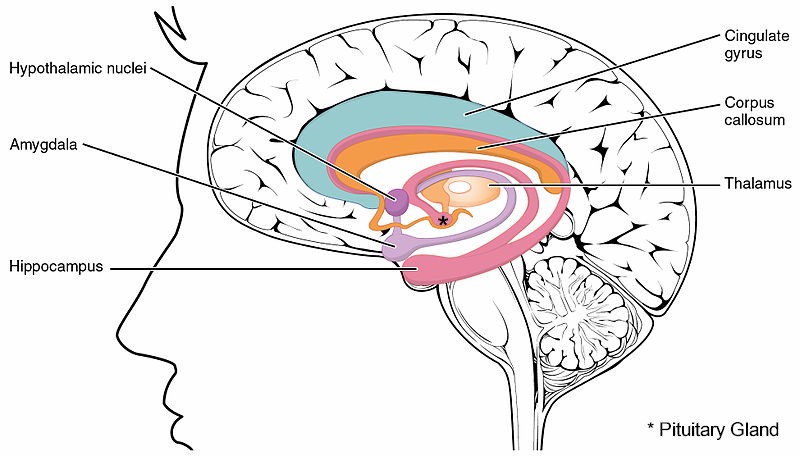 Image: “File” 1611 The Limbic Lobe.jpg,” Illustration from Anatomy & Physiology, Connexions Web site. http://cnx.org/content/col11496/1.6/, Jun 19, 2013, by OpenStax College, 23 May 2013, in Wikimedia Commons … https://commons.wikimedia.org/wiki/File:1511_The_Limbic_Lobe.jpg … This file is licensed under the Creative Commons Attribution 3.0 Unported license. Adapted by Alice B. Clagett … COMMENT: In the image, the colored portions of the brain represent the limbic lobe. The asterisk indicates the pituitary gland, where awareness is placed during a third-eye point meditation.

COMMENT: In the image, the colored portions of the brain represent the limbic lobe. The asterisk indicates the pituitary gland, where awareness is placed during a third-eye point meditation.

The limbic system is involved in what, in the triune brain theory, is termed the reptilian brain. That would be the primitive part of the brain responsible for fight or flight during survival, territorial aggression, and sexual aggression in the animal realm …

Inadvertent Stimulation of the Fight or Flight Response

Similarly, if the third-eye of a meditator is cursed as being the ‘evil eye’ by a group of spiritual adepts, or assailed through black magic by a Satan cult, the result may be a dislocation of the Awareness of the meditator from the pituitary gland to the limbic system, with consequent emotions of fear or rage.

That is the Adi Mantra, which I repeat three times. The words are: Ong Namo Guru Dev Namo …

In recent days, especially in the afternoons and evenings,  I have experienced movement of my Awareness from the pituitary gland to the limbic system.

Moving Awareness to the Neocortex to Correct Third-Eye Point ‘Wander’

Last night, to mitigate this, I tried changing my Awareness from a point at the center of my brain to the Neocortex, which is located at the top and top sides of the brain and extends into the brain about two inches deep …

That worked for me, as a technique to eliminate attraction of reptilian thought forms from others apparently caused by placing my Awareness, in error, on my own limbic system by mistake, thus unintentionally creating a resonance between the emotions of my limbic system and those of emanating from the limbic systems of nearby people.

VIOLENT STRESS RESPONSES OF OTHERS TO THE CORONAVIRUS PANDEMIC

During these months of the COVID-19 pandemic, many are viewing news reports that damage the emotions that emanate from their limbic systems. For instance, many feel fearful. Consequently, waves of fear are sweeping round the planet right now; these are especially felt by empaths, intuitives, and long-time meditators. We must overcome these thoughts of fear, so that we will not attract the fearful thought forms of others.

It is not just violent thought forms that are attracted to us by inadvertently placing our Awareness on the limbic system. If we, as meditators, continue to fall into fear, then we run the risk of attracting violent ‘acting out’ by others, through resonance of our limbic system thought forms with their own.

Right now Angelenos must, because of the Los Angeles mayor’s order to stay at home during the COVID-19 pandemic, remain in their own homes. Therefore the greatest risk of acting out by others right now has to do with family, whose presence we cannot escape in our own homes, and nearby neighbors.

For instance, if we experience emotions of fear and also of sexual arousal, we may find a person living nearby and following us around physically with thoughts of sexual or territorial aggression, which is to say, thoughts of rape, home invasion, or murder.

If we go to a grocery store during the pandemic, we may find staid-seeming people unexpectedly yelling at us in the supermarket line; the topic may be whether we ought wear a face mask, for instance.

We may find that law enforcement stationed at the supermarket doors prevents our entry into the market, while letting someone we, as empaths, know to be infected with the virus enter the store.

In the same way, at an office supply store, we may find the clerk fearful of ourselves, though we be healthy and wearing a face mask, and then standing too close to another customer not wearing a face mask but silently ill (as the empath may discern to be the case based on the other person’s dimmed bodily vigor).

We may find that in posting pandemic advisories for our neighbors on NextDoor … https://nextdoor.com/ … we are attacked, or our posts banned from the site, though our facts be valid.

In other words, in this time of great stress for many, we are very likely to encounter unforeseeable acts of violence, whether through verbal assault or physical assault.

Unavailability of LAPD Response to Domestic Violence, Most Likely Due to Health Crisis

Because of the ‘Safer at Home’ mayoral order in Los Angeles, assault by a person in or near our home cannot be ruled out. Yet my local branch of the Los Angeles Police Department, most likely understaffed because of illness right now, has announced it will not be responding to calls regarding domestic violence right now.

Those of us Angelenos for whom that is true are left to fend for ourselves in regard to assault by family and neighbors; and the possibility of assault is high right now because of the stress everyone is feeling. We must, in all urgency, formulate a means of dealing with this likely danger.

THE IMPORTANCE OF PRAYER AND MEDITATION AT THIS TIME

After hours of urgent pondering, occasioned by incidents such as those described above, what I came to is this: It is very important to pray and to meditate right now, and I emphasize, to do first the one and then the other. The prayers we utter before meditation direct the Awareness to the pituitary rather than to the limbic system. It is prayer that keeps us safe through these troubled times.

I would like to close with an endorsement of this point of view by the Queen of England herself, who stated in the below video the importance of prayer and meditation during the COVID-19 crisis. It is clear to me from her manner and her words how well balanced her own attitude is towards the trouble we face in this time of crisis …