Here is a ghost story for you. I heard the story on the astral plane while walking in Serrano Valley, California. The boy was buried in a cemetery at Homol’ovi State Park in Arizona, in an area of Native American hunting grounds.

“Gad: An Apocryphal Ghost Story”
by Alice B. Clagett
Soundtrack and Words
24 July 2019

I feel there is not one word of truth in this. But I have to admit, it is a pretty good ghost story.

I was resting a minute ago under those trees over there … [shows a stand of oak trees] … and when I got up, I thought about the boy named Gad who died at a very young age out in … was it Utah, I think? … and how I had spoken to his spirit some years ago, and how he was waiting for his father and looking for his father. And he said his mom had gone off to the town because there was not enough water and she needed to go to the town. And then he passed on while his mom was looking for his mother, I guess … But I did not know that part; all I knew was that he was waiting for his dad, whom he really admired very much. And he was hoping to one day have a wife of his own; he was waiting for that day. [smiles]

Since I was speaking with spirits today, I thought maybe I could get in touch with Gad … even though, here I am in California, near the beach … in Serrano Valley … and there is Gad there at the graveyard, out on the Native American reservation … in Utah, I think it was.

So I called for Gad. What do you know, he answered! His accent is just very, very different from that of the people in this pioneer area here. And I asked him if he was still looking for his dad. He said, Yup! He was still waiting for him.

So I asked around, on the astral airs, whether there was anyone there that was the father of a boy named Gad. And a man answered. He said: Yes, yes I know Gad.

I said: Is that your son then?

And he said: Yes.

I said: Could you find him?

And within a minute or two they met up on the astral plane. They were so happy to see each other! It was incredible. And Gad’s father told him: I went to find your mother, but I could not find her.

Gad and his father were very happy to find each other again. And the boy said that he had died at the place where they had settled, but that the Indian braves … that is what he called them … had made a safe place for him there. I am glad they agreed to do that …

I heard the father and son off talking again just now. The young boy said: I said, ‘I think I need a drink of water’ … And then he said: That’s the last thing I said before I died.

And then the father said: Here, son, let’s sit here and sing ‘Rock of Ages’ song. So I guess that is what they are doing now …

Well this is quite something; the father just said: Well there’s your mother!

And I heard the mother say something like: Well, don’t you just know I’m your Rock of Ages woman? And then she said: Why didn’t you find me? I passed on of something that did not have birthday ingredients in it.

So I guess they are all three together now … the father, the mother, and the son named Gad (for a gadfly!) ..,

Now the story keeps on … The man said: What are your name? And he waited …

And I said: Alice Clagett.

And he said: This here are Clementine … meaning his wife.

And he said: Jason. And this are Gad, the gadfly … [chuckles]

That is all for today, as far as pioneer stories are concerned …

This cloud reminds me just a little bit of Gad, and how happy he was to see his father, and then his mother … 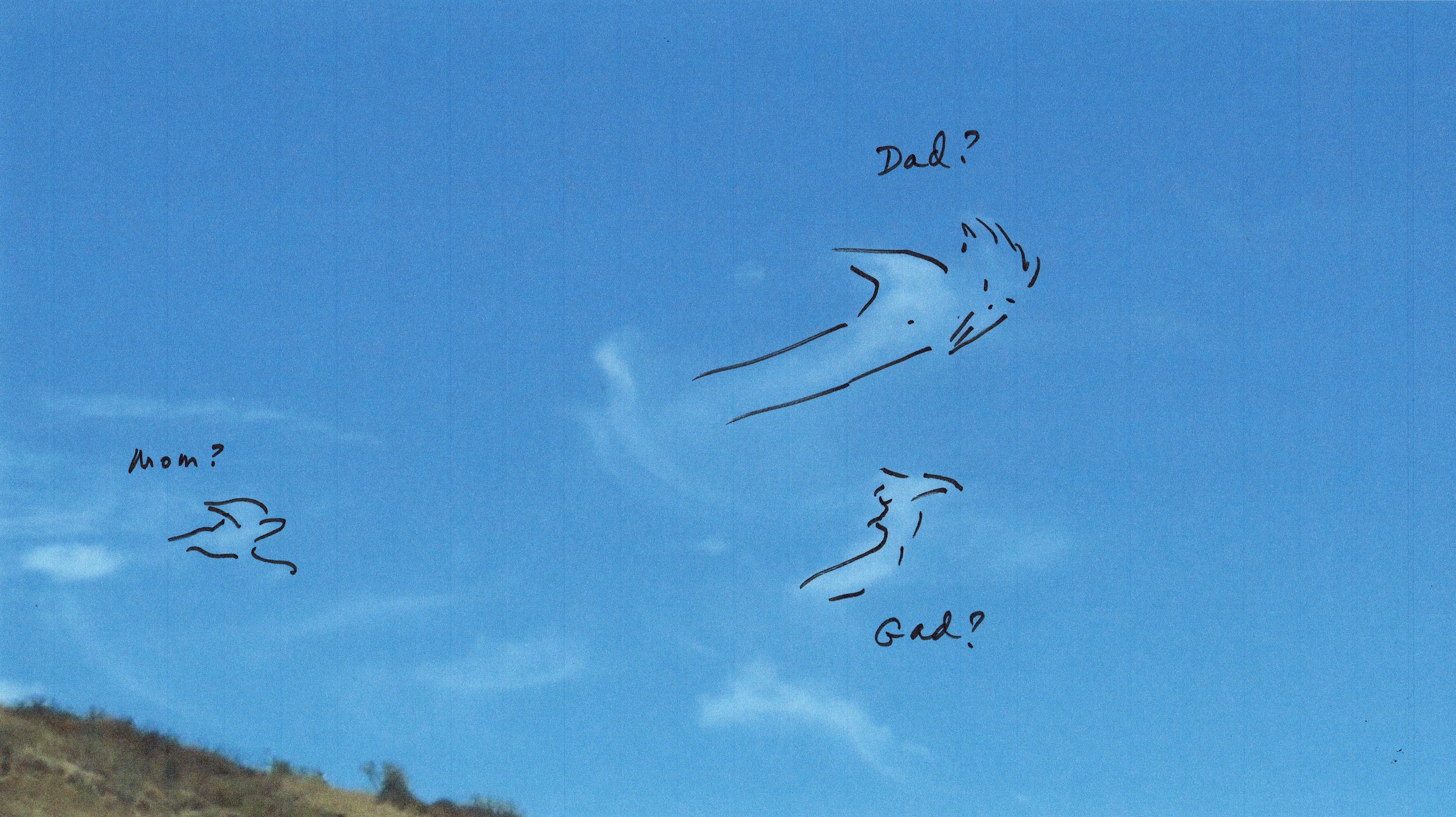 You know this cloud now looks a little like the child on the right, crying out when it sees its mom … and on the left, the mom turning around, as if she is searching around and about to see her son there … on the left at the top, see, with flowing hair, and her arms out? …

Here is another ghost story I heard while on the Serrano Valley walk … Link: “Serrano Homestead: An Apocryphal Ghost Story,” by Alice B. Clagett, filmed on 24 July 2019; published on 3 November 2019 … https://wp.me/p2Rkym-ePM ..