I have done some research because of the conflict between my clair intel on HIV / AIDS incidence and the US government and CDC (Centers for Disease Control) statistics, and have come up with some concerning results.

At the CDC Atlas I went to HIV diagnoses in the United States, at … http://gis.cdc.gov/grasp/nchhstpatlas/main.html?value=atlas … [As of 09/12/2019 this page is no longer applicable to the current discussion]

I clicked on the “View Counties” button. I noticed in the key at the top right that a white background with horizontal marks across it indicates counties where Data Are Suppressed (1) :

Image: Rate per 100,000 … horizontal hatching means ‘data suppressed’ … in “United States HIV Diagnoses 2014,” at the “CDC [Centers for Disease Control] Atlas” … http://gis.cdc.gov/grasp/nchhstpatlas/main.html?value=atlas … … [As of 09/12/2019 this page is no longer applicable to the current discussion]

Image: Rate per 100,000 … horizontal hatching means ‘data suppressed’ … in “United States HIV Diagnoses 2014,” at the “CDC [Centers for Disease Control] Atlas” … http://gis.cdc.gov/grasp/nchhstpatlas/main.html?value=atlas ... [As of 09/12/2019 this page is no longer applicable to the current discussion]

These areas appear as white on the following map (1)  … 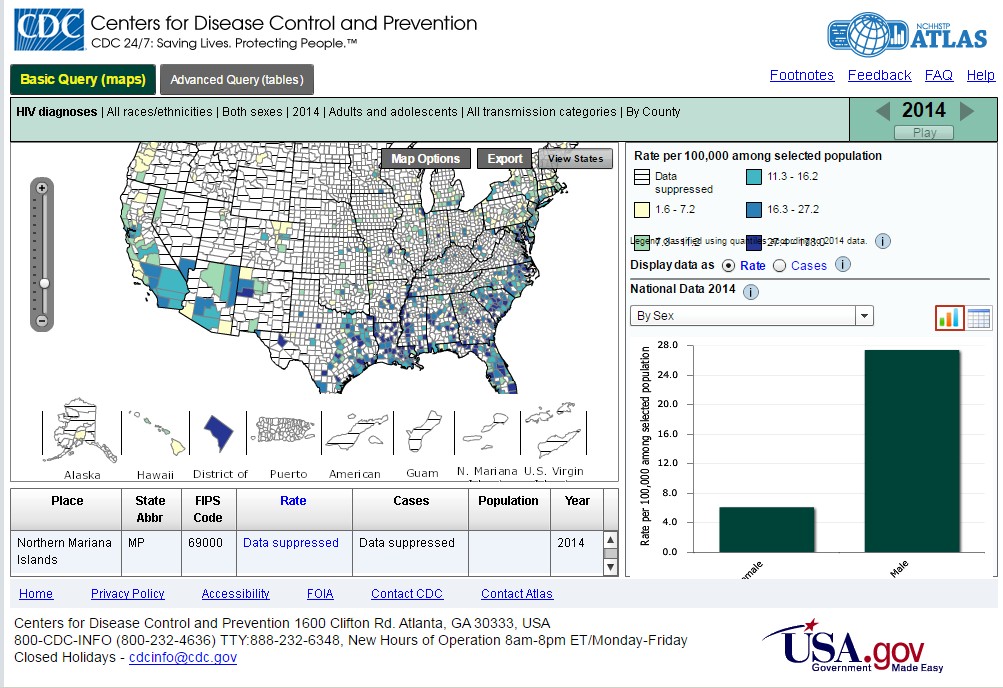 Map: “United States HIV Diagnoses 2014,” at the “CDC [Centers for Disease Control] Atlas” … http://gis.cdc.gov/grasp/nchhstpatlas/main.html?value=atlas … public domain … Shows many white geographic areas, indicating where data are suppressed … [As of 09/12/2019 this page is no longer applicable to the current discussion]

Map: “United States HIV Diagnoses 2014,” at the “CDC [Centers for Disease Control] Atlas” … http://gis.cdc.gov/grasp/nchhstpatlas/main.html?value=atlas … public domain … Shows many white geographic areas, indicating where data are suppressed … [As of 09/12/2019 this page is no longer applicable to the current discussion]

Thus it appears that data have been suppressed in almost all counties in the US States with the exception of about 2/3 of California and about 4/5 of Arizona. There is also a smattering of reporting along the Eastern Seaboard and the Gulf Coast.

In Alaska and the US Territories data have been suppressed. Hawaii is reporting.

Thus the reason for the optimistic outlook regarding HIV / AIDS in the United States. See …

… most likely has to do with suppression of data on a broad scale.

THE SITUATION IN OTHER COUNTRIES

From my reading, I have heard that HIV infection of United States women is underreported, apparently because US Medical Institutions do not consider women who are straight and in relationships with men to be at risk, and consequently do not provide testing.

I notice that Ora-Quick offers a $40 in-home HIV tests that is sold through major drug stores. This is touted as being as accurate as Medical Facility Tests. If true, this would be a way for women and children to ‘bridge the gap’ between the tests now provided through Medical Facilities and the reality of the situation at hand.

A WORD OF ENCOURAGEMENT

For those who are now diagnosed HIV-positive: Know that you are not alone. There are many, many who are diagnosed the same. It’s just that the figures are not out there; they are suppressed.

And too, those who have HIV / AIDS are laboring under more than the effects of this disease; an even greater burden is the negative opinion our friends and family may have of us if they find out, and the way people treat us when we apply for work.

Dear Ones, knowledge is power. If we know and understand what we’re up against as a nation, we will find the courage and hope to stand together in community and see this great nation through the coming difficult times.

(1) Copyright Status of Work by the U.S. Government. For the image that follows this footnote reference, since when I originally found the web page, it stated “U.S. Gov,” I am assuming that this public domain statement applies, although it is not expressly stated on the web page. Per Wikipedia: “A work of the United States government, as defined by the United States copyright law, is ‘a work prepared by an officer or employee” of the federal government“as part of that person’s official duties.’ [1] In general, under section 105 of the Copyright Act, [2] such works are not entitled to domestic copyright protection under U.S. law and are therefore in the public domain.” –from “Copyright Status of Works by the Federal Government of the United States,” in Wikipedia … https://en.wikipedia.org/wiki/Copyright_status_of_works_by_the_federal_government_of_the_United_States … Text is available under the Creative Commons Attribution-ShareAlike License ..

(2) On the Drug War and Prison Overcrowding. Our law enforcement officers are, I feel, doing their very best to deal with a difficult situation, considering the drug war and overcrowding in penal facilities.

In the longer run, I feel our nation will turn to making drugs legal, so that the tax on drug sales can be used for drug use education and rehabilitation. If the sale of drugs were legal, there would be less violence around this sector of the economy … as is the case with the sale of cigarettes and liquor. Thus the job of law enforcement would be less dangerous. It could also be that law enforcement might have an opportunity to assist with drug use education and rehabilitation.