Image: “The Seven Works of Charity,” by the Master of Alkmaar, 1504. At the Museum Boijmans Van Beuningen. From Wikimedia Commons … https://commons.wikimedia.org/wiki/File:Werken_van_Barmhartigheid,_Meester_van_Alkmaar_(1504).jpg … public domain

Image: “The Seven Works of Charity,” by the Master of Alkmaar, 1504. At the Museum Boijmans Van Beuningen. From Wikimedia Commons … https://commons.wikimedia.org/wiki/File:Werken_van_Barmhartigheid,_Meester_van_Alkmaar_(1504).jpg … public domain

It looks to me that United States government figures have been revised on HIV incidence in 2014.

A SURVEY OF THE 2014 HIV INCIDENCE DATA

The Deceptive Effect of Data ‘Smoothing’

Take a look at http://gis.cdc.gov/grasp/nchhstpatlas/main.html?value=atlas [broken link] … You will find yourself on the State View. This view smoothes out the data on all the counties in a state. Since many of the counties’ data are suppressed, the data on the State View are essentially a way to whitewash the facts; this smoothing technique is often used in statistical analysis to conceal an underlying problem.

Now click on the button “View Counties” … and you will get the county view. In that view, all the areas of the United States that appear to be white are areas where data on HIV incidence for 2014 have been suppressed. On the face of it, it would appear that the great majority of United States counties have declined to report their data. There also exists the possibility that their data have been suppressed at higher levels of government, and this ought to be looked into by the appropriate parties.

Thoughts on the Data that Have Not Been Suppressed: The East Coast, the Gulf Coast, and the Southwestern United States

A fair amount of counties on the East Coast, the Gulf Coast, and in the Southwestern United States offer data that has not been suppressed. To overcome the concealment effect of the State View smoothing factor, we can extrapolate for each of these areas on the basis of the reporting counties alone. In other words, we will not allow the ‘zero’ effect of the suppressed data to weight the data so that the pandemic appears to be less advanced than it truly is.

Note that the color keys for the State View and the County View have different HIV incidence values, as follows …

As I mentioned above: Since many of the counties’ data are suppressed, the data on the State View are essentially a way to whitewash the facts; this smoothing technique is sometimes used in statistical analysis to conceal an underlying problem.

By comparing the HIV incidence value ranges for the State View to those of the County View in the table above, the extent of this whitewashing becomes clear.

For instance, for the State View, the median value might be calculated as the average of the middle (medium bluegreen) value range. That, then, would be …

Then for the County View, the median value would be …

The highest value for 2014 HIV incidence is 66.9 for the State View (the default view) and 178.0 for the County View (which is the hidden, but clickable, view). For this highest value, then, one might calculate the whitewashing effect as follows:

Questions Regarding Tabulation of 2014 Data

Regarding these keys, I have the following questions:

An “HIV Surveillance Report:  Diagnoses of HIV Infection in the United States and Dependent Areas, 2013” is available online … http://www.cdc.gov/hiv/pdf/library/reports/surveillance/cdc-hiv-surveillance-report-vol-25.pdf ..

This report was prepared by the National Center for HIV / AIDS, Viral Hepatitis, STD, and TB Prevention, Division of HIV / AIDS Prevention, CDC. Since the CDC (Centers for Disease Control) is a public domain website, and the CDC is a federal agency, I’m assuming their work is in the public domain. 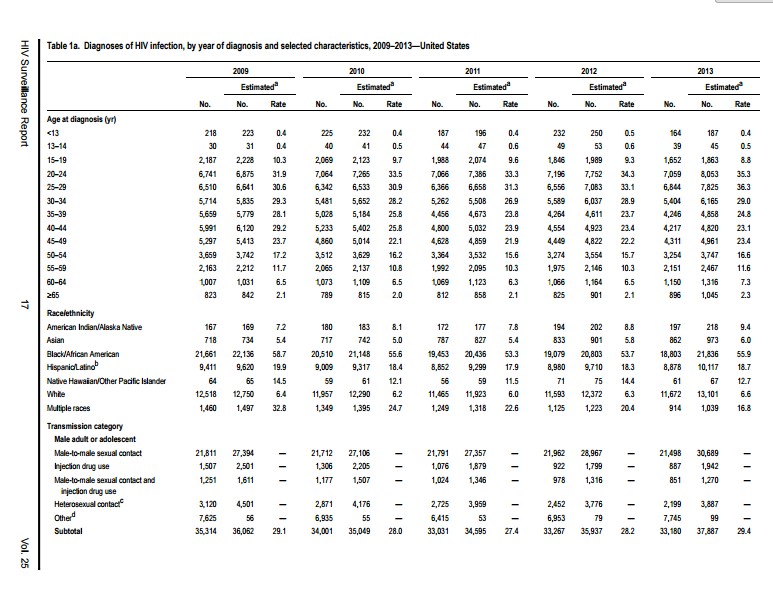 Here are the summary data from the table …

THE ACCELERATING COURSE OF PANDEMICS

The summary data in this table show an average baseline incidence per100,000 of about 14.7. This baseline effect is similar to the baseline of stock prices, which sets the stage for the subsequent rise in the stock price, as may be observed with the well-known Dow Jones Industrials, NASDAQ, and S&P 500,  stock charts … 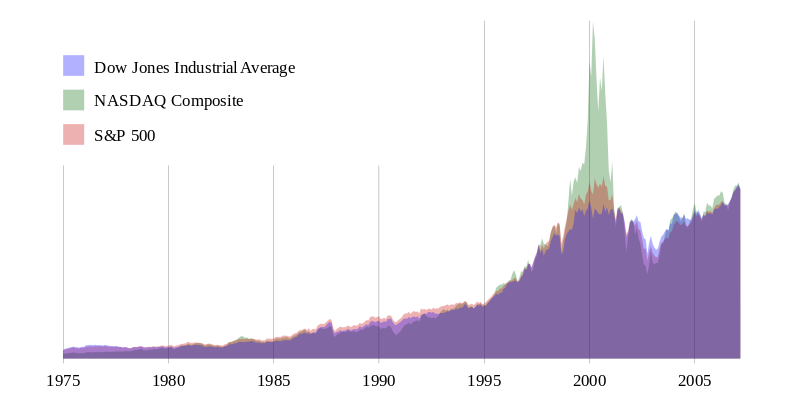 As can be seen from the above chart …

The course of pandemics is similar to the above chart. There is a baseline or momentum building effect, as was the case with the CDC data for 2009 to 2013.

Then follows the beginning of an acceleration of incidence, such as might follow from my extrapolations on HIV incidence in the section of this blog that you are about to read.

After that there is an accelerated phase of the pandemic, during which time it would be good to already have in place the community support measures I propose in the final section of this blog, the “Guidelines for Community Preparation for the HIV Pandemic.”

Extrapolating for the East Coast, the Gulf Coast, and California on the basis of the reporting counties in the County View of this map … http://gis.cdc.gov/grasp/nchhstpatlas/main.html?value=atlas [broken link] …

An estimated incidence of 27.4 per 100,000, which would be the border line between these two categories, would be a conservative estimate for these regions for 2014.

I calculate the 2015 incidence as double the 2014 incidence, based on my feeling that we are currently in the moderate acceleration phase of the typical bell curve of an epidemic (as mentioned above, with the stock graph. For more on the bell curve, see “For More Information” below.)

GUIDELINES FOR COMMUNITY PREPARATION FOR THE HIV PANDEMIC

Through schools, churches, social clubs such as Rotary and Lions Club, and in our immediate families, let us talk together about the current situation, and devise good strategies to meet the needs of our communities.

Let us make home means of testing for HIV readily available across demographics. I note that HIV tests are available in drugs stores such as Rite Aid for about $40.00. I suggest this alternative because of the social stigma connected with the HIV and AIDS ‘labels’.

It seems likely that statistics for women and children are greatly underestimated, as these groups until now have been considered as not being at risk. As this pandemic has begun to accelerate, such assumptions are not tenable. Women and children ought also be advised of risk, of testing procedures, and of treatment methods and prognoses, both traditional and alternative.

It seems likely, as the epidemic progresses, that traditional medical facilities will be overstretched. Let us look into the existence of, and efficacy of alternative medical techniques such as homeopathy, healing tinctures and crystals, and energy rebalancing techniques, as well as alternative ways to bolster the immune system, such as healing foods and yoga.

Let us look to our schools and churches as possible places where care may be provided if hospitals should be overstretched. Making plans for such an eventuality, even though it most likely will not occur, will ease the minds of everyone in our communities, I feel.

With a better understanding of the course of epidemics (see “For More Information,” below) it becomes clear that the survival of human beings with resistance to the infecting agent is the key to the survival of the human race. Thus it becomes important to keep our HIV-infected populace … including HIV-infected newborns … alive and well cared for. Among them will be the resistant strain of humankind that lives on into the future and preserves our species, as was the case with the deadly influenza epidemic of the early 1900s.

Let us look with an open heart to everyone whose immune system has been weakened by the HIV virus. Let us understand that this is no longer a disease affecting only men who have intercourse with men, or people who use intravenous recreational drugs. Straight families will be equally affected … men, women and children across the board, all over America. Let us lift the HIV social stigma, so that we can talk with each other about the times of tribulation we are now facing.

Let us stand with Christ in these times. Let us look to the work of feeding the hungry, giving drink to the thirsty, clothing the naked, sheltering the homeless, visiting those in prison, and burying the dead. (For more on the Corporal Works of Mercy, see Link: “Part 10: The Corporal Works of Mercy,” in The Divine Mercy …  http://www.thedivinemercy.org/library/article.php?NID=3479 ..)

Let us stand as people of faith, hand in hand with the people of all faiths. Let us do what we can for all peoples everywhere, as this is a time of tribulation that crosses all borders and affects all nations, all races, and all cultures. Let us stand together, with and for each other, in the highest love and Light. Let us persevere through faith, in compassionate love, and in hope of a better tomorrow for all humankind.

The last section of the above blog has been excerpted to … Link: “Guidelines for Community Preparation for the HIV Pandemic,” by Alice B. Clagett, excerpted from a blog published on 5 July 2016 and republished on 3 April 2017 … https://wp.me/p2Rkym-hiC ..