Written and published on 3 November 2018

This is about nearby solar systems, about the Sirian colonization of Venus, and about the Hathors That Have Befriended Earth and humankind …

According to Wikipedia, “There are 52 stellar systems beyond our own Solar system that currently lie within 5.0 parsecs (16.3 light-years) of the Sun. These systems contain a total of 63 stars, of which 50 are red dwarfs, by far the most common type of star in the Milky Way. Much more massive stars, such as our own, make up the remaining 13.” –from Link: “List of nearest stars and brown dwarfs,” in Wikipedia …  https://en.wikipedia.org/wiki/List_of_nearest_stars_and_brown_dwarfs ..

In the 52 star systems closest to our Sun (within 5 parsecs of our Sun) there are 13 stars similar to our own. Reading down further in the Wikipedia article, I find that there are 10 stars visible to the naked eye; in the list of these, below, I have added channeled intel, where available, in green font …

Within 5.0 parsecs of our Sun, there are 50 dwarf red stars. Then there are dwarves smaller than suns: 11 brown dwarves, and 4 white dwarves.

It is possible that these dwarves are influencing our Solar System in an astrological sense. I hope to find out more about this.

COLONIZATION OF OUR SOLAR SYSTEM BY SYRIUS

Thus, according to my intuition, there is a line of star race knowledge from Syrius to Venus to the Hathors of Earth’s Solar Astral Planes to the Ra and Ra-En delegations to the highest astral planes of Earth, and from thence to the star knowledge imparted to Earth through Hathor visions and visitations on planes fourth dimensional and higher.

ON HATHOR VISITS TO EARTH

Some of these visits are documented by me and other Ascension workers. For instance …

Tom Kenyon speaks of the Hathors as both interdimensional and intergalactic … Link: “Who Are the Hathors,” by Tom Kenyon … https://tomkenyon.com/who-are-the-hathors ..

Peggy Black, in her “Morning Messages” … https://www.peggyblack.com/morning-messages … talks quite frequently about her Hathor Ascension team, which, through its loving and wise advice, helps her through the vicissitudes of life on Earth.

And I and another human observer spoke and/or interacted with a Ra delegation a few years back, a portion of which is documented here …

Other visits by Ra to Earth have been documented in “Law of One: The Ra Material,” as follows …

The Ra delegation, from amongst the ascended beings of Venus, also intervened in Ancient Egypt. It is through their intervention that Pharaoh Akehnaten proclaimed a ‘Law of One’ during his reign …

Long-Necks: Akhenaten, Nefertiti, and Their Daughters

The Egyptian pharaoh Akhenaten and his Royal Wife Nefertiti were long-necked, and they were influenced by Ra.

Thus I gather they may have been Nephilim, descended from Anakim (singular ‘Anak’). (1) It is possible that the ‘Anak’ gene strand had greater cognitive capability than other humans of that era, That might make them more respected as leaders of Egypt … natural choices for leadership, I suppose. It would also make them able to appreciate the wisdom of the ascended Venutians …

Image: “A colossal statue of Akhenaten from his Aten Temple at Karnak. Egyptian Museum of Cairo,” in Wikimedia Commons … https://commons.wikimedia.org/wiki/File:GD-EG-Caire-Mus%C3%A9e061.JPG ..

Image: “A house altar showing Akhenaten, Nefertiti and three of their daughters. 18th dynasty, reign of Akhenaten,” circa -1340, from Wikimedia Commons … https://commons.wikimedia.org/wiki/File:Akhenaten,_Nefertiti_and_their_children.jpg …

Thoughts on the House Altar of the Royal Family

Rays of Sunlight Ending in Ankhs. I note the rays of sunlight, some of which end in ankhs … 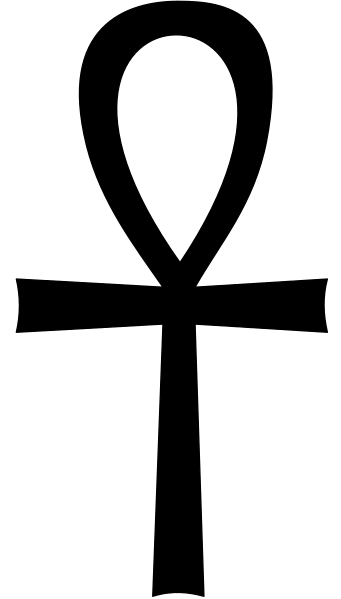 The Ankh is an Ancient Egyptian symbol meaning ‘life’, So certain rays of the Sun (2 such rays for each parent) are giving life to Akhenaten and Nefertiti.

The Kiss? I note also, in the House Altar of the Royal Family, that Akhenaten is holding one daughter up to his lips; her lips are next to his. This might be considered, in a modern connotation, a kiss, a gesture of endearment.

My own thoughts about this gesture are two …

Breath of Life or Healing? First, it could be that the Sun is giving the Ankh, the life, to Akhenaten, and he is breathing the life into his daughter. Perhaps she is ill, and he is healing her.

History of a Star Race? As well, it could be that the Sun is imparting knowledge of the racial history of the star beings from whom Akhenaten and Nefertiti are descended, through the blessing of the Ankh, to Akhenaten, and that he is breathing that knowledge … possibly through telepathy … into his daughter.

Thoth and the Christian Faith: The Cross Within a Circle. For more on the Ankh symbol, and its relationship to the cross within a circle spoken of in The Emerald Tablets of Thoth, see …

WHAT CLIMES THE HATHORS FIND HOSPITABLE

“The Law of One” states that current conditions on Venus are hospitable for those beings in the fifth dimension in the sixth dimension, but not for beings in the third dimension … Link: “Law of One: The Ra Material,” Question-Answer 6.6 … https://www.lawofone.info/results.php?s=6#6 ..

According to Wikipedia, “The atmosphere of Venus is the layer of gases surrounding Venus. It is composed primarily of carbon dioxide and is much denser and hotter than that of Earth. The temperature at the surface is 740 K [Kelvin] (467 °C, 872 °F), and the pressure is 93 bar (9.3 MPa), roughly the pressure found 900 m (3,000 ft) underwater on Earth …” –from Link: “Atmosphere of Venus” in Wikipedia … https://en.wikipedia.org/wiki/Atmosphere_of_Venus ..

Again according to Wikipedia, the temperature of our Sun’s corona … which extends millions of kilometers out into space, is about 5  X 10

to the sixth degrees Kelvin –from Link: “Sun,” in Wikipedia …  https://en.wikipedia.org/wiki/Sun ..

It seems to me probable, then, that the Hathor delegation to Earth has found a comfortable place to abide within our Sun’s outer corona, which simulates conditions on Venus … or else from which they can ping or bounce blessings from residents of Venus to human beings on Earth.

The Borderline Between Earth’s Thermosphere and the Exosphere ,,, Perhaps During Impact on Earth of Coronal Mass Ejections

Gathering from my own experience, sometimes smaller delegations (Ra-En) find a way into the area between Earth’s thermosphere and the exosphere, for observation, in hopes of increasing their ability to assist young star races in the ascension process.

Intuition tells me this area of Earth’s atmosphere may be visitable by a Hathor delegation during impact on Earth of Coronal Mass Ejections.

Stories by Alice: Human Heart (for a Brief Vacation)

My own experience of a small group of Hathors winging their joyful way through my heart chakra makes me feel that the human heart is also a viable ‘vacation spot’ for this loving, joy-filled star race.

Once again, intuition tells me that our human hearts may be visitable by a Hathor delegation during impact on Earth of Coronal Mass Ejections, especially X-flares, and most particularly when several volleys of X-flares take place within a few days of each other, setting our magnetsphere humming and thrumming with Solar energy.

DEPICTIONS OF THE GODDESS HATHOR IN ANCIENT EGYPT

From the many depictions of the goddess Hathor in Ancient Egypt, it is clear that the Hathors were visitors there. Here is one such depiction …

Star Symbolism of Sun With Horns of Hathor

I note, in this image, the horns of Hathor are holding an image of the Sun. Since our Sun is one of many stars, and since the horns represent the milk-giving, cow aspect of Hathor,  to me this means that the Hathors hold the star knowledge that nourishes humankind. I note that Hathor’s long neck is not shown here … perhaps that detail was lost in the winds of time …

The globe within the horns over Hathor’s head might also symbolize the Eighth Chakra, gateway to knowledge of the stars, that has, since the 2012 Shift, become activated in human beings.

(1) “Anak … is a figure in the Hebrew Bible in the conquest of Canaan by the Israelites who, according to the Book of Numbers, was a forefather of the Anakim … (Heb. Anakim) who have been considered “strong and tall,” they were also said to have been a mixed race of giant people, descendants of the Nephilim (Numbers 13:33). The use of the word ‘nephilim’ in this verse describes a crossbreed of God’s sons and the daughters of man, as cited in (Genesis 6:1-2) and (Genesis 6:4). The text states that Anak was a Rephaite (Deuteronomy 2:11) and a son of Arba (Joshua 15:13). Etymologically, Anak means [long] neck….” –from Link: “Anak,” Wikipedia …  https://en.wikipedia.org/wiki/Anak … CC-BY-SA 3.0