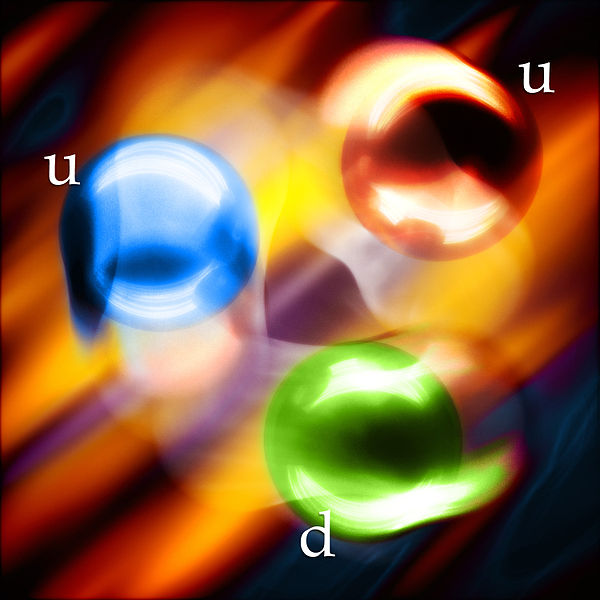 Image: “Two up quarks and one down quark spinning freely in a particle accelerators stream,” by Brianzero, 1 March 2009, in Wikimedia Commons … https://commons.wikimedia.org/wiki/File:Quark_wiki.jpg … CC BY-SA 3.0 Unported … COMMENTS: I read that protons and neutrons are made up of quarks; so protonfall might be full of quarks. So it seems to me. –Alice B. Clagett

According to Space Weather … www.spaceweather.com … protonfall is now about 6,800, which is high considering what protonfall has been like most of the time in recent years.

END_OF_DOCUMENT_TOKEN_TO_BE_REPLACED

Here are some stories about a time slip in a car wash, very speedy time, fractal incarnations, and the Souls of our dearly departed. There is an edited Summary after the video …

On a beautiful day in late December at Sage Ranch. And I thought I would talk to you today about something a little bit mysterious that happened to me at the car wash on Sunday. I went in to pay the money for the car wash in the machine, and there was another car in front of me. It was a van, and it went into the car wash.

But I could see what was going on because there was one of those circular mirrors … the curved mirrors that show things that are going on. I saw that the car finished with the car wash. And then the car started to get smaller, in the mirror, as it moved out of the car wash.

I do not really have an explanation for that, because I saw the van leaving. I just do not know what to say about it. So I waited again for the wash cycle to complete itself, and the van left, and then I went into the car wash, and I was able to get my car washed successfully.

I wonder what is going on with time these days … You know, I have noticed it speeding up. I have noticed how few things I can get done in a day, even though I am very industrious. And my sense of time has changed. It is like time seems to be moving just very, very fast.

And so, I get up in the morning, and I do the thing that seems the most important, and the most fun to do that day. And since the day seems to last for such a short length of time, I congratulate myself, at the end of the day, that I have achieved that one thing … and maybe a few other things too.

I do not know if you have been noticing these strange things about time: Temporal slips, or slides … something like that. And there is a second thing that is going on. It has to do with the fourth dimension.

On Fractals Peeling Off the Current Timeline: Timeline Splits

Timeline Splits: Story About the Person Who Wanted to Play Kirtan His Whole Life Long

I recall an instance of a timeline split that I heard about clairaudiently: One day, the Soul was hovering over, around me, and some portion of the Soul just decided it had had enough of waiting around. And it went, as a separate incarnation, off to India to play kirtan its whole lifetime. And that was very odd, because the original person is still alive. Almost unbelievable, really.

Timeline Splits: Story About the Man Who, for Love of a Woman, Fractalized as Her Newborn Child

I had another instance with a person, where they really loved a woman from whom they were divorced; they loved that woman so much, that a portion of their Soul … I think they call it a fractal … peeled off from their Soul, and decided to move into an alternate lifetime, where that woman was married to someone new, and was ready to conceive a baby. And that Soul decided to take the responsibility of being her son.

And I even saw a fast forward, where the baby was born, and it was still aware of its current lifetime, and it was, for the first month, struggling to fit into the scenario of the husband and the mother that had previously been its spouse.

But then, at the end of that time, it mercifully forgot all that, and it sank into the role that it had chosen for itself: To be very close to the woman it had loved, in a childish fashion. It was very unusual. And kind of cool, that we are in a situation right now where we can, apparently, speed up karma. We can actually actualize our many desires for ourselves in many different directions, simultaneous with our current incarnation.

I do not believe I have heard anyone talking about that, but apparently it is true. It is possible. And it is kind of cool.

I have one other thing to talk about the fourth dimension right now, and that is, it seems to me … what with the recent ‘particle stew’ … that is, high protonfall (1) … and a solar flare, even though it was a small solar flare …

Apparently, the Sun is a multidimensional being … like us … only much greater, of course, and much more responsible for a lot of stuff. But, when the Sun has a solar flare, my feeling is that the flare affects Earth on many different dimensions too. And so, in addition to affecting our physical bodies in the third dimension, it is also affecting our emotional and mental world …. our astral world, the fourth dimension …

And it affects those Souls that are currently in the fourth dimension; our dear ones, who have passed on. It affects them too. And perhaps more directly. And helps them prepare for Ascension. But while it is doing that … because Souls are very often in a not-too-sentient state … kind of shell shocked, or kind of hiding, when they are in the fourth dimension. For a long time, they may just hang out, in a semi-sentient state.

On Sensing Ghosts as Pressure Around the Head, and Blessing Them, So They Can Feel Safe

So their fears can be roused by these changes in the electromagnetics of Earth, just like ours can. And today I have noticed a pressure around my head, and a feeling that there are many Souls that are seeking refuge around me.

So the minute I noticed this ‘congestion’ around my head, I just wished them all speedily off … That they should find their path, and find their guides right away, and that the Divine should help them, right away, to find a safe path to their destiny, as Souls. And the minute I said that, they all cleared out, and they were pretty joyful about it.

I did hear a few little voices … wistful voices: Are you sure it is safe out here? And that kind of voice. And I just reassured everybody that it was perfectly safe. You cannot be more safe, than under the protection, and in the care, of the Divine.

So, those are my experiences, recently, with regard to the changes around Earth, and on Earth. And I realize it is a lot to hear, even on a sunny day. So, if I have aroused your incredulity, please pardon me. [laughs]

I hope you have a wonderful, sunshiny day. talk to you later.

Except where otherwise noted, this work is licensed under a Creative Commons Attribution-ShareAlike 4.0 International License.
…………………………………………………….