Here is a video about a very vivid Package Dream I had about two months ago. I have put off publishing it because I feel that my explication could use improvement. Finally I decided to just go ahead and release it. Here goes: First the dream, then the video, then an edited Summary of the video … 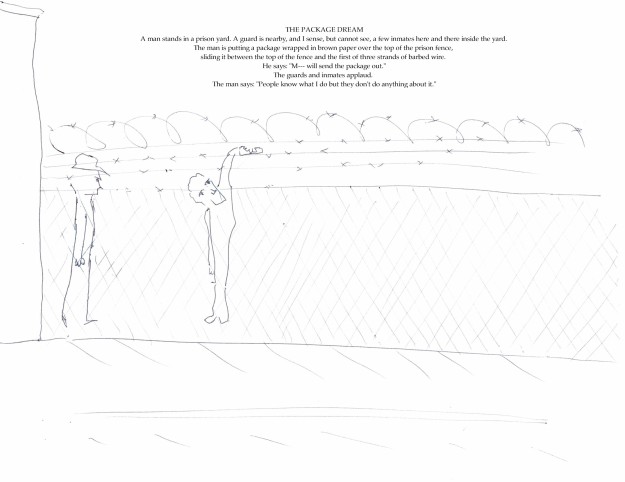 Image: “Package Dream,” by Alice B. Clagett, 16 May 2018, CC BY-SA 4.0, from “Awakening with Planet Earth,” https://awakeningwithplanetearth.com … LEGEND: THE PACKAGE DREAM: A man stands in a prison yard. A guard is nearby, and I sense, but cannot see, a few inmates here and there inside the yard. The man is putting a package wrapped in brown paper over the top of the prison fence, sliding it between the top of the fence and the first of three strands of barbed wire. He says: “M— will send the package out.” The guards and inmates applaud. The man says: “People know what I do but they don’t do anything about it.”

LEGEND: THE PACKAGE DREAM: A man stands in a prison yard. A guard is nearby, and I sense, but cannot see, a few inmates here and there inside the yard. The man is putting a package wrapped in brown paper over the top of the prison fence, sliding it between the top of the fence and the first of three strands of barbed wire. He says: “M— will send the package out.” The guards and inmates applaud. The man says: “People know what I do but they don’t do anything about it.”

A man stands in a prison yard … A guard is nearby, and I sense, but cannot see, a few inmates here and there inside the yard.

In front of the man is a 5-foot fence, and above it. three rows of barbed wire. He has a package maybe 8 inches by 12 inches by 2 inches, wrapped in brown paper and sealed up with tape. He is inserting the 8 inch x 2 inch edge of the package through the fence above the top of the fence and below the lowest strand of barbed wire.

He says: M— will send the package out.

The guards and inmates applaud.

The man says: People know what I do but they don’t do anything about it.

Public Humiliation as a Way of Making Up for a Capital Offense?

Let’s say that there were a case where a person was using a starring role in a movie to offer penance for having done serial killing. Now that is a very interesting thought process: That by playing the role, in front of the public, or in front of other people, of having been that, they are absolved of that.

It reminds me of a case (an astral story; ‘psy in the sky’) I ran into some years ago, where a person murdered a woman for money for the group that they were in, and then went to the person in charge of that group and said: Look what I’ve done.

As penance, that person assigned that they should publish a biography or curriculum vitae online, that indicated they were looking for a job as an Assassin. So Assassin was indicated as their career choice. The person in charge said that they had to leave that online for a month, as penance.

What is that? Public humiliation as a way of making up for a capital offense?  I cannot figure it out. But I know it means something very important, in terms of antisocial personality syndrome. Maybe later it will come to me.

Using A Symbolic Object or Action to Represent Having Sexual  Intercourse

Then though, I think it has something to do with deeply repressed sexual desire in some people who exhibit antisocial personality disorder … and how they sometimes use symbols to represent, for instance, their phallus … and then insert this symbolic phallus … a ‘foreign object’ into somebody else, because they consider sexuality to be beneath them, or bad. Yet they have the drive to express themselves sexually. And so a way of wussing around the situation is to symbolically perform the act.

I do not know how that is explained in psychology, but I feel it has to do with subconscious symbolism based on a metaphor or figure of speech. An applicable figure of speech might be: I’ll die of embarrassment if people find out!

Along similar lines, a dream I had about an astral figure putting a boot in my abdomen might mean to my subconscious mind that he is “giving me the boot.’

ASPs as ‘Flow-Throughs’ for the Collective Unconscious

I will tell you another thing that happened on the astral plane, that had to do with voodoo, and voodoo dolls. I feel the notion of voodoo has a deep subconscious basis; it represents a principle of the deep subconscious mind.

Voodoo practitioners feel that they can put pins in a voodoo doll, and that will adversely affect the health of the person that the doll represents. Taking this one step further, antisocial personalities sometimes apparently degrade the astral matter of a person to the point where the person is very susceptible to mind control. The mind control ability that the antisocial personality feels derives from his conscious perception of the Collective Unconscious flowing through him. The ASP is consciously aware of the Collective Unconscious because his point of awareness within his Higher Mental Body is the primitive reptilian portion of the mental body in the center of the head …

Link: “Reptilian Strands Resolving in the Noosphere,” by Alice B. Clagett, written and published on 4 December 2017 … https://wp.me/p2Rkym-7Yg ..

The antisocial personality or ASP feels the Collective Unconscious … or Unconscious Thought Cloud of the World … flowing through his mind, and into the mind of the person that is mind controlled. Therefore the latter’s astral matter is degraded, and their Soul begins to receive Soul wounding.

Then, instinctively, the antisocial personality uses to his own advantage these people who have been mind controlled. For more on this, see my Spiritual Adept Short-Cuts blog series …

These people that have been degraded, or made into ‘donkeys’ carrying the dark energies … or ‘donkified’, you could say … are a little like voodoo dolls … only they are alive. In other words, they are victims of voodoo who can be used to transport the dark energies of the antisocial personality into other people in the world.

They could,for instance, be his arms and legs, if he is bound down, for some reason, in a particular locale; say, in jail.

So then now, back to other forms of symbolic passing on of energy. It seems to me like the antisocial personality may feel that all the objects and people in the world are like but tools through which his energy passes, altering the world that he sees.

So for instance, if he were to get a ‘donkified’ person … or ‘voodoo-ized’ person … an ‘undead’ person … to perform in a movie that represented evil, such as serial killing, then that would be, to his mind perhaps a flowing through of what he might consider himself to be himself … the Collective Unconscious or Collective Subconscious.

………………..
Sidebar: ‘Normalization’ of Paraphilia on the Silver Screen

The 2018 movie “Bad Samaritan” is about a serial killer who is a bondage and discipline (B/D) antisocial personality. From the antisocial stance, it seems to me this movie might be seen as an attempt to win over the ‘normal’ public to the notion of paraphilia or sexual deviation, by presenting the joy the serial killer gets in performing ritual acts of B/D, yet at the same time ‘softening’ the ending by allowing the ‘normal’, the hero, to reverse the roles and perform B/D upon the serial killer.

The feel of the “Bad Samaritan” movie, to my perception, is like that of the 2018 movie “Tag” which popularizes the prison game of ‘rape tag’ by ‘softening’ it so that it appears to be a socially acceptable game of male bonding.

From an intuitive stance, I feel it possible that many movies have been made in the last 20 years that represent the antisocial point of view. As to whether the entertainment industry is being influenced by ASPs through mind control, or whether the problem may lie nearer to home, I cannot say.

It is because of the antisocial tenor of many modern offerings on the silver screen that I feel very strongly the importance to the Lightworker of grounding in the real world rather than in the world of virtual fantasy.

The ASP might identify with the subconscious or unconscious energies of the noosphere in a state of Ego … a state of not recognizing the individuality of anything but himself … this energy flowing out of him, through another person that he considers to be a ‘thing’, or an animal, or an object; and then from that person, who is being represented on the silver screen, that would then affect and ‘donkify’ other people … maybe millions of people … maybe the entire world … in the image he has of himself as, say, Satan incarnate.

This way of looking at people as ‘voodoo dolls’ through which he can manipulate the hologram is a hallmark of the mind of the antisocial personality. I recall my mother used to term it ‘megalomania’ or as having ‘delusions of grandeur’. She had a ‘bounce back’ way of looking at people like that, as if they had no relation to her, and could not harm her. I feel hers was a healthy way of seeing the issue, from the point of view of psychology.