This video is about co-creating reality, our holograms, cause and effect, cutting astral cords, ‘de-grouping’, synchronistic reality, fear-based vs love-based reality, transforming reality, Ascension guides, walking with the Divine, and New Earth. Gosh, that is quite a lot for a short video!

I am standing under another sacred juniper tree, in the shade of the afternoon Sun. And I had something empowering to talk about briefly. It is about co-creation of reality, and holograms, and cause and effect, and synchronistic reality.

The thing of it is, I am discovering, I have my hologram, my personal hologram. And all of the Ascension guides, and higher Spirits … They are all helping me to create New Earth, through my imagination, through my visualization, and through my hologram.

Now, this hologram of mine is susceptible to mental thought … which is a cause-and-effect kind of way of thinking … linear thinking. So when my neural net starts in with some fear-based reality, which is very far from true reality, my hologram can reflect that kind of fear-based feeling.

But it is completely up to me … What I want in my hologram is kind of up to me. You know? Depending on the state of my heart and my emotion.

So, if I find myself … as I did today … with some kind of fear-based feeling, all I really have to do is say to myself that I want to change, and transform my personal hologram. I don’t have to think of it in terms of affecting anyone else. Because all the holograms of all of the human beings are synchronistic; not really cause-and-effect.

They can be viewed as cause-and-effect, but they are … in a higher sense … synchronistic.

So the holograms of every other person theoretically involved in my reality, are unaffected by my personal transformation of my hologram. They may adjust in some way, because of their own co-creative ability, you know?

Immediacy of the Act of Co-Creating Reality Through Imagination

So basically, all I really have to do is visualize and imagine a higher reality … one based on love. And then, my own personal scenery … which, in this case, is quite beautiful … 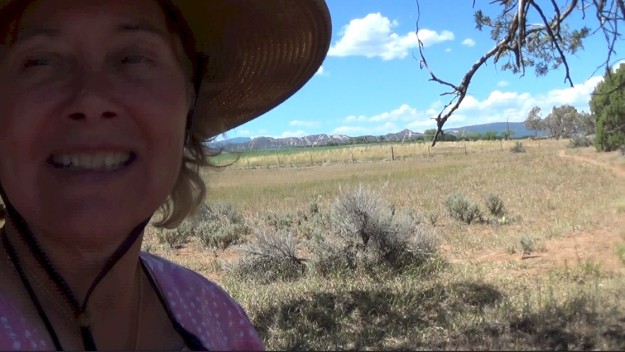 … and my mental imaginings, become more in sync with the true reality, which is Light and Love, peace, wisdom, and all of that, right?

On Getting Carried Away by a Train of Thought

So, I do not want to get on the train of my mind, and start into some distant territory that is far from true, and think that people have some influence over me … which they do not.

Advaita … At the Heart of Reality

I myself am True Source. And it is ok to be like that.

On Cutting Cords and Escaping from Identifying with Groups

It is a hard thing, cutting psychic cords, and realizing that we are not a group of people. We might find ourselves with a group; but we are not really that group. We are really in relationship, in this hologram, with Source, or with the Divine.

So that group thing … that feeling of togetherness with the group … is like a very small version of being one with the All, and with Source. It is like when you are very small, and your folks buy your first bicycle, and it has those trainer wheels on it … Those little trainer wheels to help you get your balance, and figure out what is going on.

Groups as ‘Trainer Wheels’ for the Bike Ride Named ‘The All’

So right now, that is what is really happening. We have our trainer wheels … which are the groups that we belong to, and our families, but the true bike ride is relating to All that is … the Infinite.

A Train of Clouds

That is really all that I have to say, but I want to try and show you a picture of a train of clouds … which seems to me a better thing to envision than a train of thought …

… Here it is, like a train of thought … going, who knows where? Where is the beginning, and where is the end? It is heading in this direction, but I do not know where it is going to end up … the train of clouds.