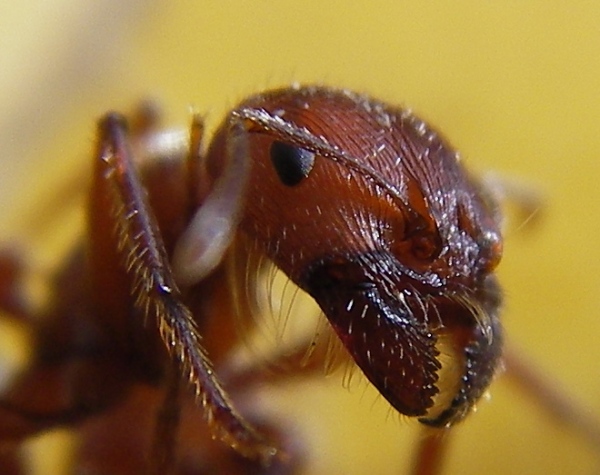 Image:  “The head of an ant seen very close up,” by Steve Jurvetson, 27 November 2005, from https://www.flickr.com/photos/jurvetson/70704300 … at “File:Ant head closeup.jpg” in Wikimedia Commons, CC BY 2.0 Generic … DESCRIPTION: The ant was the bane of the Ancient Ones, the Martian pioneers of planet Earth … the people from whom the Elder Race of Earth bacteria derived.

For those that are into the science fiction story about the Martian bacteria that colonize the human gastrointestinal tract … In my version of the story, there are ‘good’ and ‘bad’ Martians, which is to say, those who are of service to the All, and those who are service to self. We humans can expect fruitful cooperative alliances with the former, whereas through diet and appropriate eliminative techniques, we may hope to optimize the numbers of the latter that occupy the ‘space stations’ that we call our physical bodies.

HISTORY OF MARTIANS ON EARTH: THE ANCIENT ONES

My understanding is that the bacteria we find out on their own in the world, which do not form colonies such as those found within mammals, are the ‘Ancient Ones’ of the Martian species collectively termed, here on Earth, ‘the Elder Race’.

The Ancient Ones of these peoples were here on Earth before humankind, and were subject to the perils of predation by insects, spiders, and other beings. Thus the advisability of finding a safer ecological niche, such as within a mammalian gastrointestinal tract, circulatory system (whether blood of lymph), or in some cases less beneficial to the mammal, the muscle or nervous system.

In the view of the colonists, the Ancient Ones are the pioneers, the very brave ones, whose existence might be cut off at any time by one slash of the razor-sharp mandibles of that fierce and loathsome being, the Ant. To be truthful, up close and personal, I see ants in the same light.

Image: Jaws of an Ant … https://photos.smugmug.com/Ants/Taxonomic-List-of-Ant-Genera/Camponotus/i-T8nzJ22/2/L/castaneus2-L.jpg ..

To a Martian bacterium, an ant must represent a threat a little like this …

Or, considering the size factor, the threat may be more like this …

Humankind, being so very large compared to bacteria, might well be considered a capacious, hospitable home to them, a refuge from the rapacious terrors of the world at large. When you think about it from the point of view of a bacterium, one gulp by any number of beings inside whom life is impossible or improbable, or one spring shower, or a too-warm day in the desert, might be the end of one family line. Here is more about this …

HISTORY OF MARTIANS ON EARTH: THE COLONISTS OF HUMAN ‘SPACE STATIONS’

For those Martian colonies that have established ‘space stations’ on human beings’ bodies, perils are predictable. Daily elimination culls many members of their colonies. Lack of bonding with individuals, together with quick formation of deep friendships, makes up for this. In addition, there is a social memory complex …

… just as there is for humankind.

In an attempt to understand the complex adaptive behaviors of ants and bees, our science calls this animal instinct. But in the case of the Martian bacterial colonies in humans, it is much more than this. For these colonies, bathed as they are in the astral matter of humankind, have developed, in sync with us, a greater notion of the All, which is imprinted in their social-memory-complex.

Though they may live for only a few days, individually, our Martian allies are born with the totality of memories of their kind, which is to say, they are able to tap into a vast body of knowledge; greater than that available to humans who have not yet attained cosmic mind. In this they are like our Neanderthal relatives, who were described in the first of the “Ayla (Earth’s Children)” book series. For those who are unfamiliar with this book series, Ayla was a Cro-Magnon woman who was raised by Neanderthals. See Link: “Ayla (Earth’s Children)” in Wikipedia … https://en.wikipedia.org/wiki/Ayla_(Earth’s_Children) ..

In a physical sense, this instantaneous continuity of social memory might be explained thus: As bacteria reproduce asexually, through a fission (cloning) process, the offspring has the same DNA as the parent …

Thus, why might it not have the same social memory as the parent? Might not parent and child, having the same genetic makeup exactly, be considered the same organism?

Thus, for a highly advanced species of Martians, who serve the All, and colonize the human gastrointestinal tract as benevolent allies of the human body, the daily loss of many members of the colony through the process of elimination might be held philosophically as the loss of some portion of one’s ‘other selves’, these being also oneself, who remains alive.

Human Sexual Dimorphism Leads Us to Forget the All

In this sense, the human differentiation into sexual dimorphism might be seen as a digression or dissimulation that leads our species astray from the truth of the All. Benevolent Martian bacteria might be seen as having the eternal Truth close at hand from asexual birth to asexual rebirth.

Seen in another light, that of a benevolent God and of the impetus of creation toward Soul evolution, “The Law of One: The Ra Material” characterizes sexual dimorphism in humans as a catalyst to Soul evolution. Similarly, the human-Martian genetic alliance, which combines Bonobo-like, pacific personality traits with the aggressiveness found in Mars ‘service-to-self’ beings, is a catalyst to Soul evolution. This because it introduces disease and lesser life-span to the human equation; from this perspective, then, disease offers opportunities for accelerated Soul evolution; and disease is caused by a propensity to poor diet and poor exercise choices, which ramp up the presence of Mars ‘service to self’ bacteria in the body, and their influence on the human gut brain.

For more on catalysts to accelerated Soul evolution in the Earth polarity experiment, see …

ON COMMUNICATING WITH THE MARTIANS THAT COLONIZE OUR PHYSICAL BODIES

As to the ability of Martian (bacterial) colonies within our human form to communicate with us, the answer is: Yes, they can do this through telepathy. However, unless we first optimize our human vehicle through diet, eliminative techniques, pure water, and exercise, we will contact our Martian warrior foes rather than our Martian allies.

Looked at from an asexual reproductive standpoint, where all bacteria with a common ancestor are viewed as one Martian individual, there may be only a handful of Martians, whether ‘good’ or ‘bad’ in any one human body, and these might be the voices purporting to be representatives of our Martian colonies that are heard from time to time on the astral plane.

The lifespan of bacteria varies by type of bacterium. Some live only a few minutes or a few hours. Others live for a few years; see …

Some, trapped in a dormant state in rock salt, have been revived after 250 million years, according to the BBC; see …

The ability of bacteria to survive for such a long time in a dormant state may allow them to become space travelers. In point of fact, NASA proposes that this may be the case, and that the sort of alien beings found in a meteorite in 2011 might be related to the giant bacterium Titanospirillum velox. For more on this, see …

Well then, could it be that a race of Martian giants are those who are the space travel contingent of what may be a very diverse group of beings whose life line originated on Mars?

Bacteria specialized as space travelers might also have the ability to eat radiation; see …

This would facilitate interstellar explorations and possible colonization in other star systems. This method of space exploration is an elegant solution, as it utilizes systems already in place … such as the expectable movements of meteor showers and comets … for dispersal, rather than requiring internally produced fuel, such as rocket fuel, which is easily exhausted.

Compare the two cylindrical images below. One is of modern-day bacteria, and one of fossil structures resembling bacteria found in a meteorite …

There are talks about using the newly discovered cosmic-ray-eating bacteria to feed astronauts, or possibly to be genetically added to the human DNA, to allow human space exploration.

I request that the rights of Martians, as an alien species allied to us, be considered as part of the experimental design process. This planet has but two principles in design and purpose: These are the All, and Free Will. Let us not war on our allies, let us not attempt to control them, but rather to honor their Free Will in this decision-making process.

ON THE HUMAN BODY AS A PRIMATE-MARTIAN GENETIC COLLABORATION

Along the current line of scientific inquiry into addition of cosmic-ray-eating bacterial material into human genes for the sake of space exploration, I note the possibility that the introns of the human genome may represent a coalition of DNA template between the primate and primitive Martian colonists of Earth, which may have created the ever-evolving iterations of beings that led to the current human form …

In other words, the alliance of our long-ago ancestors with the Ancient Ones of Mars, may be the cause of rapid primate evolution. Our human form may have been, since very early days, part primate and part Martian …

For those who take this science fiction story to heart, and begin to consider whether it may or may not be true, the prospect of being a colony rather than a discrete individual may be a little daunting. This is because we of the Western world pride ourselves on our individuality, and prize, over all, our physical bodies. As we place our Awareness, on our individual self and our physical body, rather than on our social memory complex as a species, and our Souls and subtle bodies, we get, as it were, stuck in the ‘material rut’. We see no farther than ourselves.

In our telepathic talks with our Martian colonist allies, who do their best to keep their home, our physical bodies, in perfect working order, let us exercise diplomacy in the same way that they do. Let us treat them with the highest respect, as they do us. In this way our life on Earth will become more harmonious.

ON NEGOTIATING WITH ‘SERVICE TO SELF’ MARTIANS THAT COLONIZE THE HUMAN GASTROINTESTINAL TRACT, SO AS TO AVOID WARS OF AGGRESSION THAT DECIMATE OUR HUMAN SPECIES

Then, as to our Martian foes, those colonists of our bodies who lead us, through the dark, unaware under-realm of our gut brain, into unconsecrated wars against others of our species, for the sake of their own alliances with others who are ‘service to self’ … Let us look at this situation of war from their point of view … They want war. They also want to colonize human bodies, and to live in their gastrointestinal tracts, specifically in their feces. Hmm… I would say to them …

If there is a catastrophic war, say a world war, what will happen? Many human bodies will die, so there will be far less human bodies to colonize. This cannot be good, can it?

In this way I would speak to the Martians who are ‘service to self’, for the sake of the greater good, the All.

For the complete Martian Archives, see …

2 thoughts on “On Martian Bacteria: Good Martians and Bad Martians . by Alice B. Clagett *”